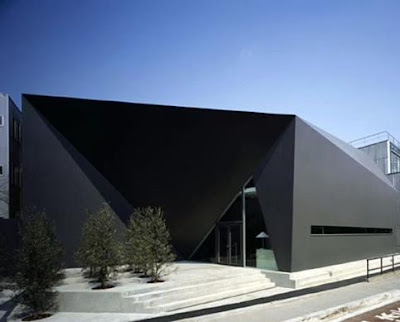 A few blocks from Omotesando Hills is an experimental project, which shows a new style, atypical of Tadao Ando's vocabulary. In fact, if I was not told this was a building by Tadao Ando, ​​I would have thought that was a project of Daniel Libeskind. 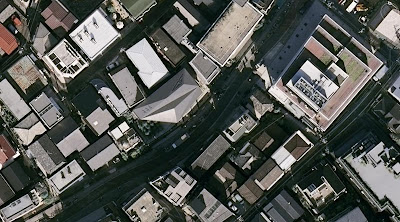 See location in Google Maps
The Japanese company hhstyle.com, an online reseller specialized in the distribution of furniture and housewares, was associated with two of the largest interior design companies in the world: Italian Armani Casa, from the famous Italian designer Giorgio Armani, dedicated to the line of home decor, and Boffi , specializing in bathrooms and kitchens. Thus hhstyle.com / Casa was born. 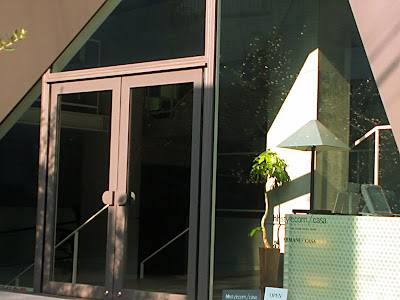 The owner of hhstyle.com, Takayuki Harada, a personal friend of the architect, commissioned the project of a new store to Tadao Ando, ​​and asked him to, preferably, to propose a building whose formal language would be different than that of his traditional projects .
Ando's response, which opened in 2005, could not be more striking. It is a steel structure, massive, angled, detached from the environment, completely introverted and almost intimidating. 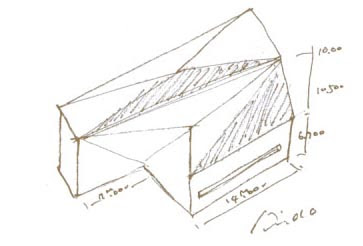 Some people have called it an "extravagant bunker" and critic Martin Webb has called it a "mammoth" that "stands in stark contrast to its neighbors in terms of surface texture, scale, color and contents". This unfriendly, alienating façade would be an attempt to keep a distance from school teenagers-who used to be the most frequent users in this area-, in search of a more sophisticated customer. 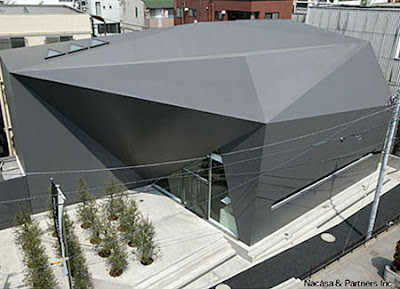 CONCEPT
The building is a dark metallic structure (instead of a concrete one, the usual Ando's signature), whose angular faces are folded like an origami. The layout, also differs from the rational geometry characteristic of Ando and becomes a much freer composition , including rotated elements and aggressive angles. This almost blind object does not face the street, in fact its only visual connection to the road is a thin horizontal slit. 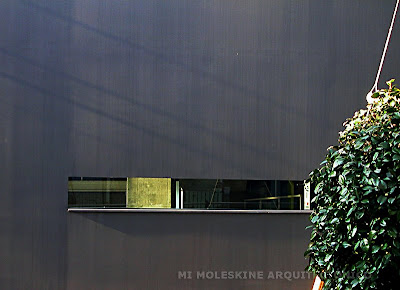 Instead, the building opens into a small square created by Ando and where he has planted a group of 16 Japanese olive trees. 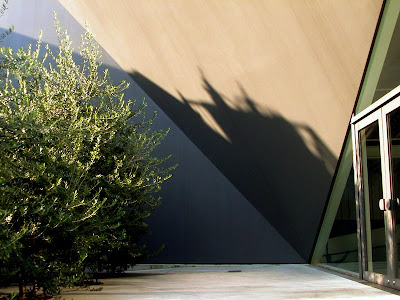 Details of the entrance and its relation to the square.

It is not the first time that Ando proposes on a dark, single volume instead of overlapping several geometries using concrete. Already in his installation Minamidera, in Naoshima, the architect had opted for a prism made of dark wood, inspired by the color of Japanese temples. But unlike the hhstyle.com store, in that abstraction was possible to recognize elements from the traditional Japanese architecture. 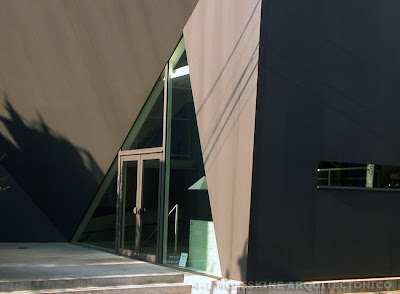 Perhaps the choice of material could be explained by the nature of the ownership of the property. In most cases Ando's buildings are built in places where the owners have the property of the land, so that the concrete is used to express the stability and permanence of its architecture. But in this case is an area of ​​352 m2 leased in two parts, one to 5 and another to 10 years. Therefore, it is more like a temporary pavilion than a permanent building, and consequently a metallic structure has the comparative advantages since it can be easily dismantled and removed. 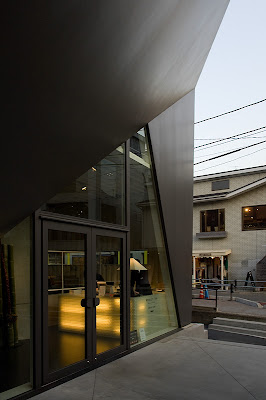 Details of the entrance. Compare with the surrounding architecture. Photo Courtesy of Liao Yusheng

The interior is composed of a series of sub spaces in various levels that try to offer visitors an exciting journey, aided by the dynamism of the folds of the walls and the ceiling. It gives the impression that the architect has sought, through an introverted project, to create a world apart, designed to distance the visitor from the external bustle outside and focus only on the exhibited merchandise. 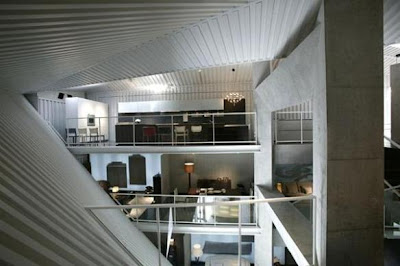 At the bottom are the Armani Casa collections, while at the top are the fine (and expensive) Boffi kitchens. 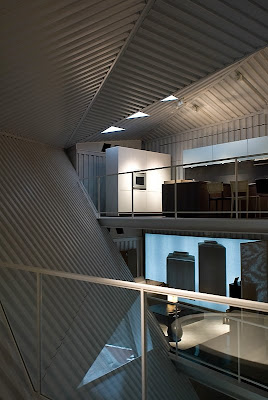 Intricate spatial arrangement offers a dynamic path. Photo Courtesy of Liao Yusheng
The spaces are located on two rotated bars, organized around the stairs and services located in the middle. High ceilings and balconies allow the space to be experienced and viewed from different angles. 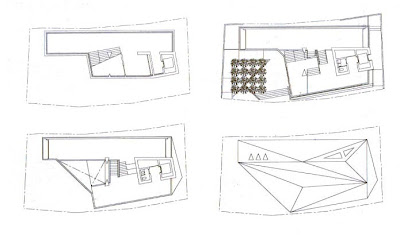 The interior finishing is opposite to the outside. If externally it is a smooth, dark metallic skin, inside it becomes corrugated and white. 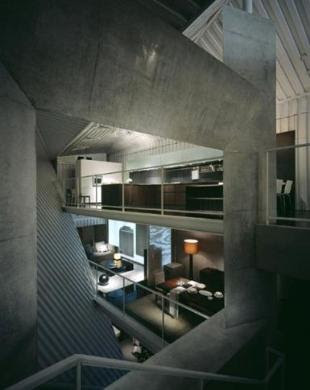 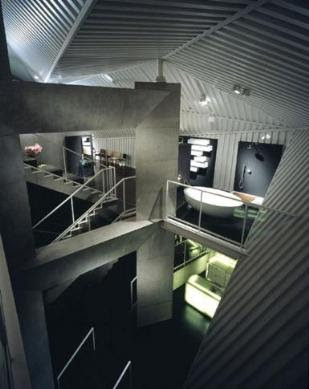 One of the things that caught my attention was the lack of natural light inside the room, because it only gets solar radiation through the thin horizontal slit in the front and the small triangular skylights on the roof. Although the interior is painted white, the place seemed to me a little dark. 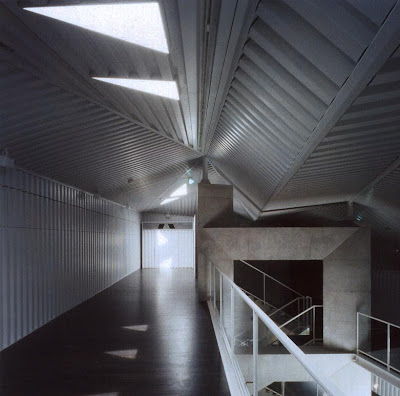 While it is true that Ando designs "from light to dark" as Philip Jodidio says, using the range of shadows to give it a mysterious, almost spiritual and theatrical atmosphere to his works, as in the case of Chichu Art Museum or the Church of the Light (which, paradoxically, is mostly dark) I do not know how convenient was to apply this criterion for designing a shop. In any case, the problem was solved using artificial lighting. 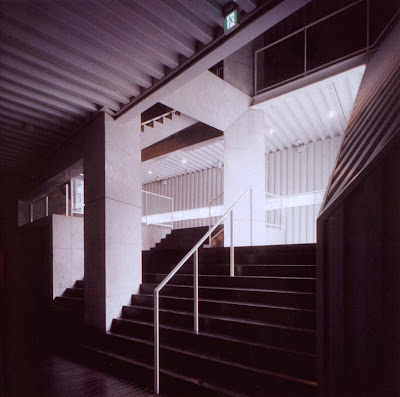 Another aspect to consider is the environmental conditioning. I visited this store in autumn, and the indoor temperature seemed mild, but I wonder if the metal box would become a furnace in summer and a refrigerator in winter. Of course, the interior temperature can be adjusted by using air conditioning or heating, but these methods are environmentally inefficient and increase maintenance costs. 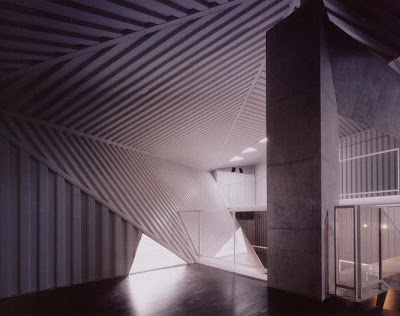 Unfortunately things have not gone well for this building. In 2007 the partnership with Armani and Boffi was dissolved and after a few months later the store was reopened as hhstyle.com / Limited, which, despite its name, a proposal intended to be less "limited" or exclusive. Still, in January 2008 it again closed and the last I heard is that the store was for rent. Unfortunately, with Japan's economy in recession, the fashion industry and design is one of the first to suffer the consequences. 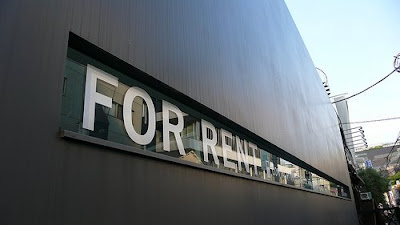 "For Rent" reads a sign in the narrow window of the building.
The photography is prohibited inside, so this video is as a very valuable document.

Where did Ando get this almost-deconstructivist style from? In fact, he has been experimenting with more dynamic forms in his latest projects. Such is the case of 21_21 DESIGN SIGHT, a small gallery, built in Tokyo Midtown as a place where Japanese design can be "discovered, promoted and shared." 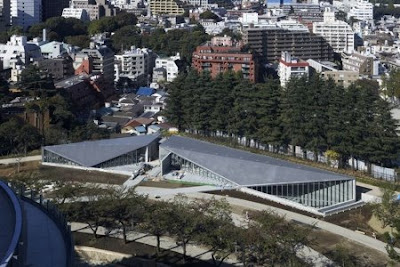 21_21 DESIGN SIGHT is located in front of the Suntory Art Museum, by Kengo Kuma. 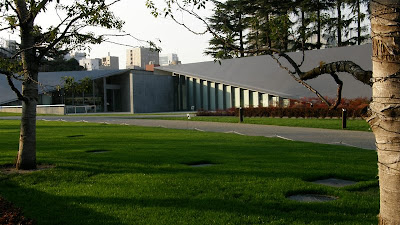 In this structure, despite being based on a clear geometry and the use of concrete, steel and metal, (Ando's preferred materials), the architect experiments with angular forms, in order to give more drama to the design. 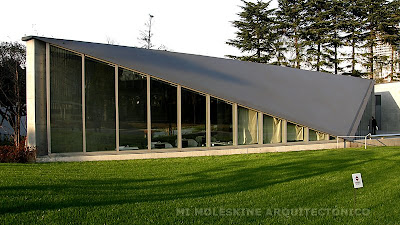 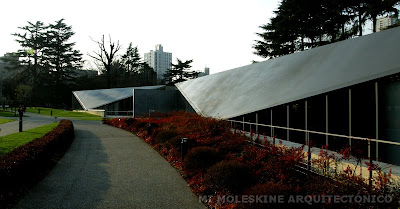 The roofs are powerfully buried on the soil, giving the impression that the building comes from the earth. This building stands on a level below the surface, in order to be used inside. 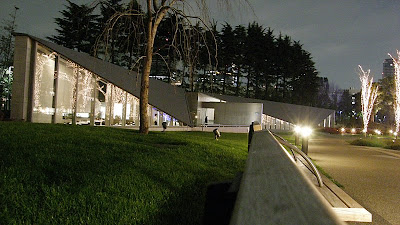 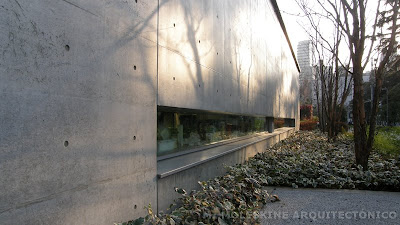 The horizontal slit that runs along the rear facade of the gallery is a direct predecessor to that used in hhstyle.com / Casa.

Well, I think every architect has the right to re-invent himself, especially if, like Ando, ​​he has been criticized to be too repetitive. Many great architects have made radical changes in their careers when they were in a mature age: Frank Lloyd Wright, Frank O. Gehry, Philip Johnson. I think it takes courage to abandon a style with which an artist feels comfortable to explore another radically different one. Ando probably soon will dominate this new style with the mastery of his old works, and maybe it will take us a while to get used to the new Ando. I think that in any case, his shop for hhstyle.com / CASA has been a first step (or stumble?) in that direction. 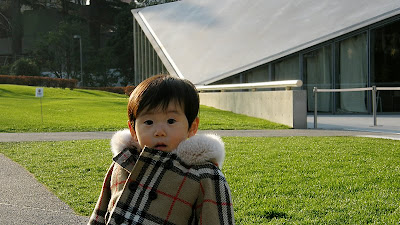 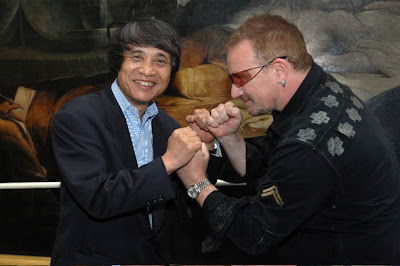 Bono, lead singer of U2, in a concert in Japan , publicly expressed his admiration for the architect of the Church of Light. Here, "boxing" with Ando. Judging by this latest design, it seems Bono hit Ando very hard.
Posted by Carlos Zeballos at 7:18 PM