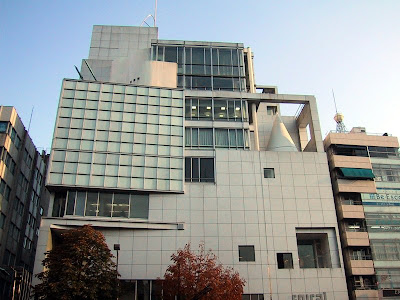 Fumihiko Maki is one of the most respected architects in Japan. Born in 1928, Maki studied and taught at Tokyo University and the School of Design at Harvard University. It is the majority shareholder of Maki and Associates and has designed projects in Japan, North America, South America, Asia and Europe. He was awarded the Gold Medal of the UIA, the Prize of the Architectural Institute of Japan and is he one of the five Japanese architects who hold the award Pritzker Prize (1993), along with Kenzo Tange (1987), Tadao Ando (1995) and SANAA (Sejima & Nishikawa) (2010).

"The architecture is similar to Japanese" emphasized in his closing speech at the World Architecture Congress entitled "Japanese Modernity: Language, Landscape and Convergence."The Japanese language is composed of two calligraphic systems: kanji or Chinese characters that represent ideograms, and kana, which are syllabic characters. Both types of writing are combined in the language, and according to Maki kanji represent a rational aspect of language while kana refers to an emotional aspect of it. Similarly, he proposed that the rational and the vernacular architecture coexist within the same territory and must establish an ongoing dialogue between the two of them. 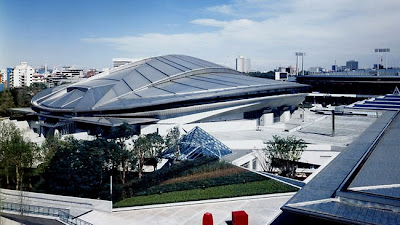 Tokyo Metropolitan Gymnasium. Fumihiko Maki.
Maki has written extensively, and his contributions have been one of the theoretical columns of the Metabolist Movement . However, his buildings are closer to eclecticism and deconstructivism than the typical forms of the Metabolist movement.

An example is the building that we review in this post, the Spiral Building, designed in 1985 for the lingerie company Walcoal, and that has become one of the best known works of Maki. 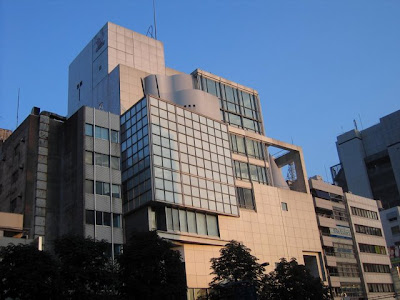 The building is located on Aoyama Street, one of the most important shopping districts of Tokyo. Opposite him is the sculptural Tower Ao Building and close to Dior by SANAA, Omotesando Hills by Tadao Ando, Gyre by MVRDV and the Headquarters of the Japanese Nursing Association, by Kisho Kurokawa . Spiral Building was one of the first icons that would give the character of Omotesando as an architectural mecca for fashion. 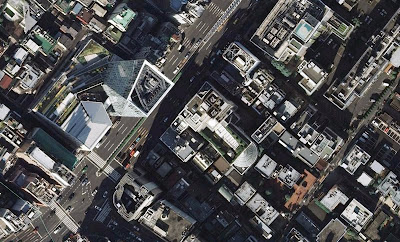 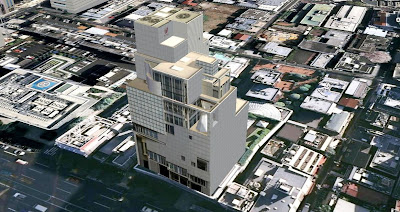 CONCEPT
As part of the concept of "fusion of art and life", Spiral Building combined the use of commercial functions (fashion shops, stores, restaurant, café, beauty salon) with cultural and artistic activities carried out in a multipurpose room (fashion shows, art and contemporary design exhibitions, theater, dance, concerts, etc.).

"In this building I wanted to represent the chaos of the city and for that purpose I took the typical elements of modern architecture, such as cube, cone and the hemisphere and combined them in an integral way." 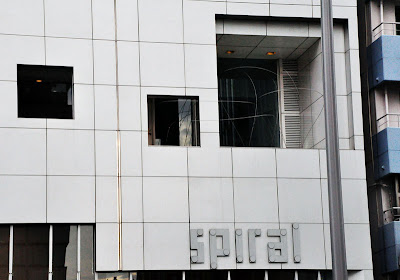 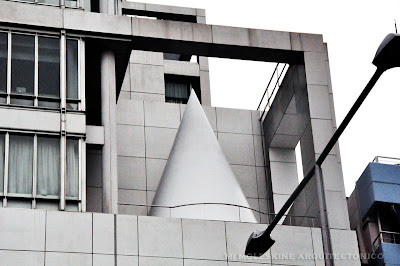 At first glance the building looks inspired by the architecture of Richard Meier: the color white, the use of overlapping patterns and geometric shapes, the aluminum finish panels among others and even the use of an undulating volume in the facade. Yet here the rigorous geometric and rationality of the American architect is not perceived. There is also a reference to Peter Eisenman (who later designed a shop in Tokyo, Koizumi Lighting Theater ), the deconstruction and re-composition of the design elements. But inside the building, the spatial complexity that other deconstructive works convey is also not perceived, but rather an orderly succession of spaces. 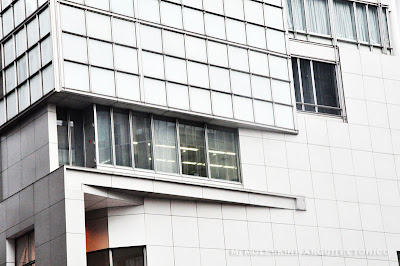 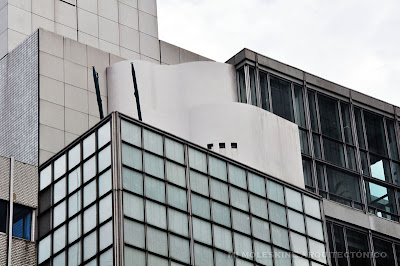 The first contact with the building is through a multi-height atrium that greets us, invitating visitors from the busy pedestrian sidewalk. 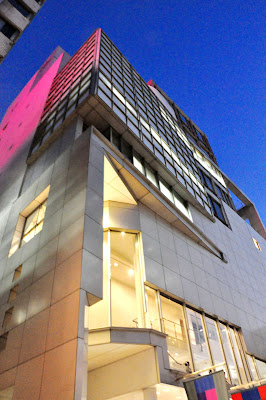 Upon entering we are received by a large space dominated by a café. To the right, a corridor leads to a series of platforms that are seen rising from the facade as a series of staggered windows, with no apparent function beyond housing some chairs to watch the street (where the Japanese feel to check their cell phones). 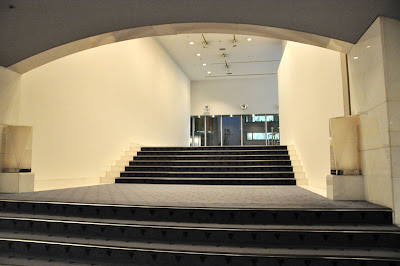 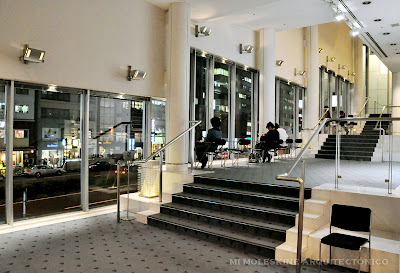 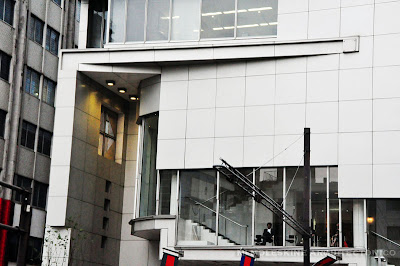 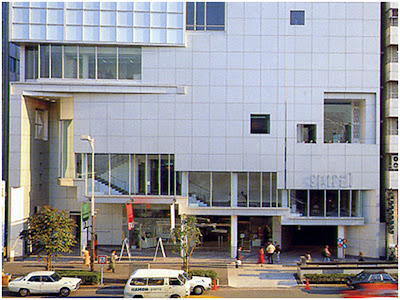 I find new references to Meier's architecture here, as the use of white cylindrical columns separated from the wall or the configuration of a double-height space. 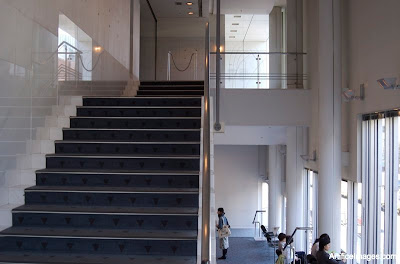 On the other side, next to the café area, another long corridor leads to the most important space, after which the building is named, a spiral ramp that is positioned under a glass hemisphere. The ramp is 15 m in diameter, and for the architect it represents self-improvement. 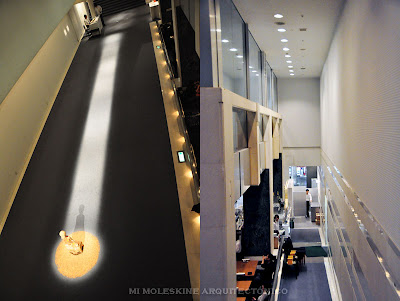 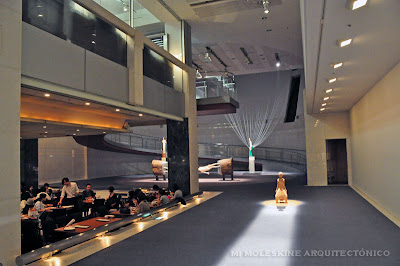 The cafe is in a depressed area, flanked by two tall multi-height space. 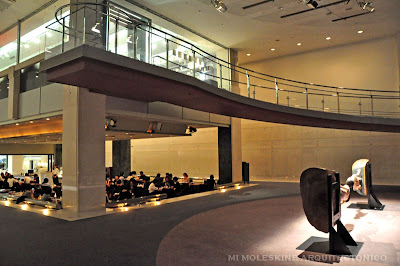 This feature reminds me of the ramp used by Tadao Ando at Benesse Art Museum in Naoshima,also crowned by a skylight. Richard Meier had also used a circular ramp, but otherwise in the High Museum in Atlanta . 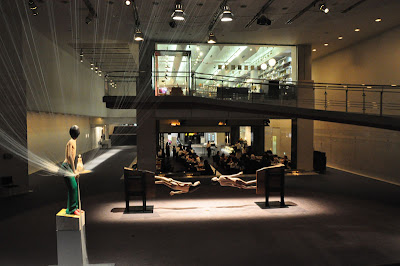 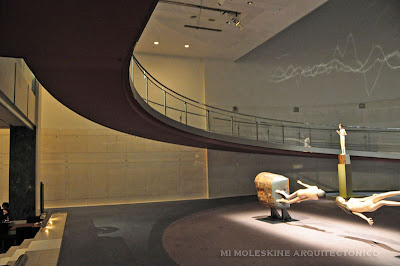 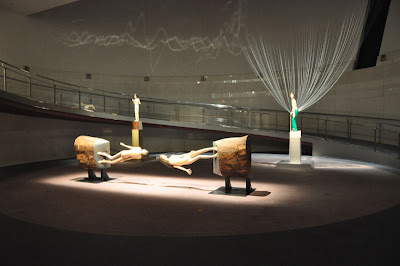 The center of the ramp frequently hosts many temporary exhibitions that can be appreciated three-dimentionally from above. During the visit to the building showed the wood work Koji Tanada , an artist specializing in wood carvings. Here is a sample of their work. 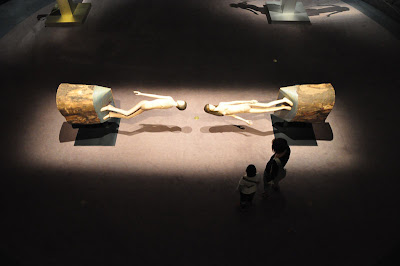 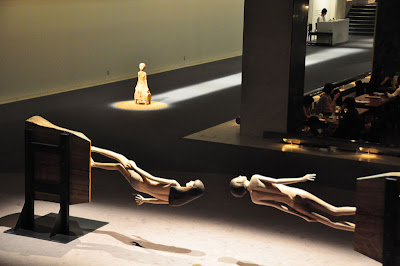 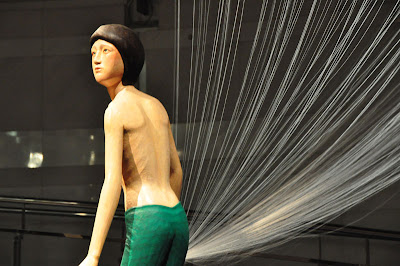 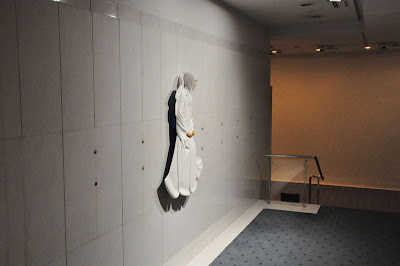 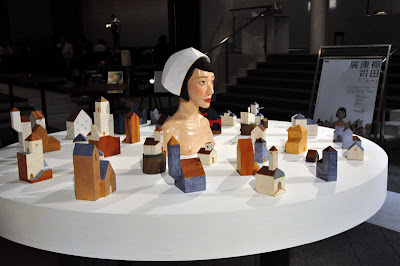 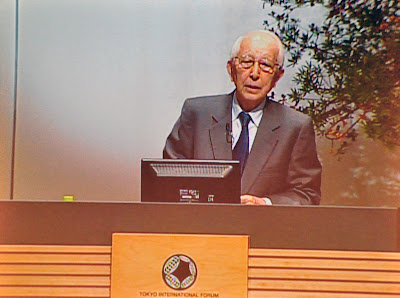 Fumihiko Maki at the closing of UIA Tokyo 2011, 24th World Congress of Architecture.
Posted by Carlos Zeballos at 7:31 PM