ESPAÑOL
Kisho Kurokawa's last major work, the National Art Center) (2007) in Tokyo, the largest art museum in Japan, is a contemporary intervention in a historic building, but a more radical approach than Tadao Ando's National Library for Children's Literature. Located near Tokyo Midtown, this arts center is an effort to inject some cultural character to the Roppongi commercial district. The museum is located in the extreme of a large park, and all the views of the glazed facade are oriented to see the greenery.
See location on Google Maps
Kurokawa, who gained recognition for his theories on Metabolism and later Symbiotic Architecture, proposed the remodeling of an old military building, completely covering his front with a waving modern and metal glass facade that completely hides any external feature of the old structure. 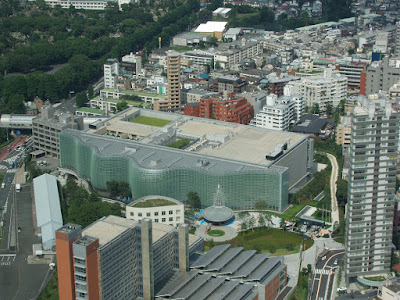 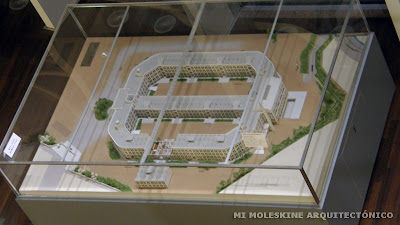 The curved form of the glazed facade, protected by horizontal metal blinds that give continuity to the surface, evoke the Kyoto Concert Hall, by Arata Isozaki, one of the first buildings reviewed in this moleskine. However, a more complex surface can be observed in the facade by Kurowaka, as it is defined by a continuous hyperbolic paraboloid surface establishing an undulating curtain that flirts with the broad esplanade in front of the building. 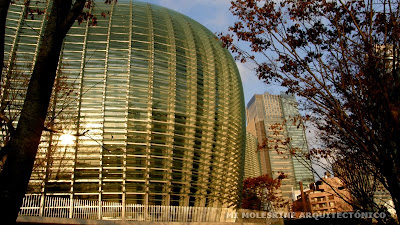 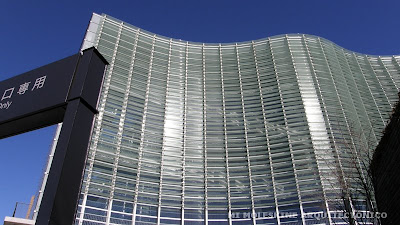 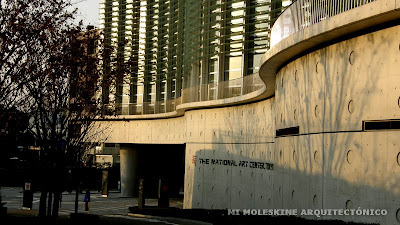 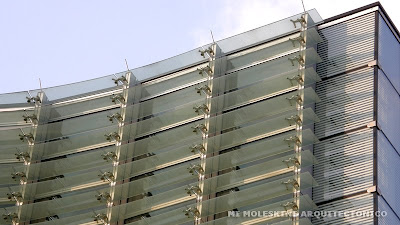 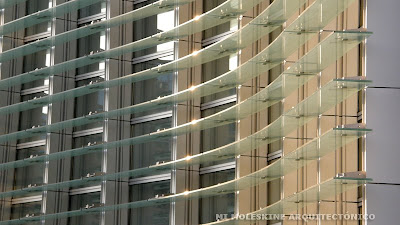 In reality, this giant curtain involves three conical volumes: an external cone at the entrance and two interior inverted cones that contain the cafés. Indeed, the access cone has an interesting scale effect, given by its height and shape, which leads inevitably to look up and find a suspended ring of lights that welcomes the visitor. 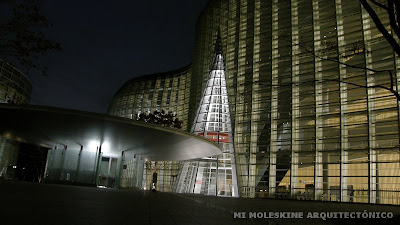 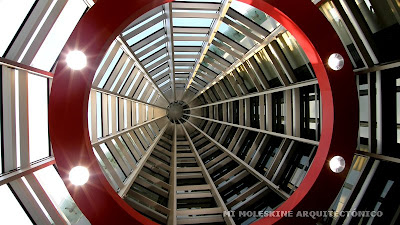 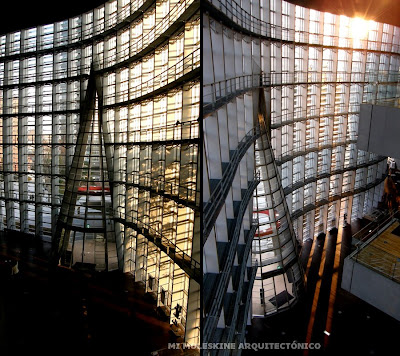 Once inside, is clear Kurokawa's intention to visually incorporate the external space within the building, creating a kind of inner square, whose imposing 6-level proportions and dynamic perspectives can be perceived from a series of bridges and balconies at different heights. 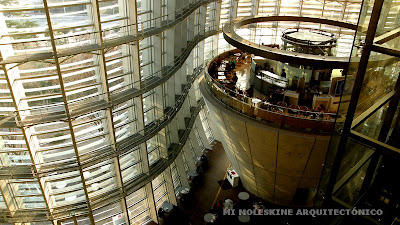 These unique restaurants transform the square into a powerful, lively space, and people flock to those for a coffee, or they just seat in a bench to take some rest while receiving the warm solar heat, which is very welcomed especially during winter afternoons. 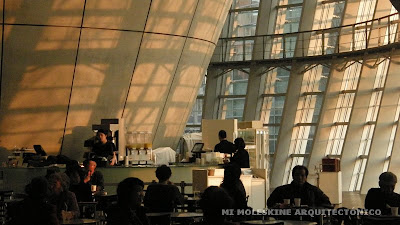 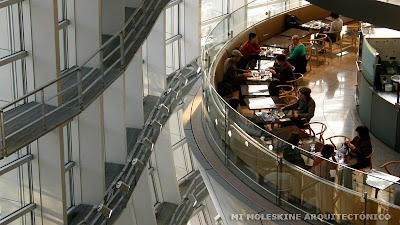 In contrast to this undulating glass wall, is the solid, orthogonal and massive wall of the original building, which has been coated with elegant wooden frame strips, a gesture reminiscent of traditional Japanese architecture, and a visual technique to add warmth into the space. 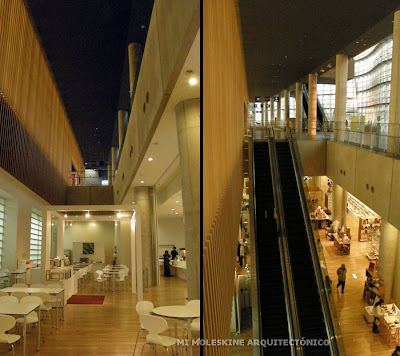 One of the characteristics of the museum is that it does not have a permanent collection, which gives freedom and flexibility to accommodate different styles and trends.
Kurokawa said:

"I see this new kind of museum, ... with no collection," Kurokawa explains, "as an artistic airport, where people get together to see images from all over the world, both actual and virtual. For this, we needed IT linking with optical fibers, but also we needed a huge space and more advanced facilities for handling the large volume of art that will pass through the museum. For this reason, I created a compact and mechanized automatic storage system beneath the museum. " 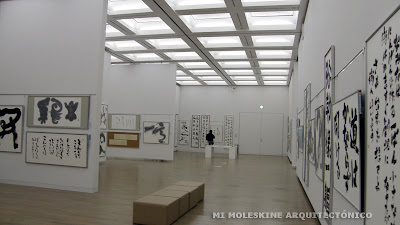 Indeed, this massive block houses nearly 13000 m2 of pillarless exhibition galleries, arranged in 6 levels and a basement. The galleries can be subdivided by a series of movable panels. It also accommodates a garden terrace, which is basically an array of bamboo plants, and also gives light to the interior. 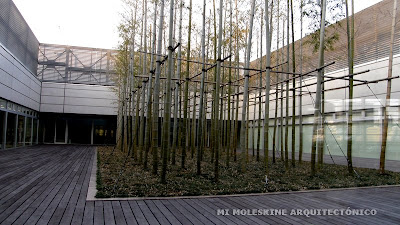 "One of my intentions with the design was to be fuzzy. Great art and architecture should be fuzzy. If it is easy to understand, it is functional like a factory. People can say, 'this is the entrance way, this is the exit.' But this is not art. I wanted to create ambiguity and a little bit of confusion. This is what makes people think, or takes them into a maze."

- OTHER WORKS BY KUROKAWA
- MUSEUMS 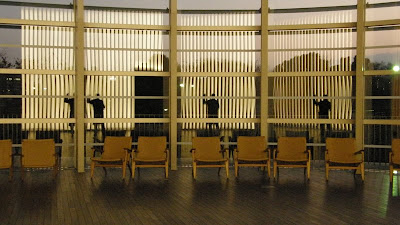 Posted by Carlos Zeballos at 12:30 PM