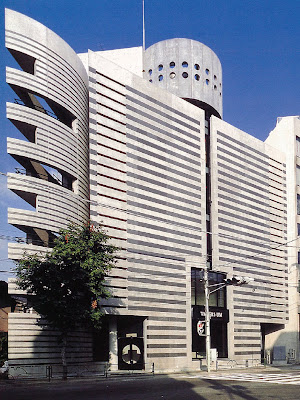 "In the Babel of ​​urban languages that changes daily, I wanted to test the"durability" of a strong, primary image, an architecture generated by the building's own inner logic ."
Mario Botta

Watari-Um is a small art gallery masterfully designed by architect Mario Botta in a difficult triangular site near Roppongi , Tokyo. The building houses a dynamic despite its apparent solidity and its severe facade. Since its construction between 1985-90 and despite its modest size, Watari-Um has become a landmark both in Tokyo's urban landscape of and the city's artistic culture.


Shikusho Watari was a woman in love with art. During her youth she toured around several museums rejoicing at the exhibitions, then dragging their children to visit various cultural installations. Her relentless passion first took up to create a small modern art store for a few years after engaging herself in an unusual venture: building her own museum in the area of ​​Harayuku, Tokyo. To this end, she hired the services of a renowned European architect: Mario Botta. 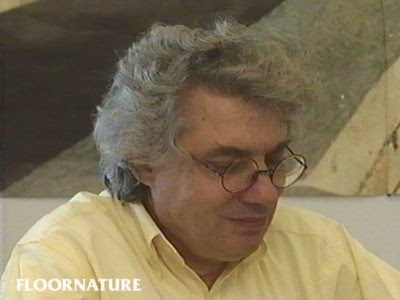 Botta, a Swiss architect born in Medrissio, studied architecture from when he was 15 years old, working with leading masters of modern architecture such as Le Corbusier , Louis Kahn and Carlo Scarpa, who decisively influenced his work. Since 1970, when he established his office in Lugano, Botta has been producing various high quality buildings worldwide. His work has received international recognition and has been several times a guest lecturer in Europe, Asia, North and South America. Mario Botta has played an important role in the revitalization of modern architecture, as opposed to formal exacerbations of some postmodernists.

Gallery Watari-Um is a building located on a difficult triangular lot of 160 m2 on the Olympic Boulevard, next to an anodyne, bulky tower a motley and chaotic urban context. 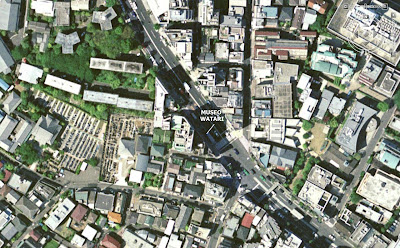 Urban context of the museum, located in a triangular corner.
See location on Google Maps 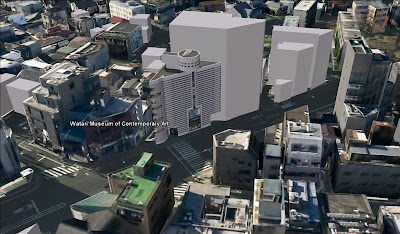 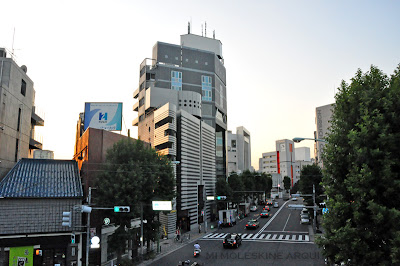 Irena Sakellaridou, among other authors, has emphasized the sense of permanence as the main message of the building, surrounded by an environment that is, by contrast, ephemeral and aggressive. To convey this image of strength, the Swiss architect combines pure forms, abstract geometry and extraordinary use of light, both in the interior lighting of the spaces as in the definition of exterior surfaces. 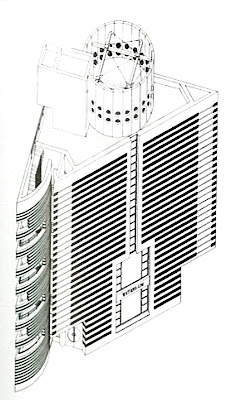 The volumetric composition is a lesson in urban architecture. The architect divides the facade into two elements: the corner and the plane of the facade. 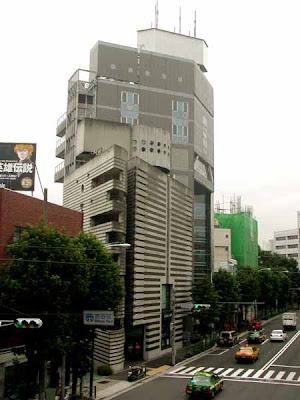 The first is a keel-shaped ladder which maintains one of its edges straight, aligned with the side street. 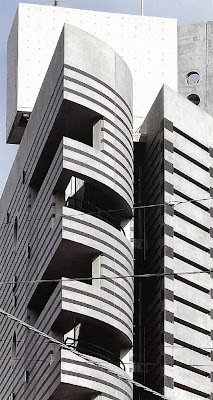 Detail of the staircase, photo courtesy of Pino Mosi 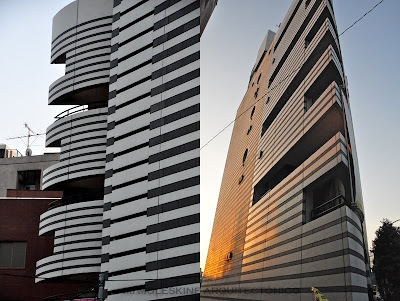 Both sides of the staircase 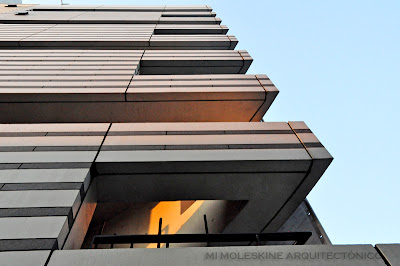 Towards the main avenue the staircase becomes curved, separating itself from the main volume and contrasting sharply with the sober orthogonality of the rest of the building. 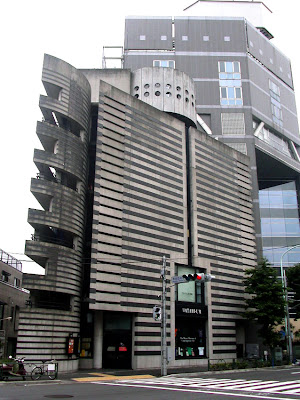 The separation of the staircase allows the facade to become a scenic screen of square proportions, a "mask" which is decorated with a series of alternating horizontal stripes made of concrete and granite. In this second element Botta takes one of the most used features in his vocabulary: the symmetry. 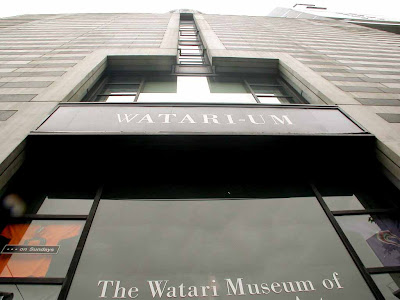 Both bottom corners are subtracted to accommodate the access to the building, and a central vertical slit compensates the horizontality of the stripes that adorn the wall. Personally, I find similarities between the composition of the long window and the elements of classical columns (base, shaft and capital). Indeed, by way of capital Botta crowned the elongated aperture with a cylindrical volume hovering over the facade. 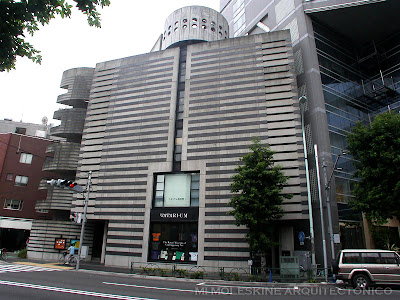 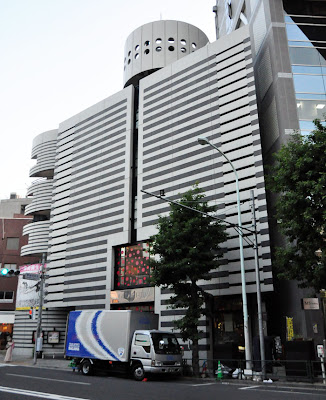 These two photographs are separated by 8 years. Surprisingly, the most recent one is the second. It appears that the Watari-um has been given a good gloss and polish.


To give a sense of lightness, two rows of small circular holes have been bored into the cylinder at the top. 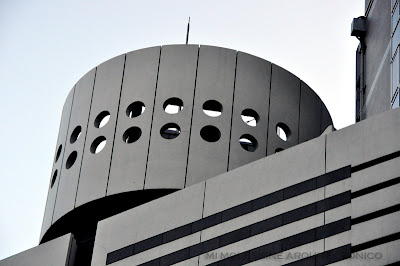 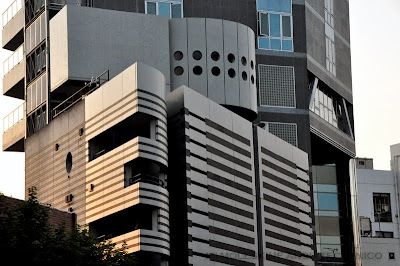 The corners of the triangle, given their sharpness, do not allow any development convenient function, so they are used by the architect as indirect light wells, also providing an effect of lightness to the facade. 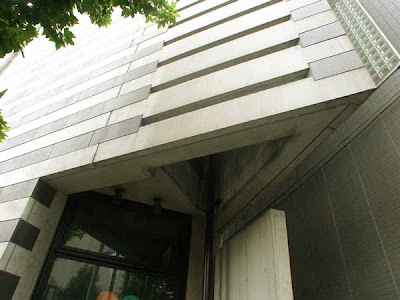 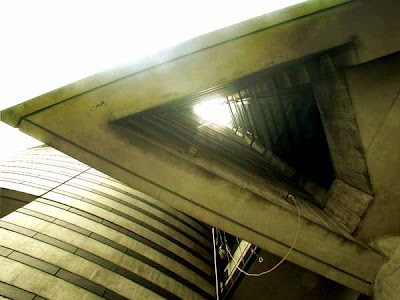 In addition, Botta has camouflaged light slots between horizontal bands, that add interesting lighting effects to the interior of the building. 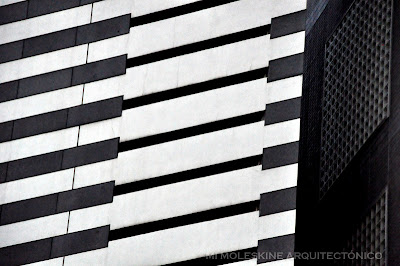 Every detail has been carefully studied, as is the case of this door, where the Swiss architect uses again pure geometric forms. The square and the circle come together in a simple but clear composition, further strengthening its purity with the metallic material. 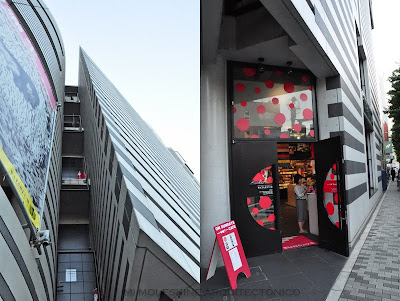 Inside, the building is organized freely around a cylinder containing the box lifts. 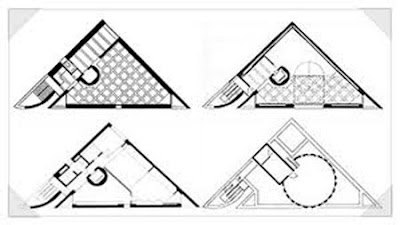 Upon entering, the visitor is greeted by a shop and bookstore, which extends to the basement. 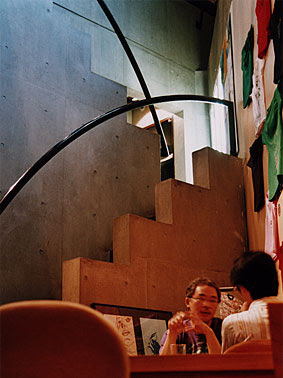 Inside the museum, shop area, details of the ladder.
Photo courtesy of Um Watari

A small cafe overlooks the bookstore, affording a greater feeling of openness to the space. 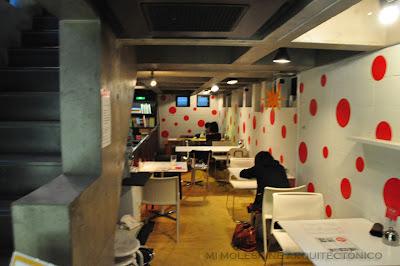 The small cafe, now infected with smallpox due to Yayoi Kusama's exhibition. To the left is a small balcony from where you can enjoy a view of the library.

The exhibition rooms are located in the second, third and fourth floors, while the top floor contains the offices and the residence of the owners. The space is so small that the galleries must be accessed by lift, the staircase in the corner is used only for emergencies. 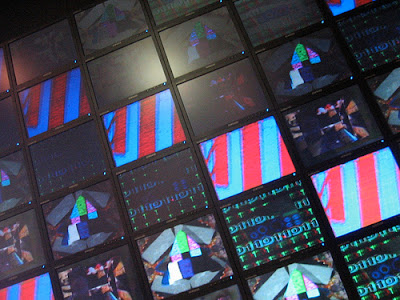 From a cultural standpoint, the Watari-Um Museum has an ongoing participation in the dissemination of contemporary art among its most diverse genres. 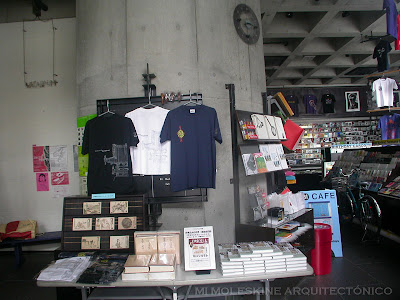 On my first visit, they were exhibiting sample of T-shirts from around the world as well as photography, sculpture and more. 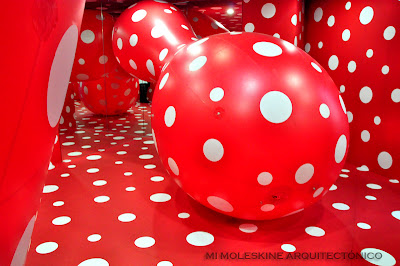 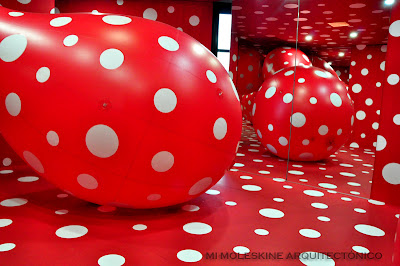 Eight years later I returned to the Watari-um, and found a retrospective exhibition of the art of Yayoi Kusama in the 60's.


From the urban and architectural point of view, and using the words of Mario Botta, the building "emerges as a Romanesque church in the midst of the great confusion and the diversity that surrounds it" 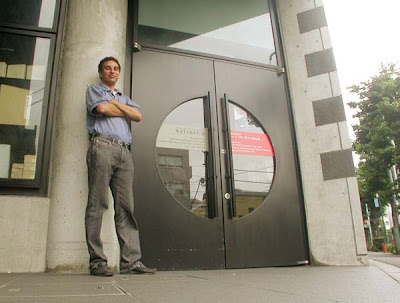 Posted by Carlos Zeballos at 12:03 PM