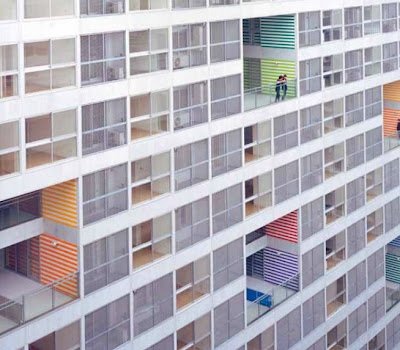 ESPAÑOL
Shinonome Canal Court is a remarkable experimental multifamily housing project in Tokyo, aimed at revitalizing the role of housing in the XXI century society, and at the same time renewing the Japanese capital's waterfront. To this end, the project featured the participation of renowned architects such as Kengo Kuma , Toyo Ito among others. 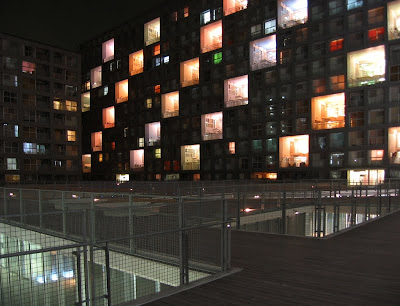 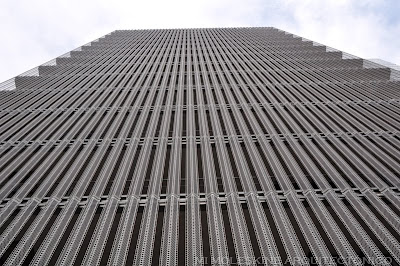 OVERVIEW
The participation of notable architects in the design of residential complexes has not been very common in Japan in recent years, as they have been in the hands of government bureaucrats who merely repeated low quality housing prototypes throughout the country with many social, functional and aesthetic shortcomings.
In fact, since Nexus World in Fukuoka in 1991 there had not been another case of experimental multi-family housing designed by a group of famous architects. However, unlike the Nexus (where the plan by Arata Isozaki lacked a strong idea that linked the various buildings and where each architect designed his unit with no relation to the others and in the style that he thought best), in the case of Shinonome the residential blocks are linked by a clear urban design and maintain a homogeneous formal language despite their differences. 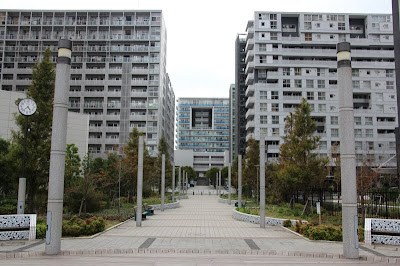 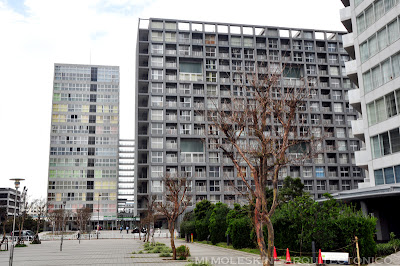 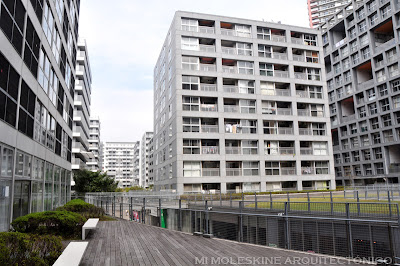 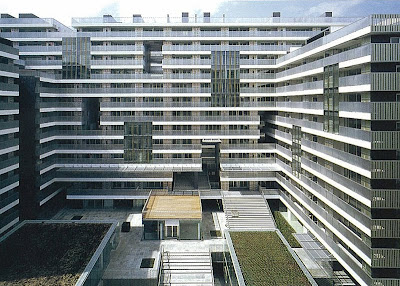 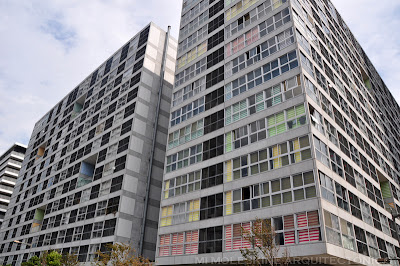 The main idea is based on a type of housing that is flexible enough to accommodate small offices and home offices ( SOHOs) and thus include economic activities (which are often absent in many residential complexes) to improve the social relations of its inhabitants as well as adjusting to their current lifestyles. The complex should be flexible enough to accommodate family units, housing for singles or for the elderly. 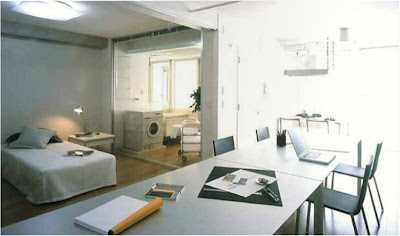 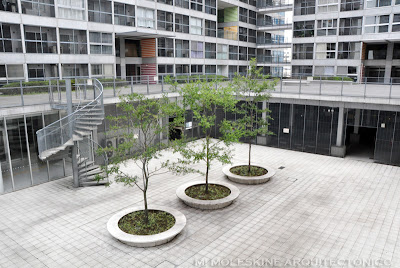 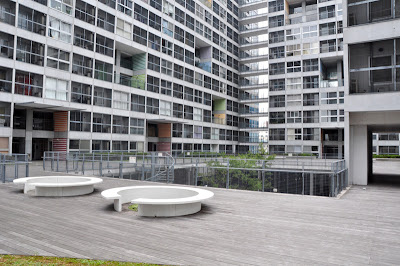 LOCATION
Shinonome is located on an area reclaimed from the sea, in Tokyo Bay. Despite being away from the bustle of the capital, this area enjoys very good connection with the heart of Tokyo. It is possible to reach the Ginza commercial district and the Imperial Palace in about an hour walking or 10 minutes by train. 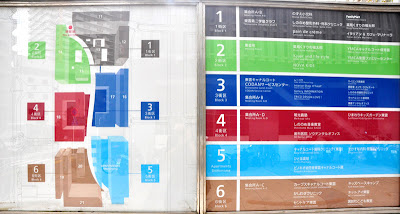 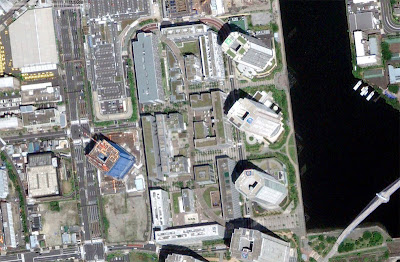 See location on Google Maps
The complex consists of six blocks around a central space, arranged in a rectangular block of 16.4 hectares, and surrounded by high density towers. It is possible to see and have contact with a waterway nearby. 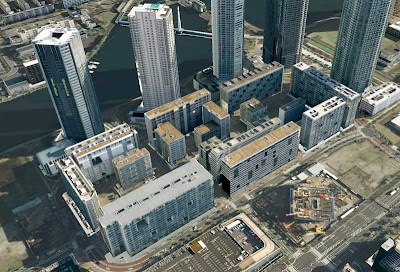 CONCEPT
The projected 2000 units are allocated in 6 blocks of up to 14 levels. They are linked by a winding main street that connects at its ends a supermarket and a riverside park, and links to shops, services, a kindergarten, playgrounds, etc. 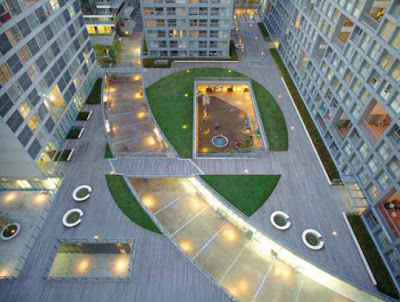 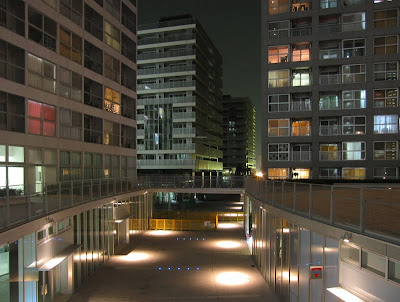 At the same time it relates to public areas and terraces located in both the first and the second level. 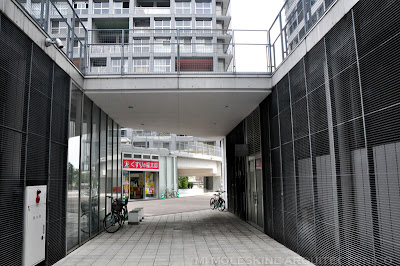 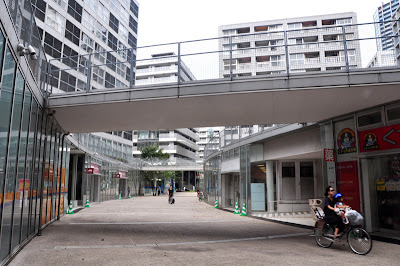 Sequence of the central street
Through these public spaces located in buildings is possible to establish a network of social relations among the inhabitants. In other words, the architects proposed a scheme opposite to Kisho Kurokawa and his idea that people should live in capsules, but rather break the limits of individuality and promote the socialization of housing at levels rarely seen in Japan. 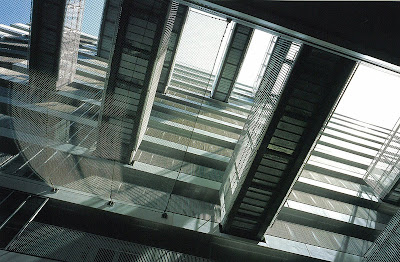 How to achieve this? Through transparency, used as a premise in the projects. The facades are hollowed to accommodate common areas where the level of privacy can be adjusted with movable wood panels, decorated with colored stripped lines. 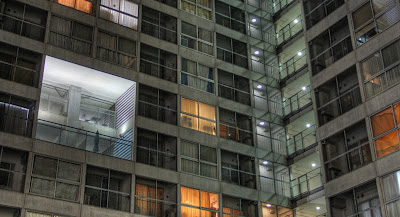 Many of the units have fully glazed doors and face spaces that allow interaction with their neighbors. This may look awkward for a traditional house, but not for a small office, home office or SOHO, establishing a transitional space between public and private areas. 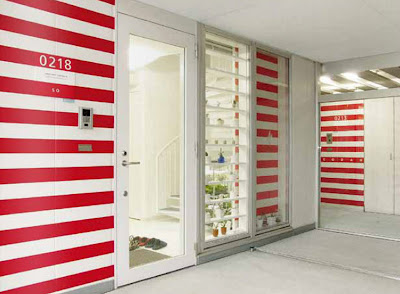 An unusual aspect is that the houses are at the same level of the corridors, allowing them to be used with or without shoes (traditionally houses are located one step above the public circulation, and they are provided with a small space to leave the shoes before entering the apartment). 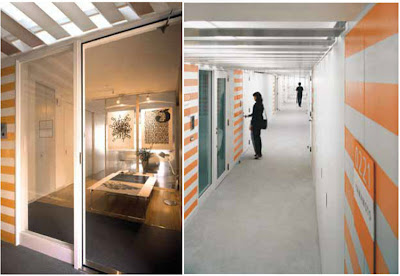 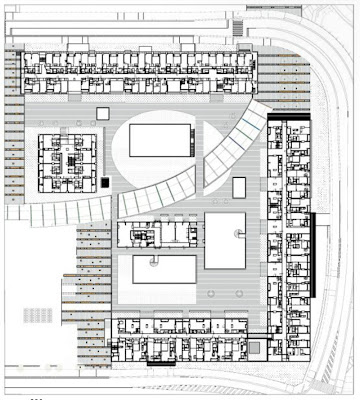 Plant the second level of blocks designed by Toyo Ito. 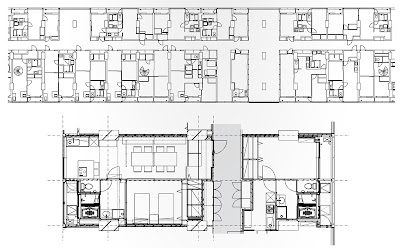 Blocks designed by Riken Yamamoto, organized along a central passage, but with the use of glass doors more light is allowed in each of the units.
Kengo Kuma's proposal, for example, links main units of 60 m2 to 25 m2 attached units (which can be used as bedrooms, studies, offices, etc..). These units are arranged around a central atrium. 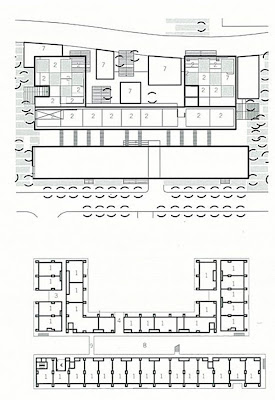 Kuma also incorporates roof gardens, a gesture that evokes Le Corbusier's Unités d'habitation, but that adds an economic value: they can be used to grow vegetables. Every few homes a communal space is generated and the architect proposes a network of bridges that allows communication between the units. 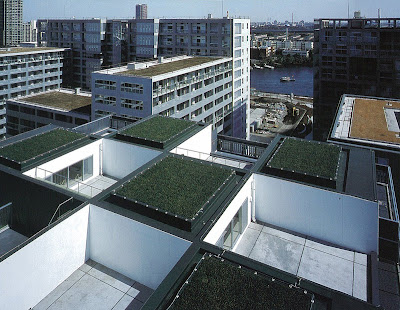 In the case of Yamamoto's project, he proposed a "room-F" or foyer, which can be used as working area and can be accessed directly from passages located eccentrically. 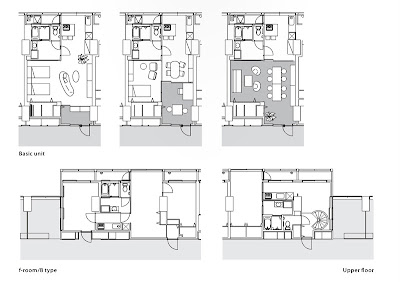 Riken Yamamoto. Variations of the type of residence to suit the conditions and lifestyles of each family. Bathrooms and kitchens are located towards the back of the apartments, receiving good insolation, while social areas are arranged directly at the entrance area.

Although the project was completed in 2004 and is a bit early to decide whether a is successful, it is possible to distinguish a higher level of social activity than in other residential complexes in Japan, and definitely will contribute to the discussion on the issue of multifamily housing in our time. 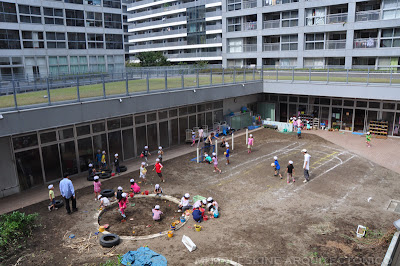 Children playing in the nursery.
Posted by Carlos Zeballos at 12:18 PM