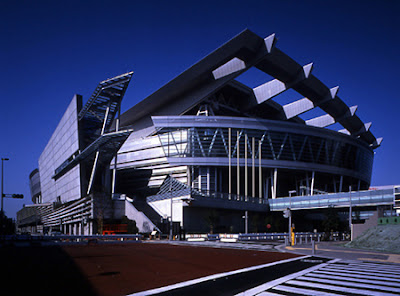 
Architects have been experimenting with the idea of mobile architecture -whose components can be arranged according to the user's changing needs- over the last decades with interesting results. Back in the '60s Kisho Kurokawa, among others, proposed his theory of Metabolism, in which parts or components, integrated into an urban or architectural unit, could be modified in an extensible structured system.

The Saitama Super Arena (2000) also has the ability to become flexible, but a much larger scale. It is located in the suburbs of Tokyo, and it is a building that can function as a 37,000-seat stadium, a 22,000-seat arena or a 5,000-seat concert hall. The transformation from one function to another takes only 20 minutes, and it is possible by moving a giant retractable structure of 15,000 tons and 41.5 meters in height across a distance of 70 meters, moving around 9000 seats along with it. But not only seats are displaced but also bathrooms, hallways, offices and various facilities that fit perfectly for the chosen function. 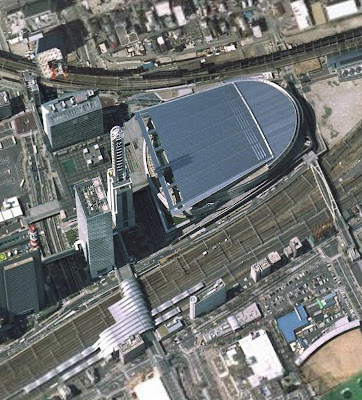 The building is designed to accommodate different events simultaneously, such as concerts, exhibitions and sporting events. Moreover, the height of the roof panels can be adjusted according to the acoustic requirements of every event at a particular time. This mobile structure is remarkable given the safety that this kind of building should offer, especially in seismic zone like Japan.

This impressive "Transformer-Stadium" was designed by the renowned team of Nikken Sekkei office in partnership with the nearly century-old U.S. company Ellerbe Becket and Flack + Kurtz Consulting Engineers. The building has won several awards due to its high quality and technological innovation. 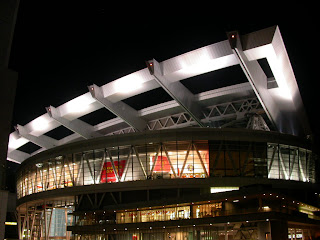 The front of the venue helps to give the building a monumental and spectacular scale.  The curved and glazed facade, which provides plenty of light to the building during the day and turns it into a glow spot by night, is composed of two bodies: a monumental atrium that opens onto a courtyard reception, which also communicates with the Saitama railway station via a bridge. 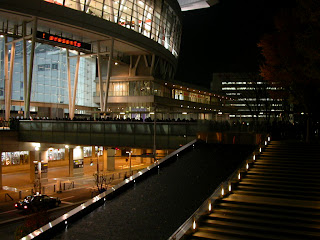 Above it, resembling a flying saucer, there is another cylindrical glass volume which contains gyms and other facilities, supported by a series of columns in "V" shape. 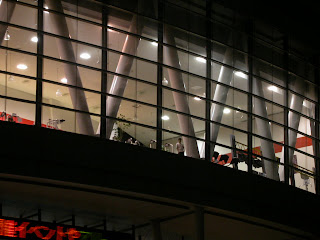 A fan like structure, located more than 60 m above the ground, crowns the building while emphasizes the effect of welcome to the visitor. 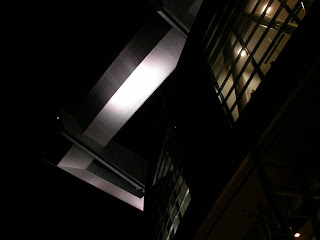 However, the design includes elements that compensate this monumentality, giving the Saitama Super Arena a more human scale. Adjacent to the facade lies the John Lennon Museum, a two-story building that houses a collection of the famous ex-Beatle, donated by his widow, the Japanese Yoko Ono. It may seem strange, but this is the first (and only) John Lennon museum in the world. 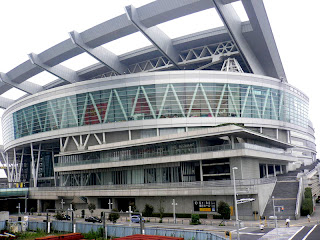 In short, the building's High Tech aesthetic prioritizes metal and glass, while meeting a demanding and flexible multi-functionality.

Well, I must admit that my visit to this huge building was accidental and not planned, thanks to an enthusiastic invitation from my friend Giancarlo who convinced me to come here to enjoy a concert by U2.

The concert was excellent, but I think I should leave Giancarlo the task to post about the details, as I am sure he can more accurately portray the concert of the famous Irish group, with the feverish excitement and euphoria that surely must still be dripping by his pores. 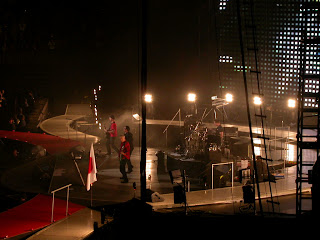 I would just like to emphasize a quote from Bono in concert.

"Yesterday we had a wonderful experience while visiting the Church of Light, which was designed by a famous architect, not only here in Japan but around the world: Mr. Tadao Ando..." 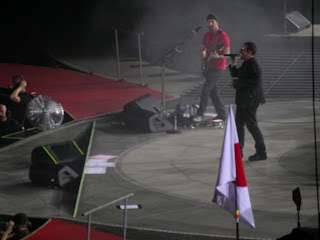 Then he dedicated him the song "City of Blinding Lights".

And it's so unusual to talk about architecture in a rock concert!

Posted by Carlos Zeballos at 1:34 PM