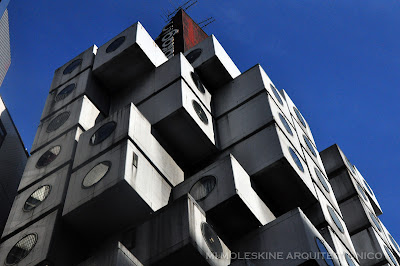 ESPAÑOL
Perhaps the most emblematic building of the Metabolist Movement is the Nakagin Capsule Tower, designed by Kisho Kurokawa in 1970 and built in just one year. The Nakagin was the first building of its kind in the world and greatly influenced the architecture Capsule-hotels, which are common in Japan. However, lack of maintenance and obsolescence of the building have caused a debate between the ones who wish to preserve this icon of Tokyo urban landscape and those who want to tear it down to build a new tower for its occupants. 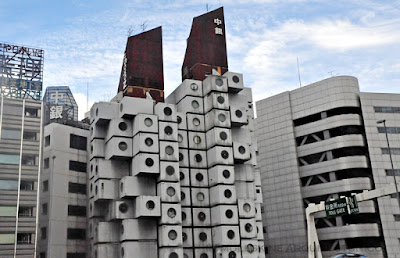 BACKGROUND
In 1970 the World Expo was held in Osaka , a place where Metabolist ideas were largely embodied in various fields. Torizo Watanabe, president of the Real Estate Nakagin Co. in Tokyo visited the Expo and was very impressed by the Takara Beautilion, designed by Kurokawa . He then proposed to the architect to design a new type of housing building with permanent capsules for those who have already a house in the suburbs but would like to have a place to stay in the center of Tokyo. Kurokawa gladly accepted the idea and called it "housing for the Homo-movens: people in motion." 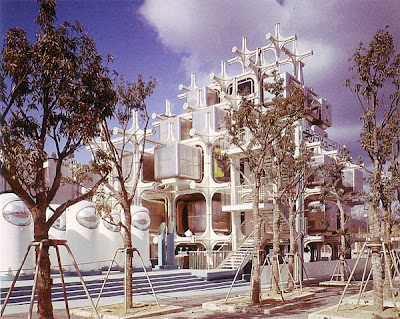 Takara Beautilion, by Kisho Kurokawa in EXPO Osaka 70
LOCATION
Nakagin Capsule Tower is located in Ginza, a shopping area in the heart of Tokyo. Note that in these area the price of land is very expensive, and far exceeds the price of the building itself (sometimes up to 90% of the total price). 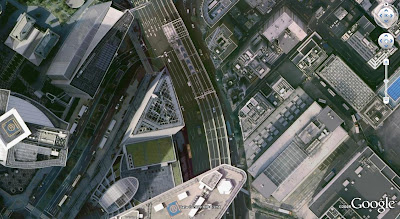 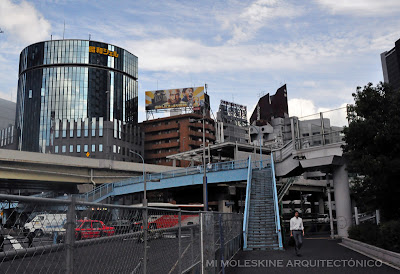 THE PROPOSAL
Kurokawa's project was a bit more ambitious than the one that was actually built, and consisted of two towers housing the capsules, that could be growing organically according to future needs, according to Metabolist principles. 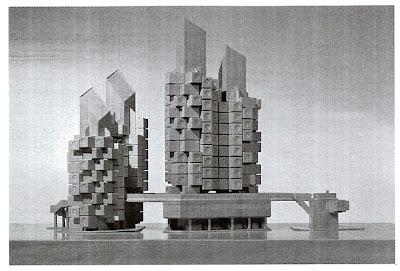 The original design proposed two towers linked by a bridge.

The buildings consisted of two components: a mega-structure of reinforced concrete containing the elevators, stairs as well as bridges that interconnect to other buildings, and the capsules, which would anchor the structure in just 4 points for easy replacement every 25 years. 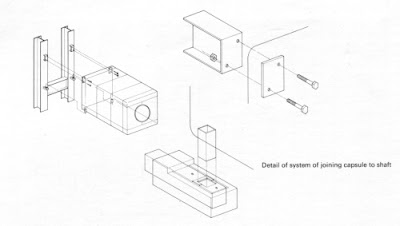 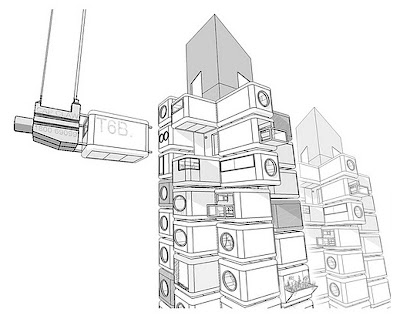 Each capsule measures 2.3 x 3.8 x 2.1 m and it was built with lightweight steel panels (the same used in cargo shipping containers). The units were prefabricated and then assembled in situ. 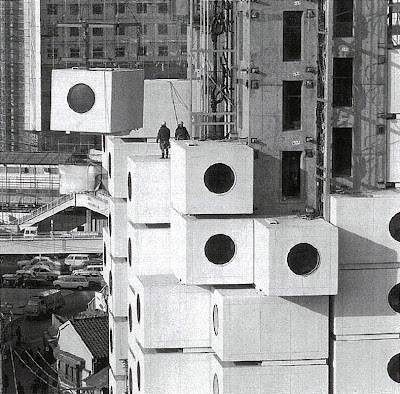 In its 14-story tower 144 units were housed and are arranged randomly to emphasize their assemblable character. 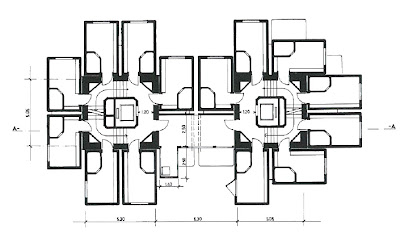 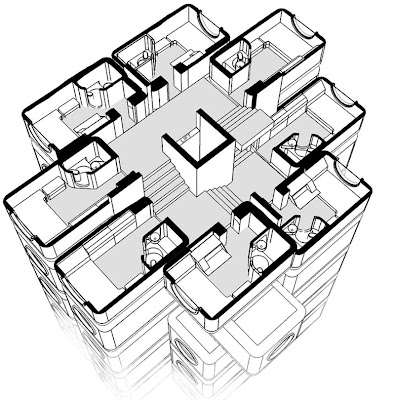 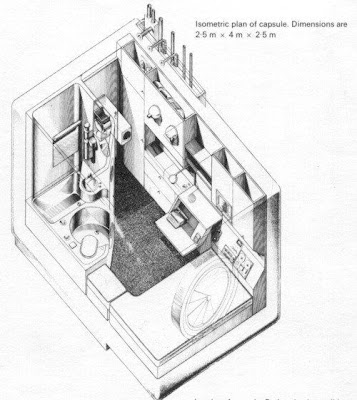 The cabins were designed to accommodate individuals, but could be articulated with each other to accommodate families. In addition to furniture a built-in audio, television and telephone were included, with all the comforts that the technology allowed at that time. 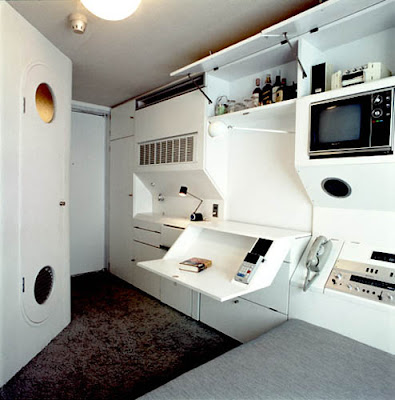 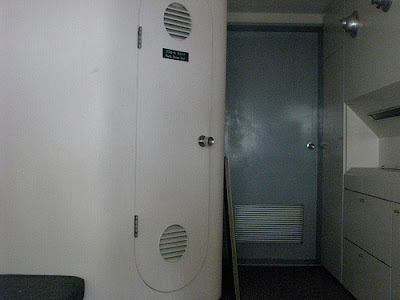 Photos courtesy of pict u re
DETERIORATION
After the Nakagin Tower was completed, it received national acclaim and much international interest, as it was the first building of its kind to be built in the world. Kurokawa thought this would be the beginning of a new era in architecture. 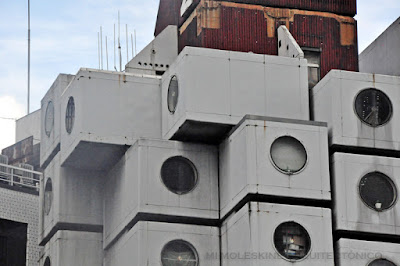 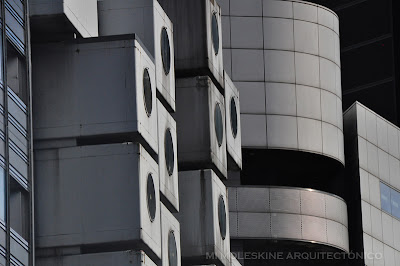 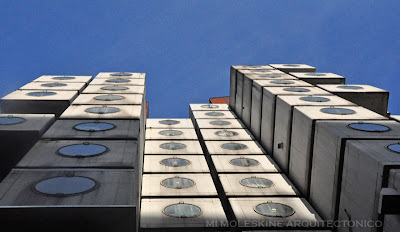 However, with the advent of new ideas, particularly Postmodernism, Metabolist ideas quickly lost their momentum. 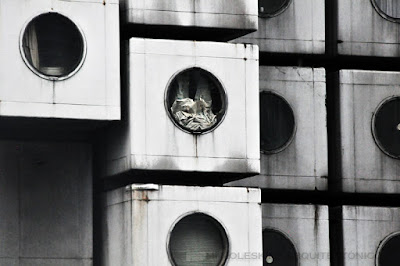 Moreover, the building has serious functional disadvantages, such as little flexibility and a huge loss of area in an zone where, as we said, the value of the property is very high. Kurokawa proposed to renew of the capsules every 25 years, but in reality given the price and growth of Japanese cities, entire buildings are being demolished at the same period of time.
DoCoMoMo, the international organization for the documentation and preservation of modern architecture has declared this building as architectural heritage and has made ​​unsuccessful efforts to nominate this tower to the World Heritage Committee for consideration, since it is one of the most innovative building experiments during the post-war. Many institutions, including the Japan Society of Architects have called for its restoration and preservation. 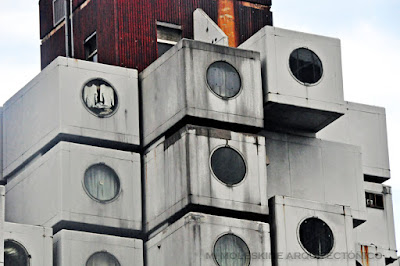 Although these units were intended to be replaced, they have not been changed in almost 40 years, so a visible deterioration can be seen. In addition to a not very welcoming fauna lodging in the cracks of the capsules, there are leaks in the water and sewage facilities and pollution from asbestos-containing parts. Not to mention that the area of the capsules is minuscule compared the neighboring buildings. The audio and television equipment at the time avant-garde has become obsolete (can you imagine you watch TV on a TV from the 70s?).
For all these reasons this building has been scheduled for demolition, to be replaced by a 14 story tower that intents to provide 60% of more area to each apartment. 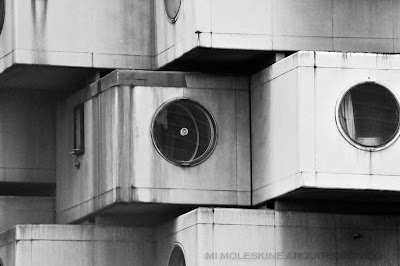 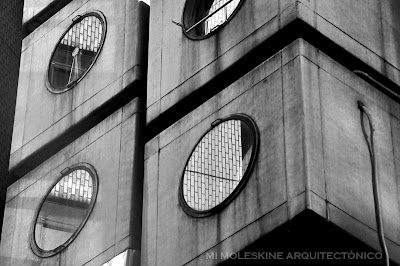 The Nakagin Capsule Tower is one of the landmarks of Tokyo and perhaps Japan itself. For many, it is worth retaining in memory of master Kurokawa, who died recently . But I would bet that among those in favor of preservation, no one would dare to live there. 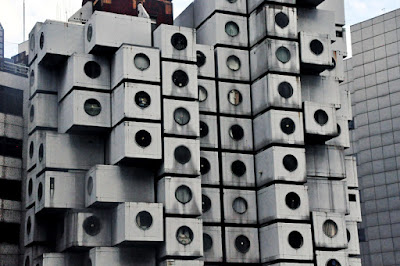 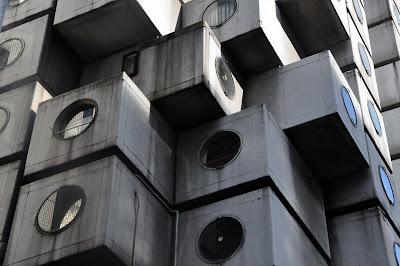 The following video shows the positions of both architects and academics as some residents on this building and its controversial conservation.
UPDATE

The pictures shown below would give a clearer idea of ​​the original design, since it is impossible for the public to access the existing building. 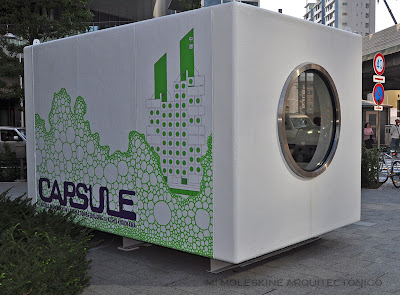 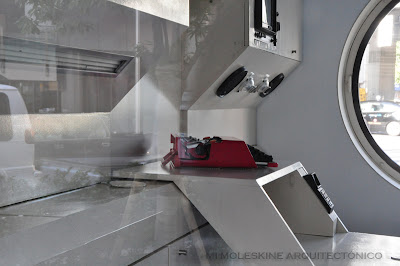 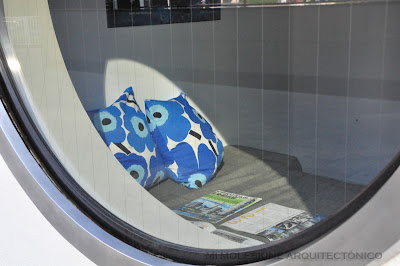 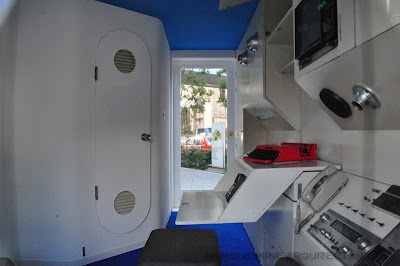 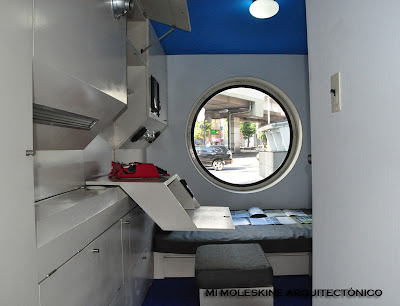 Will expand more on our next post on the Metabolist Movement.
Posted by Carlos Zeballos at 2:50 PM