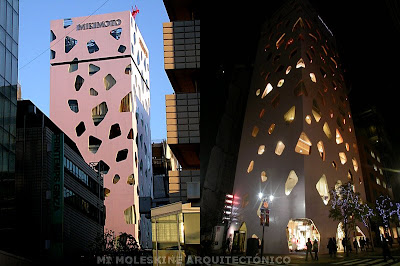 
Ginza, literally means "place of silver" and has been a commercial district of Tokyo from the Edo period in the early seventeenth century. Today, Ginza is home to numerous boutiques and fashion stores of the world's most exclusive brands and has a remarkable density of buildings designed by famous architects. Here you can find the Maison Hermes by Renzo Piano the Dior store Kumiko Inui and De Beers store, by Jun Mitsui. Not far from there is the Tokyo International Forum by Rafael Vinoly . 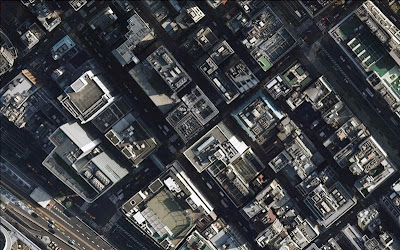 In the corner of Maronie St.and Namiki St. the famous Mikimoto Pearls company installed since 1893 , and after 110 years a new building designed by Toyo Ito was constructed on the same site. It is called Mikimoto Ginza, and this slender building 48 m high, built on an area of 274 m2 was completed in 2005. 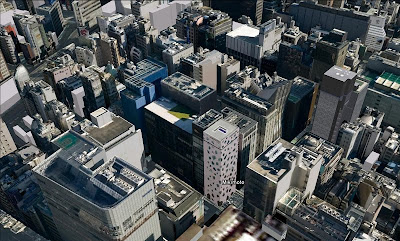 The building of apparent simplicity comprises a prism perforated by a series of irregular windows, like a Swiss cheese, apparently arranged at random. However, since some of these are placed in the corners (where typically would be a column) and as we look closely at the fine finish of the facade, is evident that a much a more sophisticated construction system was used.

The concept is based on the building is held by its facade, leaving the internal spaces column-free. 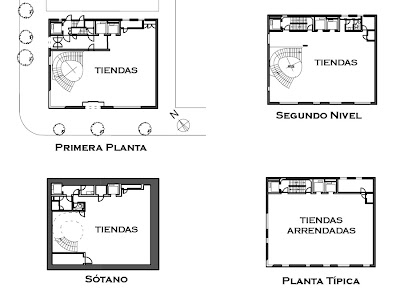 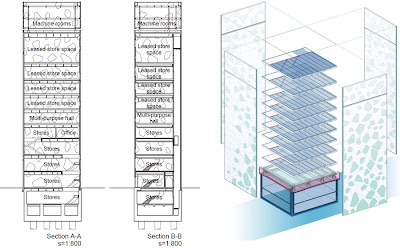 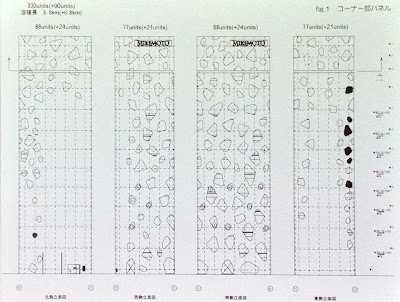 The shape of the windows is part of an elaborate geometry of triangles and squares, which resemble a fractal composition. 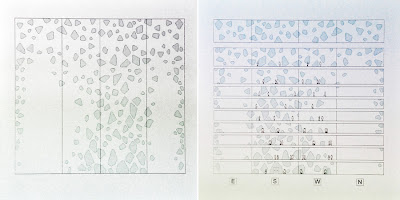 Because of the design, it was required a strong structure that would allow to place openings freely, but at the same time that would not easily expand when heated. For this reason Ito opted for a mixed system of metal plates and concrete. Steel plates of 1.2 cm were prepared and fixed by a web of studs in order to maintain a uniform thickness of 20 cm, and then concrete was poured between them. 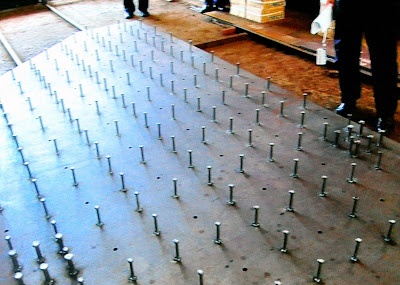 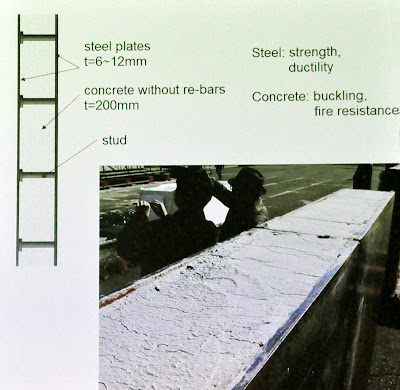 The plates were then transported and assembled on site. It took a total of 330 pieces to build the facade. 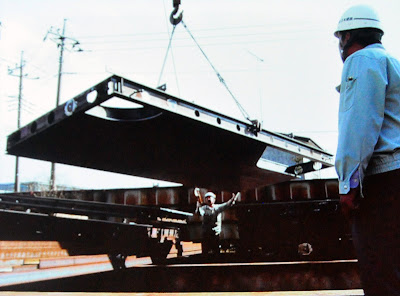 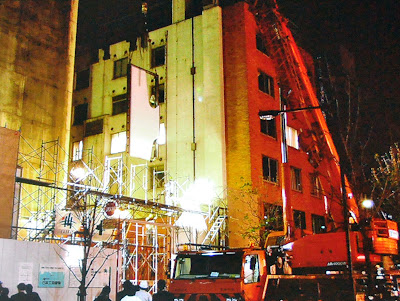 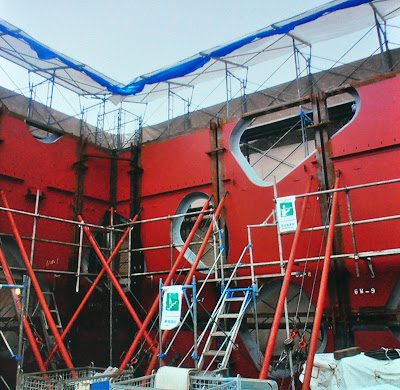 Finally, they proceeded to weld the plates and paint them. This process was done by hand and required up to 6 different stages of polishing and painting to ensure a smooth finish that the customer required. 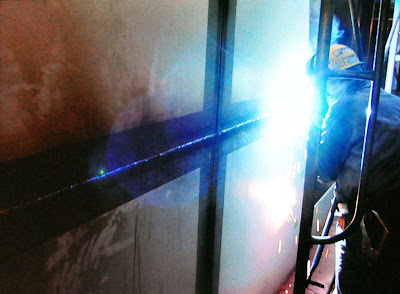 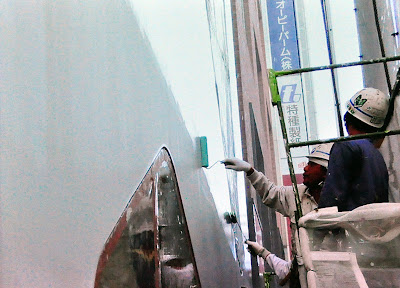 
As we approached and see the detail, we were impressed by the quality of the finishing and how finely this large metal facade was polished. 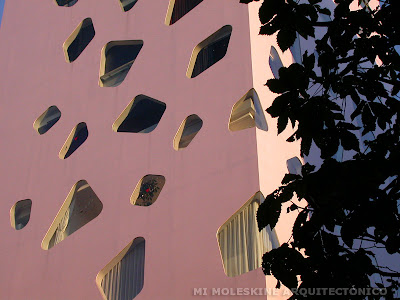 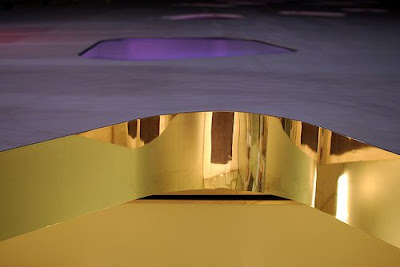 "Although the skin is built with 12 mm steel plate, when you weld it everything tends to bend. Furthermore, if you don’t do it perfectly, at the end you see the weld joints. To achieve a perfectly flat surface we had to work a lot. We, the engineers, the workers… We, the engineers, the workers… all had to experiment with a lot of different solutions. " 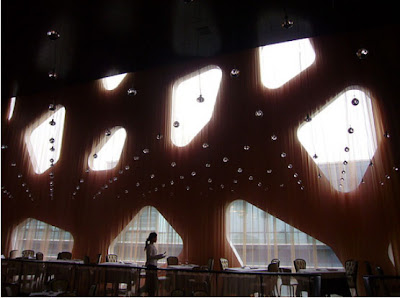 Stefano Mirti, from Domus magazine, asked about the relationship of their work with technology, Ito says,

"Actually, the sense and meaning of technology in my works is changing. In the past the technology was highly visible. It was presented in a visible way. Now it is different. Technology is now something I hide, you have to look for it, you don’t see it, you can't see it. It is an element to be used and exploited in an indirect way. Before, I used to envision an architecture that nobody could touch, impossible to grasp and hold. Now, again, it is different. Now, I want to do an architecture that you can touch and feel. Now I am working on the physical reality, on the object, on the real. This interests me now." 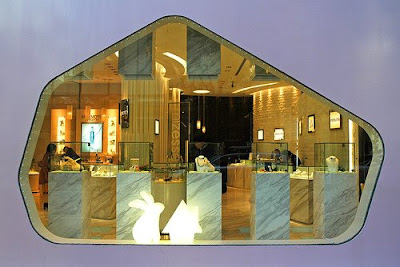 The tower is basically a rectangular box, and from a distance, resembles the typical skyscraper. However, it is at night when probably it becomes more appealing, when lights of different colors enhance the irregular windows and display the glamorous interior. 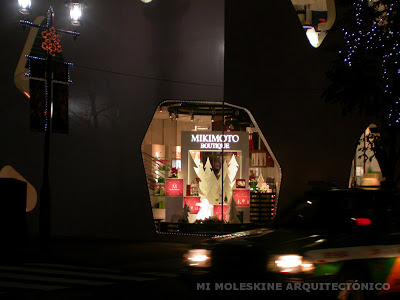 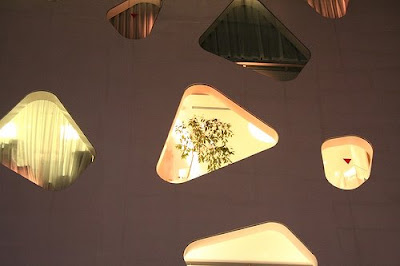 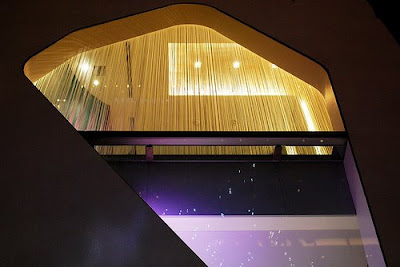 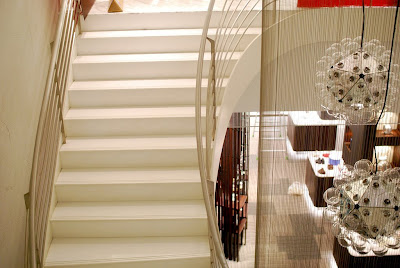 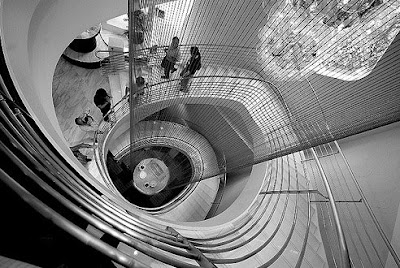 Beautiful photo of the interior stairs, courtesy of Ra Xosi

Posted by Carlos Zeballos at 11:30 AM