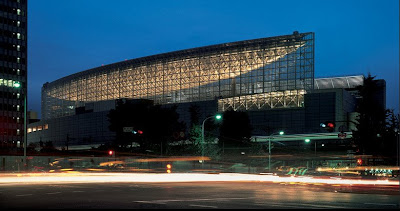 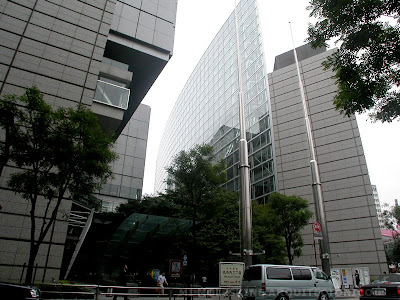 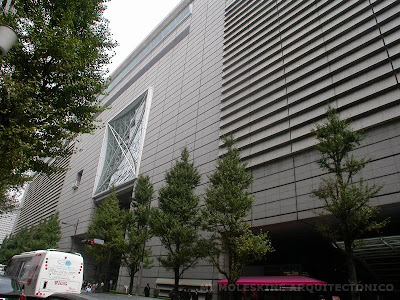 The modern history of this modern venue dates back to 1989, during the late Japanese booming economy, when the City of Tokyo called for an international competition to build a complex dedicated to contribute and emphasize the Japanese opening to the world. 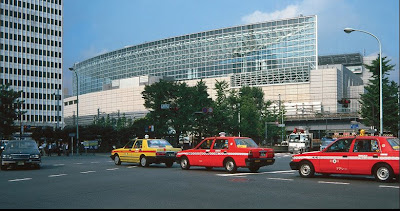 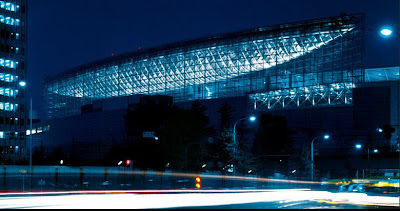 Interestingly, despite the enormous influence Western architecture has had in Japan, and the active participation of Japanese architects in the West in recent decades, it was only in 1989 that the first international architectural competition was carried out in Japan, with the collaboration of the Union Internationale des Architectes. The idea was that the International Convention Centre, which also cover cultural activities, would become a symbol of international opening-in times when Japan was still very closed. 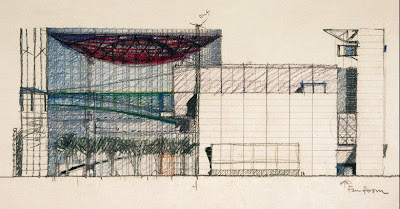 The plot was trapezoid-shaped area, where a group of buildings of the City of Tokyo formerly stood . In addition to the irregularity of the lot of 6.7 hectares (bounded to the east and southeast along the curve of the Shinkansen, the famous bullet train's railroad, and surrounded on other sides by a grid of office buildings), the complex was connected to Yurakucho Station (the largest underground Terminal) and Tokyo Station, the heart of the country's rail. 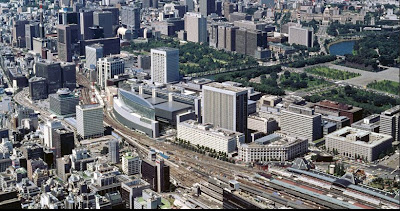 The program that the complex should accommodate consisted of specialized facilities for conferences, meetings, exhibitions and trade shows, five theaters that could accommodate cultural events, shopping and popular performances including music, dance and movies, and a Visitor Center that serves both residents of Tokyo to foreign visitors. 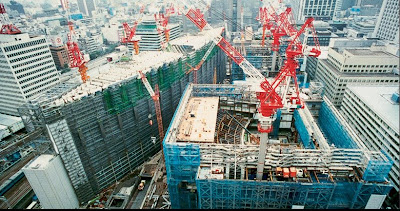 In that sense, the proposal of the  Uruguayan-American Rafael Viñoly won over nearly 400 other international entries, because of its clarity, originality and character. The idea is to form a glass building of lenticular shape, following the contour of the railway line, acoustically protected by a hard shell composed of the meeting rooms of the complex. Towards the urban grid, four square blocks, whose size is increasing as they are sequentially arranged from north to south, and hosting the four main theaters called A, B, C and D. 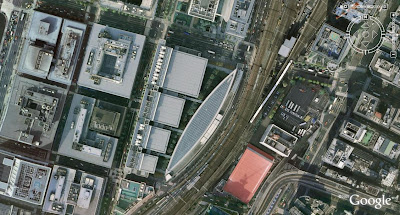 Among these blocks and glass living room there is a pleasant and elongated square that offers a respite from the overwhelming hustle and bustle of the Japanese megalopolis. Both sides of the building are sewn together by pedestrian bridges that fly over the square, giving the grand atrium a pedestrian scale that overflows to the external public space. 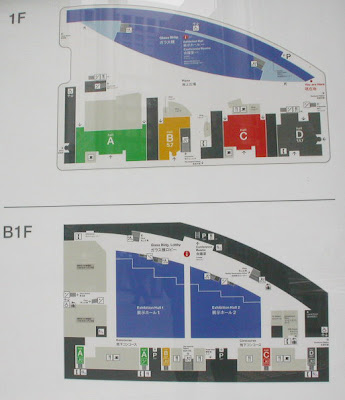 This glass lobby is precisely the most significant space of the whole complex, not only for its imposing height and multiple magnificence but for the particular form of its coverage, a structure that resembles the skeleton of a prehistoric whale and the crowns the space dramatically, allowing abundant light to enter into the room. 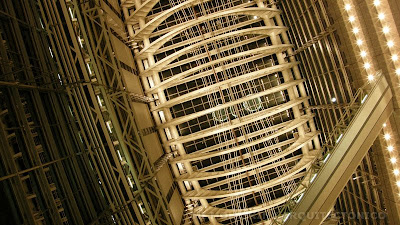 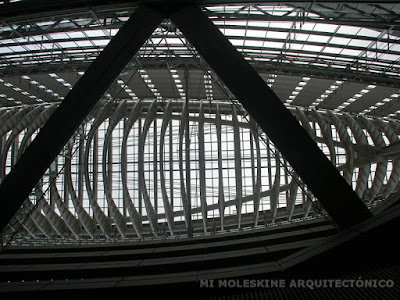 The innovative system of truss beams working in compression and tension cable elements, is supported on only two columns located along the central axis and spaced 185 m from each other. Thus, by eliminating any intermediate columns, greater transparency and lightness, and better integration with the outside lobby is achieved. 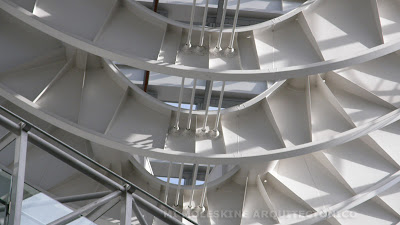 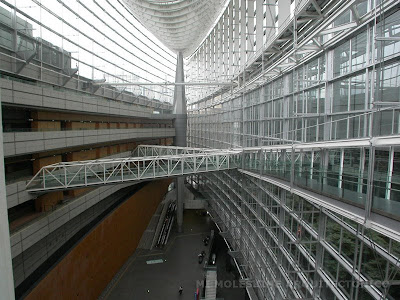 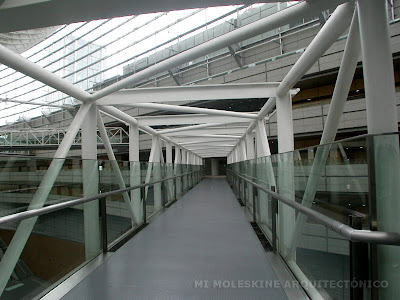 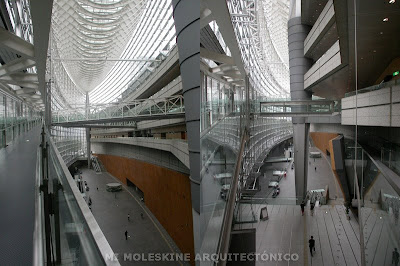 To further increase the drama of the room, the side wall is slightly  inclined inward, while a ramp wraps helically, accompanied by meandering pedestrian bridges that cross the atrium, offering a visual experience and ever-changing perception of space. 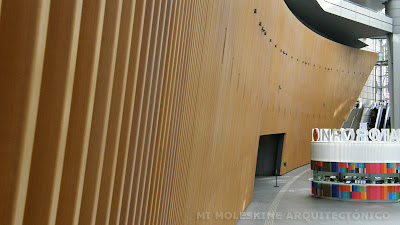 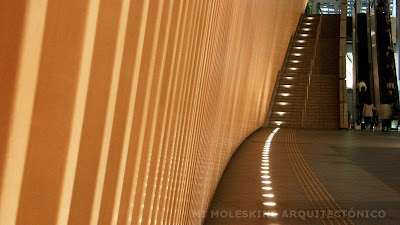 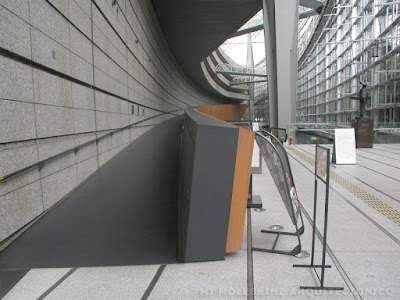 In contrast to the lightness of the glass hall, the theaters located in the east (as far as possible from the noise produced by trains), express passivity and robustness, but to avoid a heavy or bulky appereance, their masses have been elevated two levels from the pedestrian plaza. 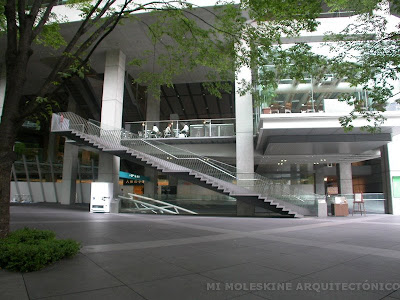 Therefore, the first level contains the lobbies of access to the theaters as well as restaurants, specialty shops, an art gallery and traditional  wood-covered Japanese rooms, with their rice paper walls and tatami floors, ideal for tea ceremonies other occasions.

The theaters themselves are a marvel of technology and the greatest of these is among the largest in the world. With a capacity for 5,000 spectators is a futuristic hall whose mezzanine is suspended between two glass panels, giving the impression that it is floating in the air. 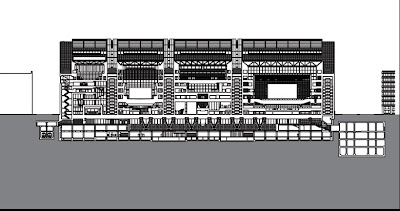 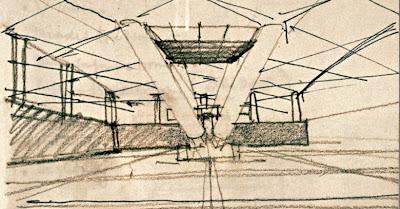 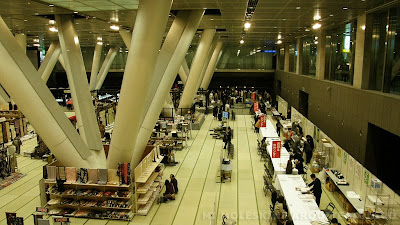 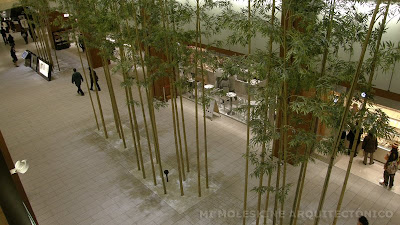 Between these blocks and the glass hall, as we mentioned earlier, there is a pleasant and busy plaza that offers a respite from the overwhelming hustle and bustle of the Tokyo megalopolis. This square is crossed by more than 100,000 people a day, and some of the  trees, benches and sculptures offer a refreshing opportunity to slow down. This is facilitated by the shape and transparency of the curve designed by Viñoly, which acts as a receptacle for multiple destinations and routes. But, in addition of being a pleasant circulation, I found that the square is often also a destination, an area to relax, paint, meet and chat. 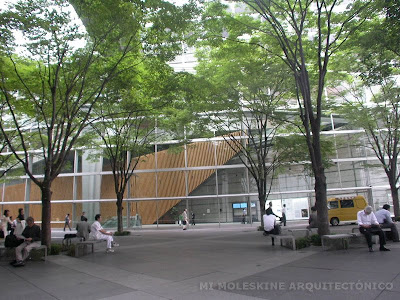 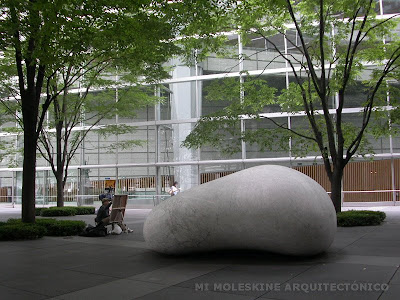 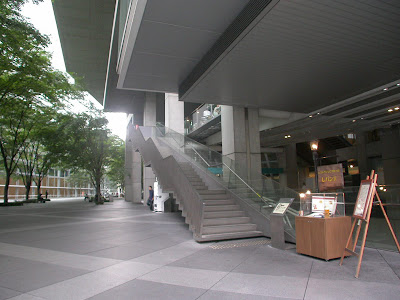 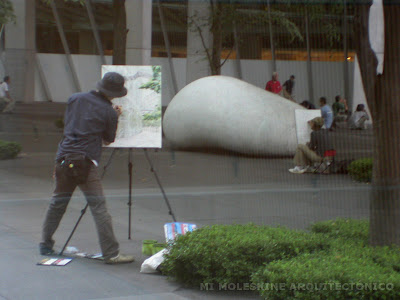 More than 15 years of its opening and against the predictions of some skeptics, the Tokyo International Forum is still a place for cultural exchange between Japan and the world, offering a rational but innovative building, designed by one of the most notable Latin American contemporary architects.
Posted by Carlos Zeballos at 12:39 PM