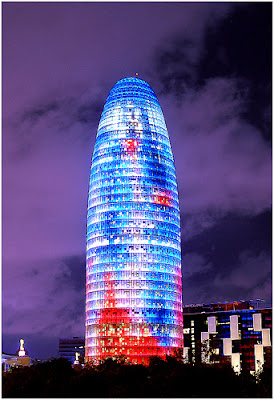 VERSIÓN EN ESPAÑOL
Ah, Barcelona ...! Irresistible city that has it all. With its Montjuic and its Ramblas, its Mirós and Gaudís, the musical sound of his Catalan language, its landscape and its people, the elegance of its old rich heritage and the challenging quality of its Avant Garde. The Colonia Julia Augusta Paterna Barcino Faventia of the Romans, commonly known as Barcelona. Until recently, the Barcelonan urban landscape was dominated by the still incomplete profile of the emblematic church of the Sagrada Familia, but only recently a rival appeared in the horizon: the Agbar Tower, designed by the internationally renowned architect Jean Nouvel, in collaboration with the studio b720 Arquitectos from Barcelona.
Jean Nouvel is the best known French architect at the time, as he has received the highest award in architecture, the Pritzker Prize in 2008. Owner of an innovative talent for interior and architectural design while using materials like metal and glass, his works appear more refined than the High Tech style. Nouvel has also been recognized with the "Grand Prix d'Architecture and the "Equerre d'Argent" awards for its many interior design and architectural projects. Moreover, Brad Pritt named his daughter Shiloh Nouvel Jolie-Pitt, as the famous American actor is a fervent admirer of the French architect (sorry, but I do not think I would name my son as Tadao Zeballos because he will hate me for all his life) . 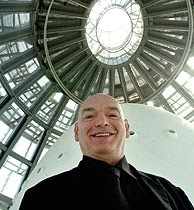 "This is not a skyscraper in the American sense of the expression. It is a unique development in the middle of this quiet city," Nouvel said about his Torre Agbar. "But it is not the slender, nervous verticality of spires and bell towers that often dotted horizontal cities. It is, instead, a fluid mass that has sank on the ground, a geyser under calculated permanent pressure. Novel made this reference for his client, AGBAR, the water utility company Aguas de Barcelona. 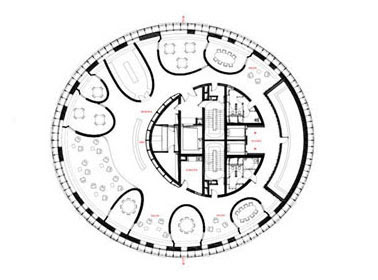 Floor plan courtesy of arquispace
The truth is that the metaphor of a geyser seems to me exaggerated. A geyser is a temporary phenomenon of an ever-changing shape, and that is quite different from the ethereal geometric form of the Agbar building. Indeed, many have associated the shape of the tower with a bullet, a suppository, a dildo and even phallic references. To be honest, the first time I saw the building I figured it was meant as an allusion to the main nave of the Sagrada Familia, which will have a similar shape, but could not help but think of how much fun would have been to have Sigmund Freud psychoanalyzing Nouvel.
Beyond the metaphors, the fact is that the Torre Agbar is located with a height of 144.4 m as a lonely landmark in front of the Plaza de las Glories Catalanes. 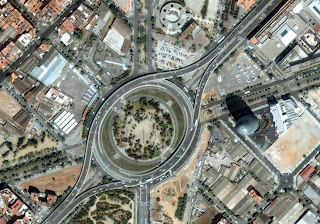 See location on Google Maps
The concept is based on two non-concentric oval cylinders topped by a glass dome. 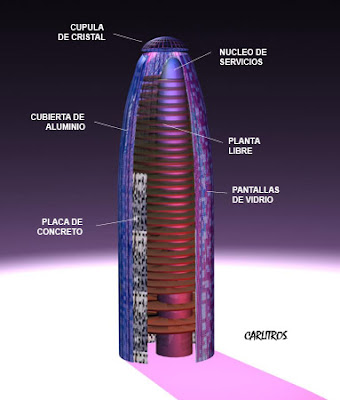 The inner cylinder contains the circulation and the services, and connects the 31 elliptical stories, which are free of columns. 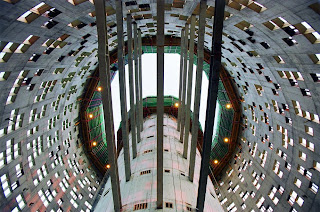 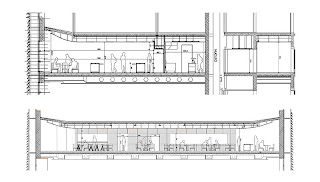 The outer cylinder has two skins: a concrete interior covered with sheet of aluminum and the other consisting of 59.619 glass plates, creating a colorful facade of more than 40 different tones that resemble a pointillist painting.Between the two membranes an air cushion is generated, allowing the ventilation of the building. 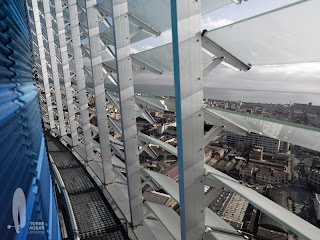 "The surface of this building evokes water: smooth and continuous but also vibrating and transparent because it manifests itself in deep colors - uncertain, luminous and colorful" continues Nouvel. "This architecture comes from the earth but it does not have the weight of the stone. It could be a distant echo of the old Catalan formal obsessions, dragged by a mysterious wind off the coast of Montserrat." 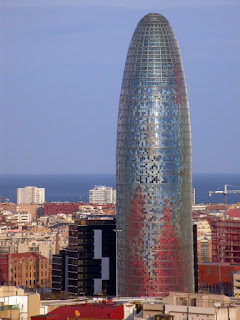 But it is at night when the building achieves its greatest charm, becoming a giant multicolored lantern.4500 lights of different colors give life to the show that has made it famous worldwide. It uses a sophisticated LED system , which allows a better lighting performance and a more uniform light tone while optimizing energy consumption. 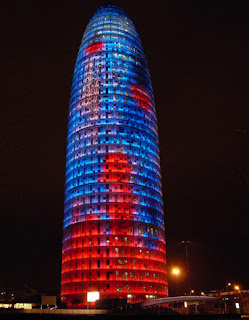 The multiple windows of the open floor plans offer users the most valued views in Barcelona while the colored environment of its more conspicuous spaces -auditoriums, cafeterias and offices- makes clear the skill of the designer, recognized in his projects from Lyon to Tokyo. 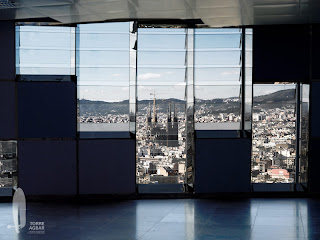 View of the Sagrada Familia 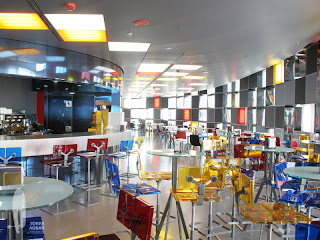 Cafeteria
Photos courtesy Agbar Group
Nobody can deny that the tower has become an important landmark in the memory of the population, although not all locals like it. And while I celebrate the quality of the design per se, I worry that this will be the beginning of a trend where many skyscrapers will start to populate Barcelona, but with much less quality than the talented Nouvel's building... it would be a shame.
Links: To view the changing colors Torre Agbar, click here: Jan, Arnel, Sr. Flavia Mateu and me in Barcelona
Posted by Carlos Zeballos at 12:44 PM