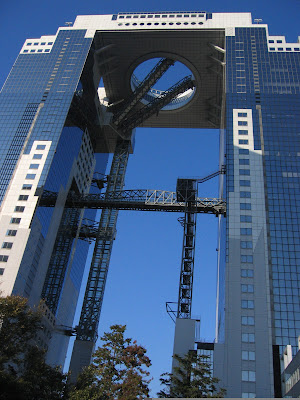 Osaka, with a population of 2.5 million inhabitants, is the second city of Japan. Because it was almost completely destroyed by bombings during the Second World War, this port city does not have a surviving historical heritage as important as Kyoto or Nara. By contrast, its architecture, urban planning and infrastructure are impressive symbols of a modern and cosmopolitan city.

Near its main tributary, the Yodo River, the Umeda district is located, the financial and commercial heart of the city. Here, we found a special skyscraper: the Umeda Sky Building (1993), designed by award-winning architect Hiroshi Hara .
Hara (internationally known for his design of the Sapporo Dome stadium, home of the World Cup Japan / Korea 2002) designed the building with two goals. 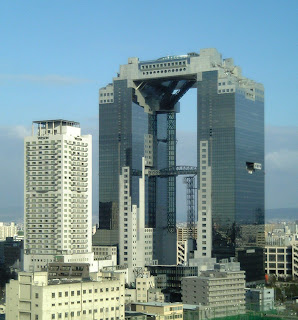 Firstly, to create a great urban gateway, similar to the Arche de la Défense, Paris. Two towers of 173 m were erected, joined at the top by a viewing terrace, making it the tallest building in Japan at the time of its completion in 1993. Now occupies the seventh place among the highest Japanese buildings.
These towers are connected by bridges, panoramic elevators and electric sidewalks, affordingan interesting pedestrian dynamism, unlike to most of the world of skyscrapers, where you can only go up or down. 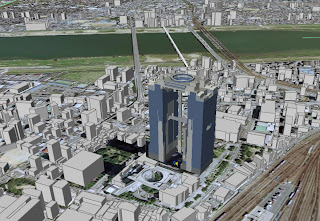 
The building is crowned by a platform of 54 by 54 meters, perforated at its center by a glass ring that seems to evoke a space station. 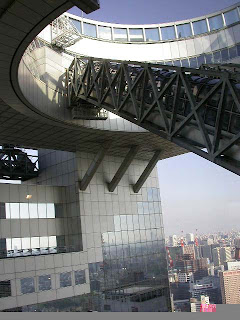 This platform includes restaurants whose interiors are soberly decorated , called the "Floating Garden" Observatory, which some critics have compared to the Hanging Gardens of Babylon. 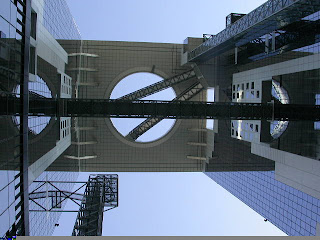 There is also an interior balcony and an outdoor terrace, from where you can appreciate a spectacular view of the city of Osaka, especially the Yodo River. 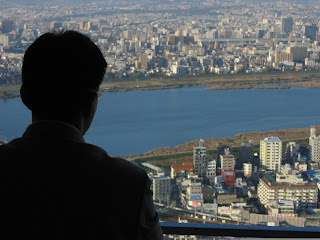 The second objective was to give this skyscraper the appearance of a floating city, and for this purpose Hara used a special glass on top of the building, which reflects the surrounding sky and landscape, contrasting with the opaque ceramic on the bottom . In this way, the building changes its appearance every day of the year, every hour of the day. 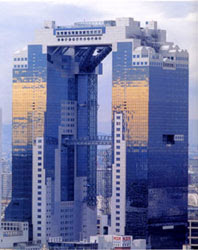 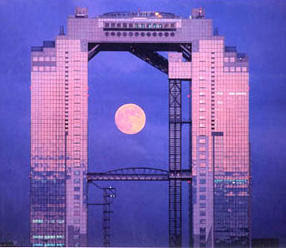 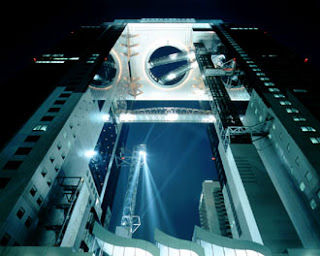 At the top of each tower, the edges have been shredded in a series of volumetric allegories, becoming a metaphor of the clouds in which the garden observatory "floats". In my opinion, this action spoils the purity of the idea by including unnecessary and arbitrary decorations. This attitude of Hara is recurrent in his other buildings such as the Kyoto Station, which I hope to refer in a future post.

To see a 3D volumetric animation of the rooftop, click here:

The construction process was very interesting. Firstly the side towers were erected and later the observation deck (which had been assembled separately) was hoisted by a crane and fitted at the top of the building . 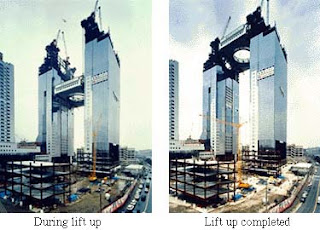 
During my visit I found a funny but flattering trivia: In the hall there is a large size model of Machu Picchu, with a sign that reads "The ancient floating city of the Andes: Machu Picchu (" Andesu Kodai no toshi kuuchuu Machu Pichu). 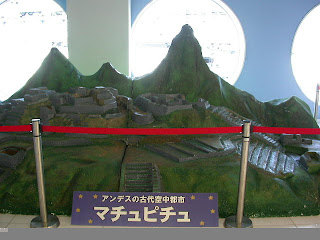 That is a suggestive adjective, given to the Inca citadel: above of its qualities such as "sacred", "hidden", "lost" or others that we often hear, they preferred to enhance their ethereal character. It is therefore interesting the similarity found by the Japanese between this high-tech building and the wonderful Peruvian citadel, whose image floating in the clouds I recall with pride, affection and a bit of nostalgia. 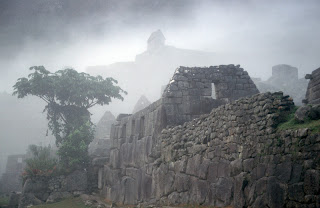 Another unique attraction at the garden level, is a set of restaurants that recreates a picturesque street, evoking the old Japan of the early twentieth century in the Showa era. 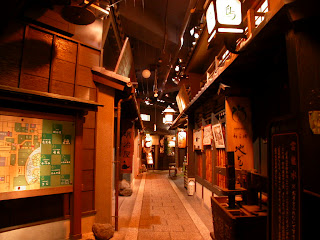 Its originality in new skyscraper design, the knowledge of construction techniques that deal with earthquakes and typhoons, a unique search for integration between man, technology and landscape, and the thoroughness and sobriety in the interior design, typically Japanese, makes this impressive work an architectural landmark of the twentieth century Japan. 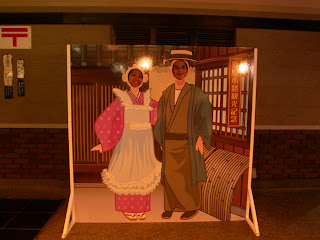 Posted by Carlos Zeballos at 11:07 PM