KURAMA, THE BATHS IN THE SACRED MOUNTAIN 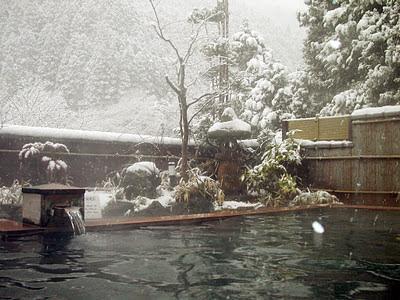 VERSIÓN EN ESPAÑOL
Japan is a mountainous country with high volcanic activity, and therefore it is common to find hot springs called onsen (温泉). But beyond a purely geological phenomenon in Japan onsen are part of an ancient cultural tradition, an intimate relationship between man a nature, frequently framed by architecture.
As Suehiro Tanemura mentions, the first users of the thermal baths were the gods.
According to the Guide to the seven hot springs, "before the ancestors descended from heaven, the gods Oonamuchi and Sukuna-Hikone reigned the Central Land and the Reed Plains. Commiserating for the short life of humans, they established methods to relieve their ailments: the medicine, abstinence and the thermal baths. " 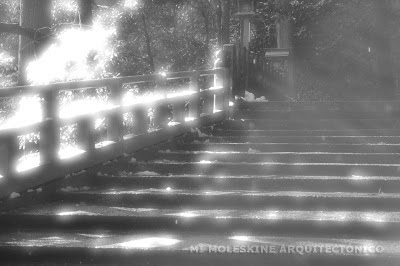 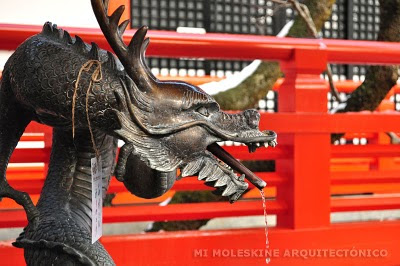 Thus, the onsen were used primarily as a form of archaic medicine. It was common to find hot springs to alleviate, for example, wounded soldiers, and this practice spread even during the Second World War. Their privileged location in the heart of the mountains also allowed to experience the healing properties of mineral waters, while establishing a close contact with nature.

Today onsen are one of the greatest tourist attractions in Japan, as they relief stress from work and they welcome, stripped from all clothing, people from every social strata: managers and salarymen, rich and poor, young and old, men and women ... Men and women?! Well, until a few years ago yes, it was common, but now almost all onsen baths are gender differentiated.
Mount Kurama, located 12 km north of Kyoto is a prime setting for an onsen, set among wooded slopes thickly covered with cypress trees. 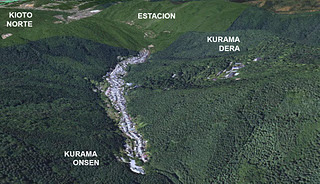 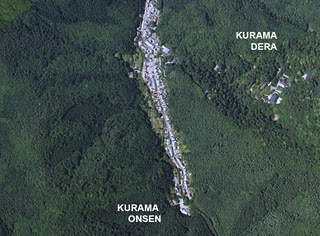 THE TEMPLE OF KURAMA

Mount Kurama has been important for the people of Kyoto from its founding in the late eighth century up to today. 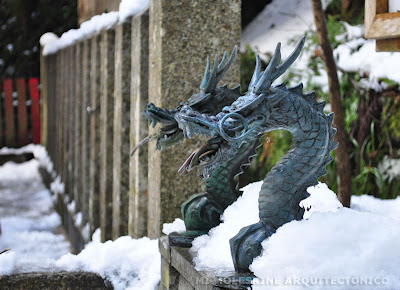 The Kurama temple dates from 770 and was built by the monk Gantei as guardian of the north of the newly founded city of Kyoo Heian (now Kyoto). 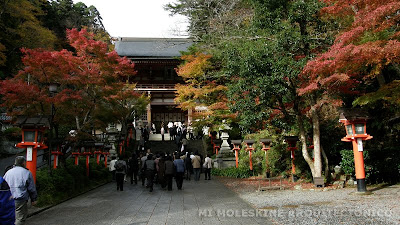 Niomon (Gate of the Guardians) at the entrance of the temple.

In fact, it is a complex made of multiple religious buildings scattered on the mountain. The road follows the ascent of the pilgrim, often flanked by lanterns or stone steles engraved with prayers, and eventually offers spaces for relaxation from where is possible to contemplate breathtaking views of the city. 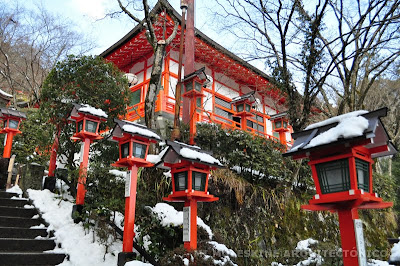 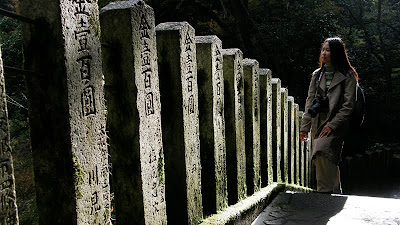 Although this temple originally belonged to the Tendai sect, the temple of Kurama is today the headquarters of the Buddhist sect Kurama Kyoo. 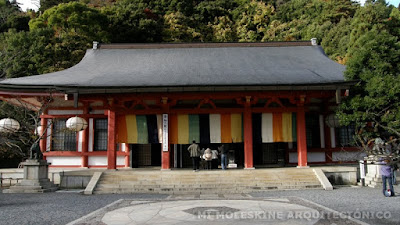 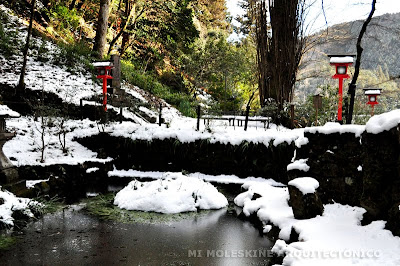 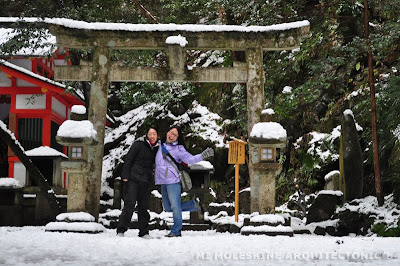 Every October 22 one of the most popular events in Kyoto is held at Mount Kurama, the festival of fire or Hi Matsuri, a celebration to welcome the deity of Kurama. At 6 pm hundreds of torches populate the vicinity of the temple of Yuki jinja, especially giant torches over 3 meters high, made of pine and about 80 kg each. The procession of giant torches carried by men half naked, dressed as old warriors, attracts tens of thousands of visitors. 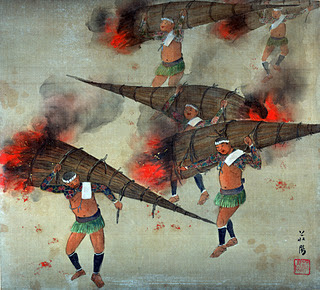 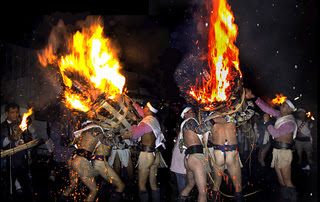 Mount Kurama is also the birthplace of the Reiki, a practice of spiritual healing with the laying on of hands, created at the beginning of the twentieth century. The story goes that its founder, Master Usui, went into the mountains and after 21 days of deep meditation and fasting had an enlightenment. He was so excited about his experience that rushed down the mountain and at some point stumbled and fell, hurting himself. He instinctively put his hands on the wound, which healed quickly. So he discovered his ability to heal, and spent the next four years perfecting his philosophy of self-help and healing. 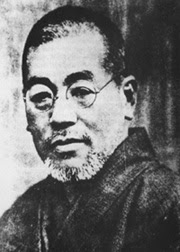 Dr. Mikao Usui
THE ONSEN AT KURAMA
But, as we said, Mount Kurama is also known for its onsen which can be enjoyed during the spring with cherry blossoms, in summer, escaping the heat of Kyoto, or fall, immersed in a landscape dotted with red and yellow maple leaves. But this time we decided to visit in winter, on a day when some flakes of snow fell on the city, melting as soon as they made contact with the earth. In just 20 minutes on the train ride the landscape changed completely as we climb towards Kurama the trees are covered with thick snow. 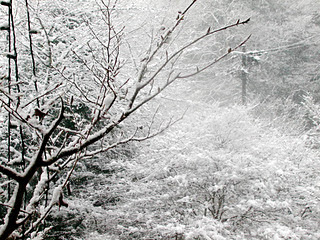 Upon reaching the station, we met a huge long-nose mask representing Tengu, the mythical god who lives on top of Mount Kurama, and who possesses supernatural powers, a deceptive sense of humor and extraordinary martial skills. Because of that he has been the main character in numerous stories and legends. As Lucy Moss mentions, one of the most famous ancient legends tells how the King of Tengu, the old Sojobo coached the XII century hero Yoshitsune Minamoto in the art of fencing, martial arts and military strategy.

The Kurama baths are located just a few minutes from the station, and we approach at the place through a winding path of stone, which blends with the natural character of the site. 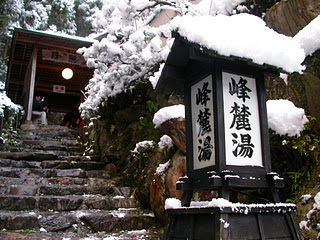 The baths for men and women are differentiated by a small curtain, called noren. Usually, subtle details like these are sufficient to determine the public or private character of the spaces. 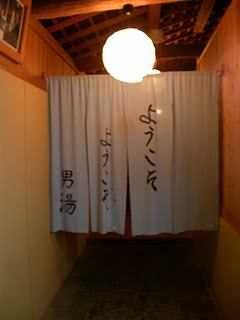 Once inside and after taking off the shoes and then the rest of the clothes, the bather must first washed himself or herself with soap in the showers specially prepared for that purpose. It is against the custom to enter the onsen without having previously take a shower. 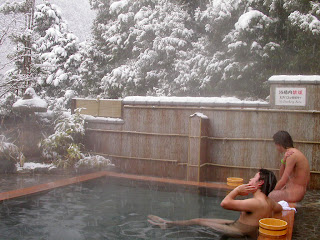 Once these preparations are completed, it is possible to enjoy a spectacular open-air bath (otemburo), gliding noiselessly over the hot water. It is not advisable to attempt a double mortal jump, as the possibility of a fracture may involve a serious problem of social discrimination: blood in the water would imply an unacceptable impurity.
Moreover, the idea is part of a bucolic experience, in awe before the gray landscape, lulled by the gentle murmur of water, semi-levitating between vapor and fog, while snow flakes play over our heads ... a healthy and wonderfully relaxing experience ... 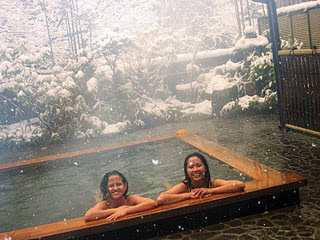 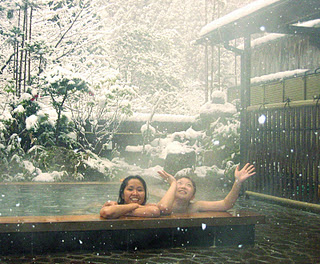 To see a video of our visit, click here 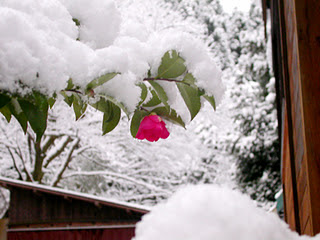 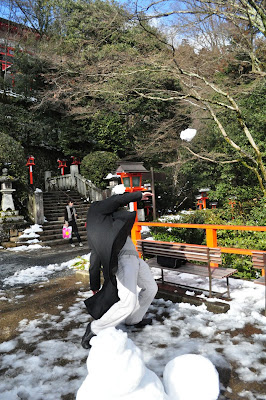