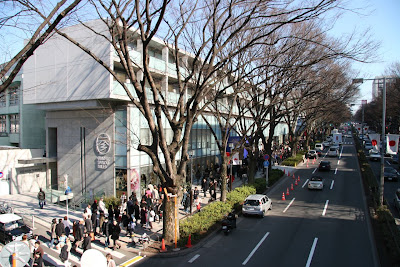 Photo courtesy of Oimax
In 2006, 20 years after completion of Times I, the huge urban regeneration project Omotesando Hills was finished in Tokyo, a mixed used complex consisting of 130 shops and 38 apartments housing (incidentally, there is no hill here as there is none in Roppongi Hills. It's just a chic way that the Japanese have to call their malls, referring probably to Beverly Hills). 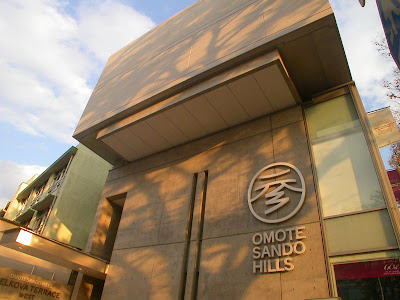 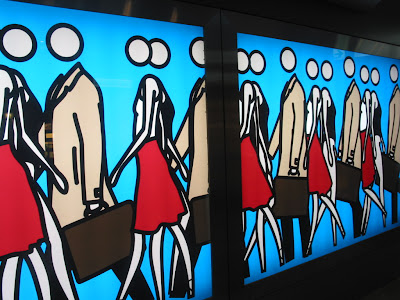 
The project, initiated in 1996, shows the Tadao Ando in the 90s. He had already won numerous architectural awards, including the Pritzker Prize, received millionaire commissions and was the head of one of the most significant architectural offices in the world.

First scketch. Image courtesy of Tadao Ando Architect & Associates
Construction began in 2003, executed by Mori Building, one of the major Japanese construction companies (one of his most famous works is Namba Parks in Osaka.)

This project caused controversy because it replaced some Bauhaus style buildings, the Dōjunkai Aoyama Apartments, a social housing complex built in 1927 after the Kanto earthquake and survivor of the bombings during World War II and one of the richest and historically significant urban areas in Tokyo.
At the same time, Omotesando Street was built as the first boulevard in the country, leading to a large Torii indicating the access to the Meiji Shrine. 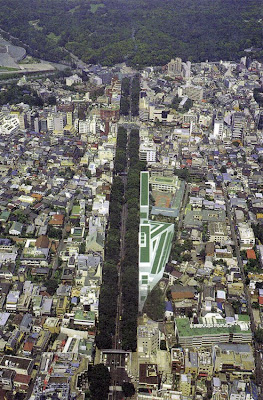 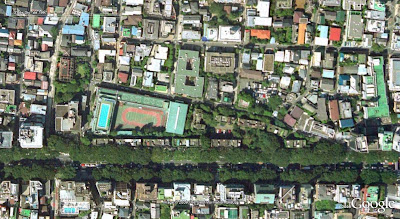 See location on Google Maps
Over time, Dōjunkai Aoyama Apartments started to become a commercial area, and many of the houses began to be used as boutiques and small galleries. At the time of demolition, only 10% was used as a dwelling. The excuse for the demolition, as usual, was the danger of collapse in case of a big earthquake, and while some voices were raised to condemn the loss of Japanese urban heritage, the truth is that there was lack of will and money to save the Dōjunkai Aoyama Apartments. 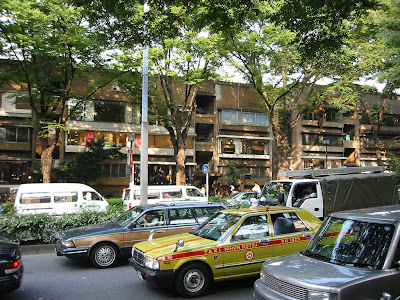 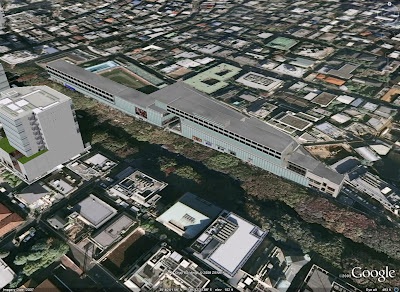 The complex has two entrances. The main access is defined by a diagonal cut that behaves as a small square. 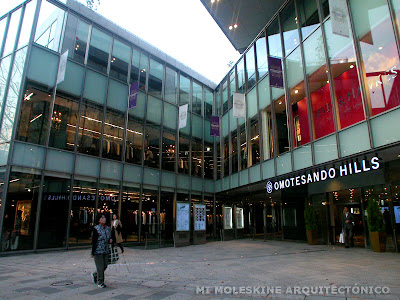 The housing volume protrudes dramatically several meters above the entrance plaza, emphasizing the main direction of the composition. 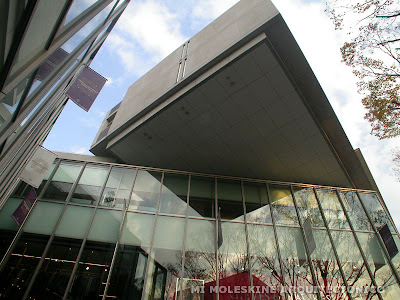 The second entrance is located on the eastern end of the building. Interestingly, Ando includes one of the original Dōjunkai Aoyama Apartments buildings recycled as and entrance to the complex. In the past, the architect has demonstrated his ability to integrate contemporary architecture in historic buildings (such as in the Villa Oyamazaki in Kyoto or the National Library of Children's Literature in Ueno, Tokyo). In Omotesando Hills he does the opposite, inserting a historical building as part of a large department store. 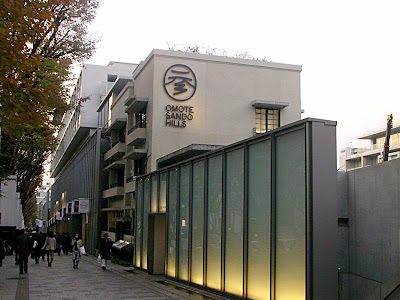 The entrance to the complex is one of the original Bauhaus style apartments.

The facade acts as a giant electronic 250 meters billboard, consisting of a series of LED whose displays change continuously. 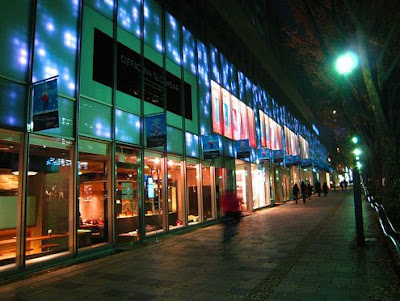 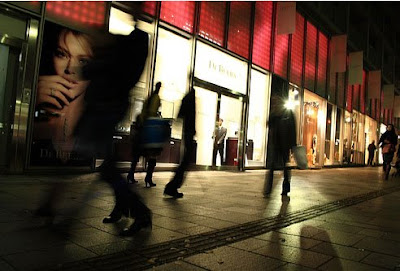 Photo courtesy of since73

The following video shows the facade at night.

To capitalize on the enormous land cost (one square meter costing thousands of dollars) without disrupting the profile of the street, Ando chose to embed the build several levels underground. 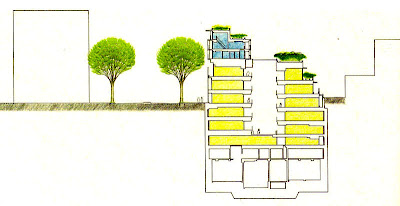 Cross section. Note that to the other side of the grove the building has a series of setbacks and terraces, in order not to disrupt the scale of the neighborhood street . Image courtesy of Tadao Ando Architect & Associates

The concept is really simple. In a triangular plot, a ramp 700 m long, called Spiral Slope ascends 6 levels, around a large atrium of oblong and monumental proportions, naturally lit by a skylight. 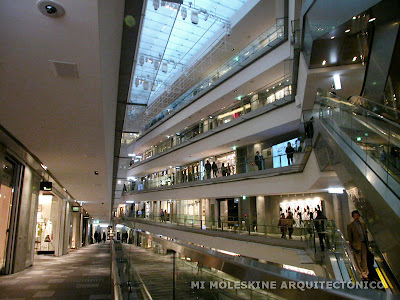 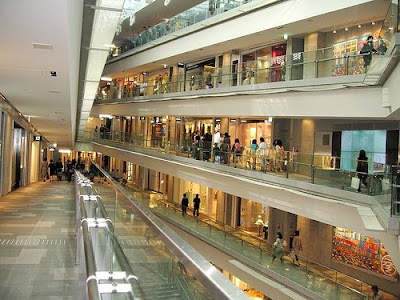 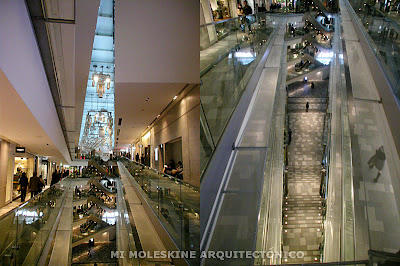 In this way, the visitor enjoys a panoramic visual contact with all the shops. At one end, a lift allows a quick connection between the different levels. 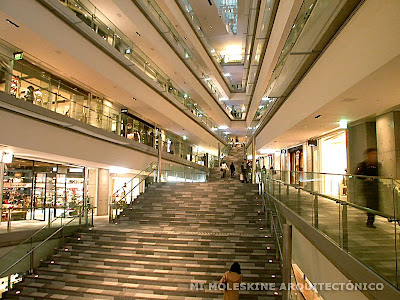 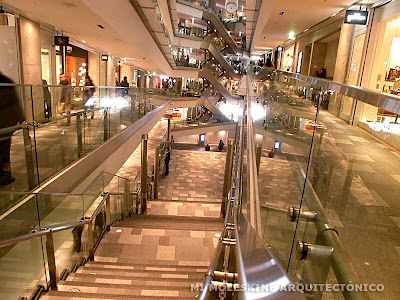 Photo taken by myself from a sign that says "it is forbidden to take photographs."


At the base of the atrium there is a staircase that becomes wider as it go deeper and can be used as an amphitheater. This public space, whose texture is composed of various shades of gray, has been used on several occasions for cultural activities such as the famous "Candle Night" . 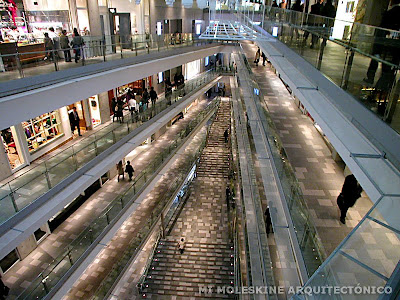 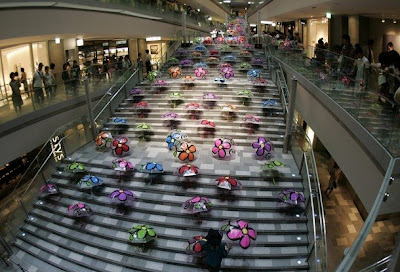 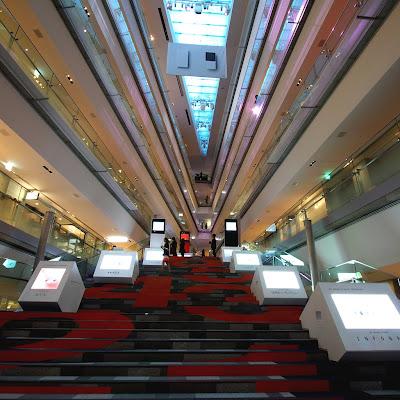 
Besides the commercial aspect, Ando has included areas for cultural development. The so-called Space O, located on the basement, is a 500 m2 multipurpose space where various visual exhibitions are displayed or cultural presentations can be performed. Ando had already experimented with this type of spaces in Naoshima, in the Open Field at the Chichu Art Museum as well as in Minamidera , both in collaboration with James Turrel. In this case, the Space O has more flexible characteristics, but can also be used to house exhibitions in which the user interacts with the works of art. 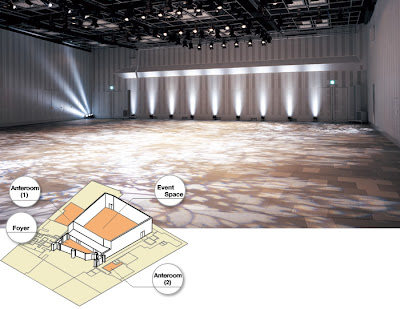 Water is also present through a flat and serene channel as well as a triangular pool at the apex of the triangle, an ornamental feature that marks the beginning of the complex. I would say the mall has a more human scale in the East , and gains monumentality as we headed west. 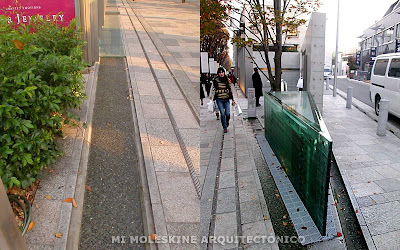 The concrete grid that forms in the upper housing volume, evokes the aesthetics used by the architect in his famous residential complex Rokko Housing in Kobe.

Facade to the grove. Image courtesy of Tadao Ando Architect & Associates
The idea of ​​the architect was to isolate these homes as much as possible from the hectic world that we happens under them, creating a private environment, despite being in the commercial heart of the city. 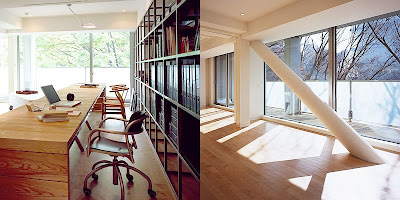 Interior of the apartments. Photos courtesy of Mori Co.


Likewise, the complex environmental contribution is are the so called Zelkova Terrace, roof gardens covering an area equivalent to 30% of the land and irrigated with rainwater. Unfortunately the public has no access to this garden. However, this restriction is understandable, perhaps because of the discomfort experienced by residents of famous housing developments such as Rokko Housing or Nakagin Capsule Tower , where they endure hordes of curious architects who disturb their privacy, and some of them even have the nerve to publish these photos in their blogs and moleskines. 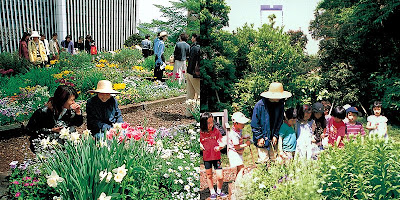 Zelkova Terrace, the gardens on the roof of the assembly.

It's easy to fall into the role of criticizing Ando. I think this has been one of those controversial projects where whatever decision is made someone will always criticize, even if it is in favor of progress or preservation. Ando has done everything what he could to answer both demands in a modern response, evidently suffering from the economic pressures of the Mori Co. However, the fact is that , especially when compared with the spacial richness of Time's I & I, Omotesando Hills is a neat mall, but just a mall after all. 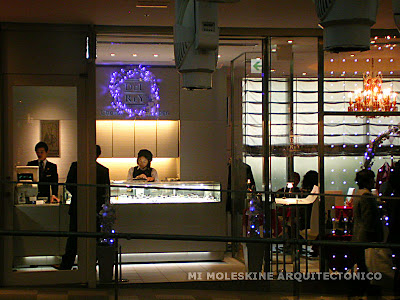 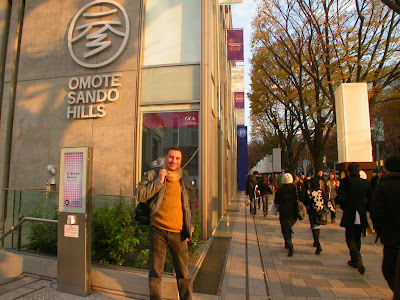 Posted by Carlos Zeballos at 9:45 PM