TOYO ITO: A TRIBUTE TO THE WINDS 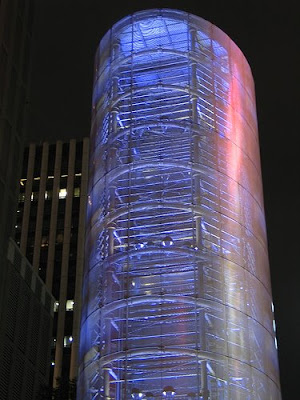 Toyo Ito is, along with Tadao Ando , the most internationally recognized Japanese architect of our time. But, unlike Ando, whose work is based in the Japanese tradition, particularly in the use of light, and maintains a rational, geometric, massive vocabulary and style, Toyo Ito is not tied to any style, experimenting with metaphorical themes, transparent forms and electronic gadgets. Therefore, his works are closely related to another aspect of the culture in Japan, that is in many respects, the most technologically advanced country in the world. 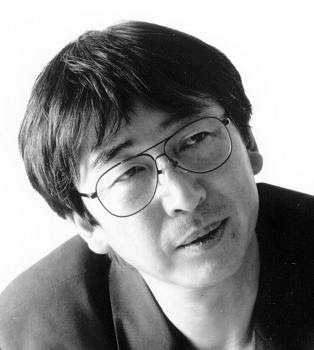 Born in Korea (although Japanese descent) during Japan's occupation of that country (1941), and owner of a simple, affable personality, Toyo Ito recognizes the importance of Ki (気), the energy flow that runs in the architecture and all things.

"The spirit of Ki, while circulating in the cosmos as air, it condenses and solidifies to form the body of living beings. The body is made of liquids and solids, but is mainly gas. At the same time as the gas condenses and solidifies to form the body, the air that is inhaled into the body fills it. In this way the Ki sustains life. once inhaled the air is exhaled rapidly and there is no distinction between the self and the others.

Hence Ito's architecture combines the wind flow with the flow of electrons and propose an architecture sensitive to the effects of the environment through the use of technology.
In this regard, two of his early experimental projects are the Egg and the Tower of the Winds, since it is light and almost ephemeral character, and its technological paraphernalia.
THE TOWER OF THE WINDS (1986)

There used to be an old water tower and ventilation ducts in front of the the Yokohama bus station was, an anonymous, brutalist and made-of-concrete structure . 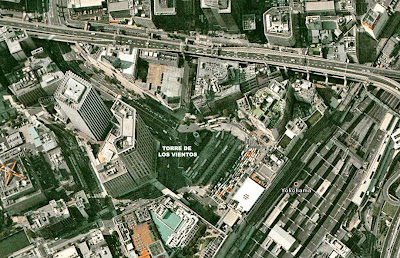 An architectural competition was organized with the idea of improving the first impression of visitors arriving to this city by bus. 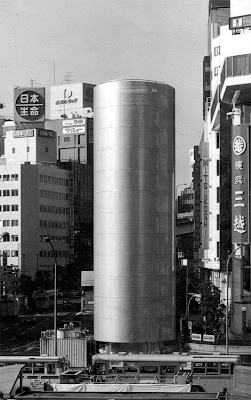 The oval cylinder geometry of the Tower of the Winds is distinguished from the other volumes in the surroundings.
Photo courtesy of El Croquis.
Ito's proposal was to cover the tower with acrylic mirrors. A metallic oval-cylindrical structure, 21 m in height and 9 x 6 section was installed around the tower, lined with a perforated aluminum coating that reflects the sky during the day. 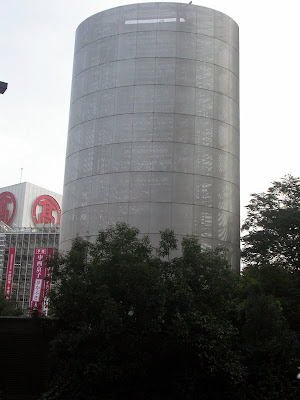 The tower is covered with a perforated aluminum plate. Photo C. Zeballos
I must say that my first impression was a bit disappointing, perhaps because I visited it on a cloudy afternoon and the tower did not seem to be anything special. However, the tower became much more attractive at night, when 1300 lamps in coordination with 12 rings offered a multicolor light show. 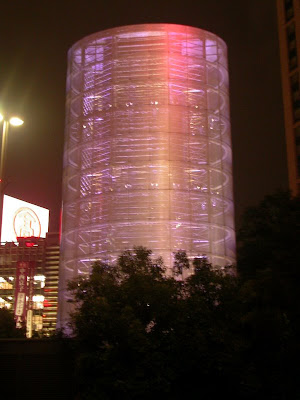 The same view at night . Photo C. Zeballos.
An electronic system recognizes the differences in wind speed and the sound waves in the noise around and translates them into light and color codes. For this reason, unlike a traditional arrangement of lights, this installation does not follow a predetermined program or routine, and offers an ever-changing spectacle of light and color.

Light Sequence of the Tower of the Winds. Photos courtesy of El Croquis 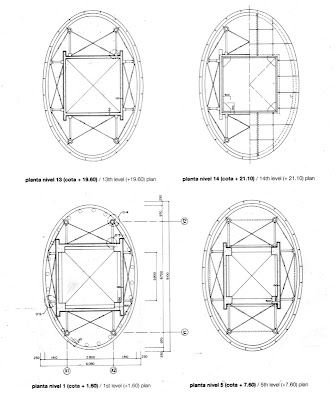 Floor plan of the Tower of the Winds. Image courtesy of El Croquis
The following concept video shows the components and operation of the tower

Ito proposed a kind of "Building of Tomorrow", an "video gallery oudoors." There are two versions of this, one in Brussels and the other in the Japanese suburb of River City 21 in Tokyo.
It is a structure of a oval geometry -a recurring form in their designs at the time, contrasting with right-angled parallelepiped volumes of its surrounding. 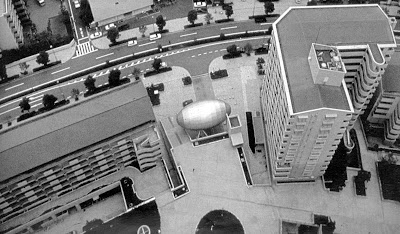 This capsule is attached to a wall, suspended from the floor by metal legs, and gives the impression of floating in the air, especially from a small public space located on the mezzanine. 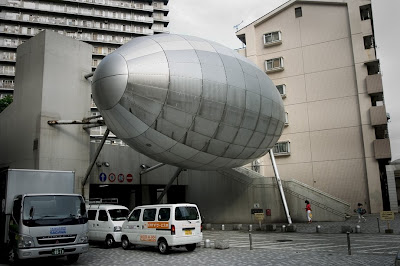 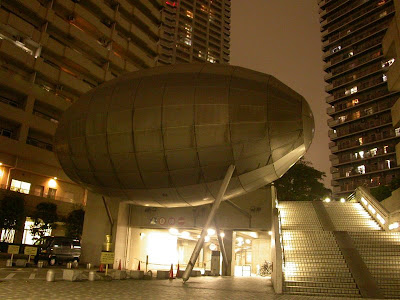 Day and night view of the Egg of Winds. Photo C. Zeballos

Using a coating similar to that of the Tower of Winds, this 16 x 8 m ellipsoid is covered with a perforated aluminum plate below which liquid crystal screens displayed pictures and news.

Schemes Egg of Winds. Pictures courtesy of The Sketch.

While in operation, the effect is very interesting: the images appeared as if they were floating on a curved surface, almost like a hologram, very different from the effect of the giant screens hung on the facades of buildings. 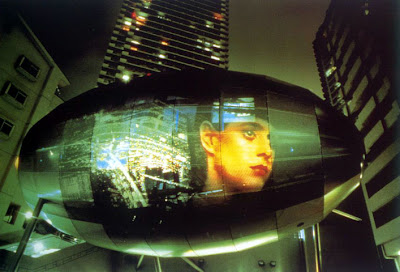 Initially conceived as a futuristic house, the Egg of Winds "is the object of the images that come with the wind and move with the wind." 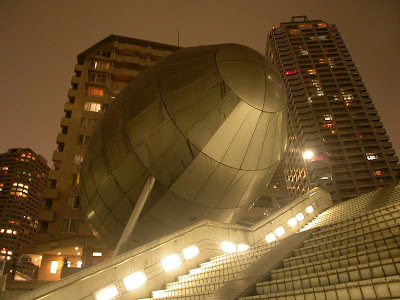 Interesting formal contrast with the surrounding volumes. Photo C. Zeballos.
For Toyo Ito the wind and its meaning are very important, not only because his architecture and especially his urban sculptures are characterized by lightness and transparency, but because it interacts with the environment and the user, making him aware of energy that surrounds it. 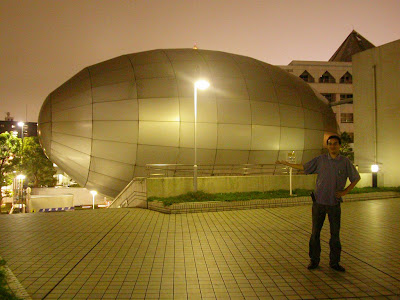 Seen from the upper terrace, the ellipsoid gives the impression of being floating. Smaller than it looked in the photos, I was not lucky enough to find it functioning.
Posted by Carlos Zeballos at 7:50 AM