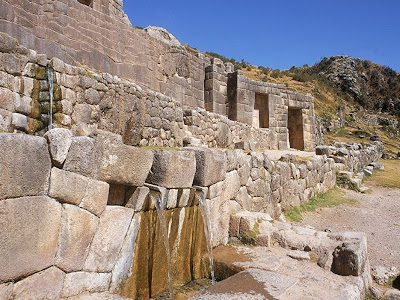 "...that city of Cuzco was house and dwelling of gods, and thus there was not, in all of it, a fountain or passage or wall which they did not say held mystery."
Juan Polo Ondegardo, 1571.
It is for me inevitable to establish a similarity between Japanese culture and pre-Hispanic Andean world in terms of the relationship of landscape and traditional architecture.
In the specific case of public baths, both cultures established a link between water, the spiritual world and the landscape.
However, perhaps because the rains are less frequent in the semi arid Andes than in the forested Japanese archipelago, the baths in the Inca empire belonged to a more exclusive social group, a circle associated with the divine and sacred and linked to worship of water. Therefore, according to Fernando and Edgar Ellorrieta, it is noteworthy that from the nearly three hundred and fifty temples surrounding the city of Cusco in Peru, ninety-two of them were destined for the cult of springs and water sources.
Impressive masterpieces of engineering and fine architecture associated with fountains can be found at Tipon, Ollantaytambo and Machu Picchu among others, and the baths of the Inca at Cajamarca were considered a place for relaxation for the ruler of the Incas.
This post will be focused on a small complex called Tambomachay, located about 8 kms. north of Cusco and close to the ruins of Puka Pukara. 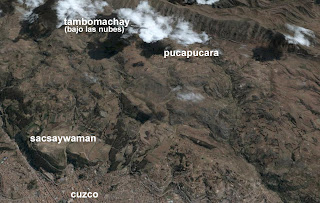 See location on Google Maps.
Tambomachay comes from two Quechua words: Tampu it was kind of accommodation and Machay, meaning cave, and refers to the many caves that surround the place and, according to the tradition, would have been venerated.
It is likely, however, that Tambomachay has been a nearby accommodation, a house, and this site, according to Bernabé Cobo (1653) it was originally called Quinua Puquio (the source of quinoa), "a fountain of two springs near Tambomachay. " 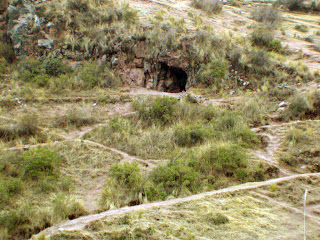 Cave in Tambomachay
The complex is set in a stunning scenery embedded in the foothills of the mountain, carefully built around an underground spring water, a tribute to water as a source of life. Integration into the landscape is so successful that the complex seems to be part of it: not just a place where you can contemplate nature, Tambomachay is indeed part of the landscape. 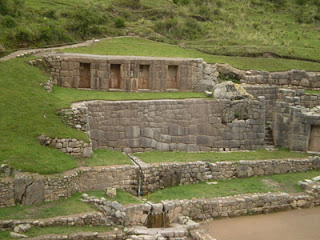 The main complex consists of four walls that define terraces built on the hill, arranged to generate a depth effect whose layers rise from the topography. 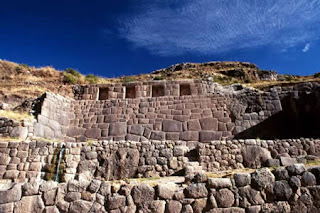 Photo courtesy of Enrique Aguilar
The building uses the famous Inca stone masonry composed of irregular blocks finely carved and impressively assembled, although their quality is not as perfect as that found in some temples of Cusco. 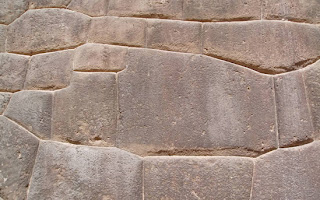 Photo courtesy of boletoturisticocusco.com
On the upper terrace four trapezoidal niches are located approximately 2 meters each. According to archaeologist García Rossell, the foundations of the complex seem to indicate that it was originally an enclosed area, and in front of it a circular tower stood, probably for defense and communication.
"Everything suggests that the location of the ruins has been one of the favorite places for residences of the Incas, a kind of resort homes, while at the same time was one of the pillars of the defense system of the valley of Cusco" he mentions. 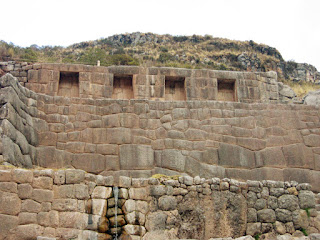 At the bottom, the so called "Inca baths" are located, a liturgical fountain in which two canals are artistically carved, pouring water already for centuries, every day of the year, every hour of the day.

According to the American researcher Jerry Fairley, the Inca construction controls groundwater discharge between two limestone cliffs. The stone walls collect and filter the water, slowing its discharge and achieving a continuous and controlled flow. 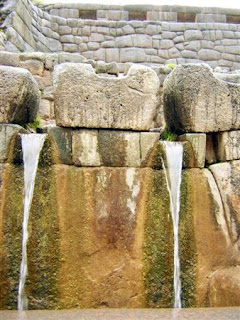 To the right of the complex some small steps are located, preceded by a wall that has two dissimilar-size niches. Below there is a portico of double jamb, often used in other Inca constructions for give hierarchy to the entrance. Next there is a small enclosure that serves as a prelude to the spring. 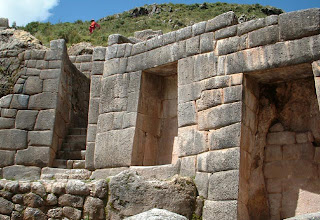 Tambomachay is an interesting complex, but unfortunately most of the thousands of tourists who visit it a year, usually spend no more than 15 minutes on the site. However, looking it closely, it is notable for its profound significance, the complexity of the stonework around the spring, the meticulous knowledge of the natural environment, the powerful aesthetics yet integrated to the landscape, the simple spirituality that transmits the sound of water, and the technological inventiveness which interacts with the earth.

This is also an example of the topophilia of the Inca society, which is clearly expressed in the sober and powerful simplicity of its architecture. 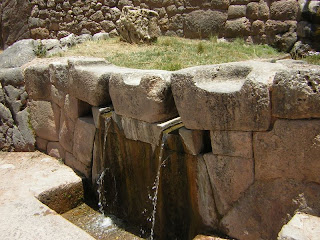 "Topophilia... is useful to include broadly all of the human being's affective ties with the material environment... The response to environment may be primarly aesthetic: it may then vary from the fleeting pleasure one gets from a view to the equally fleeting but far more intense sense of beauty that is suddenly revealed..."

Posted by Carlos Zeballos at 12:32 PM