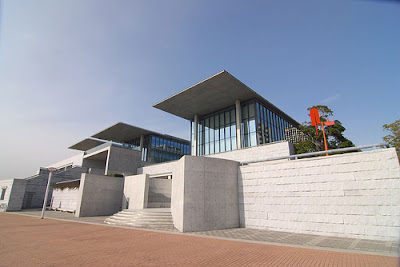 Expanding itself from the coast to the mountainside, Kobe, with its million and a half inhabitants, is one of the most modern cities and attractive ports of Japan. Located in the Osaka Bay, its industrial activity is based on industries such as shipyards, rubber material, chemicals, sugar and sake. The region is rich in growing fruits, vegetables, rice and tea.

However, the first image we have from Kobe is the earthquake that on January 17, 1995 devastated the city, particularly the Hyogo Awaji area. The quake, with an intensity of 7.3 degrees on the Richter scale had much tragic consequences. More than 6000 people lost their lives, modern infrastructure and buildings collapsed and entire neighborhoods were destroyed either by the earthquake or the fires that followed.

Although the city has literally risen from the ashes like a phoenix and is now more alive than ever, many of the reconstruction works were carried without considering the memory of the city, losing forever some of the little urban and architectural heritage which survived the bombings of World War II.


Unlike these works, Tadao Ando proposed to recover one of the most important aspects in the collective memory: the city's relationship with the sea. It was a happy coincidence that both the Hyogo Museum of Art (winner of an international competition) as well as the Kobe Waterfront Plaza (commissioned by the City of Kobe) were deigned by Ando, ​​who treated them as an integral proposal. 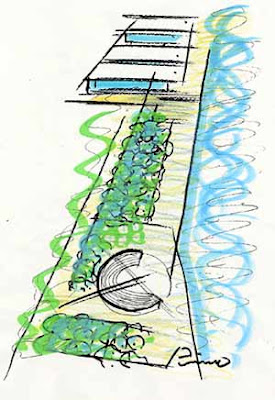 
This proposed urban development consisted of a complex of housing for the victims, a museum of modern art and an extensive park, located in an old port area in Hyogo, destroyed by the earthquake. 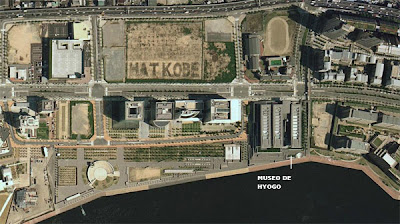 Ando, ​​like many others in Kobe,has not forgotten the experience of the earthquake. The "Kobe Waterfront Plaza", besides being a large recreation area with trees, sport and walking areas as well as an outdoor auditorium neighboring the sea, it can also be used as a reserve area for refugees and a fire barrier. 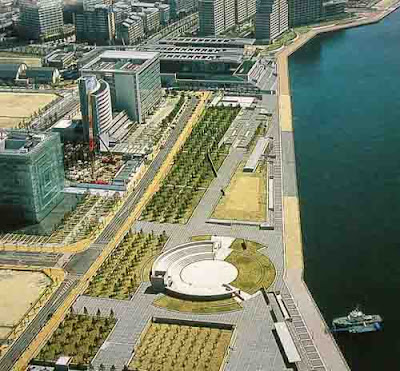 "The external exhibition space is designed to be larger and richer in variety compared to conventional museums" says Ando. "The Waterfront Plaza is the core of the local community ... With the round plaza in its center, the stairs that gently shift levels and self-supporting the wall that tactfully manipulates the view to the sea, produce a diversified spatial sequence... The plaza connects the public space at the museum's base platform  in both visual and spatial series to create a water park with a spread of 500 meters along the border. " 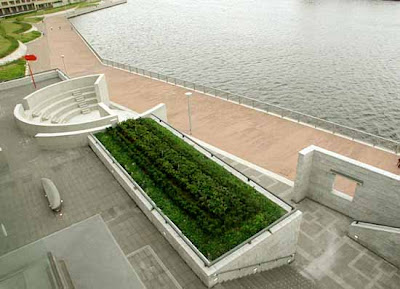 View of the circular plaza outside the museum
Photo Carlos Zeballos


Unlike his other projects, this time the architect opted for a more severe and sober language that transmits an image of security, strength and durability, contrasting the devastating images of the disaster. The approach to the building from the city is achieved from an elegant footbridge. As the buildings show a more opaque face towards the city, Ando provides a pedestrian scale by means of a groove and a rough stone arch, contrasting with the polished dark volume that forms the rest of building. 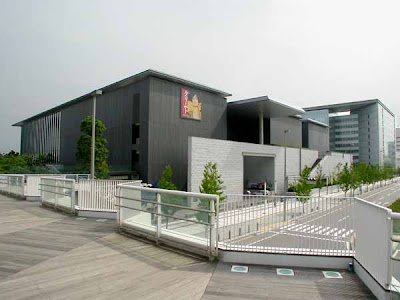 Approaching the building from the pedestrian bridge
Photo Carlos Zeballos


Also, contrasting with the building massiveness, the other end of the boxes are visually opened to the seascape, by means of generous windows. In turn, the roof extends with wide eaves (a similar gesture to the museum designed by the same architect in Fort Woth, Texas, USA), creating a cozy terrace with gardens, and stairs, spreading into the bay. 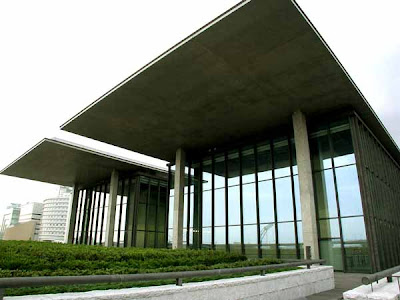 The museum rests on a white polished granite platform upon which the three glass boxes are arranged in parallel, each of which encloses a concrete block. The space between the two boxes of glass and concrete is occupied by a surrounding gallery that in turn allows the enjoyment of landscape views.

One of the volumes, the wing of the gallery, is more separated than the others, leading to a passage running through the museum and providing a visual and physical connection between the Kobe mountains and the sea. 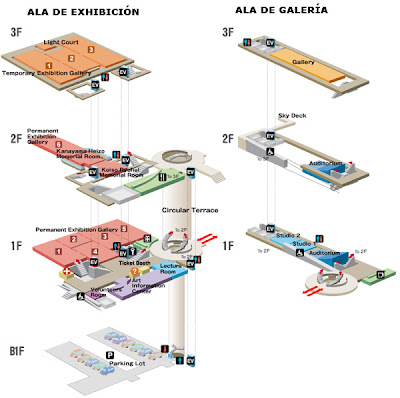 Distribution of the museum.
Image courtesy of the Hyogo Prefectural Museum of Art

This street is crossed by bridges and suspended plazas, allowing an easy communication between the different components of the museum building. 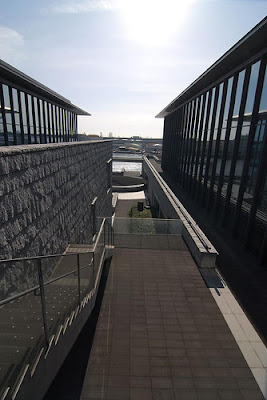 In the middle of this street, is a light well, which houses a set of spiral staircases. 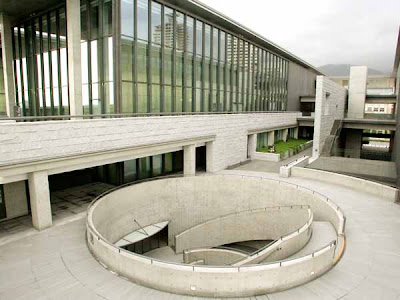 This device, besides providing natural light to the different levels and parking area -along with numerous other exquisite details that are typical in the work of this Japanese architect- adds a touch of grace to the severity manifested in the formal vocabulary of the rest of the building. 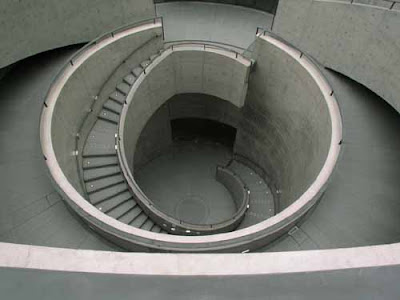 Detail of the external benches outside.

The interior of the Hyogo Prefectural Museum of Modern Art is remarkably minimalist. As he did in the Church of Light in Osaka, the austerity in the use of colors and materials (concrete, stone, steel and glass) stresses the majesty of space and light, which Ando manipulates to provide users with numerous sensations of scale and tone, and at the same time is a perfect setting to host modern art, often colorful and uniquely  and stridently shaped. 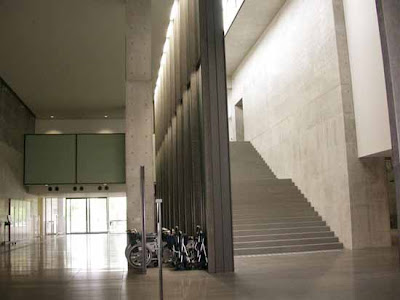 Inside the museum
Photo C. Zeballos

This time, the museum presents an exhibition of the Austrian painter Gustav Klimt . Founder of the Vienna Secession, Klimt (1862-1918) is the most important painter of the Art Nouveau movement. His works are full of color and eroticism, by introducing many organic forms taken from nature, meticulously decorated in golden tones. 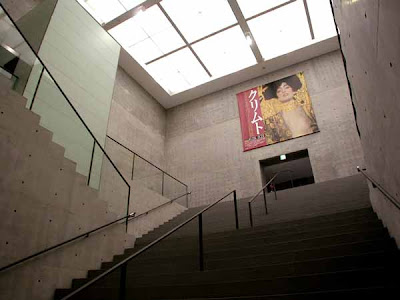 Judith Playing in the poster exhibition

The exhibition featured many of his sketches of undoubted skill, as well as some of their belongings, including his nightstand, his particular and colorful costumes and interesting photographs.
His work includes an enormous painting murals installation including Greek themes and symbolic nudes. Among his most famous works is the remarkable portrait of his beloved Emilie Flöge called Judith, and the Nuda Veritas (Naked Truth).

Looking closely at the painting, impressionist influence can be seen, since the painting is made up of fine strokes violet, yellow, pink, blue, achieving a smooth and harmonious effect .

At this time, a murmur interrupts the quiet atmosphere of the museum ...

It is the master Ando himself, who has come to the museum and gives a short speech to the stunned audience!

Tadao Ando is a highly respected celebrity in Japan, a society that loves protocol and reverence. He is very spontaneous with Japanese students, though somewhat sullen with foreigners. Still, he gladly accepted a postcard from Machu Picchu that I had carried with me in my bag that day, just by chance.


-  OTHER WORKS BY TADAO ANDO
Posted by Carlos Zeballos at 4:29 PM