CHANDIGARH AND LE CORBUSIER (I) 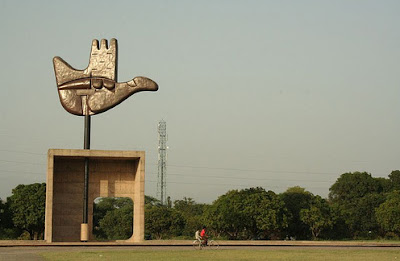 Chandigarh is an atypical city in India, unlike the typical urban maze that characterizes cities in neighboring provinces. It is a city full of gardens and parks, wide roads, modern architecture. Chandigarh was the only urban project executed by Le Corbusier, the most influential master of modern architecture, who put all his  effort, heart and soul, in order to fulfill it, from 1951 until his death in 1965. Chandigarh is an impressive legacy of urbanism, landscape design, architecture, sculpture, painting and interior design of the prolific Swiss master has left;  it is an exceptional, utopian city, which remarkable architecture made it a candidate to be declared World Heritage Site by UNESCO .

This article, dedicated to the work of Le Corbusier in India, will be divided into two parts. In the first one, I will discuss the history of Chandigarh, its birth as a city, Le Corbusier's involvement and the major aspects of its urban proposal. In the next post, we will review the main exponents of Corbusian architecture in Chandigarh, especially on the Capitol. 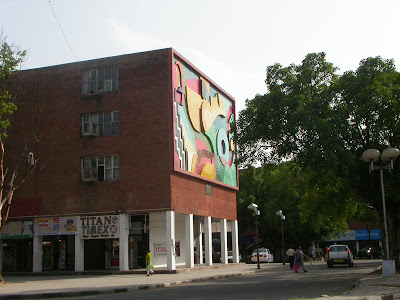 A mixed-use blocks decorated with a mosaic of Le Corbusier. Photo C. Zeballos


The Mongol invasions from the 15th century left not only beautiful architectural jewels such as the Taj Mahal and Jaisalmer, but fundamentally a strong Muslim presence in northern India, a predominantly Hindu country. For this reason, after its independence from the British in 1947 , and to the dismay of Gandhi, the country was divided into two, and Pakistan  was born as Muslim country to the northwest and northeast of Hindu India (later the northeast part also become independent of Pakistan, giving rise to Bangladesh).

Perhaps the most traumatic effect of this division was the fracture of the Punjab province in India, whose historic capital Lahore, was ceded to Pakistan. In addition, the Indian cities of the province became increasingly overcrowded by millions of refugees coming from the north, and the religious-political frictions between the two countries had already left a horrific toll of half a million dead.

In this dramatic context, Prime Minister Nehru decided in 1947 to create a new capital for the Punjab and Haryana provinces, and called it Chandigarh  (चंडीगढ़), meaning "Chandi Fortress", in honor of a fortress temple dedicated to Goddess Chandi that was located nearby. 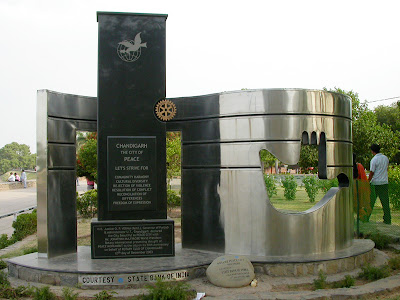 Monument to Peace,  at the entrance of the waterfront park at Sukhna Lake. More than the shape of the monument, I was interested in the inscription it houses: "Chandigarh, the City of Peace. Let's strive for: community harmony, cultural diversity, rejection of violence, resolution of conflict, reconciliation of differences, freedom of expression." In an area of continuous religious political frictions that aspiration takes on particular significance. Photo C. Zeballos
WHY LE CORBUSIER?


When India became independent, it was found that there were native no trained professionals on city planning. Some nationalists suggested that the city should be based on the Mansara Shilpa Shastras, some ancient architectural treatises over 3000 years old, while others suggested to hire a foreign western professional in order to create a city as a symbol of the future.
The commission would be given to American architects Matthew Nowicki, and Albert Mayer, who produced a picturesque fan-shaped proposal, borrowing ideas from the Ebenezer Howard's Garden City. However. Nowicki tragically perished in a plane crash and, following Mayer's resignation, the task fell to the hands of the famous Swiss architect Le Corbusier. 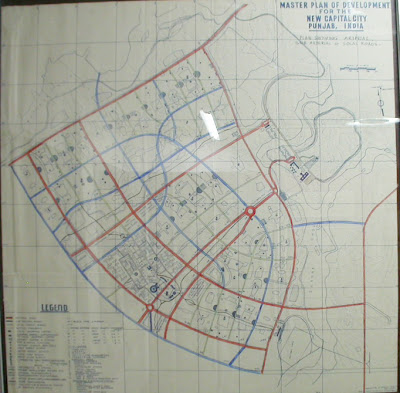 For his part, Charles-Edouard Jeanneret-Gris (Le Corbusier, 1887-1965), was opposed to the Howard's concept of Garden City and sharply criticized the concept of the American suburb, which he called "the organized slavery of capitalist society, that leads to isolated individualism and to the destruction of the collective spirit. " Influential self-taught architect, Le Corbusier had developed new concepts of architecture that was implemented in various housing, institutional and religious projects. His ideas about urbanism have been equally influential, mainly based on the decongestion and densification of urban centers, providing fast vehicular routes and increasing green areas, and they were mainly discussed at the International Congress of Modern Architecture, CIAM. However, Le Corbusier had not had a chance to implement them. 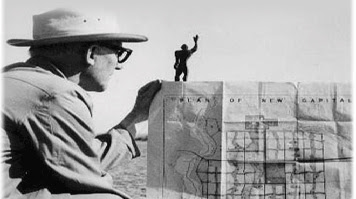 The vision of the Swiss master perfectly matched Nehru's ambitions of a modern India , and for that reason he was very well welcomed. In 1951 Le Corbusier assumed the role of "spiritual director" of the project and called for a team composed of his French cousin Pierre Jeanerette , the Englishmen Maxwell Fry and Jane Drew and about twenty enthusiastic young Indian architects, who developed a new project , abandoning the one made by Mayer.

The plan, conceived for a city of 500,000, is based on a rectangular grid adapted to field conditions. The basic unit was the "Sector", conceived as self-sufficient and introverted, subdivided into neighborhood units of about 150 families. 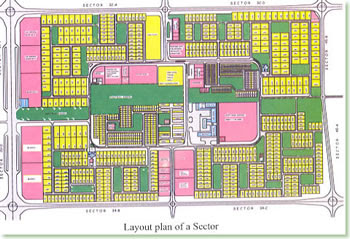 One of the sectors in which the city was divided.

These sectors were linked by a network of streets called "the 7Vs". The "Vs" are pathways hierarchically organized  according to the intensity of the traffic flow that they support. Thus, V1 are national roads; V2 conduce to the special facilities; V3 are high speed avenues that cross the city leading to the local equipment V4, V5 are  neighborhood ways, the V6, domestic paths, the  V7 are pedestrian paths and the V8, subsequently added, are bikeways (Le Corbusier joked: "the 7Vs that are actually 8").

Each 1200 * 800 meters sector is linked to a V2 or V3 high-speed way. It is crossed from east to west by a V4 shopping street, which connects to other adjacent sectors, and to a V5 neighborhood way from north to south. V7 walkways connect to the fringes of parks and green areas. 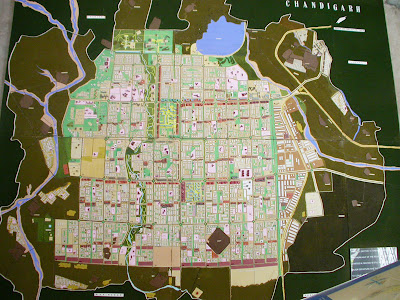 Based on 4 main functions (living, working, moving and keeping a healthy body and spirit), the Corbusian proposal  makes an analogy between Chandigarh and the human body: the head is the Capitol (Sector 1), the heart the Central Area (Sector 17), the lungs were the Leisure Valley, parks and green areas, the brain, the universities and schools, the circulatory system were 7Vs ways and the digestive system, the industry.

Located in the far north, is the most important monument area and contains the most representative buildings of the city. Because of its importance we will discuss it in the next post. 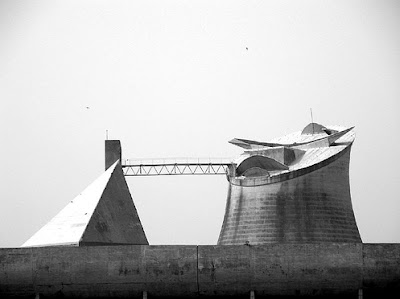 Located at the junction of two main V2 roads, it is divided into two areas: the southern area is designated for the administration  and the northern sector for civic functions. This distribution separates the pedestrian and vehicular traffic. 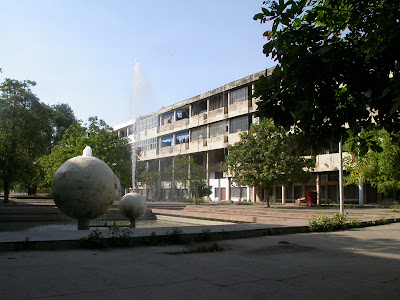 One of the mixed-use blocks in the central area. Photo  C. Zeballos

It consists of a series of concrete blocks of 4 levels, arranged along four pedestrian ways that converge in a square or chowk, where are the most important civic and commercial buildings are located (in this blog have commented in other cases of  chowks in Bhakdapur Darbar in Nepal and in Jaisalmer , India).
As for the landscaping, the space includes pools designed by M. Sharman and the vegetation, that in summer months is essential. 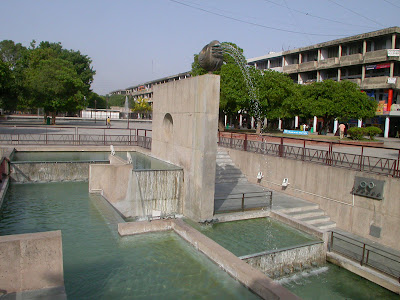 Located at the junction of two V2 boulevards, is composed of a Museum, whose architecture will also be discussed in the next post. 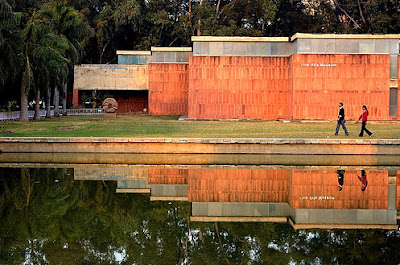 The Vallée des loisirs is a huge linear park that runs throughout the city and it is conceived as a more informal cultural and recreational area, in which Le Corbusier included outdoor theaters, monuments and other landscape design features. 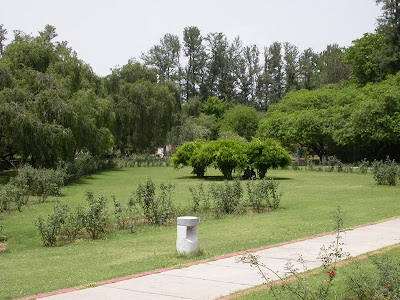 This huge reservoir of water located in Sector 1 was designed as a haven away from the noise of the city, in which Le Corbusier dreamed to contemplate the reflection of the Himalayas. Accompanying the lake is a nice, 25 m wide and 5 km long grove, which is usually very popular with families on weekends. 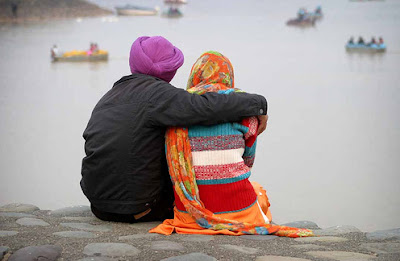 "Love is in the air" in the Sukhna Lake photo courtesy of babasteve. 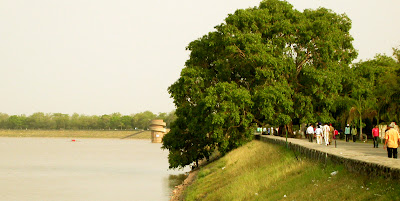 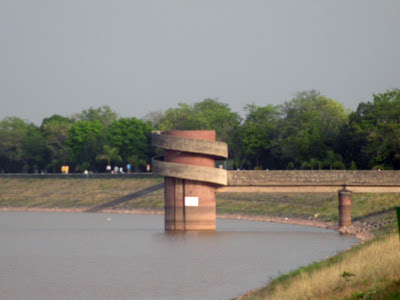 The grrove in the lakefront. Curiously, access to this viewpoint cylindrical on the lake was closed because it had lately become a popular place for suicide. Photo C. Zeballos

In his book "Urban Planning in the Third World. The Chandigarh Experience" (1982), Madhu Sarin presents a sharp critique of the project for this city. Sarin  presents Le Corbusier as proud and arrogant, more focused on applying the CIAM abstract models than to address the specific problems of the Indian population for which the city was designed.  He accuses Le Corbusier of having rejected previous studies have favored a formalistic and aesthetic conception, without social or cultural considerations. Sarin explains in detail the numerous contradictions presented in the model, such as the system of land tenure, the informal occupation of peripheral sectors and the incompatibility problems of commercial and housing uses, which mainly affect the poorest.
In a similar vein, Ravi Kalia in his book "Chandigarh, The making of an Indian city" (1987), states that Chandigarh was a city "designed, but not planned", because it focused on the physical-spatial design of its urban fabric, but not considered issues such as productivity, reducing social tensions, economic integration of social classes and regional integration.
I must agree with Sarin on something, that Chandigarh is a city for the car, and walking around, especially in summer, is a torture. The Capitol monumental area is so far from the center that its access is often difficult for the city's population. Furthermore, although the physical structure of the city has remained, the original approach of separation of functions has proved unhelpful and unsuitable to Indian culture, and as a consequence in many parts of the city the original use has been varied, incorporating, for example, open markets. 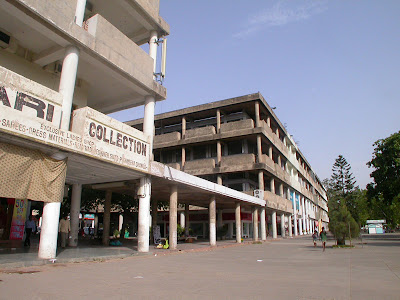 Use in some blocks have been modified. C. Photo Zeballos

However, the socioeconomic figures show Chandigarh as an emerging city with the highest income per capita and the highest Human Development Index in the country. It is also, since July 2007, the first "smoke-free city" in India. This coincides with my overall impression, reinforced by interviews I conducted to the local people of various social levels. The consensus is that Chandigarh is an organized, efficient and very special city,  in which their inhabitants live proudly, with a superior quality of life than neighboring cities. Not to mention the aesthetic richness of its architecture, not only the Corbusian one, but the one developed by Indian architects and designers in subsequent years.

In any case, it is always interesting to compare opinions of Indian experts who know more deeply about their reality and problems, specially because Western literature has tended to discuss superficially on Chandigarh, almost worshiping the work of Le Corbusier which, while plausible in many respects, has left other serious questions unsolved. 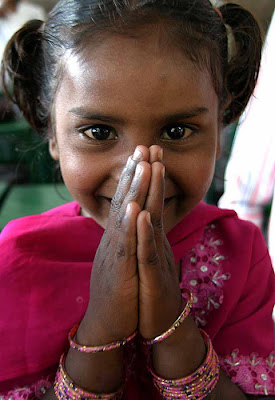 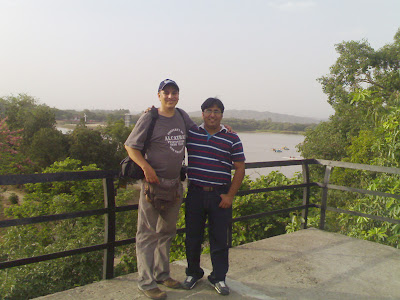 Standing next to my cordial host Varun Sengal , who very kindly and without knowing me previously, he accompanied me on a tour around the city.
Posted by Carlos Zeballos at 1:12 PM