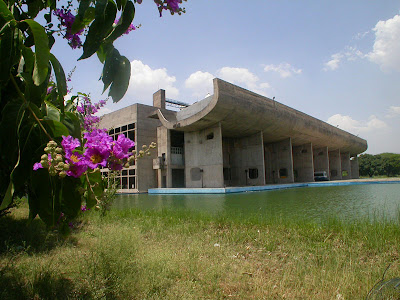 This second part is devoted to the architectural work of Le Corbusier in Chandigarh, is a complement to our previous post on the city's urban design.


The Capitol buildings in Chandigarh are the most important monumental complex in this city and some of the most interesting examples of Le Corbusier's work, although there are other of his buildings scattered throughout the city. The novel conceptual development and the thoroughness and detail evident in each building are typical of a Swiss watchmaker (actually, that was the profession of Le Corbusier in his youth) and demonstrate the commitment and love that the master devoted in his work. 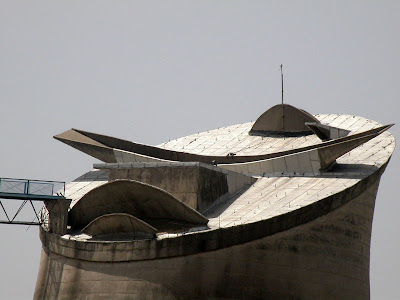 Detail of the Assembly Palace's coverage .
Unless otherwise indicated, all photos in this article belong to C. Zeballos


Isolated from the rest of the city, located in the north foothills of the Himalayas, and separated from it by parks and highways, the entire Capitol represents the head of Chandigarh, in an analogy with the human body that was explained in the previous article .
While the scale of the complex exceeded the buildings functional requirements, its monumentality was necessary to symbolize the Prime Minister Nehru's vision, who hoped to overcome the glory and fame of Lahore, the ancient capital of Punjab ceded to Pakistan; a goal which, at least in the western world, has been achieved.
Asymmetrically arranged in a huge open area, the buildings of the Capitol area represent the powers of the democratic state and are comprised by: the Assembly (legislative), the Courts (judiciary), the Secretariat (executive) and accompanied by monuments such as the Open Hand and the Tower of Shadows. Here, Le Corbusier demonstrates is mastery in the use of the concrete, while reaffirming his conception of architecture as an element imposed to nature, achieving harmony and balance though contrast. 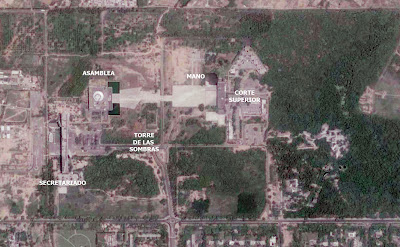 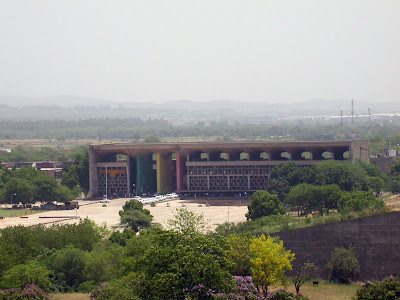 Court of Justice from the Secretariat.

The Superior Court of Justice was the first building to be finished. It consists of an L-shaped block, framed by a concrete cover that functions as a large umbrella that unfolds gracefully in the shape of arches, and that somehow establishes an reference to the covers of the havelis in Mughal architecture. This space between the double cover offers a smooth ventilation in the summer and protection during the rainy season. Le Corbusier used to say that both the sun and the rain are components of the architecture, and therefore applied in this building his famous concept of brise-soleil, or the inclusion of parasols as permanent and constituent elements of the building. Despite this, the functional distribution of the courts and the judges offices had to be shifted to prevent  the sun from direct insolation. 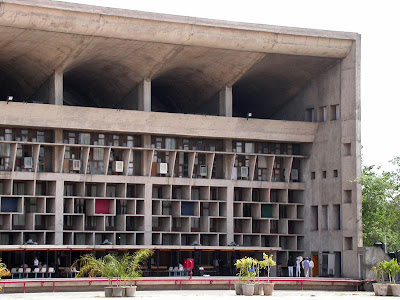 Detail of the facade of the Court, showing different grid compositions.

The main elevation faces a square where most vehicles park and where the entry controls are located. The rear facade looks at the esplanade facing the Assembly. Both spaces are spatially linked  through a portico formed by three large painted concrete columns (in contrast to the other exposed concrete elements). 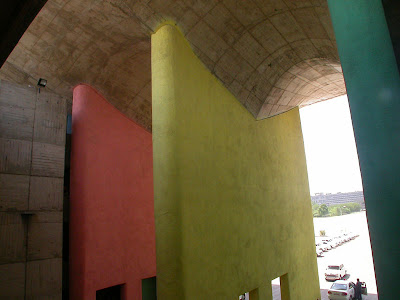 Detail of the concrete parasol and its encounter with the plates.


The building contains 8 high courts, supreme court separated by the above mentioned plates . The courts are spaces of 8 * 8 * 12 meters, in which Le Corbusier applied another of his well-known principles, the modulation system known as modulor .
A system of ramps connecting the various offices of the judicial bureaucracy, while offering impressive views of the entire Capitol complex. 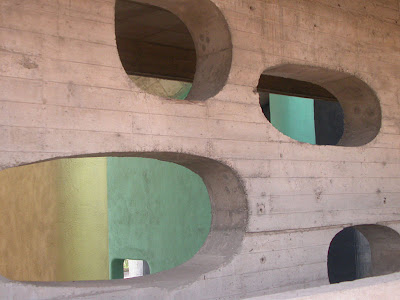 Detail the perforations in the ramps.


On the roof, Le Corbusier devised a set of outdoor terraces, which unfortunately today are used as warehouses. 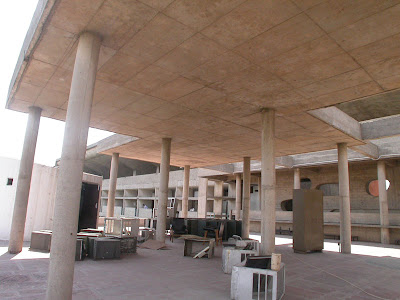 Rooftop terraces of the courts.


It also had to create a special parking area for the judges, who did not agreed park next to the general public. 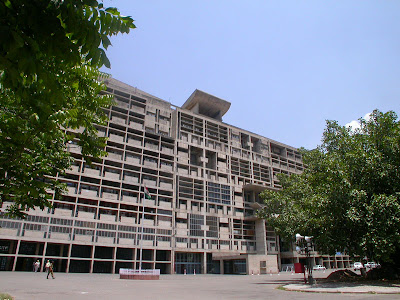 Main facade of the Secretariat.

Located at the other end of the Capitol, the so-called Secretariat is a long, 8-story, 245 m long and 42 high block, that houses  the administrative offices of two provinces, Punjab and Haryana. Its shape resembles Le Corbusier's Housing Units, called Unités. 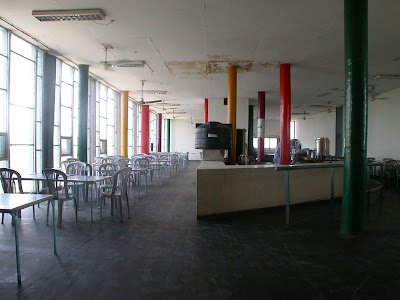 Interior of dining in the secretariat. Note the separation of the windows from the structure, one of Le Corbusier's favorite principles .


With numerous elements that alter and dynamize its repetitive modulated character, the block  is an analogy to classical architecture: it is composed of a base, a body and a capital. Le Corbusier wanted to include his famous piles at the base and was about to give up the whole project when he was rejected (yes, he was very proud). Fortunately an intermediate alternative was found and the offices in the first floors were removed to make way for a gallery that offers shade for pedestrians. 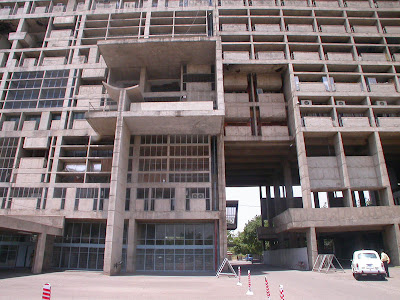 Details of how the facade is dynamized by a sculptural element that enriches the composition.


In contrast to the light grid of the facade, there is a massive sculptural element, pierced by small windows, that houses a series of internal ramps. 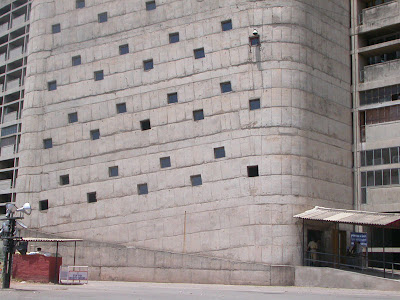 Similarly, on the roof there is another recurring element in Corbusian architecture: the roof-garden, which was designed to compensate the ground that the building takes away from nature, and is composed of a series of sculptural and symbolic elements that used to have a civic role. Unfortunately today this area is closed for safety reasons (it was the first time in my life that I took pictures escorted by an armed soldier). 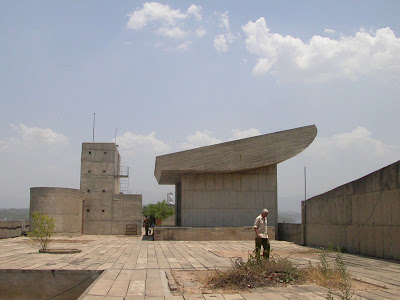 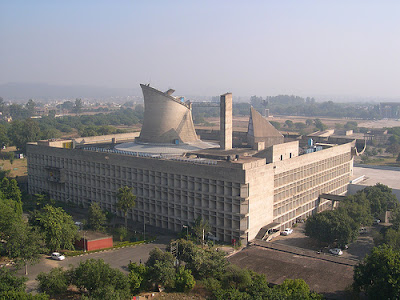 
Perhaps the most emblematic building of the complex, is aligned on the axis of the Capitol. It is a large rectangular block that reaches 38 m at its highest point. Instead two legislative houses of curved forms are linked by a foyer. 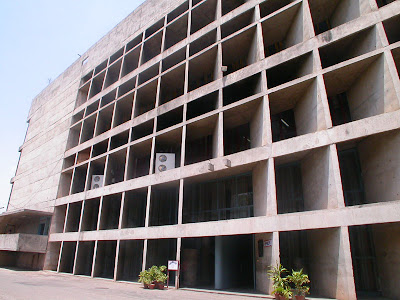 The front grid is rotated to avoid direct sunlight

Around the square there is a huge concrete parasol, whose monumental form is reflected on a pond, a detail used by Le Corbusier to give lightness to the building, gaving the impression of a large ship. 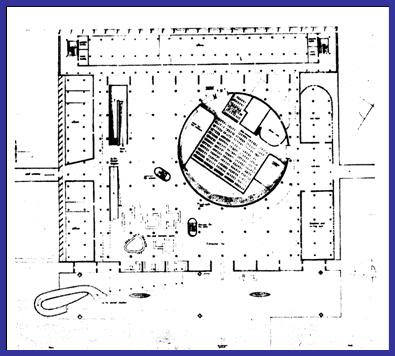 But the most significant aspect of the building is the coverage of the legislative chambers, formed by a pyramidal prism in the case of the Council Chambers and a sculptural hyperbolic paraboloid to the House of Assembly. It is said that Le Corbusier was inspired by a cooling chimneys saw in Ahmedabad and also by his fascination for the Indian bulls. 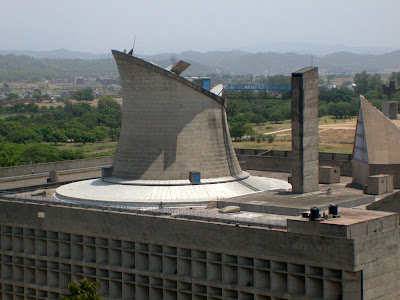 Game volume on the terrace of the Assembly


The scale and magnificence of the Assembly Hall is spectacular, and personally, is the vault that has impressed me most, along with the Pantheon in Rome. Unfortunately it was not allowed to take pictures, but still doubt I would have managed to capture the majesty of this space.

Painted black, it highlights the dramatic game of light, that gives the space generating a sense of solemnity. 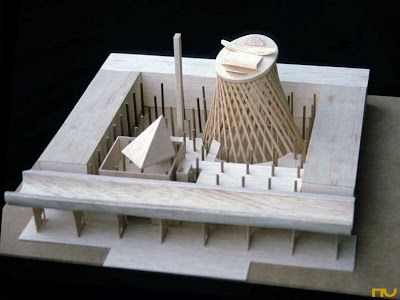 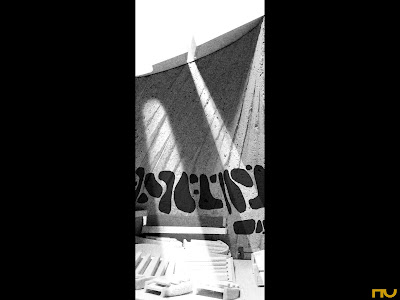 Interesting structural models and lighting, courtesy of the Polytechnic University of Catalonia


The seats of legislators, of colorful tapestries, surrounding the Congress president and are arranged in a horseshoe layout. Outside, the building's doors are adorned with colorful paintings by the talented, versatile and workaholic Le Corbusier. 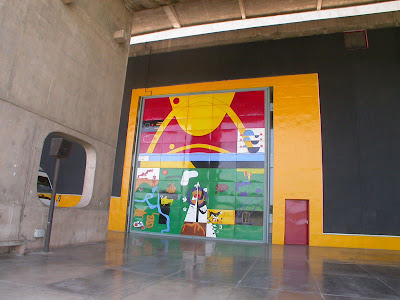 Pictorial work of Le Corbusier in the door of the Assembly

Designed to study the solar movement, this building served to Le Corbusier to support his thesis that "it is possible to control the sunlight in the 4 corners of a building, play with it even in a hot country and finally obtain low temperatures" . 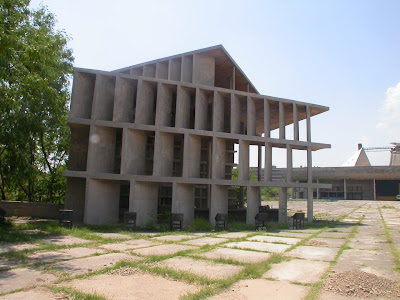 Detail of the tower of the shadows. Behind the Assembly building 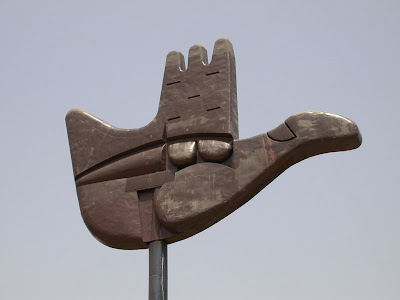 This interesting composition, which is both a dove and an open hand ready to give, became the symbol of Chandigarh. This mobile sculpture that rotates according to the wind direction, represents the synthesis of the Swiss architect philosophy. 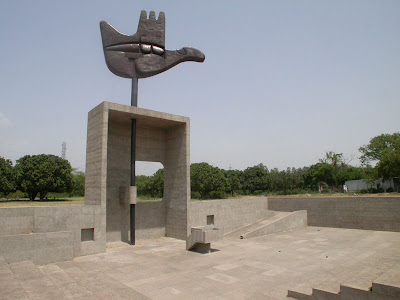 A few weeks before he died while swimming in the Mediterranean Sea in August 1965, Le Corbusier wrote a letter called Mise au point, which says:


"This symbol of the Open Hand, open to receive the wealth created, to distribute to the peoples of the world, must be the symbol of our age. Before I find myself one day (a little later on) in the celestial spheres amid the stars of God Almighty. I shall be happy to see at Chandigarh, in front of the Himalayas, which rise up straight upon the horizon, this Open Hand, which marks for père Corbu a deed, a certain distance covered, from you, André Malraux, from you, my associates, from you, my friends. I ask help in realizing this symbol of the Open Hand in the skies of Chandigarh, a city desired by Nehru. Gandhi's disciple." 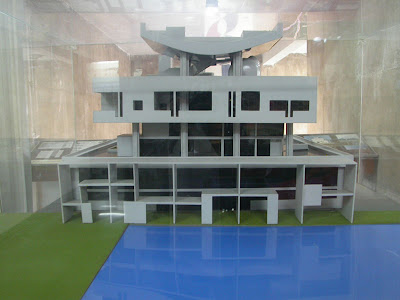 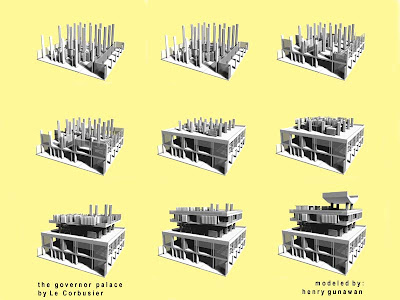 3D Model of the Governor's Palace, made ​​by Henry Gunawan.


Another building that was not realized was the Museum of Knowledge, an "Electronic laboratory for scientific decision making" where the user was able to interact with information stored in electronic media: words, sounds , colors, movies, etc. This is another example that his ideas were decades ahead with respect to his colleagues, Le Corbusier proposed the type of equipment that ultimately Toyo Ito built  in his Sendai Mediatheque 50 years later.

Press here to see a video of the Capitol, produced by architect Louis Gualtieri.


The Capitol is set candidate to be declared World Heritage Site by UNESCO. 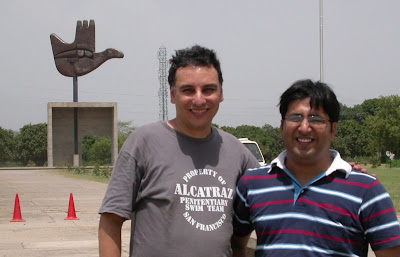 Posted by Carlos Zeballos at 8:08 PM