I. M. PEI AND THE LOUVRE MUSEUM

This second part dedicated to the Louvre Museum is focused on its contemporary remodeling, since the first  post was devoted to the creation and evolution of the Palais du Louvre .

The Louvre Pyramid, designed by Ieoh Ming Pei is an iconic landmark and represents the insertion of modernity in a historic setting. Controversial, hated and loved, the Louvre Pyramid has become a place where contemporary architectural landscape of Paris in the collective memory of Paris and even in literature, especially in the also controversial Da Vinci Code . 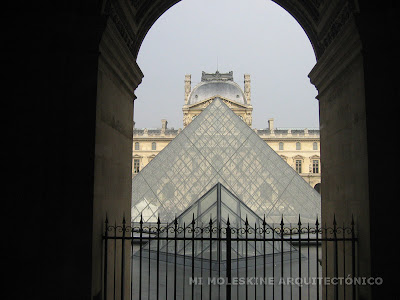 Following the establishment of the Third Republic in 1870, until early 1980 the Louvre Museum hosted a number of functions in addition to the museum, such as the Ministry of Finance. Moreover, the exhibition areas were separated, scattered and poorly organized, with multiple entrances that caused  chaotic circulations and lack of public services. Perhaps the worst of all was that many stored works became moldy because there was no room to display them properly. 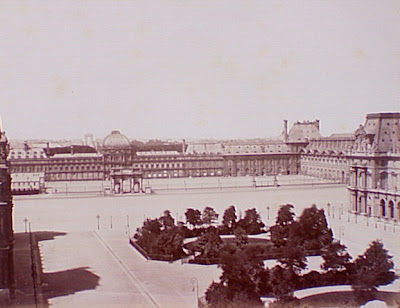 The Cour Napoleon before the intervention.


Since 1981 François Mitterrand proposed to return to Paris its prior character of world's cultural capital. For this purpose Mitterrand (nicknamed Mitte-Ramses II for his tendency to make monumental works), promoted a renewal that Paris had not seen since the times of Baron Haussmann, including such important works as the Parc de la Villette , the City of Music , the Arab World Institute , the Arch of Defense, the National Library, the Centre Pompidou and the remodeling of the Louvre Museum among others.

In order to integrate the Louvre in a  comprehensive and logical way, in 1983 Mitterrand hired the Chinese American architect I.M. Pei, who had just completed his National Gallery Washington (I hope to review this great project in this blog in the near future). 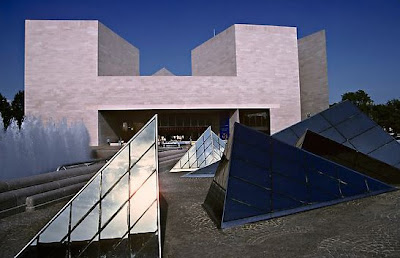 There was no contest. It is surprising that a socialist French president chose an "imperialist American" architect to remodel one of the most emblematic buildings of French architecture. Maybe that's why Pei was not very enthusiastic to accept the undertaking at first.

Pei's First schemes on the Louvre

"I told the president that I considered it a great honor, but I could not accept the job immediately. I asked him if he would give me four months to think about it -I had already decided I wanted to do this, but I wanted to see if it would possible to do it" recalled Pei with his characteristic simplicity.


After several secret visits to the Louvre, Pei met Mitterrand and convinced him that the only way to achieve an efficient functional relation between the many buildings of the museum had to be through an underground connection, assuming the Cour Napoleon as the center of gravity of the Louvre. Mitterrand was a avant-garde politician and accepted not only the underground intervention , but the intrepid proposal to place a glass pyramid at the entrance of the museum.

Aware that the architect's proposal would bring criticism from his conservative fellows, Mitterrand and Pei worked in  the project almost secretly, and when they had to start the construction, the protests were immediate. About 90% of the population of Paris (known for its anti-Americanism) was against the proposal as a century before the Parisians had opposed the Eiffel Tower. There was even an angry French woman who spat on the architect Pei . "How can you destroy the Cour Napoleon, one of the most important urban spaces not of France, but of the world?" cried the critics. Actually, that space was being used as a parking lot by the Ministry of Finance during the day and as a refuge for drug addicts at night. 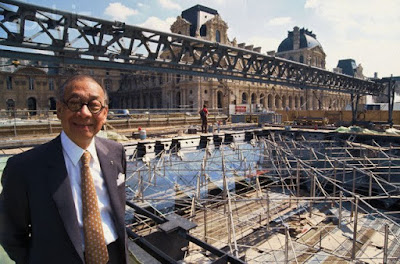 "The pyramid was a very controversial subject, back in 1984-85, as people tend to confuse the form of the pyramid of the Louvre with that in Egypt. I think it is not accurate: the Egyptian pyramid is huge, it is made of solid stone,and it  is a place for the dead. The pyramid at the Louvre is the opposite: it is made of glass, it is transparent, and it is for the living. " 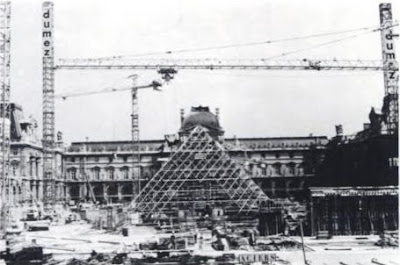 Construction of the pyramid

However, upon completion, the work was praised for his severity, functionality and clarity, as well as the architect's effort in trying to highlight the ancient work through a simple and clear geometric element. Today it is one of the main symbols of Paris.

Pei started from the premise that, rather than that the museum was located only the south wing, a large elongated building, it should cover the whole palace complex, organizing itself in a U shape around a courtyard. Then he had the idea of ​​digging up the yard Napoleon nine meters underground and there provide enough space for the storage of the works of art and loading equipment, an auditorium for 400 people, information areas, conference centers, a friendly cafe, book stores and souvenir shops. 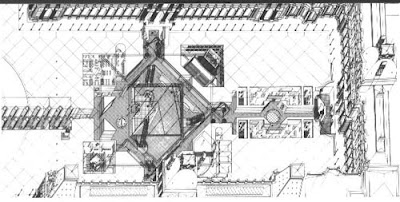 The entrance to the museum is the symbolic center around which the three pavilions of the museum are organized . 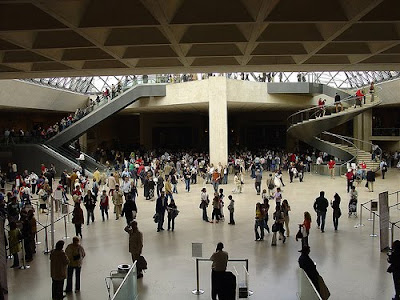 This humble gesture of digging its architecture to make it less shocking is recurring in Pei, as we saw in the Miho Museum, which we reviewed earlier in this moleskine.

Pei organized the museum in a logical way, placing the works from northern Europe (France, Germany, Netherlands) to the north, and the ones from southern Europe (Italy, Spain, Egypt) in the south pavilions. 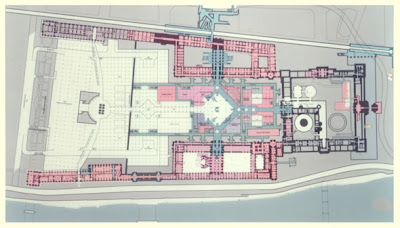 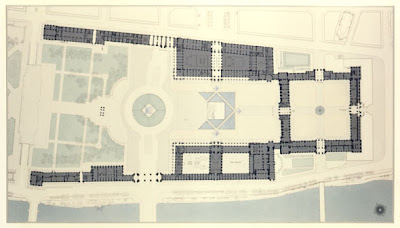 The entry should have an appropriate scale. However, he refused to build a solid element that would compete with the presence of the baroque buildings. By contrast, he chose a very discreteelement  in comparison with the enormous remodeling that was carried out underground. 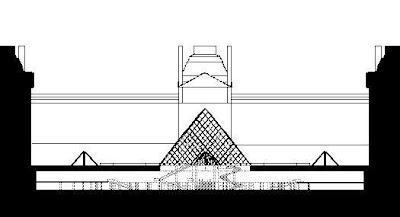 "I think the transparency of the pyramid is very important here. Not only to bring light into the reception room, but also to see the entire complex of the Louvre through it." 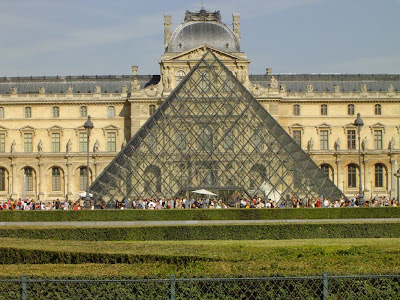 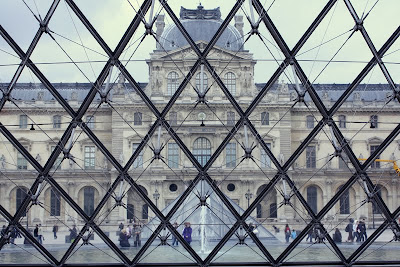 The Clock Pavilion (Pavillon de l'Horlog) seen from outside and inside the pyramid.

The 21.6 m high pyramid is based on a metal space frame, which holds  672 glass panels that define the grand access, bathed in light and a spacious and imposing space. 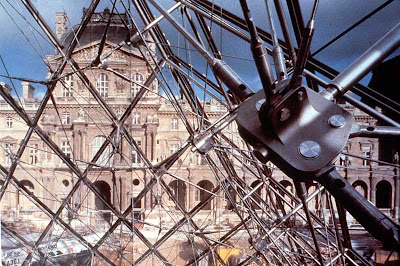 But why a pyramid, of all shapes Pei could have chosen?

"Formally, the pyramid is the more compatible figure with the Louvre's architecture. Also, it is one of the most stable forms, ensuring  its transparency ... and it is constructed of steel and metal, symbolizing a break with past traditions, it is work of our time. " 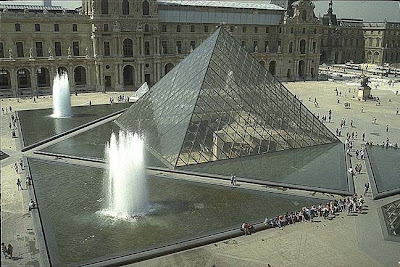 As an enthusiast for geometry, and emphasizing the symmetrical pattern of the palace, Pei transformed the old parking lot on the Cour Napoleon into a square with  triangular fountains around the pyramid and three small 5 m high pyramids, located at the north, east and south. 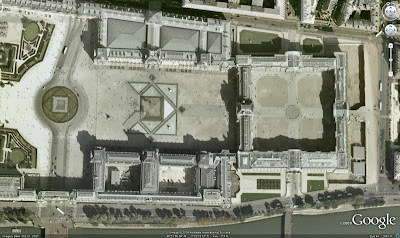 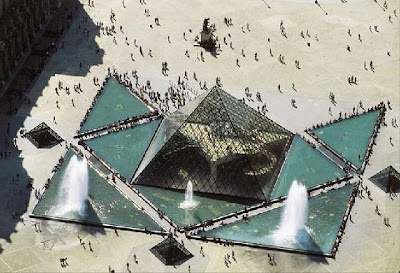 Inside, the light bathes the wide, marble-tone soft and warm spaces, elegantly housing the artwork without trying to impose to it, as he did in his Miho Museum. 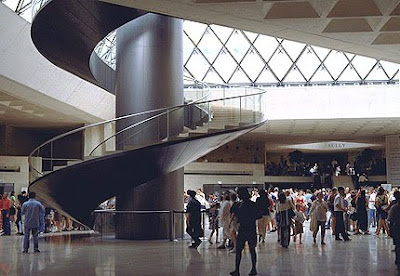 Detail of spiral staircase, a sculptural element into the museum.


Urbanely, Pei's contribution to Paris was to turn an obstacle in the circulation (as the museum previously behaved) into an important node and a bridge connecting the districts on the left bank of the Seine. 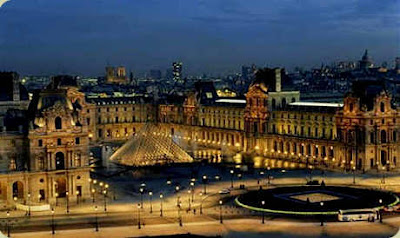 The Louvre opened its doors in 1989, and gradually the criticism became praise. That confidence led Pei to more freely develop the second phase of the renovation in 1993, including the Richelieu wing, formerly occupied by the offices of the Ministry of Finance. 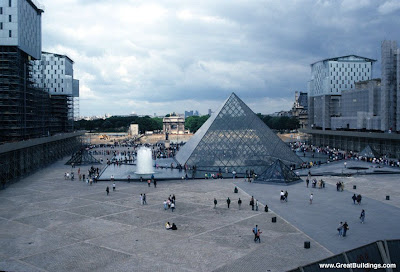 Renewal of the pyramid side wings

It was an internal architectural renovation maintaining the historical shell. For this purpose the interior and exterior facades of the museum were restored and defined 3 patios (which previously were also parking areas) and  glass-roofed internal galleries. 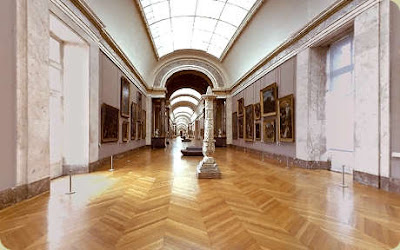 Except for some historic rooms, the offices of the ministry (which were crowded up to 6 levels) were completely remodeled to accommodate three levels, consistent with the external proportions: the lower level for sculpture, decorative arts in the second level and paintings the top level, for which skylights were installed to allow their best contemplation. 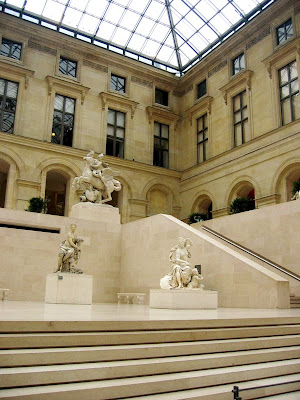 It also included a shopping center beneath the Arc du Carrousel and the famous Pyramide Inversée, was installed, an inverted pyramid that brings light to the interior while dramatically hanging just inches from a smaller stone pyramid. 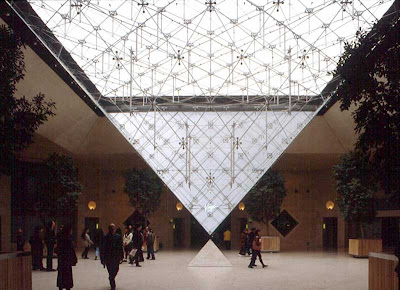 "I thought it would be fun to make a mischievious piece, something like what the French call  a "folie "(folly) and I inverted the pyramid, creating a frivolous symbol but that does not take up space."

If I had to choose 3 objects that impacted me from the very extensive collection of the Louvre, probably I would select: 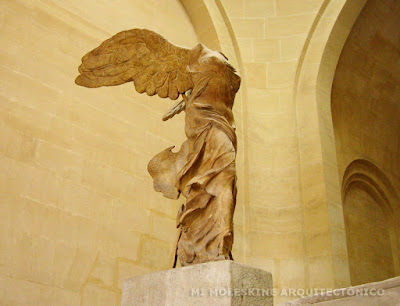 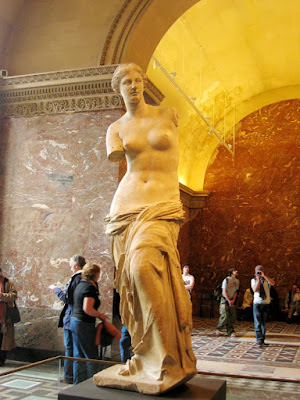 The Venus de Milo , which was higher than I thought.


And the famous Gioconda, or Mona Lisa del Giocondo, by Leonardo Da Vinci, which is smaller than I thought. This video discusses the reason for his fame.

About the controversy over the novel by Dan Brown and its relationship with the museum, please see my opinion in anecdotes of Moleskine (in Spanish, please use Google translator to the right).

OTHER WORKS OF IM PEI. 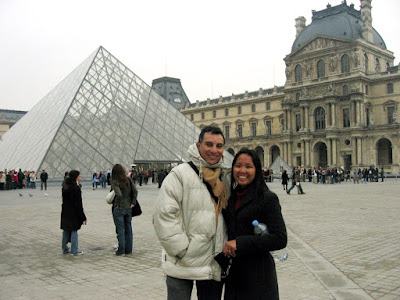 Posted by Carlos Zeballos at 9:39 AM