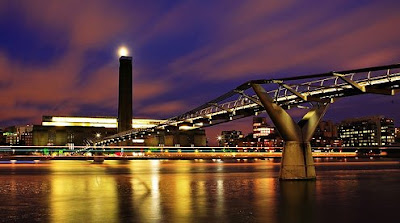 
The project of Jacques Herzog and Pierre de Meuron for the Tate Modern in London, on the bank of the Thames, reminds me in many respects to the Jewish Museum in San Francisco, by Daniel Libeskind. Both are contemporary adaptations carried out on old disused power stations, although in this case, the laureated Swiss architects opted for a more rational composition than the one proposed by the famous Polish designer. This waterfront renovation project has had a similar effect to the Guggenheim Museum in Bilbao, revitalizing physical, environmental and culturally an area that was deteriorated not long ago. 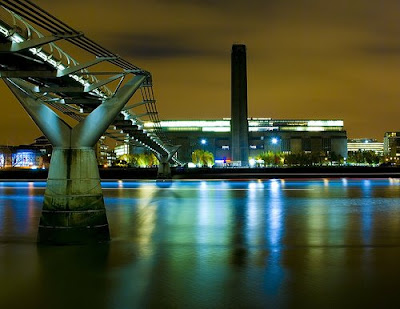 
Bankside Power Station is located in a prime location on the River Thames, enjoying a magnificent sight to the famous St. Paul Cathedral (both structures are symmetrical, presided by a vertical element in the middle:  a fireplace in the case of the station, and a huge dome in the Cathedral).
Originally designed in 1947 by Sir Giles Gilbert Scott (who also designed the famous English red telephone box) and completed in two stages only in 1963, it is a steel structure covered with brick. The basically massive form of the building is interrupted by groups of fine, thin vertical windows that allow controlled lighting inside. 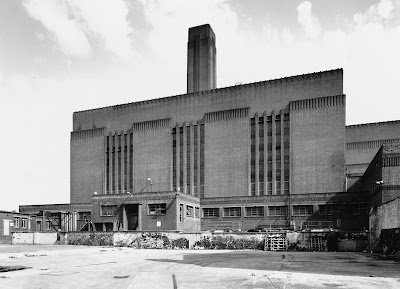 The building houses a turbine room of 152 m long and 35 m in height, and a room for smaller caldrons.
At the center, a long chimney of 99 m in height, which was intentionally made slightly smaller than the dome of St Paul's Cathedral, contrasts with the horizontality of the building. 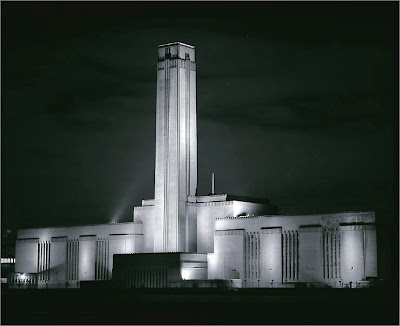 Photo courtesy of Jon May

The station ceased to operate as such in 1981, and it was often threatened to disappear due to property speculation. In fact, in 1993 it began to be demolished, but this act was finally prevented by the intervention of the BBC. 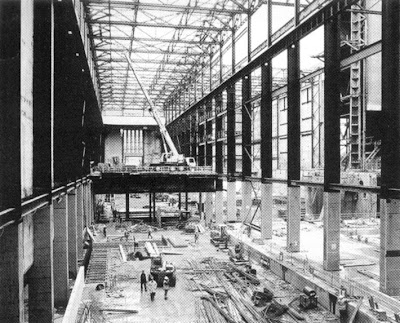 
The history of the Tate galleries dates back to the nineteenth century, when the National Gallery of British Art was created in 1847. In 1887 Sir Henry Tate was one of its major benefactors and the gallery mostly focused on Victorian art. Art collections grew until 1954 when the Tate was separated from the National Gallery and specialized in Modern Art. The gallery began to expand and was renamed as Tate Britain, then opened  branches such as the Tate Liverpool (1988) and the Tate St. Ives (1993). In 1996 Tate announced the purchase of the Bankside Station and organized a competition for what would become one of their most important venues: the Tate Modern. 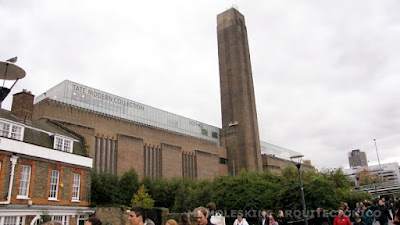 The contest, won by the architects Herzog and De Mouron, was conceived as a plan to revitalize not only the station but also the surrounding area. 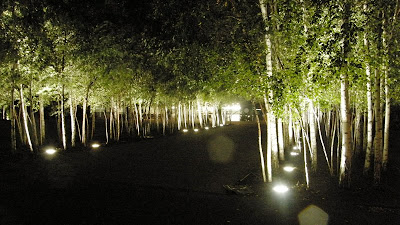 Lighting a garden before the Tate Modern

The creation of a pedestrian bridge over the Thames, called the Millennium Bridge, connects the new museum with the city center, particularly the Cathedral of St. Paul, the most important building in London. 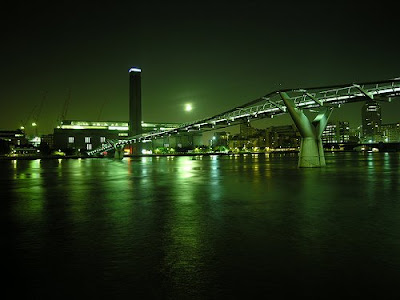 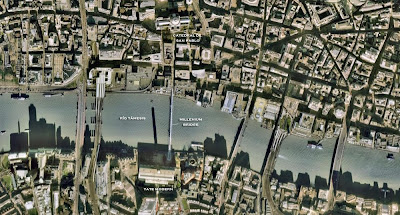 In this stunning view from Google Earth you can see the shadow of the long chimney of the Tate Modern over the Thames, and the connection with St. Paul's Cathedral across the Millennium Bridge, designed by Norman Foster.
See location on Google Maps

The proposal  Herzog and De Meuron was the only one who contemplated the preservation of the station building for the most part, considering it as a source of power and energy, which could be applied in turn to design. 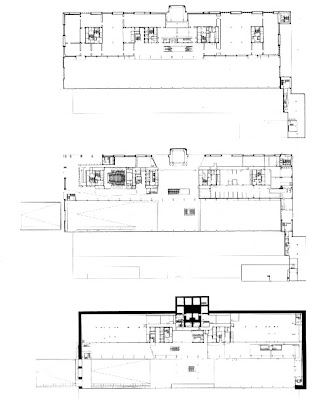 For remodeling the building the huge turbine hall was recycled as an internal square with a gentle slope,  which is accessed by stairs descending from the street level. 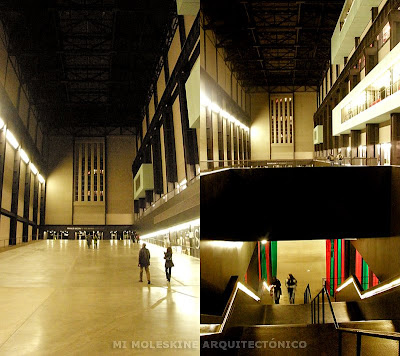 The photo at the left shows the room from the plaza level, appreciating the slope of the ramp. The right view is from the entry level, about to descend the steps.

The room receives the dramatic effect of light from the both the vertical windows and overhead lighting. This  large space is devoted to exhibitions of large sculptures or installations. Next to the square, two levels of shops have been located. 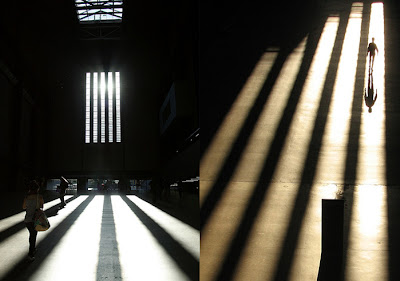 Photos courtesy of Gabo and Cejayclarck


Adjacent to the turbine hall, the boiler room has been renovated to house art galleries, arranged in three levels and organized thematically into four groups: History/Memory/Society, Nude/Action/Body, Landscape /Matter-Environment and  Still Life/Object/Real Life. 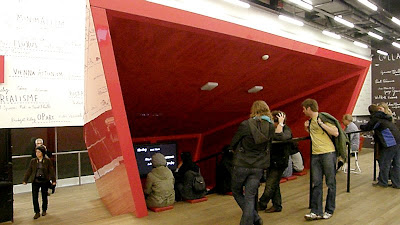 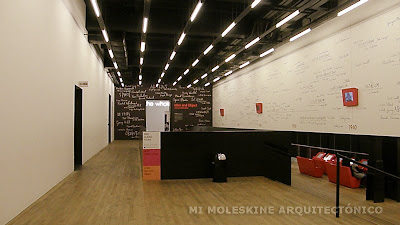 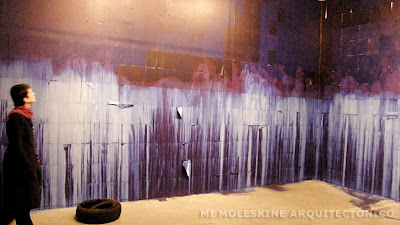 The relationship of the galleries with the large square is spatially and visually remarkable, successfully combining monumentality and intimacy, and is highlighted by bright boxes attached to the facade of the gallery that serve as a balcony to the turbine hall. The glassy surface of these greenish balconies contrasts with the severe black metal of the structures that support the nave. 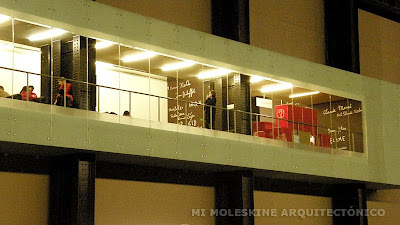 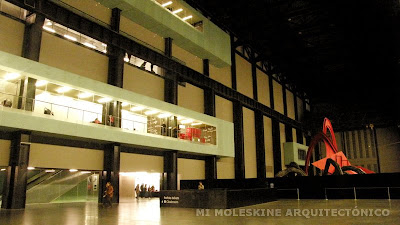 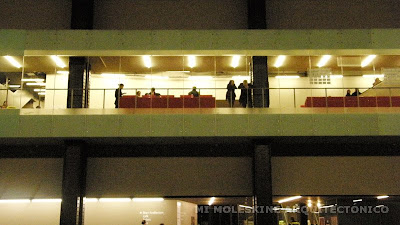 Some elements of the old station as the fuel tanks have been recycled to house art objects.

At the top, the building is crowned with a sober two-stories glass addition which houses areas for members of the Tate as well as a restaurant with stunning views of the waterfront. At night this area acts as a lamp, in contrast to the massive volume of the brick station. 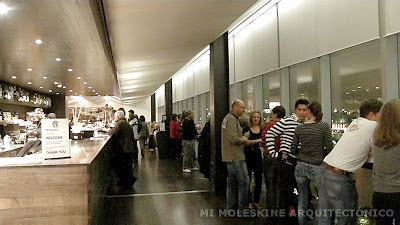 At the end of the chimney, the artist Michael Craig-Martin also placed a luminous element. This artist was responsible for the spectacular opening of the Tate Modern in 2000, using laser beams projected onto the structure.

After the enormous success of Tate Modern, with nearly 2 million visitors a year (becoming the most visited museum of modern art in England) a series of expansion projects have been planned . The most important to be built over the old oil tanks, has also been designed by Herzog and de Meuron.

The first proposal of the architects for the expansion, marked a stark contrast to the existing building. It was  glass pyramid shaped as a ziggurat, with protruding elements in the form of boxes, in several directions. 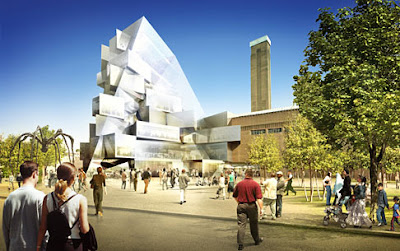 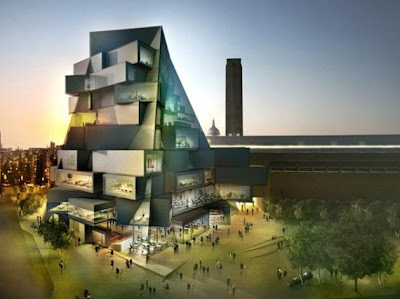 This proposal aroused much criticism in the community, so the extension was redesigned as a block pyramid whose brick facade have a dialogue with the Bankside Station. It is a fairly dynamic, although it is basically a massive volume with thin horizontal grooves. This new approach not only fits better to the surroundings and needs of the Tate Modern, but it used a number of resources that will make it environmentally efficient, conserving energy as much as 40%. 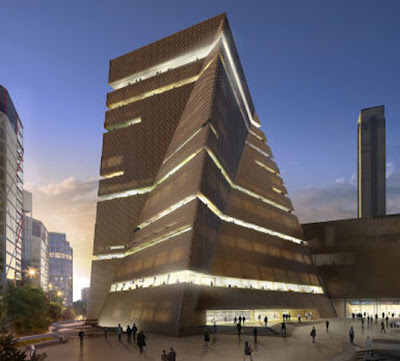 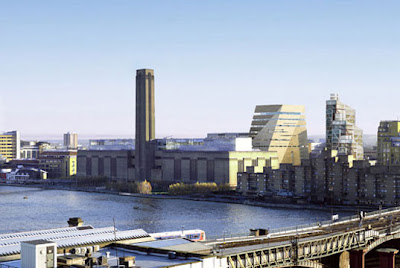 It is expected to be ready for the Olympics in 2012. 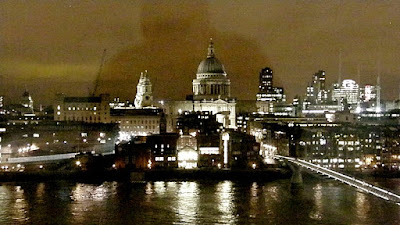 Night view of the Cathedral of St. Paul taken from the cafe at the top of Tate Modern
Posted by Carlos Zeballos at 6:35 PM