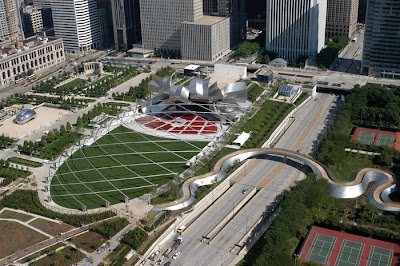 Chicago, so-called the "Windy City" (I experienced the reason of that nickname when the wind broke a couple of  umbrellas), is the second city  in the U.S. and one of the 10 most influential cities in the world. In fact, Chicago is remembered by the labor movement that led to the Haymarket Revolt and their claim for the 8-hour day (which is why we celebrate Labor Day on May 1st). They were also famous for its gangsters duringthe 30's, the blues and the Chicago Bulls. The clear urban grid meets the Lake Michigan and is broken by the Chicago River,  treasuring architectural jewels such as those of the Chicago School, the Louis Sullivan's Carson stores , Mies Van der Rohe's buildings and the Lake Shore Drive Apartments , Frank L. Wright's Robie house.

In this opportunity we will focus on the city's waterfront Development (or urban development facing water bodies), particularly on the recently remodeled or Millenium Park, located on the shores of Lake Michigan.

Since 1850 until recently, the Millennium Park was a site owned by the Illinois Central Railroad. In 1917 construction began on the adjacent Grant Park. Given the presence of railroad tracks and parking lots, these areas suffered from neglect and deterioration, despite the efforts of certain groups of neighbors to recover it. 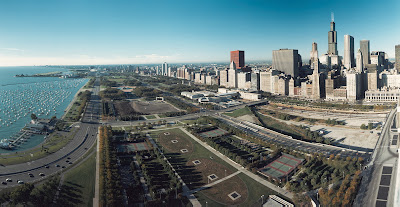 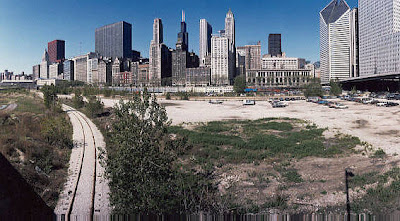 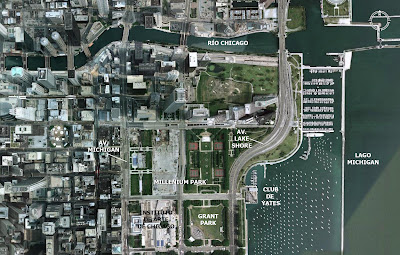 The idea of ​​converting the abandoned park into a center of social and attraction near the Lake Michigan by means of art (architecture, sculpture and music) was developed in 1997 by Mayor Richard M. Daley, and acquired a significant interest due to the participation of world-renowned architect Frank O. Gehry. The construction of the park would lasted from 1998 to 2004. 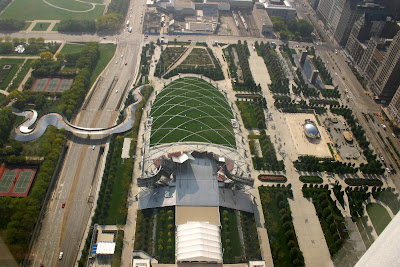 The park is divided into two areas: an area of ​​gardens, laid out like a Cartesian arrangement, parallel to  the Michigan Avenue, and the other more free, defined by a virtual elliptical "roof" and presided by Gehry's Pritzker Pavilion. The park is linked to the lake via a bridge, also designed by Gehry, that crosses over the Columbus Highway. 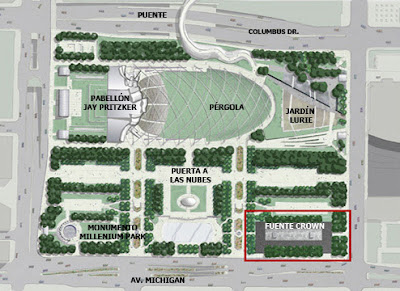 To solve the problem of the existing railway, it was decided that both the train yard as parking lots were to be built ​​under the park, so the park is considered terrace-largest in the world. 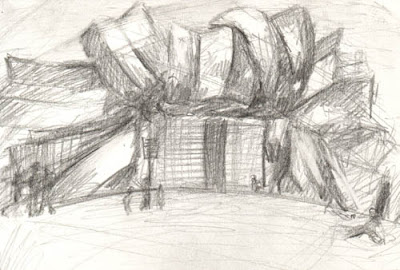 At a cost of $ 52 million (including 15 million to hire the architect) the most significant element of the park, and an icon that is preceived when approaching to the lake from the city, the Pritzker Pavilion bears the unmistakable stamp of the Canadian-American architect Frank Gehry . 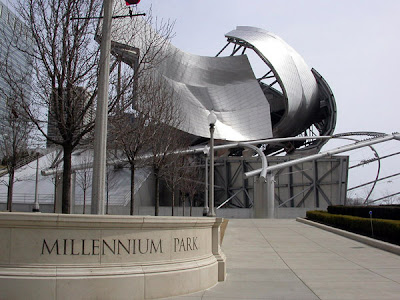 
Gehry, who in 1989 received the Pritzker Prize, the most prestigious architecture award, uses his well-known vocabulary of organic forms and sculptures, metal ribbons that twist like a silver cloud and that define the bandshell pavilion. With a capacity for 4000 seats and various acoustic and digital equipment, it is one of the most technologically advanced outdoor-concert halls  in the world. 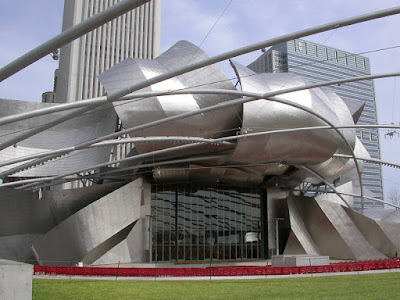 
This 40 m structure is composed of series of steel plates arranged over a metallic frame, so that its imposing, cumbersome and voluptuous presence is merely a  scenographically displayed facade. 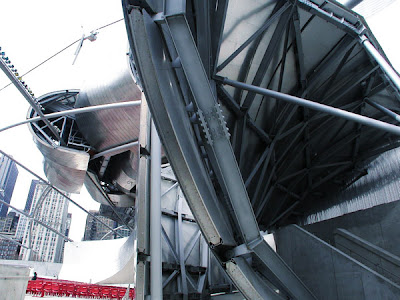 Detail of the back of the Pritzker Pavilion, where the scenographical nature of this architecture can be seen.
Photo C. Zeballos

Besides the bandshell there is an expansion  lawn that can host up to 7000 people, which has been covered with a metal tube frame that defines an elliptical space . 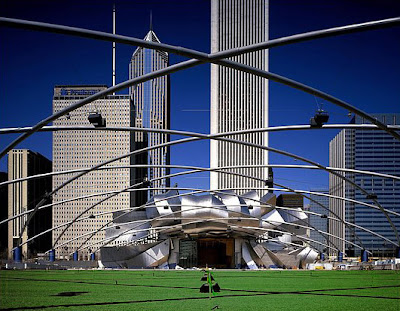 Detail of the pergola as an extension of the Pritzker Pavilion

The acoustics was developed in collaboration with the company Talaske , who first provided the conditions for the musicians to hear themselves on stage, and secondly to expand the sound to the audience with the maximum fidelity.
In that sense, the pergola has not merely a visual role but also an utilitarian purpose as it holds the speakers system that offers the audience a surround sound and the feeling of being inside a concert hall. The walls of the bandshell reverberate the sound, while a second set of speakers facing the audience spreads the sound from the stage.

Scattering of sound through the speakers in the pergola.
Image courtesy of Talaske


The bandshell is the scene of the Grant Park Music Festival, a classical music event outdoors, the only free show of its kind in the country. 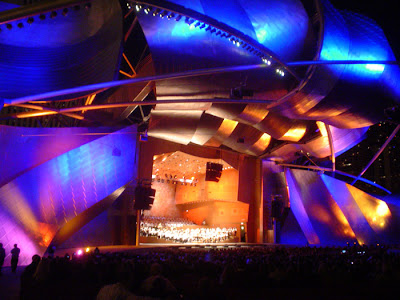 Spectacular lighting effects on the Pritzker Pavilion during a night of concert.

This unique sculpture, popularly known as "The Bean" is a 22 m long, 14 wide and 11 high element, and despite its light appearance weighs over 100 tons. Defined by its author, the award-winning Indian sculptor Anish Kapoor, as a "gateway to Chicago, a poetic idea about the city that it reflects" the work is a sculpture made of polished steel, representing a drop of mercury that falls on the square. 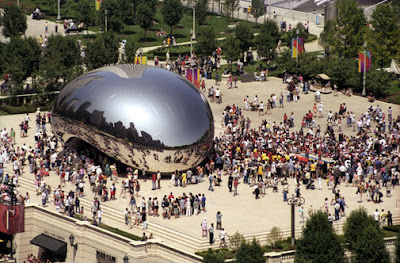 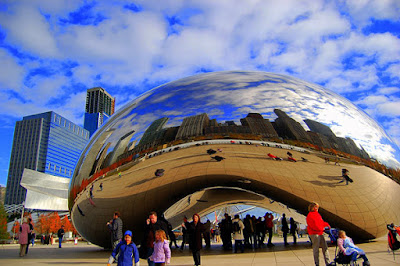 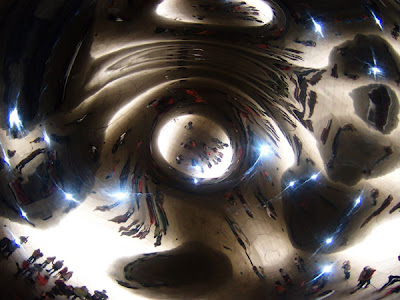 Designed by Spanish artist Jaume Plensa, the fountain is composed of an interactive installation consisting of two glass brick towers, which contain computerized LEDs that produce a series of changing images, especially related to citizens of Chicago. 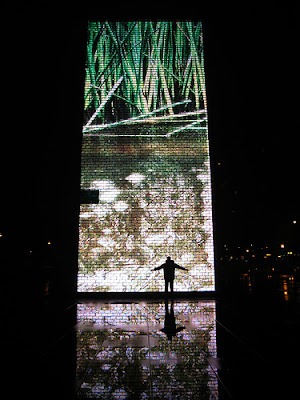 
Each of these towers is 15 meters high and 7 meters wide and 4.5 m thick. The design and construction of the sculptural group reached 17 million, 10 of which were donated by the Crown family.

When I visited the park in March 2005 they were just a couple of big screens,  like huge TVs showing changing images. But in April 2006 a water fountain of 71 m x 15 m was installed and that made this sculpture much more attractive, since it interpolates water games with the graphic images displayed. An interesting effect happens in the moment when the face on the screen makes a gesture as if he were blowing and the person's mouth poured a stream of water over the fountain. 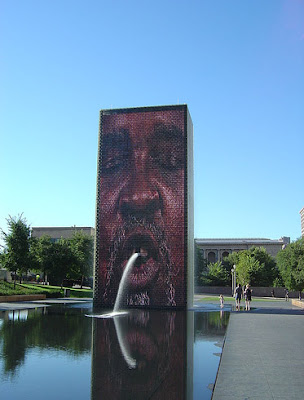 Interaction between the image and water play, photo courtesy of yewuan


Click here to see a video of the interaction of people with the fountains, which makes it very popular in summer.


Despite controversy provoked by its high cost (U.S. $ 500 million), which has tripled the original budget, in addition to having postponed its opening for 4 years (originally the Millennium Park should have been inaugurated in 2000, hence the name), Millennium Park has become the most important public space in the Chicago's lakefront, a space where people interacts with the architecture, landscape, lake, art and music. 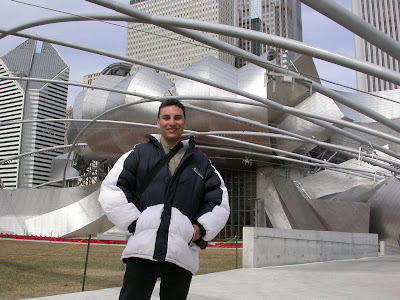 Posted by Carlos Zeballos at 5:03 PM