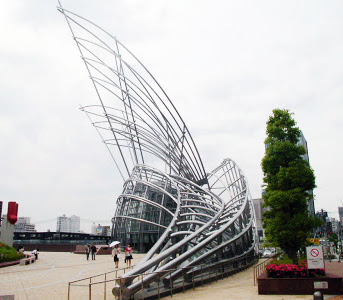 * In collaboration with Ms. Oriana Nakano, Curatorial Assistant at the National Museum Osaka 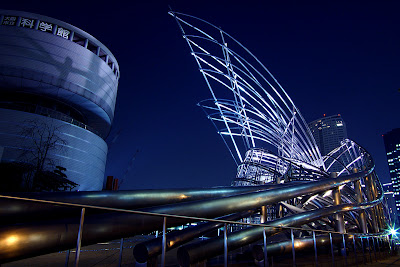 The National Museum of Art (2004), designed by Cesar Pelli in Osaka, is so different from the Petronas Towers in Kuala Lumpur, that is hard to believe at first glance that this work belongs to the same architect. While the Malaysian towers stand skyward beating world records, the museum in Osaka was developed three levels underground. While the complex in Malaysia was developed based on a meticulous and strict geometry that is clearly expressed in the form and silhouette of the towers, the museum in Japan presents an explosive, amorphous facade, completely free of geometric constraints. It is possible, however, to recognize in both examples an intention to create a significant place, to establish  a landmark that will develop the collective memory of the site. In both cases, this architect from Tucuman, Argentina, has demonstrated versatility in the development of such different solutions. 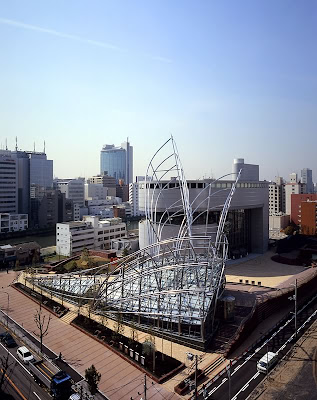 Panorama showing the Museum of Art in the foreground and the Science Museum in the background.
Photo courtesy of AIA

The World Expo'70 took place on the outskirts of Osaka, and among the facilities that were implemented for that event, the Expo Museum of Fine Arts was developed. In 1977 this building was transformed into the National Museum of Art in Osaka, dedicated to house mainly contemporary art collections. 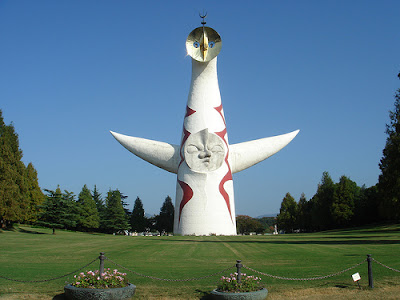 "Tower of the Sun," by Taro Okamoto monument at the Expo Park, Osaka.
Photo courtesy of girlsmell.

In 2004 the museum was moved to the east end of the city near the coast, to a location on the Nakano island (or Nakanoshima), between the rivers Tosabori and Dojima, an area renown as Osaka's Arts District.


Due to limitations of the area it was decided that this 13,500 m2 complex, should be developed underground, with two galleries for permanent and temporary installations. Due to its location in an area crisscrossed by many underground streams, and given that the building would be below the level of the rivers,  triple-layered walls were built (concrete, waterproof and the inner wall of the museum), reaching a thickness of 3 meters. This armor provides the building with additional protection against moisture and earthquakes, and because of that it has earned the nickname of "submarine".

The museum is located on the island Nakano. Google Earth Image

Aerial view of the Osaka Museum of Art, next to the elliptical building of the Osaka Science Museum .
Photo Courtesy of Pelli Clarke Pelli.


The facade, however, stands as a light structure -made of stainless steel tubes coated in titanium- that emerges from the ground level, forming a sculptural spasm that exceeds 50 m. in  height, and spreading like the wings of a mystical bird. This sculpture wraps the steel and glass lobby, which affords generous natural light to the interior. 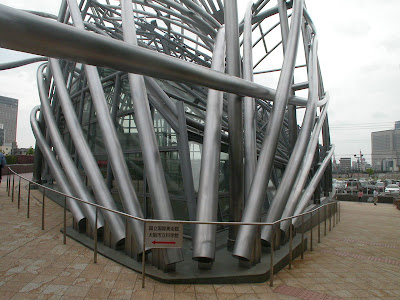 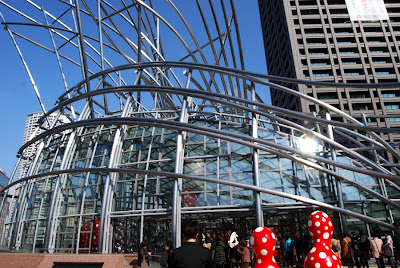 "The steel sculpture is allowed to sway, to some extent, in all directions." says Pelli. "Given its height and location, wind and earthquake design posed unique engineering challenges. Also, many of the steel tubes must penetrate the skylight glass. For these junctures, the architects designed a watertight seal with a bellows. The bellows allow the steel tube to move 4–6 inches in any direction without breaking the glass or causing leaks. " 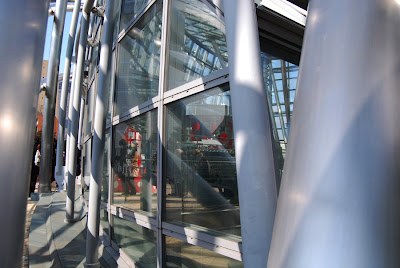 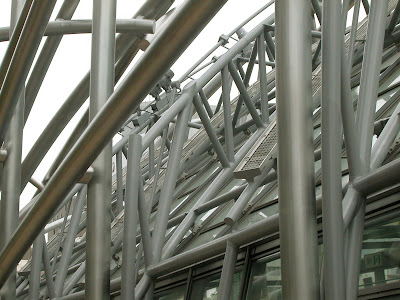 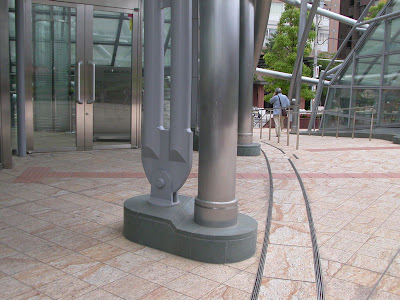 Next to the museum there is a bamboo garden. Both the garden and the structure are an allegory of a bamboo forest that used to grow naturally in the Nakanoshima Island before its urban development. 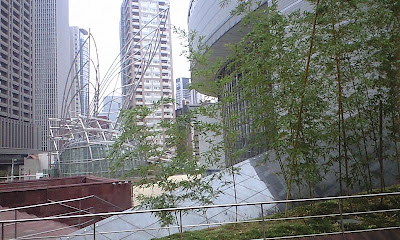 Some have criticized this dramatic rupture with the environment, but others have praised this synthesis between architecture and sculpture and the explicit feeling of freedom and contemporaneity expressed in its  facade. However, although this metal and glass structure bends and twists to form the building entrance, it does not transmit the flamboyant drama involving, for example, the works of Frank Gehry . On the contrary, the use of tubes instead of plates makes the whole element lighter and more transparent.  I would say that despite its apparent chaos, it is possible to perceive Pelli's orderly hand . 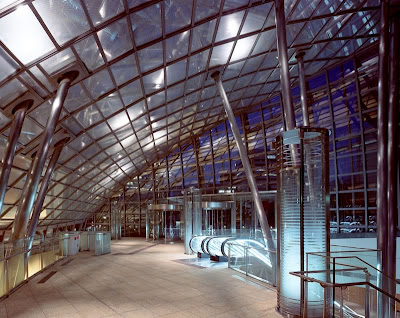 Inside the lobby. Photo courtesy of AIA 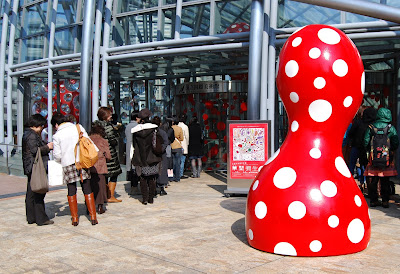 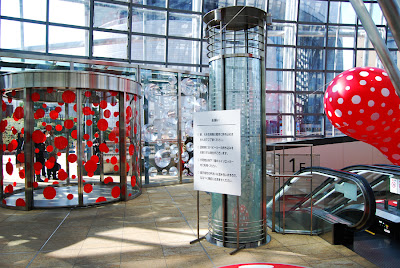 Perhaps as interesting as this external capriccio, is the spatial sensation inside this transparent lobby, a monumental space bathed in a warm and welcoming light that,  an ever-changing play of light and shadow, hits on the museum walls, coated in earthy colors. 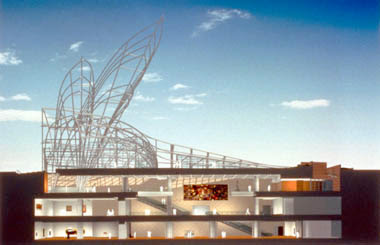 Sections of the museum.Courtesy of Pelli Clark Pelli

First floor, courtesy of the National Museum of Art, Osaka.

Dotted with nice details, such as a series of columns which flourish from a single point to the ceiling, the main function of this modern greenhouse is to provide natural light to the underground galleries. 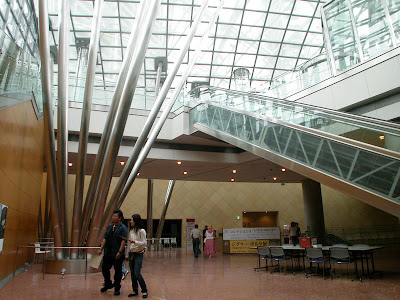 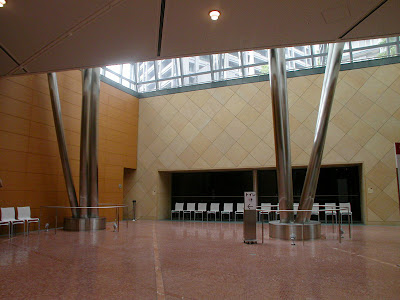 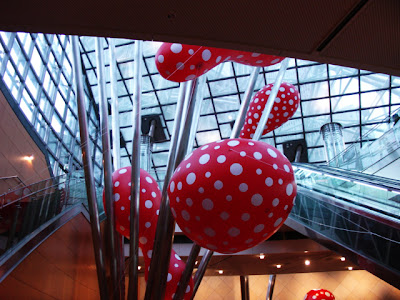 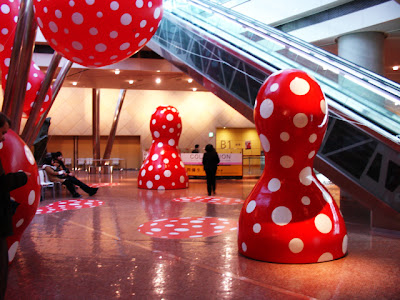 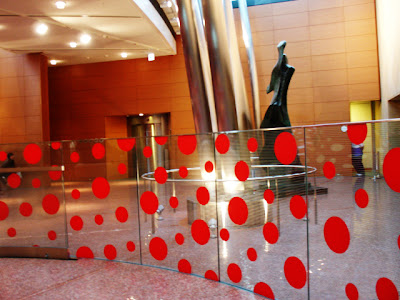 
From the glazed lobby we descend through the escalators to the galleries, located below and arranged as L-shape.

The first level houses the reception, auditorium, restaurant, offices and the souvenir shop.

First basement, courtesy of the National Museum of Art, Osaka.

The double height between this level and the first basement is an ideal space to admire an impressive work by Miró (Innocent Laughter, 1969, ceramic tiles 640 pieces, 500x1200 cm, in 1977 it was received as a gift from The Commemorative Association for the Japan World Exposition’70). 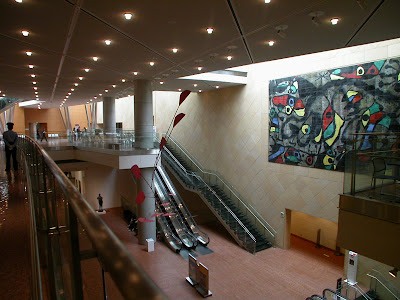 Details of the double-height living room, which houses a painting by Miró and the hanging sculpture by Alexander Calder. Photo C. Zeballos

Other remarkable works on the first level are: Jiro Takamatsu’s Study for “Shadow”, Two men (1977), pencil, colored pencil on tracing paper, to be found close to the entrance of the museum shop; Henry Moore’s Large Standing Figure: Knife Edge (1961-1976), bronze, a 1977 gift from the Agency for Cultural Affairs, which is placed close to the ticket check-point; and Alexander Calder’s London (1962), painted sheet aluminum and steel rod, a work in red suspended from the ceiling.

Second and third basement, courtesy of the National Museum of Art, Osaka. 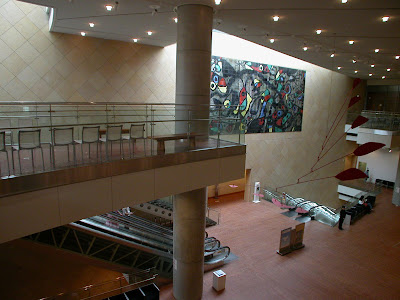 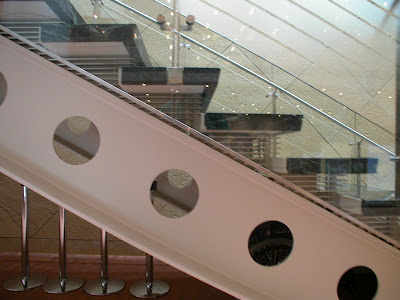 The following pictures illustrate the exhibition "Eternity of Eternal Eternity", displaying some of the works of the famous Japanese artist Yayoi Kusama. The photos are a  courtesy of Ms. Oriana Nakano. 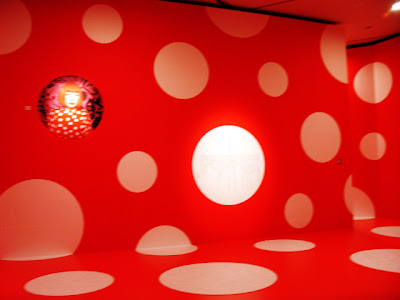 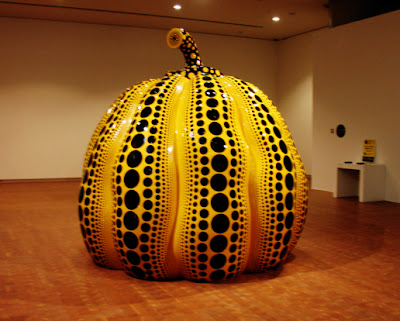 You can see more about the work of Yayoi Kusama in our post on The Watari Museum, by Mario Botta and in this post (in Spanish)


With an exterior design inspired by the life force of the bamboo and the development of contemporary art, this new facility serves well as a space for interaction between the public and art. The Art Museum is related to the Science Museum, a building that shares with the museum an elliptical plaza. In the vicinity there is a building called Nakanoshima Mitsui Building , also designed by Cesar Pelli & Associates. 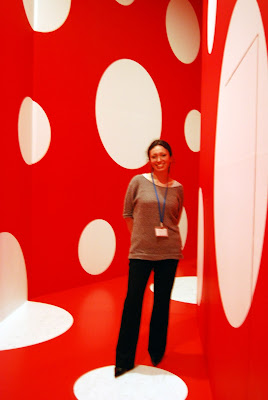 I would like to thank Ms. Oriana Nakano, Curatorial Assistant at the National Museum Osaka, for her kind collaboration in this post, particularly for the pictures on the Yayoi Kusama exhibition, since some installations are usually  difficult to photograph inside museums in Japan.
Posted by Carlos Zeballos at 4:41 PM