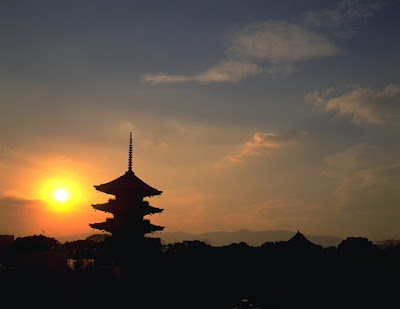 
I think that it is fundamentally necessary for people to be able to gain an understanding of their position in the present, as a section of time between the past and the future. They can gain it from the urban environment.
Kevin Lynch


Until the eighth century capitals in Japan tended to be relocated following the emperor's death. This was a very expensive tradition, but had an important relationship with Shinto religion and its relationship with nature and landscape. When Buddhism was imported from China, a new city model, centralized, geometric and regulated by Feng Shui (or Zōfuu Tokusui, as it was locally called) took place in Japan. 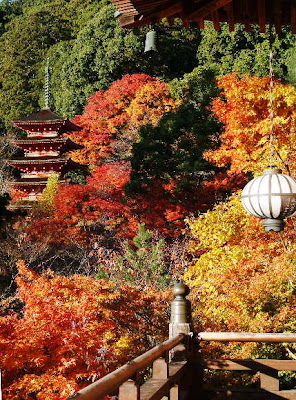 Hasedera, Nara. Japanese architecture favored the relation with nature, a tradition that continued after the import of Buddism


The Japanese capitals were modeled after Chang'an , but with one important difference: the absence of walls. In that sense, the relationship between urban planning and landscape geomancy had a closer relationship.

The structure and composition of the landscape, as defined by Feng Shui principles, delineated by Saitou and compiled by Higuchi contain the following characteristics:

1) The mountains are located the north, “like the seized head of the turtle-serpent, with undulations of the dragoon and bows of the tiger coming from the east and the west”. These mountains define a natural barrier and a space dominion that they protect.
2) A body of water exists to the south, and the slope develops smoothly towards that direction.
3) This configuration establishes a clear directionality according to the cardinal points and clearly is related to the solar movements, the resulting effects of light and the wind direction. 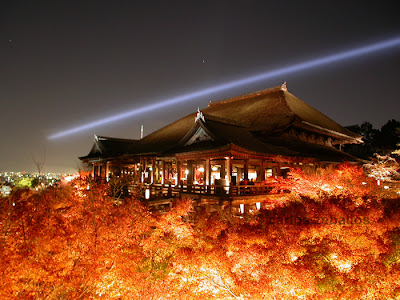 Kiyomizudera Temple, Kyoto, it is located on the eastern hills of the city.


Chang An was copied in Japan in capitals as Heijo kyo (Nara) and Heian Kyo (Kyoto), but also in cities like Naniwa, Shigaraki, Kuni. 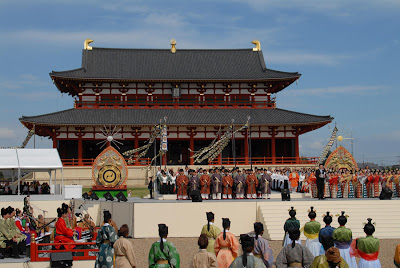 Chang An was copied in Japan in capitals like Heijo kyo (Nara) and Heian kyo (Kioto), but in addition in cities like Naniwa, Shigaraki, Kuni.

Towards 794, in an area known as Yamashiro, a man was walking on a plain surrounded by mountains in the north, east and west. Between the mountains two streams flowed into a "Y" shaped junction to form a river that ran from north to south. In the south there was a large pond  (that was filled and reclaimed for urbanization in the1970s).


That man was the emperor's assistant chief of geomancy, who had been secretly sent to inspect the site along with a group of planners. This group decided that this was the ideal place to draw the new capital, as a perfect fit with the requirements of Feng Shui. I envy this man, for he saw that which is impossible to see today. He idealized the city's master plan and the relationships between the city and its environment, between man and nature. 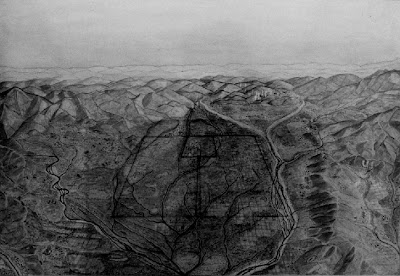 By all means, the reasons to move the capital from its previous location in Nara were not aesthetic, but political. The great power which the priests had acquired and their physical proximity to the court of the emperor Kammu, was an important obstacle for the imperial power. 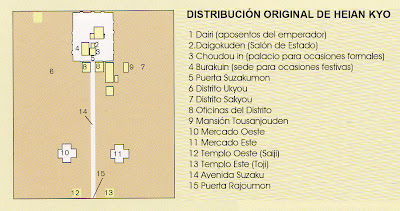 
The new capital’s border was the Kamo river and was surrounded by mountains: to the north, dedicated to Genbu, the turtle black serpent; to the east, home of the one of Seiryuu, the green dragoon and to the west, dedicated to Byakko, the white tiger. To the south, there was a water body, the Ogura pool, where the bird Suzaku lived. 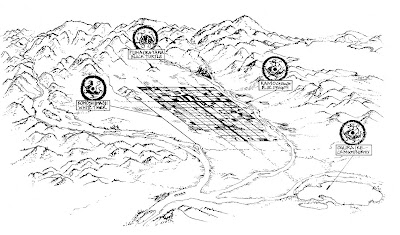 The design of the capital was similar to that of Heijō kyō. It extended 5,5 km in north-south direction and 4,7 km in East-West direction. 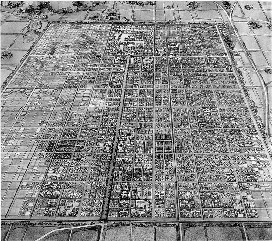 Urban location of the Imperial Palace


In the north the imperial palace was located, that was a compound of 1,4 km * 1,2 km, which enclosed a series of buildings, such as the Great Hall State or Daogokuken, whose 2/3 scale replica stands on the  Heian Shrine. 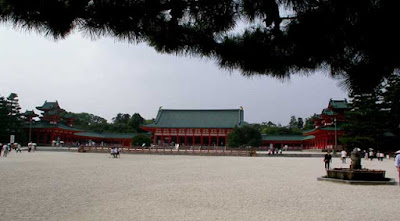 
In the center of the city, a huge 80 meters wide avenue called Suzaku Oji run from the Imperial Palace to the north to the enormous Rajomon Gate to the South. 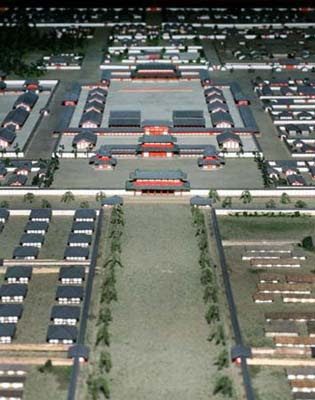 
The Rajomon or Rashomon measured 32 meters wide by 8 of depth and reached a height of 9 meters. It communicated with the city through a bridge. It was a famous door, where heroes as Taira Masamori were received with pomps and honors. Nevertheless, at the end of the Heian period the district of Ukyo was deteriorated, and the porch became ruins and mulberry of malefactors and thieves, as it is portrayed in the famous film Rashomon by Akira Kurosawa (1950) . 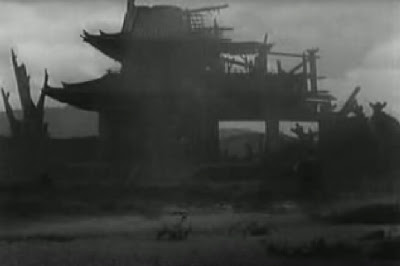 Rashomon was destroyed and in its place there is only a memorial stone. 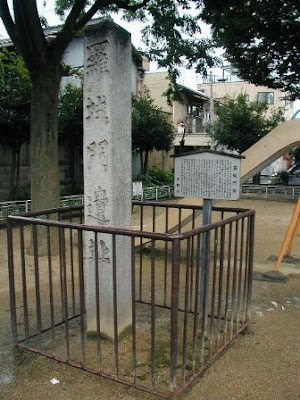 Place where once stood the Rashomon

To the sides of Rajomon had two major temples with their respective pagodas : the Temple of the West or Saiji and the Temple of the East or Toji . The first one is gone, but Toji still stands as the highest pagoda in Japan. 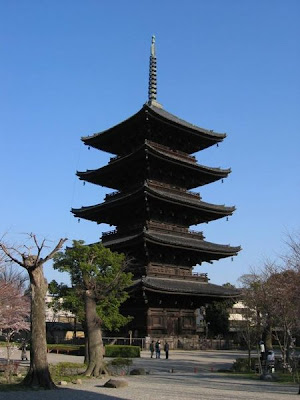 
Heian Kyo was destroyed during the bloody wars in the Japanese middle age. The original layout of Heian Kyo is gone, buried up to 3 meters under the level of the present Kyoto. The plot of the present city is much smaller to the one of the one of Heian kyo, but it is still in general, a squared plot (different to most of Japanese cities). Also, the direction of the layout, the tradition of some streets and the natural surroundings are important references in the spatial perception of the city. 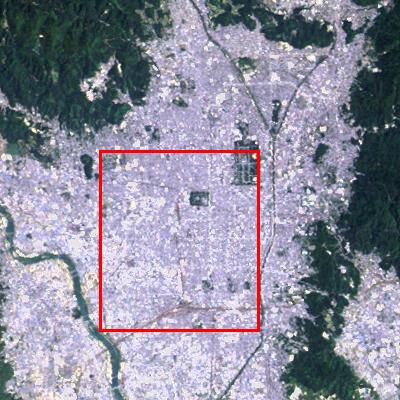 Location of Heian Kyo in the current Kyoto
Image: Wikipedia


Feng shui or Zoufuu tokusui was later used in the construction of temples, gardens, palaces and castles, some of which have been and will be commented in this blog. Also, the visual and symbolic relation of the city with mountains has been and is an important concept in the historical development of Kyoto. Numerous temples have been consecrated to the mountains (which were attributed magical and religious properties)and still today many festivals resemble this tradition. For example,  Gozan non Okubiri is a Buddhist celebration in which great bonfires are made in form of special characters, located in slopes of hills, containing prayers for the dead. This celebration is carried out in the evening of each 16 of August, and its most symbolic element is the Daimonji, that contains the Chinese character 大 (big). 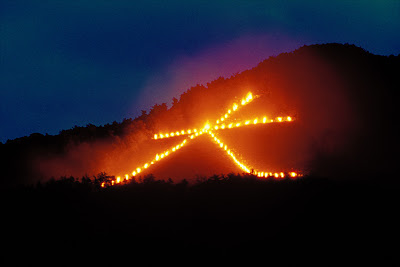 
During the rest of the year these symbols remain as silent witnesses to the pact between the city and the mountains. 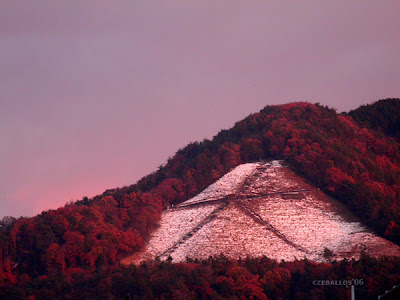 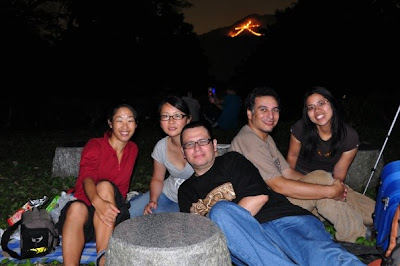 Watching the Dai Monji with my dear friends, the Perujines. We avoided the crowds from a "secret" place at the Yoshida hill. Great view, but we had to fight the mosquitoes!
Posted by Carlos Zeballos at 4:00 AM