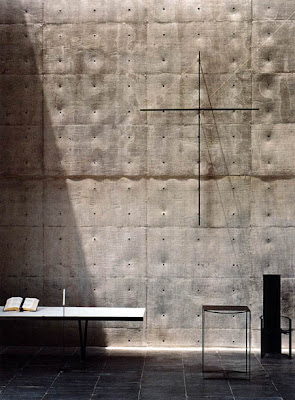 This small chapel located on Mount Rokko, near Kobe, completes the trilogy of Christian religious facilities designed by Tadao Ando in the mid-eighties. While not enjoying the same fame as the Church on the Water or the Church of Light, the chapel at Mount Rokko becomes a synthesis of its predecessors and stresses the architect’s effort to establish a link between the religious space and nature. 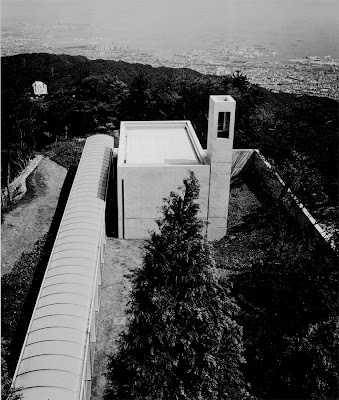 The chapel in Rokko is similar to its counterpart in Hokkaido, as it is a venue for the celebration of marriages and belongs to a hotel, unlike the Church of Light, which is devoted to preaching and prayer. While the design was made after her sisters, the construction of the chapel in Rokko (between 1985-1986) preceded the churches at Hokkaido and Ibaraki. Its location in Mount Rooko enjoys formidable views of the sea. 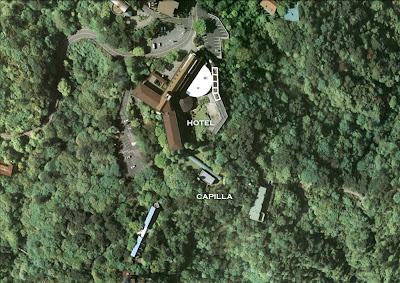 In this chapel Ando uses his usual vocabulary: simple geometry, the meticulously studied and delicate play of light and shadows, as well as the modulated exposed concrete surfaces that dialogue with the metal and glass. However, this chapel includes Western elements like the bell tower, which meets a formal rather than utilitarian role, becoming a vertical counterpoint to a predominantly horizontal composition. 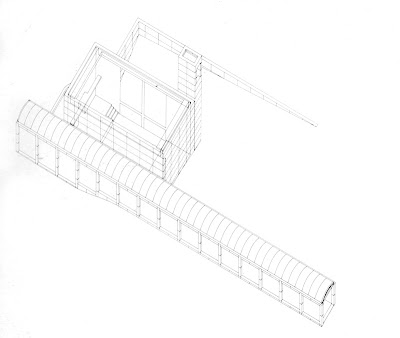 Unlike the Western church towers where the bell used to call parishioners to religious services and other events, in this case (as the guide told us) the bells are rarely played, to avoid disturbing customers of the hotel in which the chapel is located. 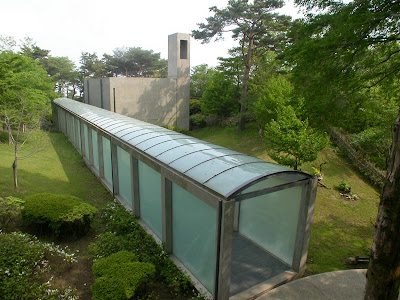 After passing through the lobby, we arrived to a garden, adorned with a small pond. The chapel is located in a lower level. 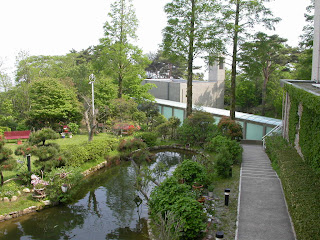 As in other of his churches, Ando avoids a direct and pompous access to the chapel. Instead, he uses a 40 meters long concrete arcade, covered by turquoise matte coated glass, upon which a steel and glass vault is located. This tunnel provides a processional access to the chapel, stressing the majesty of the wedding approach. 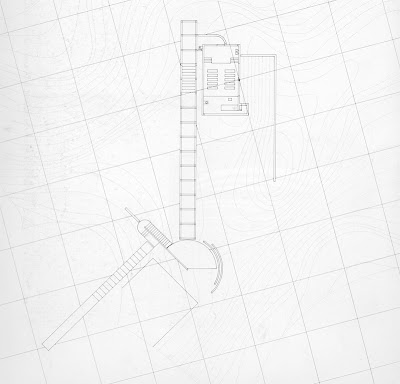 However, this tunnel view does not lead directly to the building or to a monumental access, since the chapel is located on one side of the circulation. The tunnel just frames nature, or in this case, the garden. 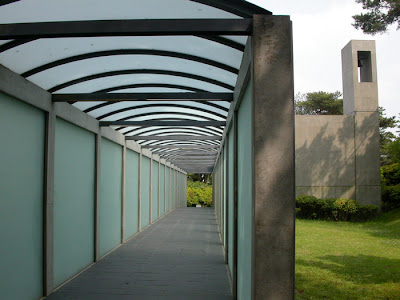 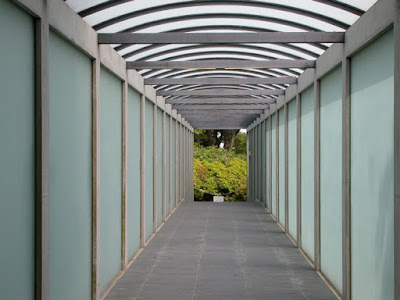 Next is a dark lobby defined by a curved wall that invites the visitor to enter the chapel by establishing a transition between darkness and light, the mundane space and sacral area. 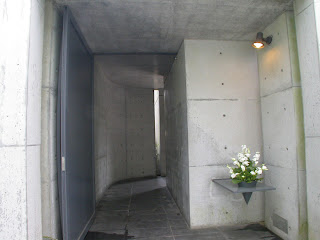 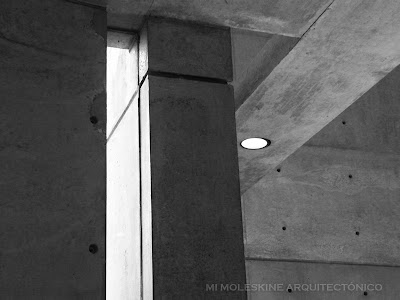 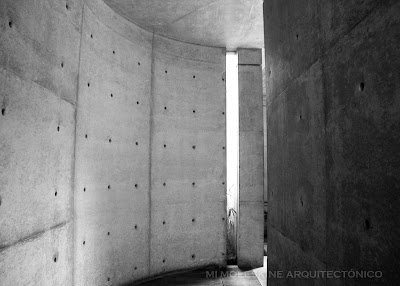 Subsequently, the space is expanded to generate the main chapel, a cube of 6.5 m per side in which one wall has been replaced by a large window, using the structure to represent the theme of the cross. 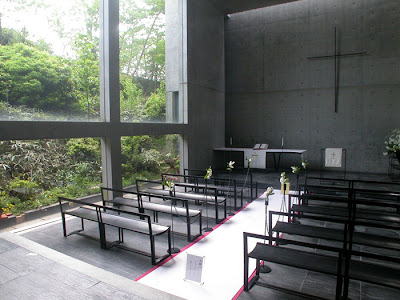 Thus Ando achieves the virtual contact with nature, through a framed landscape view and a lavish display of light. The effect is reinforced by the contrast of the colorful garden and the solemn monochromatic room. 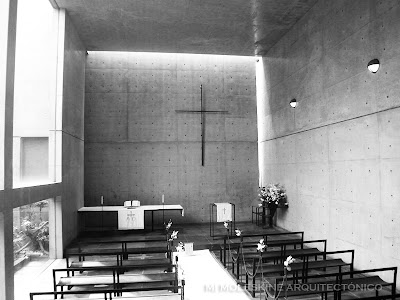 A different kind of light sharply illuminates the altar area through a thin, elongated slot located at the junction of the wall with the roof. This feature allows an ever-changing play of light on the rough concrete surface, whose appearance changes according to the time of day and the day of the year. 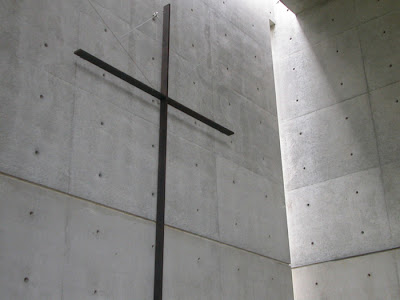 The same effect can be observed in the back of the church, where the architect uses sharp light to enhance the character of the walls as "free standing" compositional elements that virtually separate from the cube’s structure. 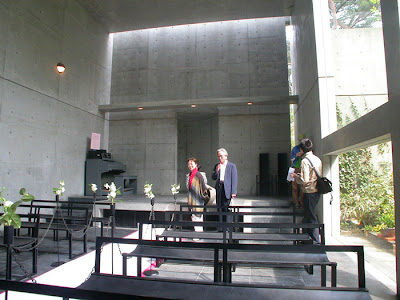 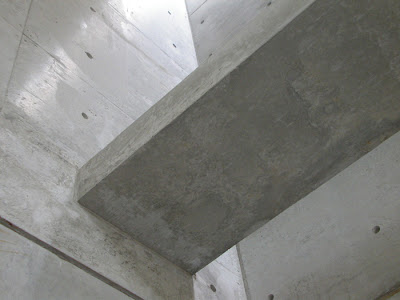 The furniture is also simple, as in other Ando churches, inviting the visitor to focus his attention in the main elements of the design, only this time he replaces wood by metal.. 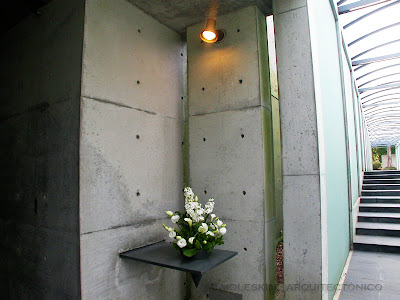 The vases in form of a inverted cone levitating on metal plates, the austere altar table and the long chairs back are some of the austere furnishings of the chapel (in contrast with the excessive interior decoration of the hotel) 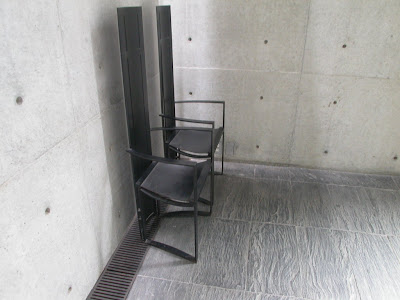 Several kilometers away is the famous residential complex Rokko Housing . 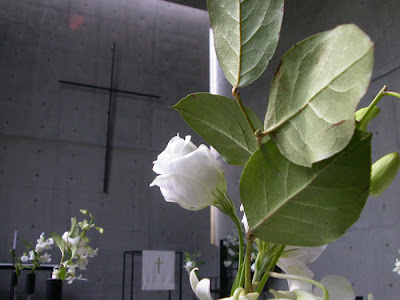 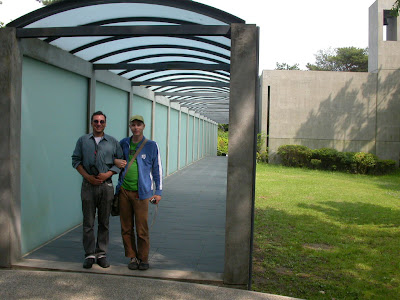 Neatly dressed for the wedding but... wait... oops! it seems someone forgot the bouquet...
Posted by Carlos Zeballos at 12:30 PM