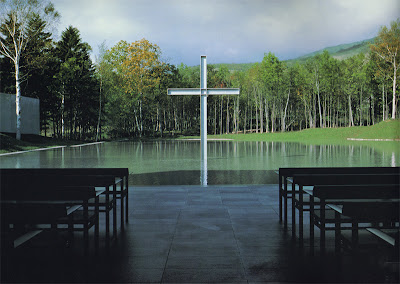 "I believe that a sacred space must be related in some way to nature, which has nothing to do with animism or pantheism."
Tadao Ando
Wrapped in an aesthetic devoid of any ornament, many of the works of Tadao Ando base their richness in the relationship of the building with light and nature. In that sense, the Church on the Water, designed in 1985 and built in 1988, is one of its most celebrated achievements, in which nature has been involved in the design of the building. Here, Ando manages to create a microcosm that combines simply but brilliantly concepts on the profane and the sacred, the artificial and the natural, the enclosed and the exposed, the emptiness and the infinity. 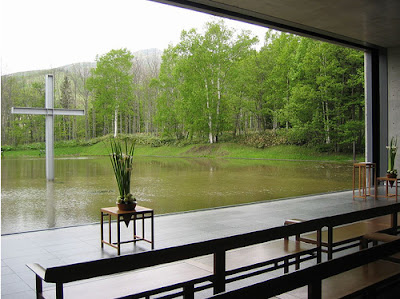 As a result of his self-leducation, Tadao Ando has usually taken Western architectural references, but without abandoning the roots of Japanese architectural tradition, particularly regarding the use of light, the geometric order and the ascetic aesthetic of Zen Buddhism
The idea of connecting places of worship with water, linking the sacred area with the landscape has a notable precedent in the Itsukushima shrine in Miyajima, near Hiroshima. In the shrine, a torii or gate is located in the middle of water. This place is considered one of the three most beautiful sceneries in Japan (according to the Japanese themselves). 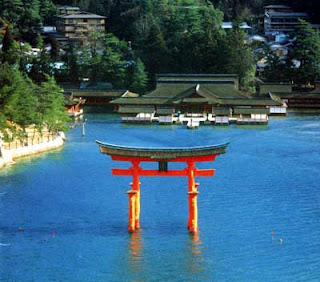 At the same time, Ando’s Church on the Water finds in the chapel of the University of Technology in Otaniemi, Finland, designed in 1957 by Kaija and Heikki Siren, its most immediate Western reference. 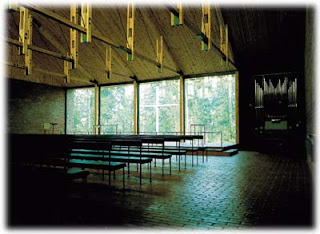 The church is located close to Tomamu in the heart of the island of Hokkaido, in northern Japan. It's actually a small chapel belonging to the Alpha Resort Hotel, specialized in arranging the perfect honeymoon for newlyweds. 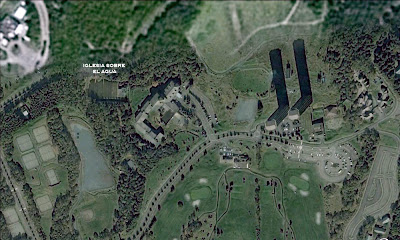 In Japan it is common for hotels to offer spaces for Christian, Shinto and Buddhist weddings, according to the customer's preference. The Alpha Resort is comprised of various facilities made in an style that tries to mimic the northern European architecture and organize their rooms in a kitsch, grotesque tower which stands horribly without any consideration to the environment or any kind of integration into the landscape (and that, therefore all architectural publications about the church have desperately tried to hide). 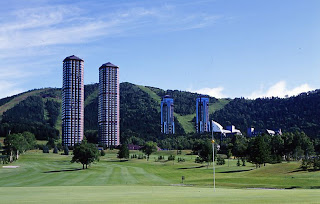 Ando, then, seems to start organizing his chapel by giving his back on these grotesque buildings, separating the church by a L-shaped wall, establishing a holy place isolated from the mundane and focusing all views toward a grove of beech trees on the front of the temple in which also a small stream runs. 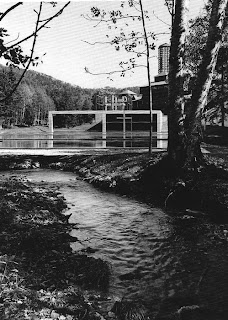 Church of the water stream. Photo courtesy of Shinkenchiku-sha
CONCEPT

Ando's architecture is based on a clear geometrical order. The composition of the church on the water is based on the intersection of two volumes (a prism with a square base of 15 m2 and a cube of 10 m per side) that share a corner in an area of 5 x 5 m. 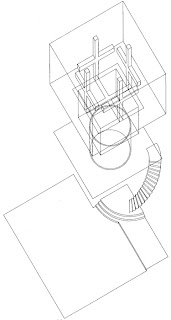 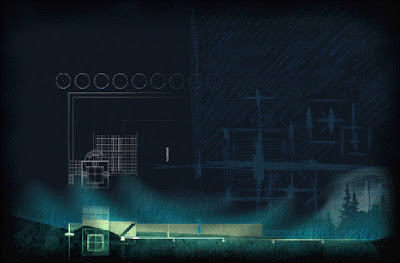 Diagrams courtesy of Tadao Ando Architect & Associates
The most notable feature in the church is that Ando has substituted the front wall of the temple, which generally displays images or icons of religious significance, with a more vivid and eloquent representation of the Creator: nature itself. This provides a live, colorful and ever changing setting, ranging from the intense red colors in autumn, the serene snow white tone in winter, the colorful spots in spring and the intense green hues in summer.

The chapel is separated from the hotel, as we previously said, by two arms 39.45 m and 75,425 m forming an L, located to the east and south respectively, allowing the user to discover the church while going around it and entering it through the north end. 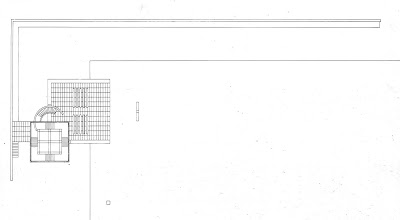 The pond in front of the church is a rectangle of 45 x 90 m, divided into four 15-meter platforms, that provides a virtual compound which connects the church with nature, a clearly visible water square but with which the user can not establish physical contact. At the same time the space of the chapel seems to extend outward, maintaining a visual and symbolic link with the metal cross located in the middle of the pond. Placing the cross outside the church actually increases its visual impact. 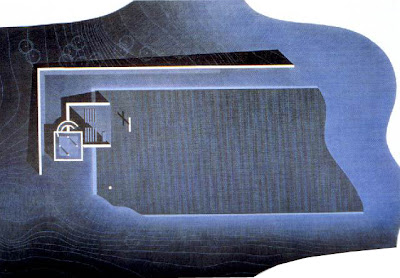 After going around the L wall, the visitor ascends and descends a few steps around a space defined by four crosses, which define a virtual cube representing a sacred space that spreads toward the cardinal points. The interior of the cross is a little square with glass ceiling, which seats are arranged around its perimeter. 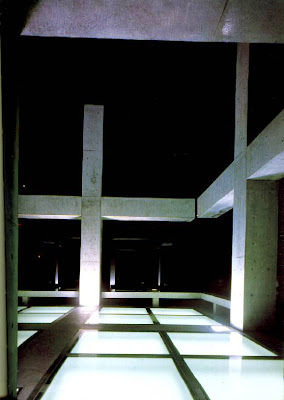 Photo courtesy of Philip Jodidio
The 50 cm thick crosses are arranged so that their end vertices are separated by only 5 inches, increasing the drama of the composition. 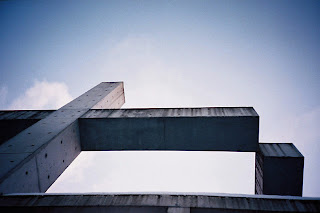 Making reference to the original form that originated them, the crosses are enveloped by a transparent cube, a metallic frame covered with laminated glass. 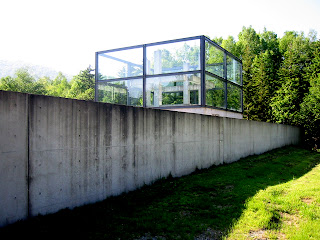 Tadao Ando, summarizes experience of approaching from the cube of light to the chapel: "The approach to the chapel is carried out by following the path of the free wall and ascending a gentle slope to reach the access area, defined in its four sides by a white frosted glass. In this enclosure of light, in which four contiguous crosses rise, the intensive and direct sunlight and the light filtered through the frosted glass are mixed, wrapping visitors in a subtle contrast that gives solemnity to the place. 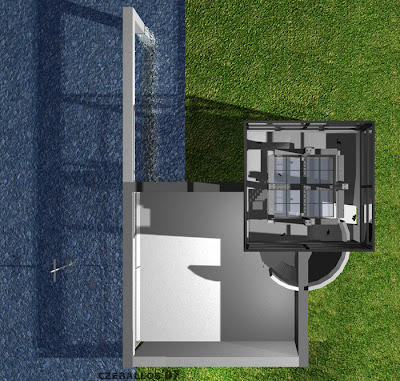 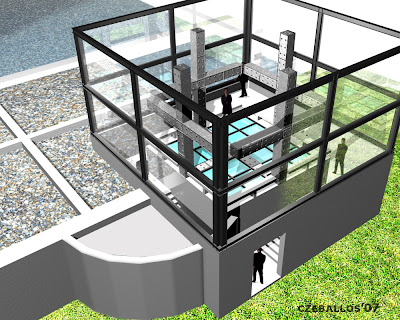 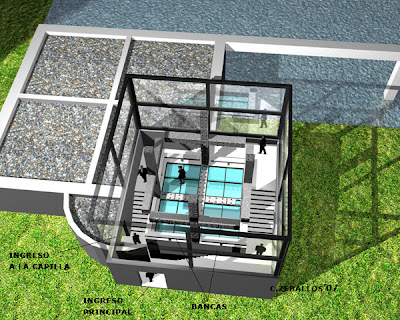 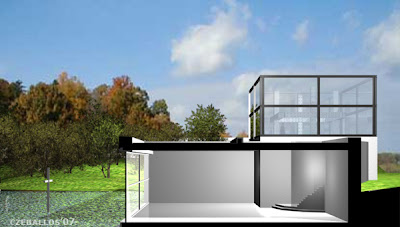 In this section, the curved wall is made of concrete, but I made it transparent in order to see the detail of the staircase. 3D images by Carlos Zeballos.

A stairway starts from this enclosure, dark and curved, which leads to the sudden vision of a fifth cross and the dark blue lake. The horizon separates the sky from earth, the sacred and the profane. The landscape changes gradually appearing as a transition in which visitors can feel the presence of nature and the sacred. Sunlight, the lake and the sky will continue to sing different tunes. " 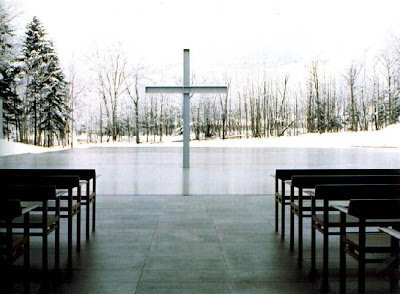 Photo courtesy of Philip Jodidio
Next to the chapel lies a concrete porch of 6.2 m high, holding a beam that extends a span of 9.15 m. This gate symbolically reinforces the idea of a transition from the profane to the sacred, while functionally hosts the sliding glass door that is limiting between the chapel and pond. Thus, when the weather permits, it is possible to open the screen, maximizing the intimate contact of the chapel with its environment. To avoid interrupting the continuity of the water surface, the rail of the screen is slightly submerged, being imperceptible from a distance. This detail seemed very special and original, until I visited Luis Barragán's home studio in Mexico, and discovered where Ando took his inspiration to design that screen. 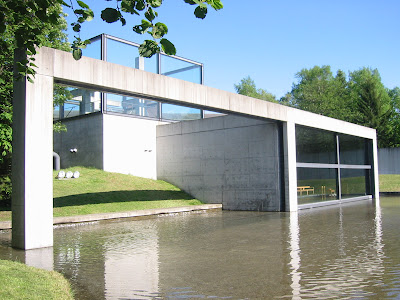 In one corner of the chapel adjoining the semicircular staircase and discreetly hidden under the light cube are three waiting rooms and toilets, arranged around a cylindrical glass space that receives top lighting through four glass surfaces (those that form the floor of the plaza of the crosses). 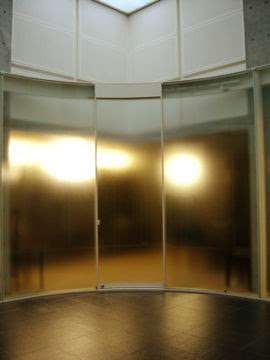 The chapel is separated from the waiting area by a semicircular step that helps define the cylinder entry. From there the visitor is lead to the waiting room (that is the cylinder shown the picture) and is inscribed below the square of the 4 crosses. Beneath this floor are located the boilers for heating. Let’s not forget that the church is located in Hokkaido, where winters can reach temperatures as low as -30 °C. 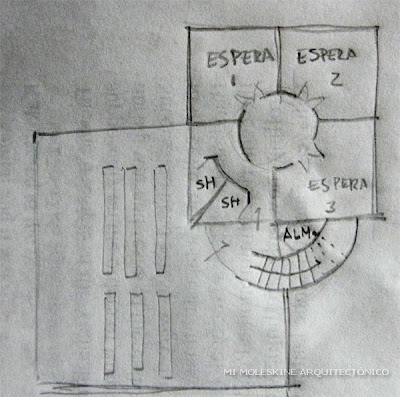 Basic sketch of the first floor of the chapel. Had I known then that my moleskine would become a blog, I would have made the sketches more carefully... sorry!

The interior of the chapel is sober. Five rows of wooden benches arranged in pairs on each side of the room, a very simple design, are accompanied by two chairs designed by Ando, reminiscent of Charles Renie Mackintosh furniture and inverted cone-shaped vases arranged on wooden frames. 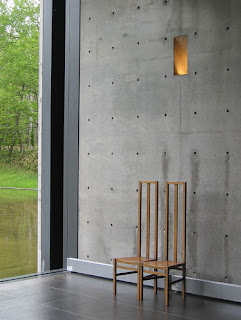 The walls of the chapel housed fenestrations that provide a light source while establishing a pattern next to the exposed concrete grid, a typical signature of the buildings of Ando. The floor is covered with black granite slabs. 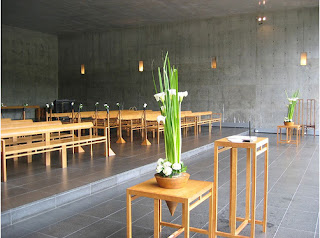 The region of Hokkaido is famous for its cold climate, because of the winds that come down from Siberia. To this end, an external 5 cm and an internal 60 cm thermal coating were added to the 25 cm concrete walls, achieving a thickness of 90 cm. The walls were cast in-situ and a special technique gives the concrete a unique external smoothness, as if covered with glass, allowing the light to be reflected and changed during every hour of the day.

The pool of water, towards which the gently hills of grass descend, is divided into 15 m platforms that are staggered along the slope and disappear into a collector at the end of the pond. This detail adds the sound of small waterfalls to the visual qualities of the pond. 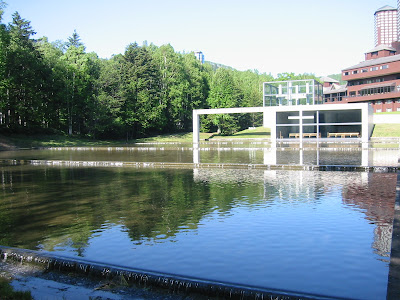 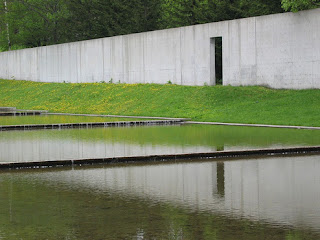 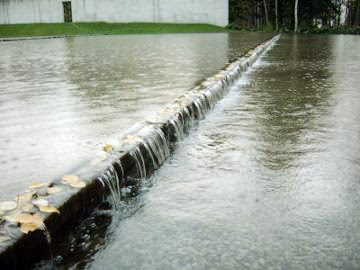 "I want to give the power of nature a presence in contemporary society and thus provide the kind of exciting places that speak directly to every sensation on the human being as a living, bodily organism. Indeed, to recover from the layers of history not the form nor the style, but the essential vision of nature and life that flows from its root. The spirit of culture, in other words. " 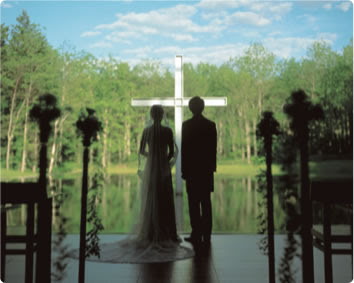 Posted by Carlos Zeballos at 7:00 PM