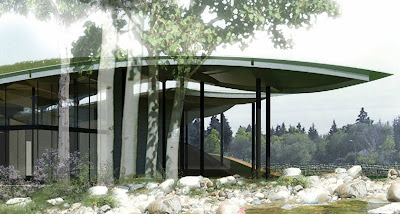 "We are hoping that the public see that the most beautiful architecture is one that is in complete harmony with nature." 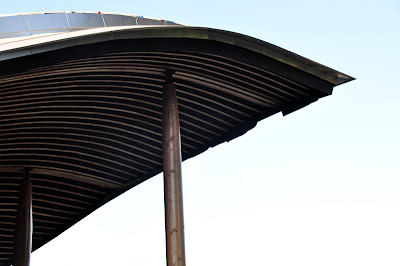 The VanDusen Botanical Garden's Visitor Center is a building that stands out for its dynamic and suggestive architectural form as well as for achieving a close communion with nature, using sophisticated technology for both purposes. The gentle undulating shape of the building seeks to integrate itself with the context of the Botanical Garden that houses it, elegantly designed in wood and glass.

The project is the work of the renowned Canadian Office Will Perkins + Canada, in collaboration with the famous landscape architect Cornelia Hahn Oberlander . She and Peter Busby, senior partner of Perkins + Will, have a long history designing sustainable projects.

A few weeks before its inauguration, we had the privilege of accessing to this unique building. We will be sharing some aspects of its construction in this post.


The building is located at the southeast end of the VanDusen Botanical Garden, near the entrance area and across the Livingstone pond.

To access the Center, the visitor crosses a wooden bridge that uses the same technology as the beams of the ceilings. The bridge leads to a large entrance plaza. 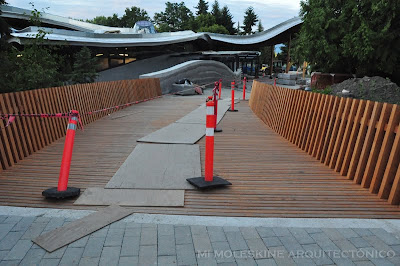 
The first thing that catches the attention of the building is the absence of straight lines in its composition. According to Cornelia Hahn Oberlander, the design took its inspiration from the petals of an orchid native to British Columbia, whom she found in the book "The Alphabet of Plants" by Karl Blossfelt.

The building is organized around a central space and a number of "petals" are arranged from it, housing the various functions of the visitor center. 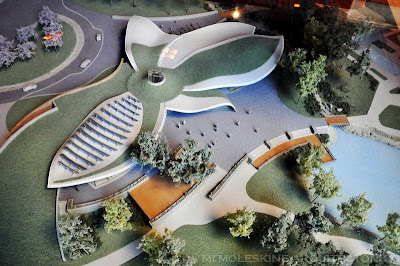 Outside, the idea is that the building's profile will flow organically and in harmony with the rest of the garden, in an abstract composition simulating the rugged relief of the mountains of Vancouver. However, the composition is very light as the use of overhangs and large glass panels suggests the image of floating roofs . 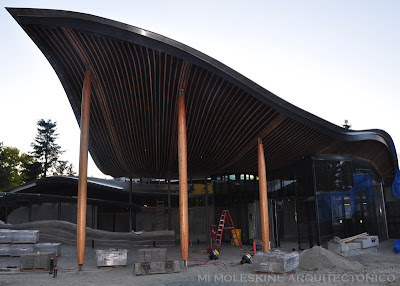 A glass cone stands as a vertical counterpoint to the predominantly horizontal composition of the building. 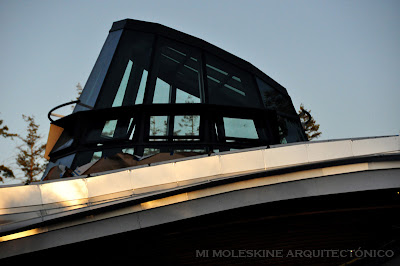 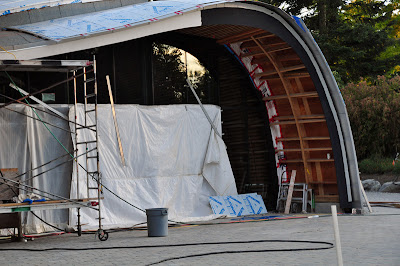 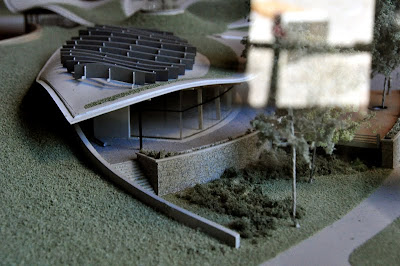 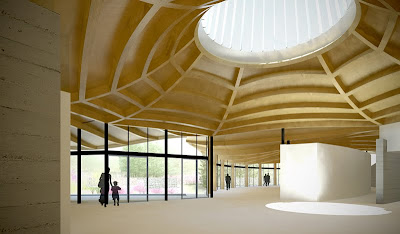 Inside, the oblong building is organized through a central courtyard around which the functions are distributed in two areas, traversed by a central street that links them across. 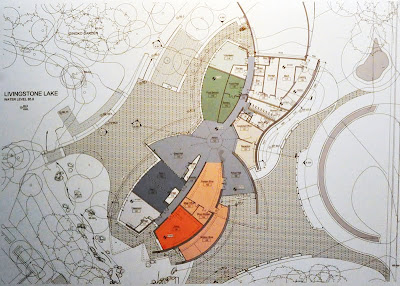 These two areas are specialized in an service area to the east (a cafe, food preparation and storage) and an academic area to the west (library, classrooms, display areas and a shop). 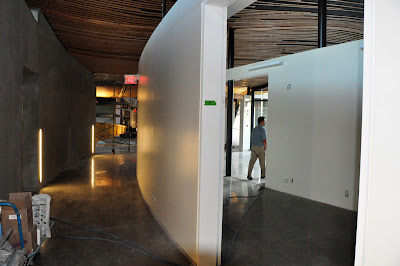 View of the central circulation 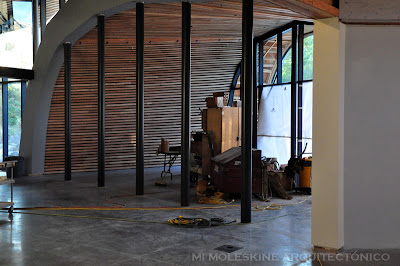 In the center stands, dominated by a glass cone, a 15 meters high central atrium, that greets visitors with a generous entrance hall, along with the reception and curator's office. 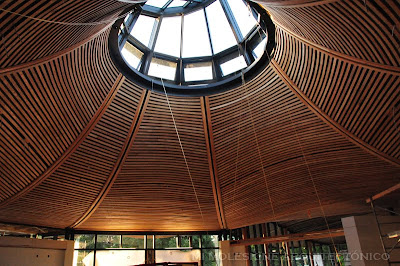 In addition, the building is linked to large areas of expansion that spread like a succession of plazas that provide access to the garden. 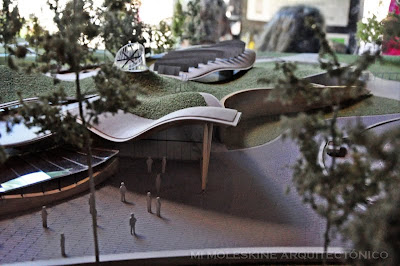 Detail of the entrance plaza.

In addition to its aesthetics, the building takes the lead in green design, using a variety of techniques to minimize its environmental impact. The centre has been designed to achieve the standard Living Building Challenge 2.0 , Cascadia Green Building Council and LEED Platinum. To this end, the proposal faces three main issues: energy management, type and origin of materials .


VanDusen Center proposes technology of minimal use to reduce or eliminate energy consumption. This will be achieved through renewable resources by using solar panels and water pipes. Then the energy is stored underground and then re-used for heating and electricity consumption, for example.
The design also promotes environmentally friendly use of energy, by providing natural ventilation during the summer as well as capturing plenty of natural light and reducing energy consumption for artificial lighting. In addition, an efficient system will provide heating and cooling for the building using only one quarter of the energy consumed in traditional heating systems. 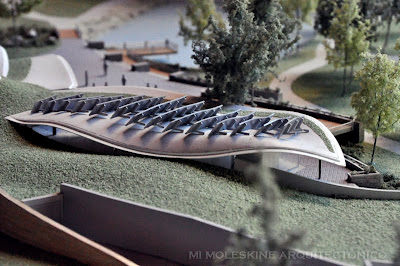 
All water for consumption of the building will be self-sufficient, ie not use the City Water Service. The water will be collected from rain and subsequently recycled (I should note that Vancouver is a very rainy).
The "gray water" (used in toilets) will be treated on site using filtration equipment and reused in the same building. The "black water" (the toilets, kitchens, etc..) will be treated and discharged on garden ponds.

Appropriate species planted on the green roof will help reduce the ambient temperatures in summer and will provide a cool roof instead of a "heat island" associated with most asphalt roofs. The green roof is an extension of the garden landscape and serve as a habitat for flora and fauna. 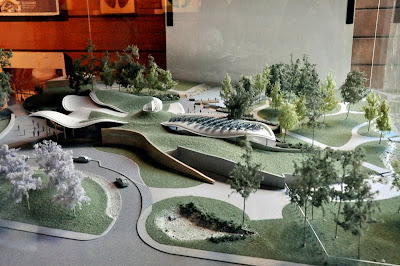 Visitors can see and learn about the techniques that were used to built this roof.


The complicated geometry of the wooden curved roof represented a major constructive challenge. Since none of the pieces on the petal components were equal, the design was carried out with the aid of computer programs, particularly Rhinoceros, a software specialized in industrial design through the use of NURBS, and Grasshopper, a plug-in for Rhinoceros which adds parametric capabilities.

There was a continuous dialogue between designers and modelers, so that the ideas in the paper could get built. One change involved the variation in the orientation of the wood, allowing considerable savings in the roof's budget and the execution time. 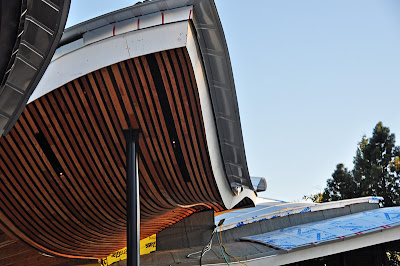 Subsequent to modeling, the pieces were pre-fabricated in a separate workshop, using beams made up of sheets of wood glued to each other, worked on quasi-rectangular sections to be assembled forming a curve, and then stitched together with a crane on site. The process is similar to the roof of the Richmond Olympic Oval, which is also discussed in this moleskine. 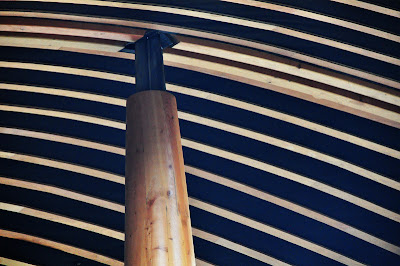 One of the most striking aspects is the use of "earth concrete" walls , which have less impact than the traditional concrete walls. Basically they are made of compacted earth containing steel reinforcements inside. 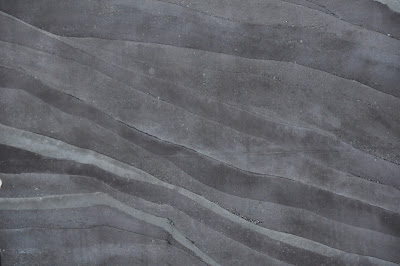 The ceilings contain a number of insulating layers that prevent water or the roots to affect the wooden structure.

The firm Sharp & Diamond carried ou the landscape design, blending with a delicate balance the contemporary style of the center with the existing surroundings. The terraces and the pond located in front of the Center establish a liminal transition between the new and the existing landscapes. 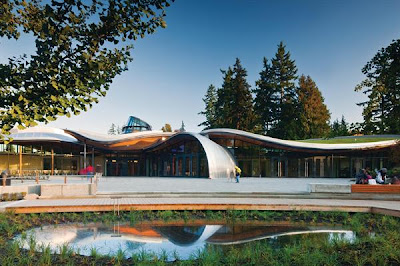 The following video shows more details of the construction few weeks before the building-s completion .

***
It is my guess and hope that this small center will become an international benchmark for environmental standards and the effort to reduce buildings' impact on the environment, producing more energy than it is consumed. In fact, this is Canada's first "living building", so many people expect that this will be an important step towards Vancouver's dream of becoming the "greenest city" by 2020. 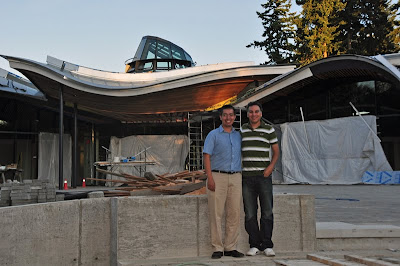 With Santiago Diaz, a Peruvian architect who was in charge of some of the 3D modeling and who kindly guided me throughout the Centre. Without his help, this post wouldn't have been possible.
Posted by Carlos Zeballos at 4:38 PM