LUIS BARRAGAN: CHAPEL OF THE CAPUCHINAS 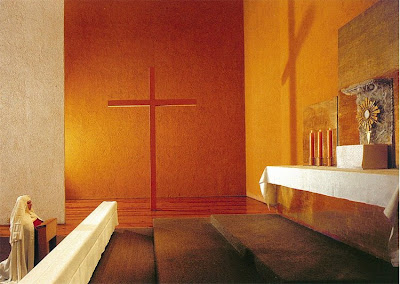 "...the words beauty, inspiration, enchantment, magic, sorcery, charm and also serenity, silence, intimacy and amazement have disappeared at an alarming rate in publications devoted to architecture. All of them have found a loving welcome in my soul, and even if I am far from claiming to have made them complete justice in my work, they have never ceased to be my beacon. "

Luis Barragan, acceptance speech for the Pritzker Prize
My kind hosts, the Perez family, drove through the treed, pretty cobbled streets which, away from noise of the Mexican metropolis, form the Colonia Tlalpan.
"We're going to a chapel which is a UNESCO World Heritage Site and where I made my First Communion," says the eldest child. Intrigued, I figured we'd go to one of the magnificent colonial churches that form the outstanding Mexican cultural heritage. I was very surprised when we stopped at a gate set in a modest wall that constituted a very simple and anonymous facade. 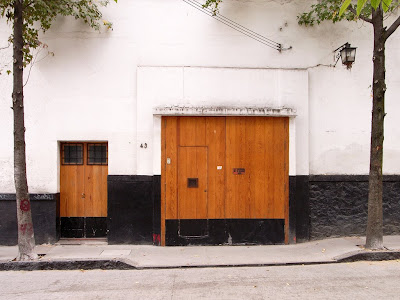 Behind this austere facade an architectural gem hidden inside. Photo courtesy of peaks.
To my surprise, after the wall I discovered the famous Chapel and Convent of the Capuchinas Sacramentarias, a masterpiece by the most renowned Mexican architect Luis Barragán . Barragán along with Oscar Niemeyer, is the only architect to have won the prestigious Pritzker Architecture Prize in Latin America. In fact, when Jay A. Pritzker awarded the architect, he considered that Barragán had dedicated himself to architecture "as a sublime act of poetic imagination." 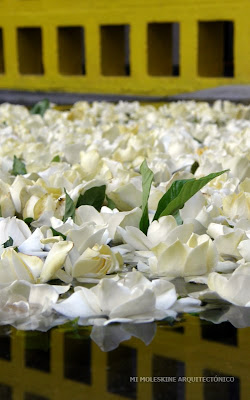 Details of the pool and the reflection of the lattice. Photo C. Zeballos
Deeply religious, the master filled his works with peacefulness and serenity, using a clearly Mexican formal vocabulary, the expressive tectonic nature of the materials, the sublime use of light and an elaborated yet simple treatment of space.
However, the production of Barragán is not very prolific, mainly because for a good period of his life the architect was very selective in accepting his commissions. However in 1953, he gladly accepted the project for the expansion of the cloister and the chapel of the Capuchin sisters. 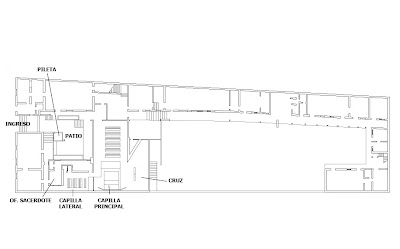 Layout of the complex, courtesy of Pete Lackey
To carry out the work, which lasted 7 years to complete, the architect dedicated much enthusiasm and passion to define the many details that compose the building.

"We did not know what he was doing, but we trusted him completely, until one spring morning in April 24, 1960 the chapel was opened. To us, it looked amazing, beautiful, austere, almost without images, ahead of the Second Vatican Council " recalls the sister. 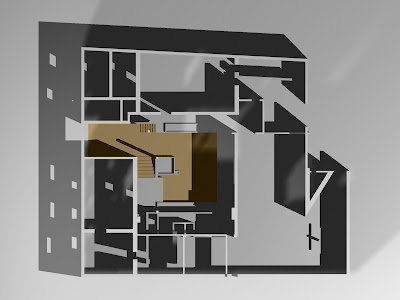 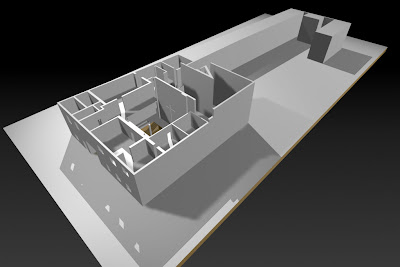 3D plant and the chapel, courtesy of Pete Lackey
Upon entering, we get to a small semi sunken courtyard, with white walls, in one of which a monumental cross is embedded. 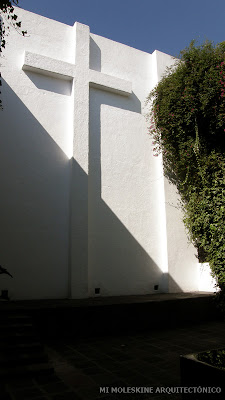 As a counterpart, a serene pool, in whose waters white flowers float, gives human scale to the space. To the right, a yellow frame lattice accompanies a stairway leading to a secondary chapel that we will mention later. The simple but powerful detail and color of the yellow grid reflecting on the black-stone pond is simply overwhelming. 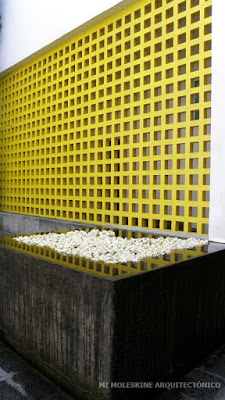 At the other end of the pool is the entrance to the chapel, which we accessed after a short climb up stone steps. A long single wooden bench seems to float perpendicularly to the wall, but is actually held by invisible metal brackets. 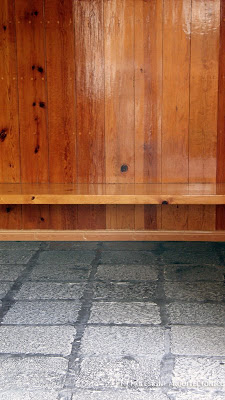 Details of the "floating" bench adjacent to the wooden wall. Note the austere character of the floor.


Once in the room, the nun opened the doors (one of which, curiously, revolves around 30 cm from its end) to let us note one detail: the use of a pink glass, rare at the time, that illuminates the environment with a special tone of light. On one side are the private areas of the convent, arranged on a long plot. Towards the other side, we entered the chapel. 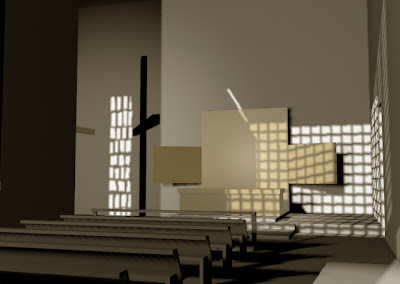 3D representation of the interior lighting of the chapel, which illustrates the interplay of light and shade but does not reproduce the colors of the windows, walls and wood. Image courtesy of Pete Lackey

The light passing through a yellow glass located on the extreme of the choir floods the space turning it of a caramel-color and reveals an austere chapel with hardwood floors and with rough textured walls of vivid ocher tones. The altar is a sculptural work, the golden rectangles by Mathias Goeritz. 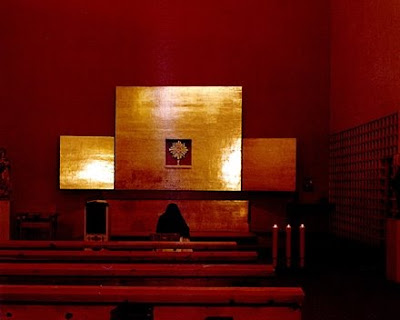 I am filled with deep sense of spirituality that conveys in this simple but warm space. Just the color of the wall causes the light to produce shades that suggest feelings of peacefulness and serenity. 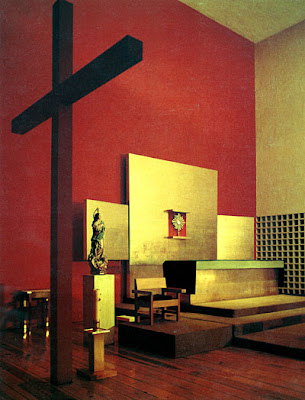 To the side, a freestanding cross receives lateral illumination. The effect is dramatic, due to a triangular wedge that is embedded in space (see the plant layout). 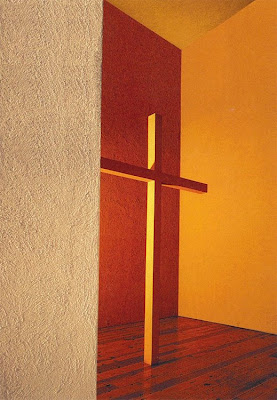 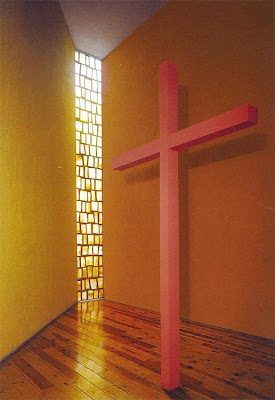 Effect of lateral illumination of the cross. Pink hue changes according to time of day. Photos courtesy of the Barragan Foundation


"Tadao Ando was here" he says the sister proudly "and he was amazed by this effect of the light." Tadao Ando, Frank Gehry and Rem Koolhaas among other famous architects have been fascinated and influenced by the mastery of Barragán’s works.

To the right, separated by a white wooden lattice-shaped grid, is a side chapel that is often used by families of the nuns. 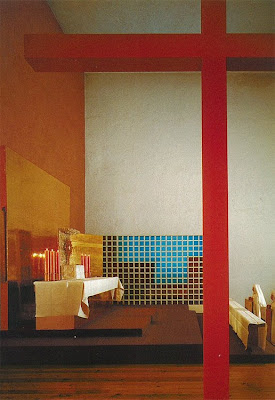 View of the side chapel. Photo courtesy of the Barragan Foundation

From above, a hidden slit bathes the ambient with generous, warm light, while discovering the enormous height of the walls, a triple height that gives monumentality to the chapel. 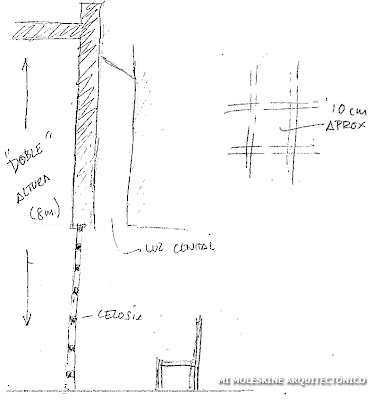 Quick Sketch showing the detail of the light slit on the side chapel.

Exquisite details featured in the small corridor adjacent to the chapel, such as a window whose yellow light is drawn on the wooden wall (the picture shown is taken from outside the window), the confessionary, furniture and doors, demonstrate the thoroughness that the Mexican master put in this work. 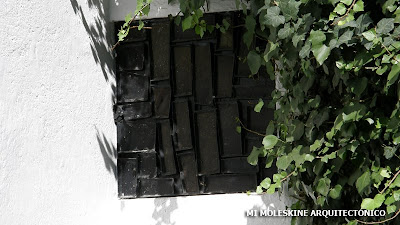 Detail of a wall, whose layout has been intentionally distorted. The illumination inside produces on a dramatic character.
The tour ends back in the small courtyard, in the hallway next to the pool, separated by the yellow lattice and with the bench that seems to be levitating. 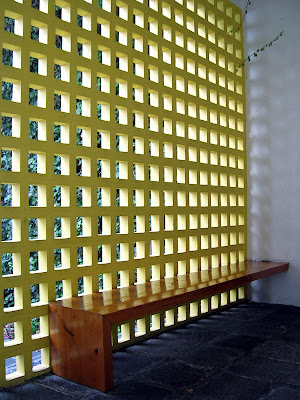 Religion and Myth
How to understand art and the glory of history without religious spirituality and without the mythical background that leads to the very roots of the artistic phenomenon? Without any of those we would not have the Egyptian and our own Mexican pyramids, there would be no Gothic cathedrals or Greek temples or the amazement that the Renaissance and the Baroque left, not the ritual dances of the so-called primitive peoples and the inexhaustible treasure of popular artistic sensitivity of all nations on earth. 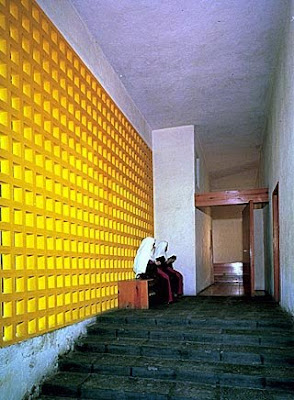 I would like thank the fine courtesy of architect Francisco Perez, his wife Carla and their children Erika, Diego and Ximena, without whose generous help my visit through Mexico and its architectural gems, and in particular building, would probably not have been more than an unaccomplished dream. 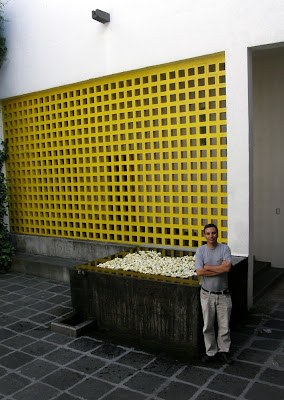 Posted by Carlos Zeballos at 11:44 AM