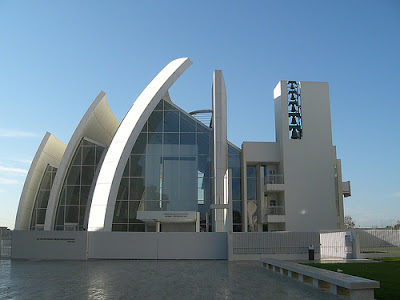 
"Light is used as a metaphor of the Good, in all its perfection in the significance attributed by philosophers, poets, painters, musicians, politicians and popes. In architecture as in any other creative expression, light has always been a source of ecstasy and of inspiration..."

Richard Meier.
As part of the "50 Churches for Rome 2000 Program", during the celebration of the Jubilee 2000, the Catholic Church culminated in the October 25, 2003, the Jubilee Church, also known as church of the Dives in Misericordia (Dio Padre Misericordioso), in Tor Tre Teste, a suburb east of the Italian capital. 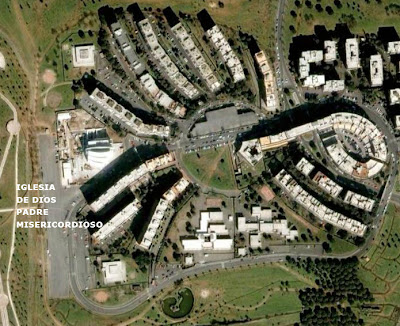 Jubilee Church in Tor Tre Teste.
See location on Google Maps
Previously, the Church had called for a competition invinting internationally renowned architects such as Tadao Ando, Frank Gehry, Peter Eisenman, Santiago Calatrava, Gunter Behnisch and Richard Meier, the winner (interestingly, no Italian architect was among the invited professionals. In addition, only Spanish Calatrava professes the Catholic faith, so Meier became the first Jewish architect to have designed a Catholic church in Rome).
Richard Meier is an American architect, Pritzker Prize winner in 1984, and also honored with 29 National AIA (American Institute of Architecture) Awards and 53 Regional AIA Awards. His work is characterized by a rational use of geometry, the clarity of its spaces, the superb handling of light and the use of white as a symbol of purity because it is a color that contains all others. 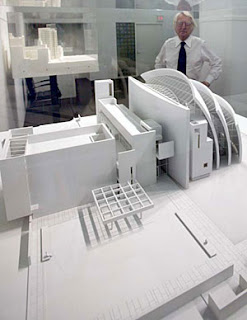 
Meier's proposal for this competition was noted for its distinctive shape and elegant use of materials related to innovative construction technologies, the presence of light as an element that determines the character of the work and the strong connotation of the building as a place for people, "not only as a Christian place, but for the entire world community." However, Meier’s project includes clear references to Christianity and to Catholic faith in particular. 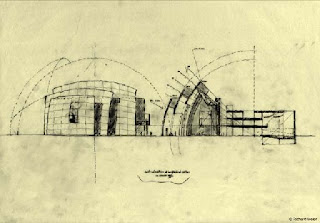 Preliminary sketches of the church. Image courtesy of Richard Meier & Partners.
The complex formally differenciates itself from the surrounding buildings, becoming a white landmark in front of square, an area that receives the congregation. The project consists of two elements: the church itself and the parish center, consisting of offices, an auditorium and a multipurpose room. Both buildings are separated by a concave wall and linked by a glass screen on the facade of the building. 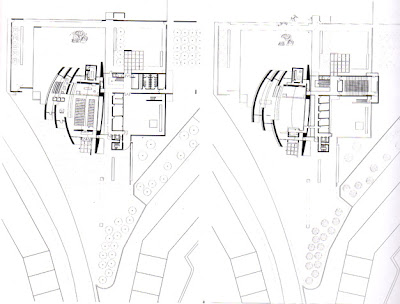 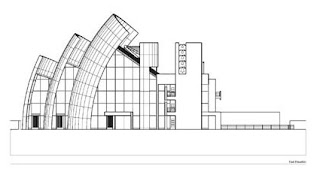 Plants, main facade and section of the church. Images courtesy of Richard Meier & Partners Architects.
The church has three curved walls resembling of a ship's sails, as it symbolizes "the ship in which the people of God sails." Three circles of equal radius are layered, and together with the opposite wall are the body of the ship. "These three walls discreetly refer to the Trinity," says Meier. The church has large glass surfaces that guarantee a generous flow of natural light, located both at the top and at the main and back facades. 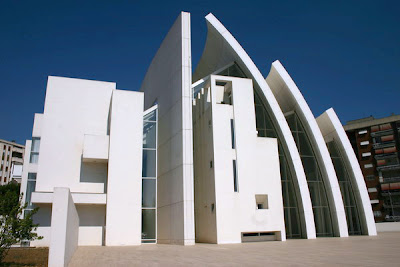 Photo courtesy Axes02
The architectural concept is unique and innovative in traditional Meier's vocabulary, but raised an engineering and constructive challenge. Meier’s technical team’s proposal was to create a metal structure covered with concrete blocks and then cover it with plaster, but that would have given the building a maximum life of 50 years. Therefore, following a Antonio Michetti’s suggestion (the Vicariate’s technical consultant), the chosen alternative was the assembly of precast concrete blocks of dual curvature, fit together by means of a specially worked out joint and held by a post-tensioned reinforcing, consisting of horizontal and vertical cables and of vertical rebars. The outer sail is composed of 78 segments, the intermediate of 104 and the inner, which reaches 26 meters, of 176 segments. In order to preserve the whiteness of the building, the company Italcementi developed a new cement containing titanium dioxide, called TX Millennium, which ensures the whiteness of the concrete, despite the pollution, rain and weather effects. 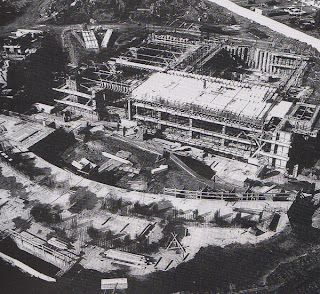 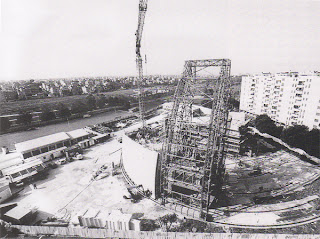 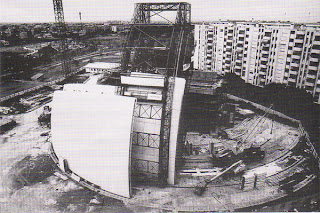 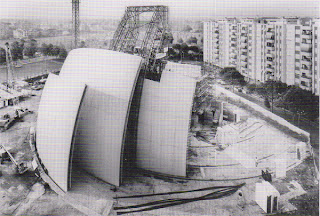 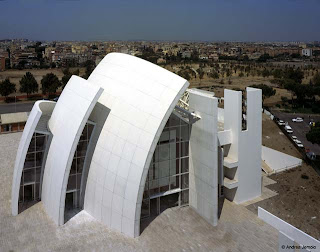 On the main facade, there is a belfry with five bells, corresponding to the five continents. 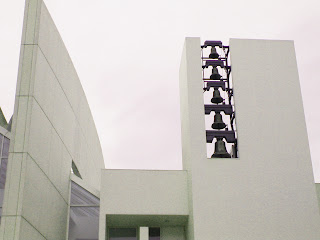 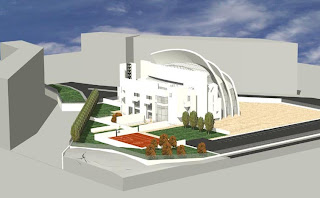 Back view of the complex, the parish center, parking lot and basketball court. 3D Image courtesy of Alessandro Cecchelli 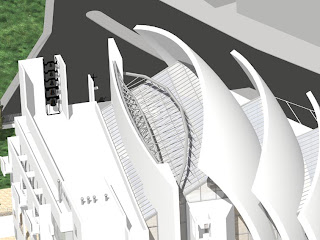 Top view showing the glass skylights. 3D Image courtesy of Alessandro Cecchelli
The interior of the church is impressively lighted, giving different types of light from the glazing surfaces above and the facade of the building, as well of the light that plays with the convex surfaces of the sails. A prism located in the altar area uses beveled windows to achieve indirect lighting, recalling the effect of the church of Notre Dame du Haut, Le Corbusier , of which Meier is a declared admirer. 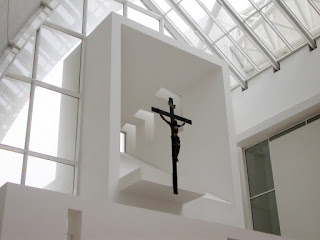 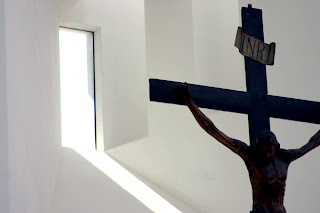 In the opposite extreme, near the entrance, lies the pipe organ, mounted on another prism which surfaces and edges are broken by the architect to create a transparent virtual target volume, which seemed to float on the marble wall. 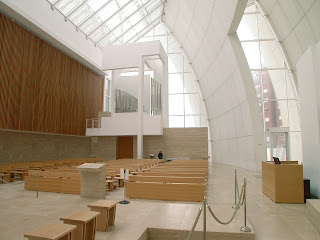 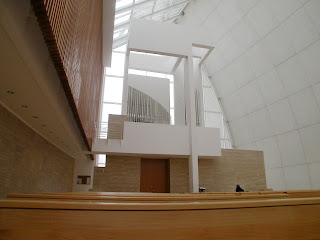 Interior detail showing the pipe organ. Photo C. Zeballos
The wall opposite the sails is covered with wooden slats, which provides warmth to the space. 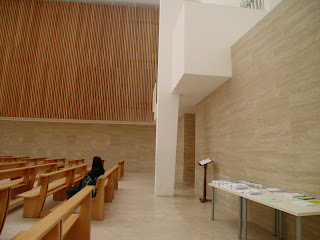 The furniture, according to the minimalistic aesthetics of the church, has a very pure and simple style. The altar, made of travertine marble, again resembles the shape of a boat. 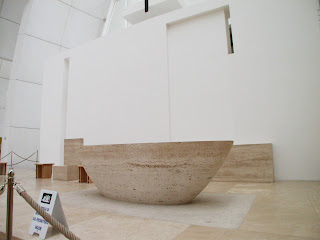 This building not only is a beautiful monument added to the rich religious heritage in Rome, but also became a landmark that revitalized the Tor Tre Teste neighborhood, attracting more than 35,000 visitors a year. 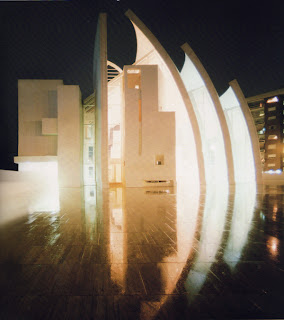 Click here to see a beautiful 3D animation for the Jubilee Church, by Roberto de Angelis

"Transparency and light cascade down from the skylit roof, literally invading the interior of the church also penetrating from below through a narrow slot opened at floor level. People in the atrium are enveloped with mystical light." 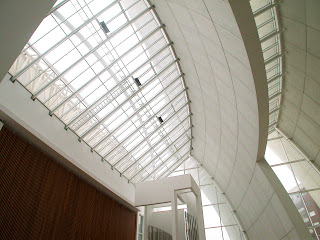 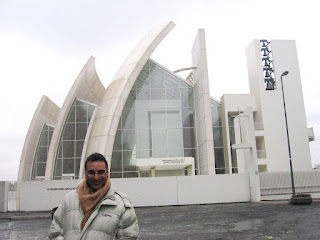 The most striking aspect of the church is the contrast of white forms with blue sky and the superb concept of natural light... What a bad luck to arrive here on a rainy day!

Posted by Carlos Zeballos at 12:40 PM