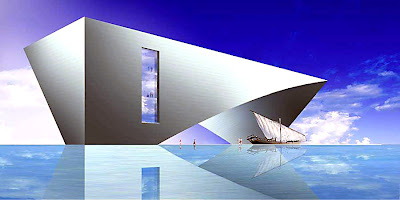 "In order to emphasize the simple, but powerful, shape of the building, the  surrounding landscape is organized in grid form. Rows of trees line the forecourt of the site, creating an oasis-like border that allows visitors to transition gradually between the dynamic city and the more serene and contemplative space of the museum "
Tadao Ando

For those who remember Tadao Ando from his Church of Light, Rokko Housing I and II and the Church on the water , (all of them sober projects, composed in clean geometry and consistent functional organization, embodied in a minimalist language cast in concrete), his proposal for the Maritime Museum on Saadiyat, Abu Dhabi, may appear shocking. Actually the award winning Japanese architect has been experimenting with new materials and sculptural forms for some time already, as it is evident in his hhstyle.com / CASA . 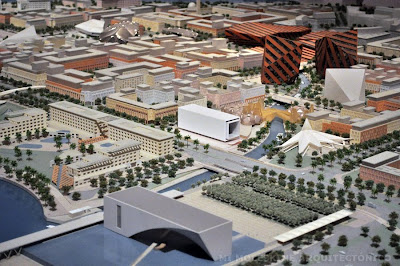 I guess that designing a museum next to buildings by Zaha Hadid and Frank Gehry, put pressure upon Ando to propose something monumental, unique and sculptural. But how to do it without giving up its own zen -style architectural  language, precisely the kind of aesthetic that led him to fame? 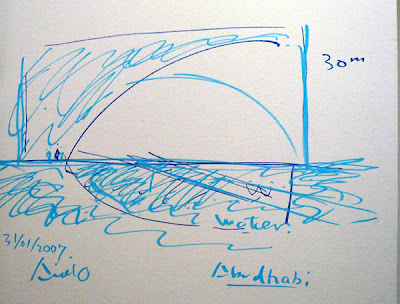 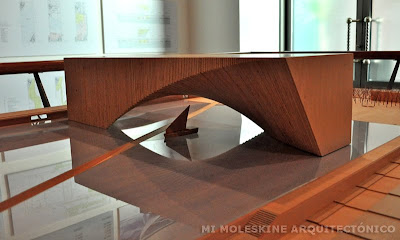 The proposal at an urban level is spectacular, sculptural, and evokes Niemeyer's: the building becomes an arch, a symbolic link between the sea and the land, while sitting on a rectangular platform it receives the elongated predominant direction of the urban layout, which is in itself another link between the city and the sea.

The volume is a box 108 m long, 36 m wide and 27 m high, cut diagonally by a hyperbolic paraboloid curve. The museum would host exhibition spaces in an area of 33300m ². 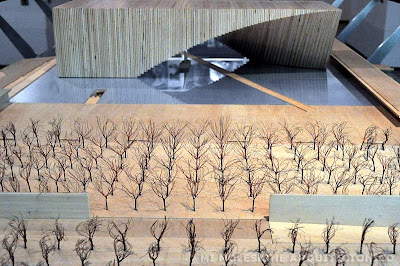 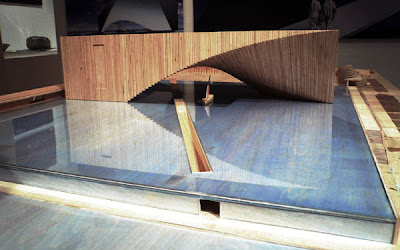 Thus, a forest of trees arranged on a dry square represents land, while a large pond evokes the sea. The "oasis" of trees provides a transition between the city and the museum, which visually links the two spaces,while a covered lateral circulation links them functionally. Ando has previously worked similar spaces in urban waterfront projects such as the Hyogo Prefectural Museum in Kobe and the Suntory Museum in Osaka , among others. 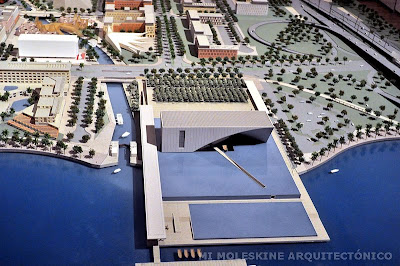 The volume is blind, massive, with only a large vertical window facing the sea. Thus the approach from the city faces a large arch framing a dhow, a very traditional sailing vessel of the Arab Emirates, floating on the water. 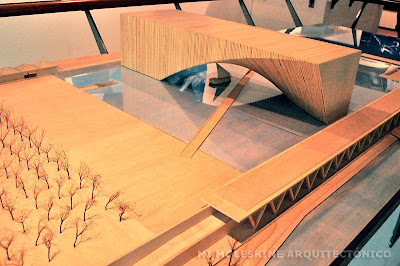 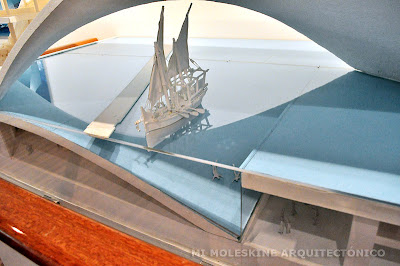 Access to the museum is reached by a ramp that crosses the volume diagonally, allowing views of the boat, and subsequently goes under water, in a gesture similar to what the architect had in his famous  Temple of Water in Awaji Island . 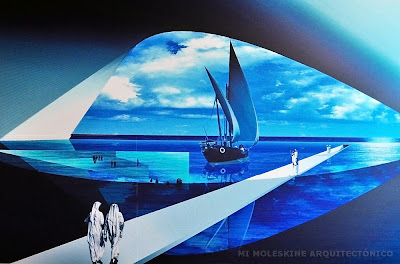 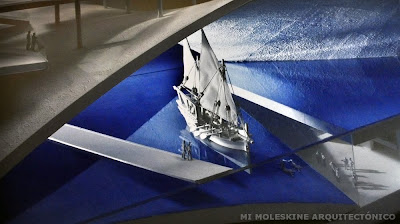 "Dhows, Arab sailing vessels with triangular or lateen sails, float over the voids of the interior space and help create an intense visual experience by relating objects to one another and to the museum architecture as a whole. Below ground, there is a second space – a reception hall with an enormous aquarium. A traditional dhow floats over the aquarium and is seen from different perspectives " 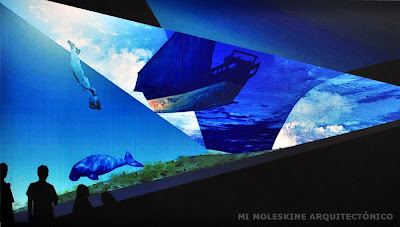 Even though the building is formally very impressive, the problem begins when we start to examine in more detail the internal space. Obviously this sculptural form leads to serious functional  problems , and a large percentage of the area of ​​the building is simply unusable, or "empty". 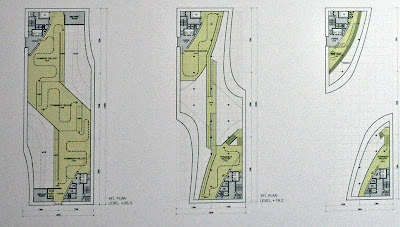 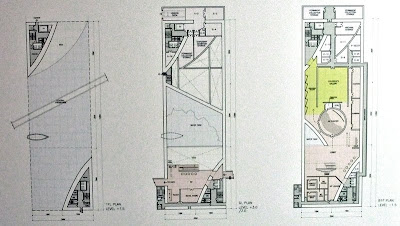 Floor plans of the museum. Note that in many spaces are not functional or left as  multiple height areas. As Gehry, Ando focused on creating a scenographic architecture.


The ambients are constrained, forced to fit into this sculptural form, beautiful but impractical. 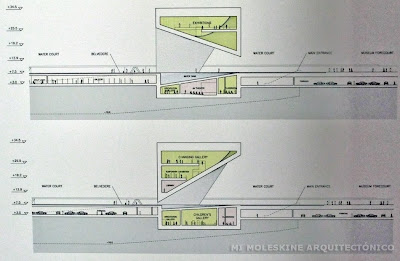 The idea of ​​Ando on inside the museum was to create a space that evokes the interior of a boat.

"The building's reflective surface visually blends sea and land, while its ship-like interior features floating decks that guide visitors through the exhibition space." 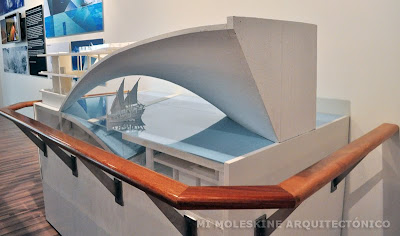 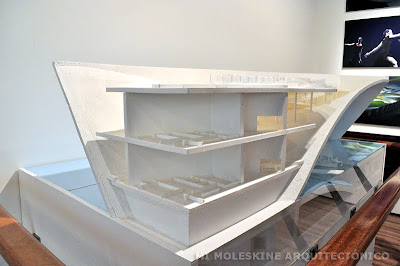 Well, I imagine that for Abu Dhabi authorities has been more important to create a monumental symbol, an icon, rather than dwelling on functional "details"  (which will mainly be suffered by the museum employees). Moreover, Ando will create a landmark, ​​using a simple, clear and powerful form while creating a playful and fun space. 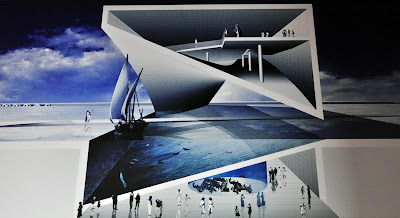 The galleries overlook to a blind arch that frames the dhow. You can see the ship from below, but not from above. 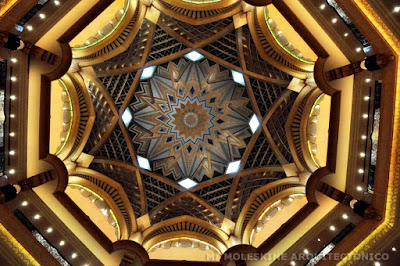 An internal view of the Palace Hotel de Abu Dhabi, where this exhibition about Saadiyat took place.
Posted by Carlos Zeballos at 10:06 AM