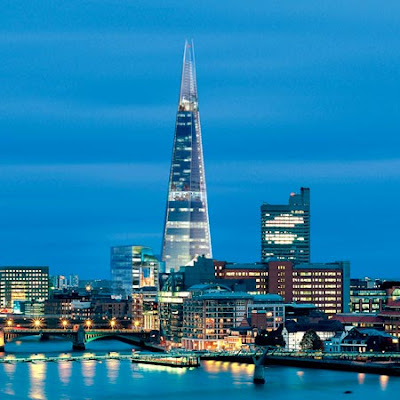 Urban regeneration goes beyond just real estate development, although the latter may be an important catalyst to the former. As David Littlefield writes, urban regeneration involves an effort to revitalize the social and economic choices of a locality. In this sense, the process of regeneration of the London Bridge area, is one of the most important urban developments in London and one of the most representative icons of this city ahead of the Olympic Games 2012. 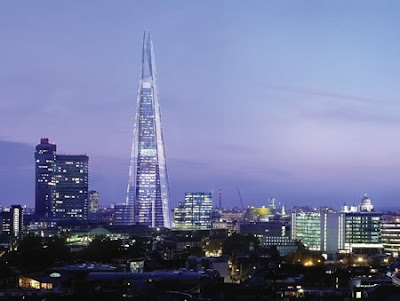 This process is presided by the Shard Tower (designed in 2000, built 2009-2012), a monumental work by the Italian architect Renzo Piano, standing as the tallest tower in Europe with its  1000 feet or 306 m. A building as powerful as iconic, it necessarily brings enthusiasts and detractors, both for the quality of its architectural design and urban relevance, as for the impact it has had on the London skyline. 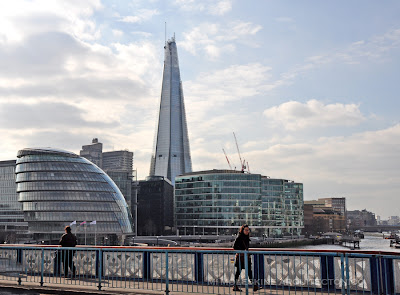 The Shard and Foster's City Hall to the left.


Located a few meters from the River Thames and close to the Tower Bridge, the Shard  is located on an irregular plot next to the London Bridge station, one of the most important nodes of the city, which includes a train station, two subway lines (or tube, as it is called in London) and bus interchange. 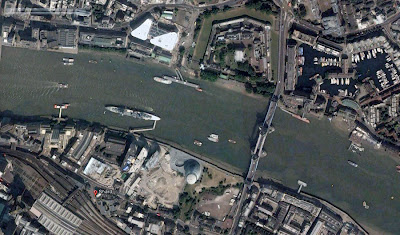 Before the Shard Tower in 2002 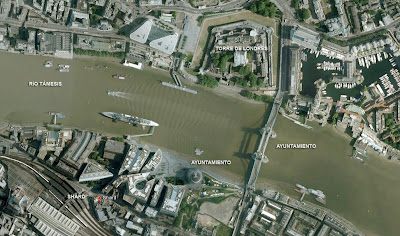 The skyscraper replaced the Southwark Towers, a building by TP Bennett Architects (1975). 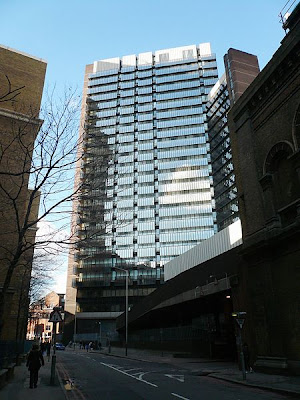 
The Shard is Piano´s version of "a city in the sky", a concept cherished by humans since time immemorial (a daring "punished" in the biblical Babel) and has had performances as the Umeda Sky Building by Hiroshi Hara in Osaka. 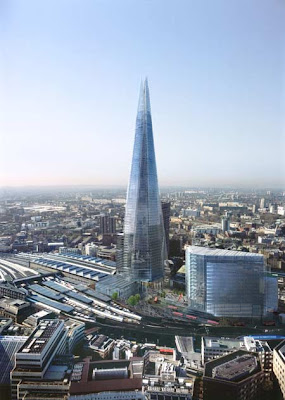 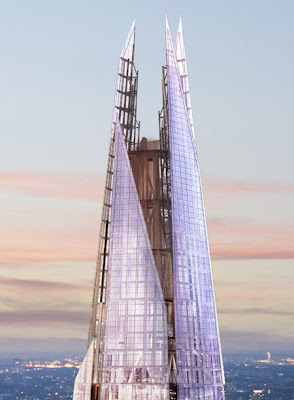 Piano's proposal resembles an irregular obelisk of faceted sides that slope inward. These faces, however, do not to meet at the apex, giving the effect that the building, as seen from afar, would seem to dissolve in the sky. 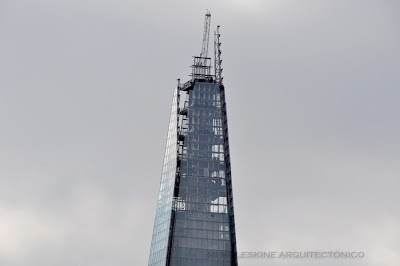 It is said that the form was inspired on the towers of the churches that populate London. 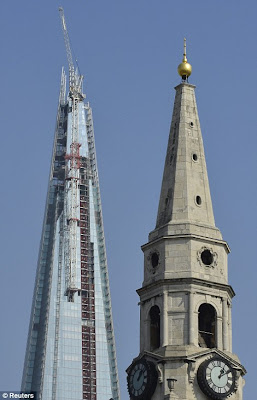 For some, the Shard tower also symbolizes London's power to rise  above the current global economic crisis. Paradoxically, 80% of this massive urban renewal program are owned by Qatari investors. 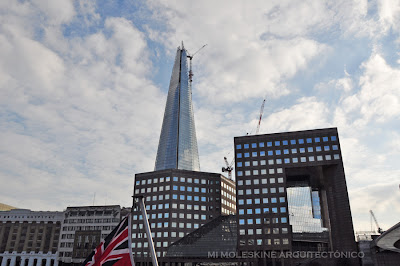 
The building has been designed as a vertical town, accommodating 8000 occupants in an area of ​​54.488 m2. The program includes mixed uses (just like the Burj Khalifa in Dubai), such as offices, shops, a 5 star hotel, luxury apartments and a panoramic gallery on the top of the 72nd floor. 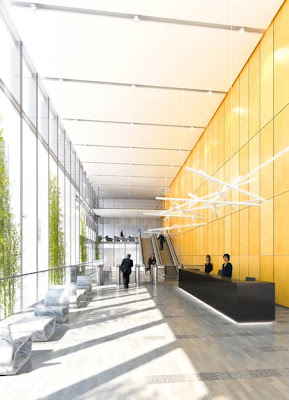 "The height is extreme but the footprint is relatively small. The building consumes 1/5 of the energy consumed by a village of 8000 inhabitants." says Piano, emphasizing the environmental concerns and the need for densification of cities.


The building "breathe" through naturally ventilated "winter gardens", a concept that Piano has previously used in his Aurora Place building in Australia . 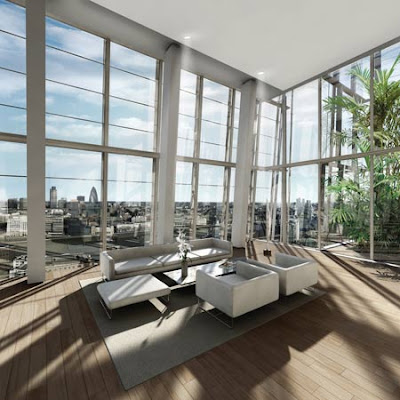 As important as the building is the design of public spaces and transport services. The proposal includes an expansion of the bus station, train and subway stations and connection to water taxis on the banks of the Thames. Also included are public areas for recreation, art installations, cafés and socialization areas. 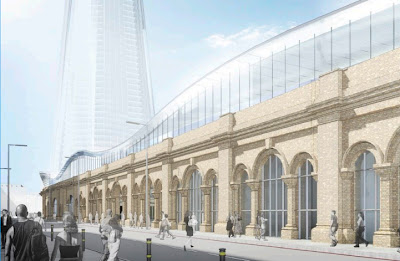 
In an area as important as London Bridge, in a cosmopolitan city like London, it was necessary to inject urban life, social exchange, economic value and at the same time, densify and make an efficient use of the precious space .

The construction of this megastructure had found, however, criticism and controversy, mainly led by the organization English Heritage, who claim that this volume distorts historic London's skyline, particularly the iconic Cathedral of St. Paul (although the building height was reduced from  its original 400 m to 300 meters). 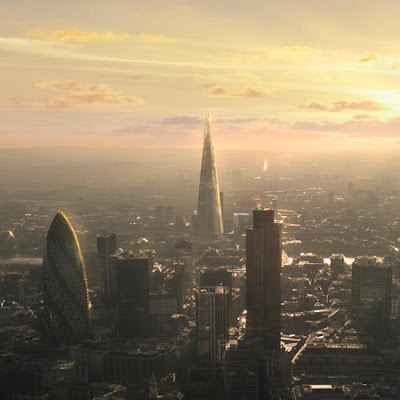 This is a process that had begun several years ago with the opening of the " Gherkin ", designed by Foster and Partners," whose huge, gaudy buildings overshadowed a humble, almost sweet Tower of London, a World Heritage Site " in words of UNESCO. 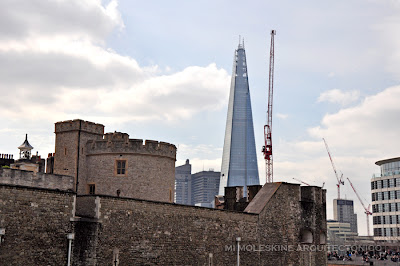 The Shard Tower view from the Tower of London.

Catherine Bennett, in his article " Is anyone going to put a stop to the vandalism of the profile of London? "published in The Observer, criticized the deformation of the skyline:

Does anyone, with the possible exception of bankers, want a symbol of how London is "powering its way out of the global recession"? ... But if, as Londoners, we'd said oh yes please, would we have chosen this import from the Dubai school of economic symbolism, erected in a place where it overturned, at a stroke of Prescott's pen, planning principles that protected the inner London skyline from speculators for half a century? 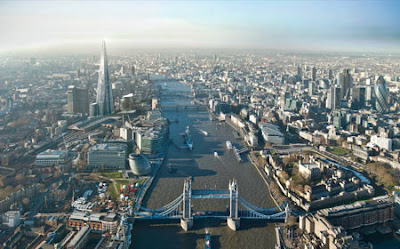 "I have always loved St Paul's, it is an icon of mine because it is a great building. It's fantastic. But when St Paul's was built, it was modern, just like the Shard is modern now. It wasn't a classic at the time. It became a classic." 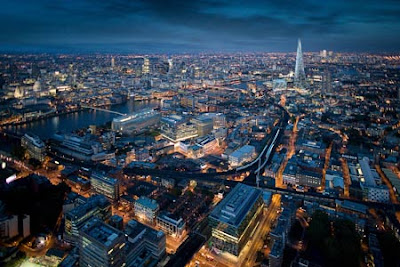 Sir Richard Rogers, a consultant to the Greater London Authority and also a friend of Piano and also co-author of the controversial (and today applauded) Pompidou Center in Paris said:

"The building is a masterpiece of architecture and design ... the contrast between the dome of St Paul’s and the transparent glass spire of the Shard reinforces the cathedral’s silhouette." 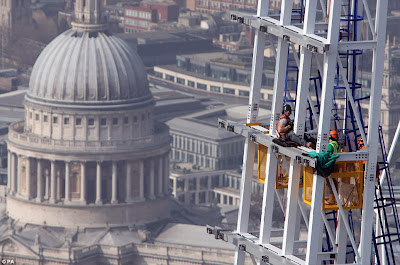 It is undeniable that, even without its completion, the building's visual impact on the environment is enormous, particularly due to the open view from the Thames. 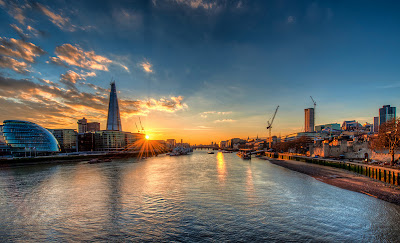 And although there is no denying the quality of design of the Italian master, perhaps the most serious problem is to open a precedent for many new interventions, which seek to emulate or surpass the height of the Shard, but not necessarily quality. 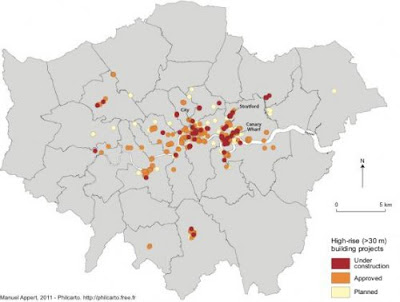 High rise buildings under construction, approved and planned in London 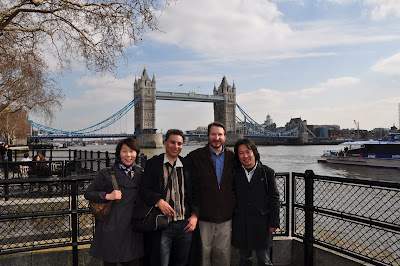 Posted by Carlos Zeballos at 2:51 AM