THE AGORA OF ATHENS VS. THE ROMAN FORUM 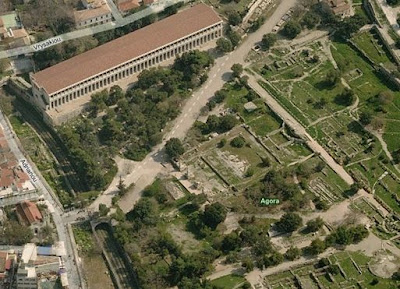 "The Greek agora establishes a formal typology, the Roman Forum defines the symbolism of the square as a center of an architecture and a society essentially urban. While the Greek agora contributed to giving the citizen self-consciousness, the Roman Forum made him aware of the state. "
Juan Carlos Pérgolis in his book "The Plaza. The center of the City"

It is inevitable to establish a parallel between the agora , the public space developed by the Athenians, and the Roman Forum. In fact, it is possible that the Roman space received influences from its Greek equivalent, a theory reinforced by the fact that in Etruscan cities (that preceded the Romans) no traces of a similar public space have been found. After all, the Agora was, as the forum, the most important public space in the city, where people would gather to discuss important aspects of their community. 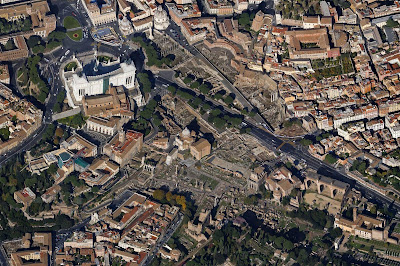 In terms of their relationship with the landscape, it is possible to establish similarities between the Athenian agora and the Republican forum. Both areas were located on flat land near or surrounded by hills (the forum was built on a drained swamp), and the way buildings are crammed into the original forum around the Capitoline Hill evoke the urban arrangement of structures around the the Aeropagus hill in the early agora. It should be noted, however, the imposing presence of the Acropolis, a visual and symbolic landmark -with no equivalent in Rome- that influenced the layout of the circulation and the use of public space in Athens. 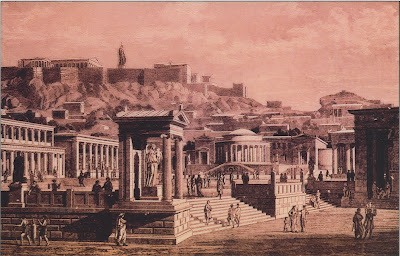 Drawing of the Agora with the Acropolis in the background


In later stages the Imperial Forums became more defined, geometric, and enclosed, forming a series of separate spaces. This geometric rationality is also observable in forums of Roman cities such as Gerash and Caesarea, or Romanized cities, like Petra. I wonder if the construction of Odeion of Agrippa in the center of the agora would have been an attempt by the Empire to define the urban space that would appear too "open" for Roman eyes. 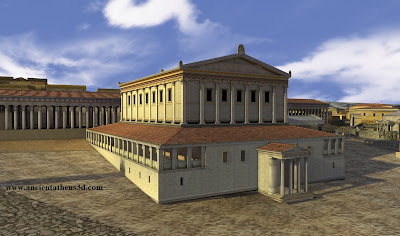 Odeion of Agrippa in Athens

In general, the old Roman forum shared with the Greek agora a commercial character, later adding civic, religious and even recreational activities, as eventually games were held in Rome during the Republic. 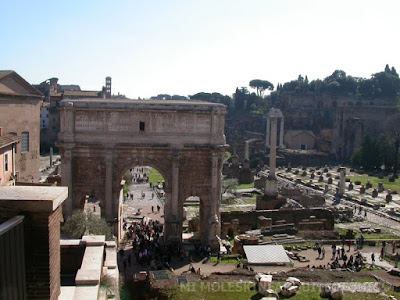 Monumental space in the Roman Forum

However, particularly in the imperial period, Roman Forum area evolved as a space for celebration and commemoration, both functional and symbolic terms, hence the monumental size of the structures. The forum turned into a stunning space for imperial power propaganda , and for this reason the commercial functions were relegated to a sector of it. Similarly, in Athens, the Romans forbade the market in the original agora, creating the so-called "Roman agora" for commercial purposes. 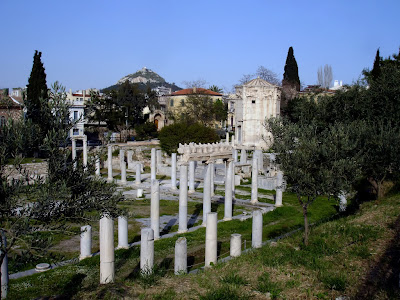 Roman Agora in Athens. In the background, the Acropolis

Religious buildings are also located in both the agora and the forum, serving a variety of symbolic functions.The Temple of Hephaestus , the god of the forge and anvil, presided over the agora in Athens, while in Rome, Minerva, patroness of the arts and crafts, was honored the Forum of Nerva. But the difference is noticeable in the scale of these religious buildings, being the Roman version the most monumental.
There are also architectural differences between the temples of the agora and the forum, although the Greek influence is evident in Roman buildings. However, while the Athenians placed the temple of Hephaestus on a krepidoma or platform which could be accessed from either side, as it was usual in Greek temples, in the Roman case there was only a frontal access through a staircase, leading to the temple placed on a much higher and more prominent pedestal . 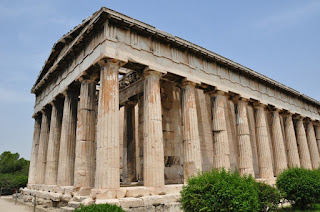 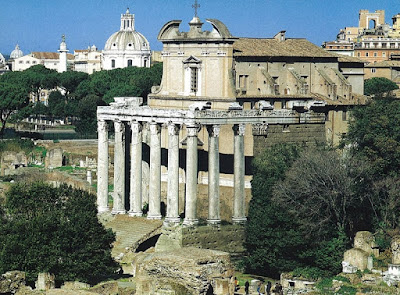 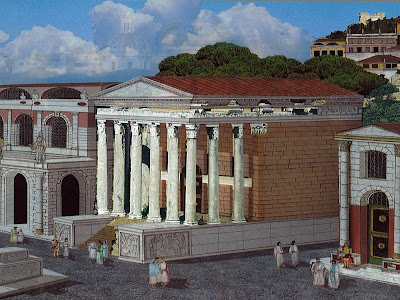 Temple of Antonio and Faustina in the Roman Forum,
In fact, although both spaces appear as the heart of their cities, their scale, formal, spatial and functional differences clearly express the kind of society they represented. These differences are evident not only between the agora and the forum, but in the evolution of the Republican forum to the Imperial Forums.
Finally, there is greater complexity in the development of the forum that in the case of the agora, expressed in the spatial distribution (sequence of squares and cloisters), the conformation of the building fabric (with types such as the basilica, for example), the landscaping of the urban space (including commemorative items such as arches and columns), the use of materials (like brick and concrete) and building techniques (such as the arch and the vault).

We should not forget, however, the great influence that the Greeks exerted over the Romans, both by the cultural concepts inherited by the latter as for the participation of numerous Greek architects and builders in the development of several Roman buildings and monuments.
Posted by Carlos Zeballos at 9:23 PM