A GLANCE AT VERUCCHIO, ITALY 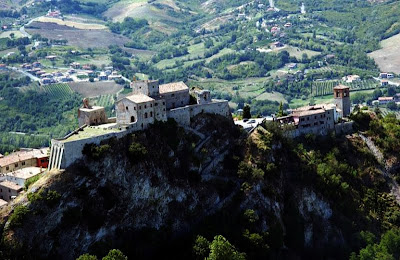 
Verucchio is a small medieval village perched on a cliff located in the province of Emilia Romagna, and demonstrates the ability of Italians to model the landscape. The Fortess Malatesta and the town around her are so rooted in the rock formation of the which they seem to emerge, as the territory is rooted in the psyche of its inhabitants. One can tell why the Italian word paese (village) shares the same root with the word paesaggio (landscape). 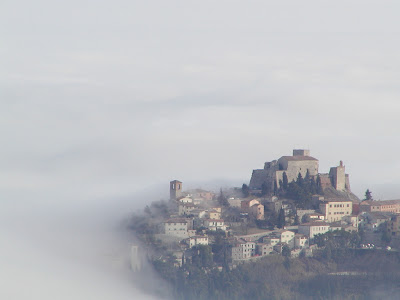 
Verucchio is a medieval village that stands on a cliff 330 m above sea level, dominating an agricultural plain crossed by the Marecchia river  (a curious name from the river, which means "small sea" and stresses its importance for navigation) . From there to the southeast, you can see the towers of San Marino, the smallest and oldest republic in the world, which  is located just 12 km from Verucchio. 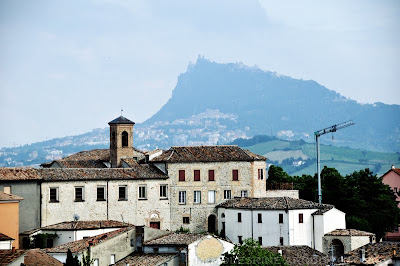 To the north, you can enjoy magnificent views of the coast of Rimini, bathed by the Adriatic Sea. These geographical qualities gave Verucchio its name, which comes from "verrucula", which in Latin means "little wart", a metaphor that contrasts the shape of the promontory with the plain that surrounds it: the "land of Rome" or Romania, which later became Romagna. 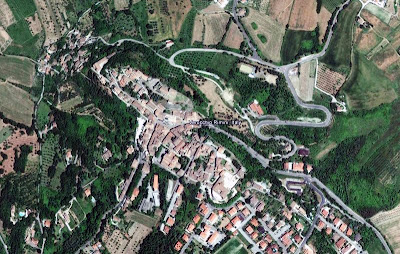 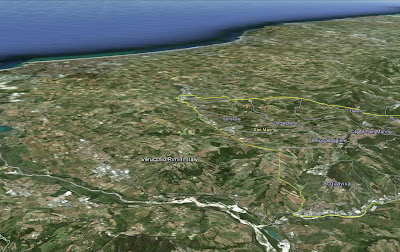 While this is a medieval city, archaeologists have found traces of pre-Roman settlements from  the tenth  to the seventh century BC, that demonstrate the  important role that Verucchio had during the Iron Age as a meeting point between cultures from the Adriatic, the Orient and Central Europe. 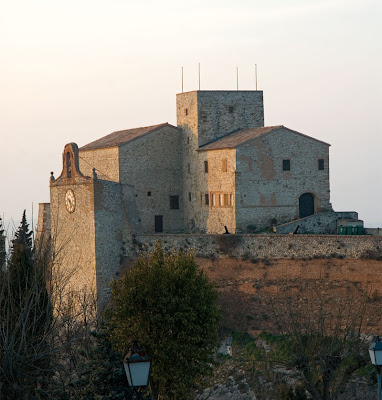 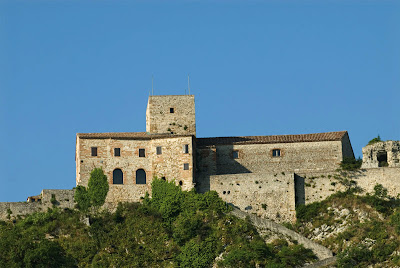 Verucchio is a typical medieval burgo, whose streets are arranged organically, adapting to the topography, and lead to an elongated square called Piazza Malatesta. On one side stands the City Hall, a neoclassical building erected in 1895 to replace an old structure. The arches on the first level afford more space to the square, while offering protection from extreme heat and rain. 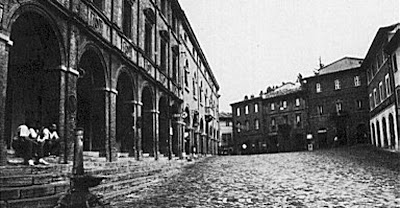 Also important are some religious structures such as the Church of Suffragio and neoclassical Collegiata (1864-74), both facing each other perpendicularly, and spatially linked through two separate courts.

However, the city's main landmark is the Malatesta Fortress, also called "Fortress of the rock." Because of its structure, materials, morphology and color, the stronghold seems to be an extension of the rock that supports it. 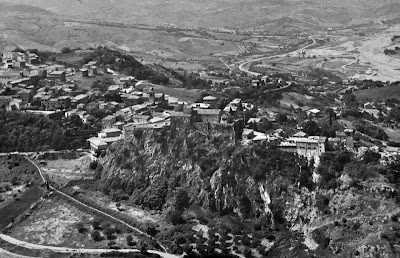 Between the twelfth and sixteenth centuries this Romanesque fortress was developed as the bastion of the Malatestas, an infamous family of condottieri (mercenaries) who had control of the Emilia Romagna province. Dante Alighieri, in his famous work "The Divine Comedy", depicted one of the infernos with the case of Giacionto Malatesta, who killed his wife Francesca and her lover Paolo, after founding them in-fraganti commiting adultery (of course, in Dante's version,  the punished ones in hell are the lovers, not the murderer). 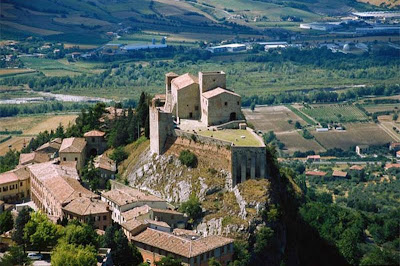 
The complex, built in the fifteenth century on the remains of a thirteenth-century fortress, is composed of a series of rooms arranged around an oblong space dominated by a watchtower. 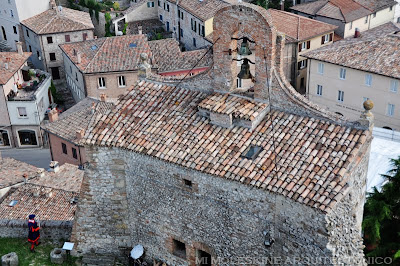 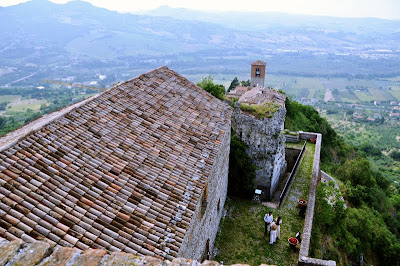 Also noteworthy is the Great Hall, which holds the Malatesta family tree. It is a rectangular room, topped by a roof of wooden beams. 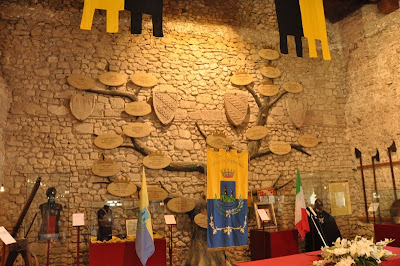 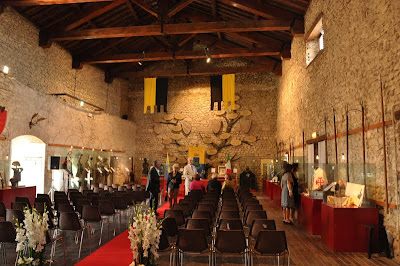 This stronghold was impregnable for centuries, to the point that it could only be conquered in 1462 by Federico Montefeltro, using a deception similar to that of the Trojan Horse. 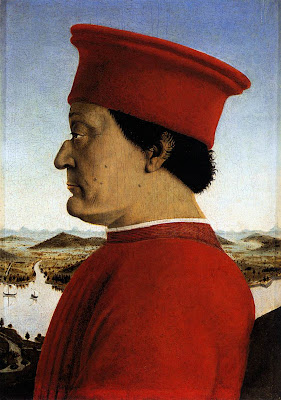 Federico Montefeltro is this man that Piero de la Francesca portrayed as one of the emblematic examples of Renaissance painting (1465-1466). The particular shape of his nose is because, after losing an eye in a tournament, he had his nose "operated" in order to expand his range of vision. The other side of the face was horribly deformed.


But, aside from these architectural features and interesting buildings, what most impressed me about Verucchio was the way how all the different components of this village were so smoothly and aesthetically articulated, despite coming from different times and belonging to different styles. 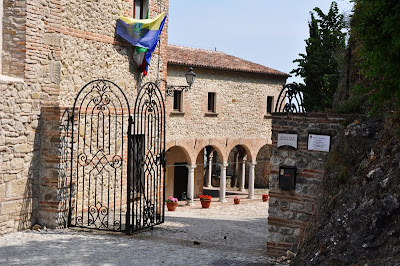 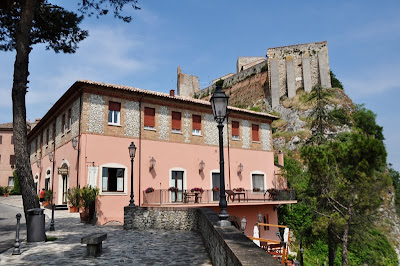 The  harmonius dialogue of materials (brick, stone, tiles) are coupled with the balance between built elements and open spaces, cleverly arranged to allow a glimpse views of the surrounding landscape (we've seen a similar case in the city of Siena ). 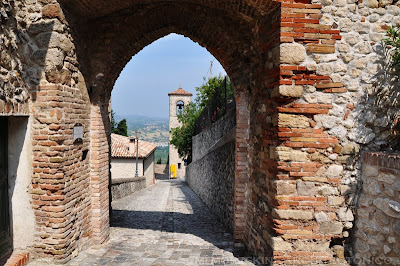 The built and empty areas are interspersed to allow permeability between the landscape and the urban space. 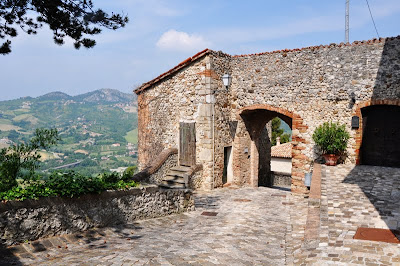 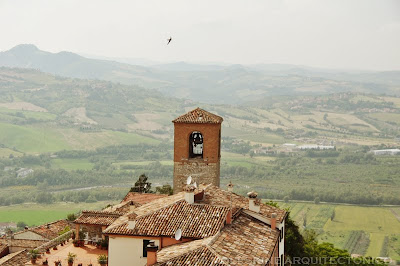 This delicate balance is both topological, ie allowing foster relationships between components of a place, and topophilical, ie, expressing the intimate bonds between people and the environment. 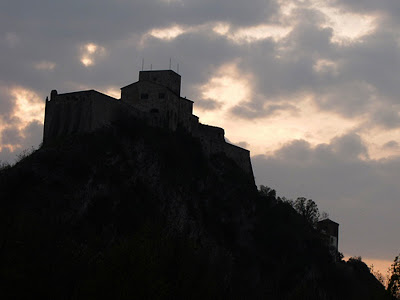 Perhaps the reader will ask "all this is beautiful, pleasant to the eyes of a tourist, but it must be difficult to live here, far from the amenities and services of modern life." However, the harmonic balance is not only aesthetic but economic and productive. The old town of Verucchio is linked with the new town, which accounts for most services and contemporary buildings. 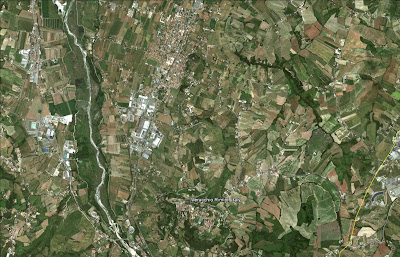 Planners have had the good sense not to stifle the historical village with a modern growing city but to separate the two settlements by rural areas, avoiding the old city to turn into a museum mummy, but to create a polycentric urban area to supplement the cultural, historical, economic and productive aspects of the territory.

"What makes a good landscape? I confess I do not know. How did they made the landscape of the Italian hills, wooded and planted at the same time? How did they put towers on ridges and fields on the hillsides, villages on the steeper slopes and protected areas on the edges of rivers and streams, in the high forests  in the tops of the mountains?

The crucial issue is that this landscape is not natural. It is absolutely fatto dalla mano degli uomini [made by the hand of men], as a famous brand that Italy coined years ago."
Ruben Pesci, Ambitectura 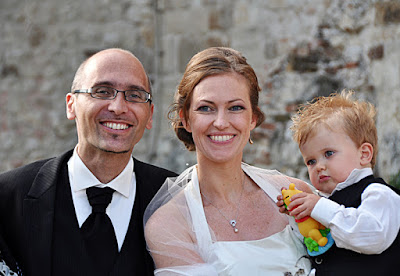