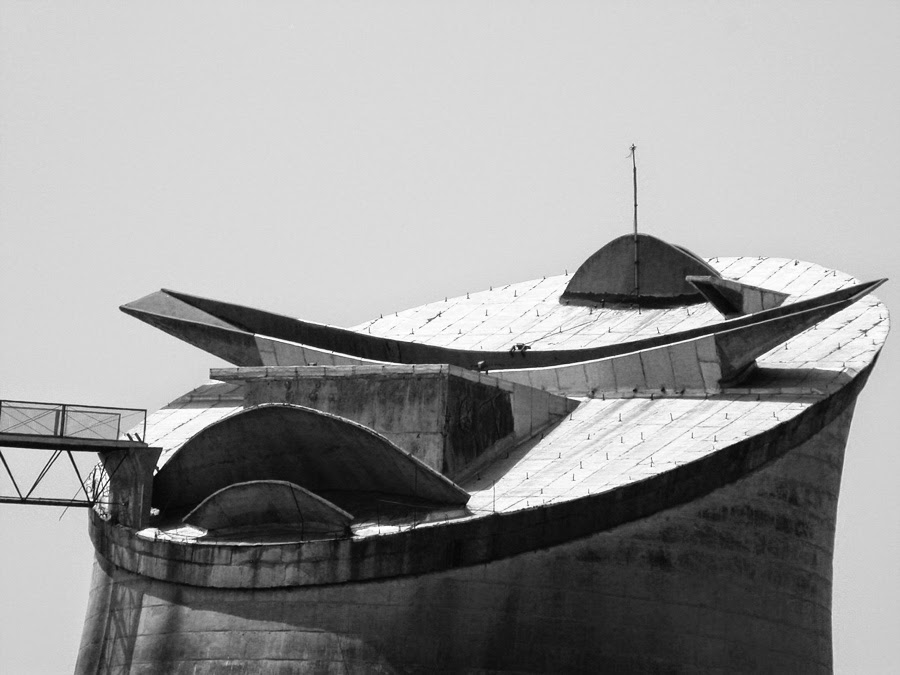 Detail of  the Palace of the Assembly, Chandigarh.
All the photos belong to Carlos Zeballos Velarde, except as otherwise indicated

We live among objects, we move through constructed spaces, the world is manifested through them and we erect our reality by means of a sort of recomposition of fragments of the perceived and interpreted information. The architecture is thus not only a shelter for our body, it is often a filter through which the order that governs the universe is manifested. This order is perceived, subsequently related and finally transformed into individual and collective meanings. It was always like this and it was fine.

Accustomed today to remain in virtual spaces, satisfied with simple images, hurrying to distinguish our preferences with a "like it", we  increasingly do not recognize the revelatory function of architecture, or at least we select the most superficial and useful information to the extent that it will allow us to stay in comfortable spaces, promoting the genesis of an architecture for the media that hides behind its epidermal formal fanfare, the monotony of standardized production and the lack of attention to what the context demands.

Three architects who share these concerns met in a cafe in Arequipa and agreed to share a vivid architectural experience which transcended the ordinary and, in some way or another,  influenced their way of perceiving the world or finding themselves.  They hope that through these experiences they will encourage more people to tell their own ones and thus made a small contribution  to put architecture in the proper place.

I will share with you my own experience. The other ones are available in the blog in Spanish.

Monumental. The scale of the Capitol in Chandigarh overwelmed me. The place conveyed a sense of grand, almost megalomaniac power. It was made ​​to impress, but it seemed to have forgotten to accommodate people. In that hot morning in the Indian spring it would have been very comfortable to sit under a tree, but this sort of banality would had interfered with the colossal perspective of the space, something that the Swiss architect who conceived it was not willing to compromise.

Still, I was grateful to be standing for the first time before a building by the great master Le Corbusier and to enjoy the landscape of the Himalayas mountains, emerging as a backdrop to the east. I had previously only seen reproductions in black and white of this complex, so it was a very special experience to be standing there, admiring the grandeur of the Capitol,  the strength of their volumes, the roughness and plasticity of the concrete and to be able to breathe the passion for design that the Swiss master embedded in this work, from the urban design to the details of the murals and carpets. 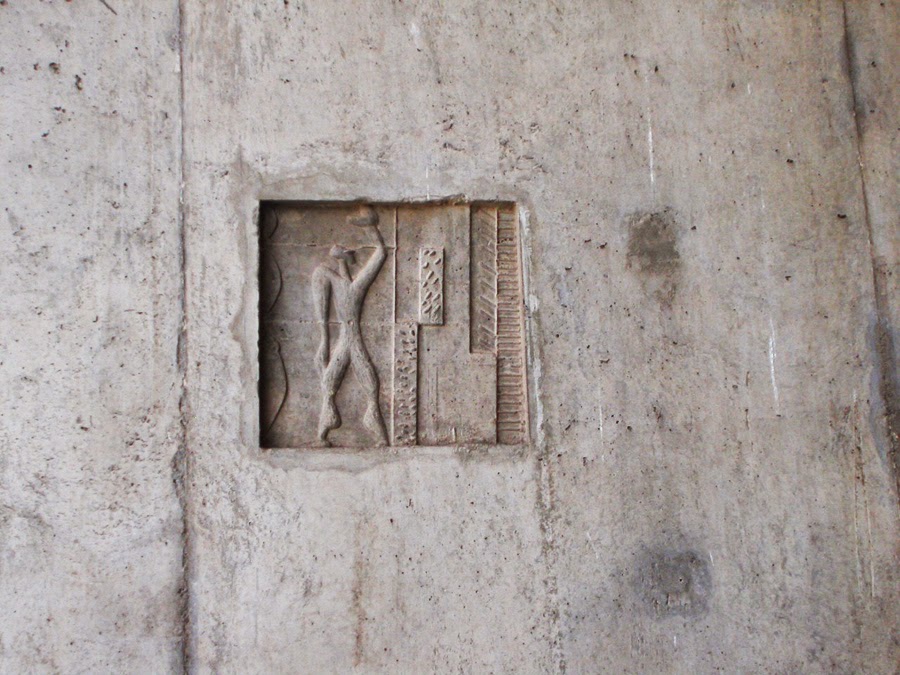 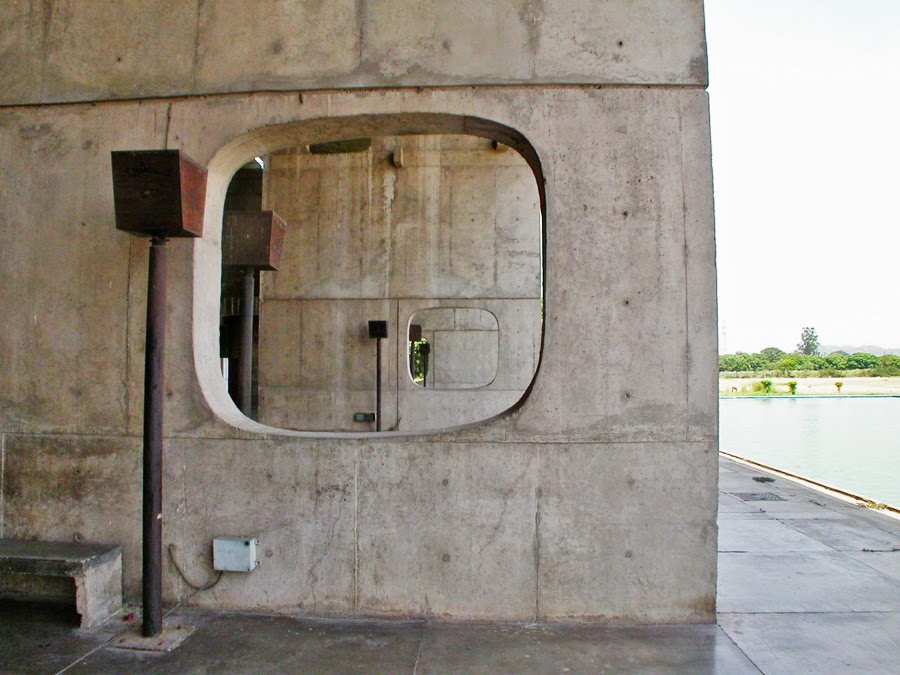 I arrived there escorted by a friend's relative and after he showed me the complex from afar, he prepared to return to the city center. When I insisted to approach in order to have a better look of the buildings, he nervously told me that it was complicated, that I would need to ask for a special permission the next day. I could understand his nervousness because Chandigarh is located near the border with Pakistan , in a very tense area where security measures are taken seriously.

But I was not going to give up just like that. I went to get that permission and the initial reluctance of the officers gradually became an effective collaboration. They were flattered by the presence of such an exotic visitor, and soon I left that office carrying the permission as well as many souvenirs and information about the city. 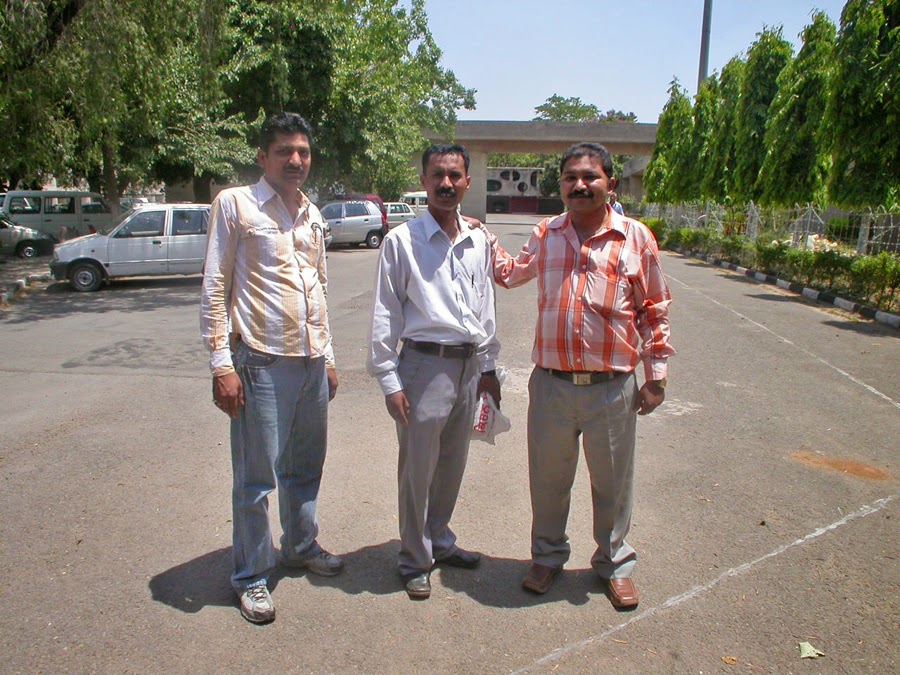 Early next day I was back at the Capitol, with its three symbolic buildings: the Secretariat, the Palace of the Assembly and the High Court. Of all the elements of the complex it was the Palais de l'Assemblée the building that moved me the most, due to its mathematical grid of brise-soleil, so necessary in that hot climate, and its photogenic south facade reflected in a water mirror. 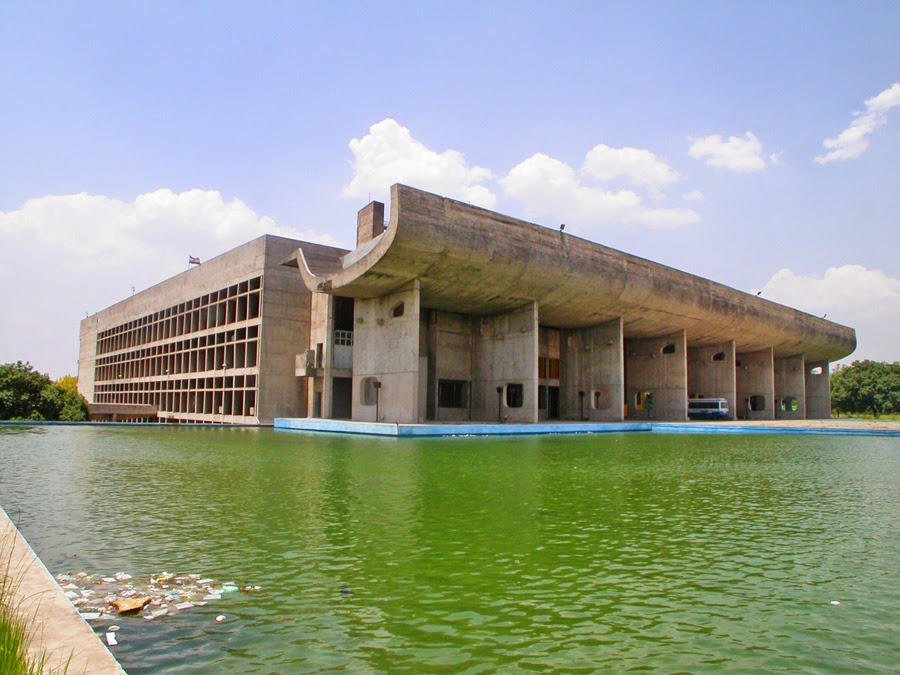 The grid made that heavy rectangular concrete box look lighter, and its rational lines contrasted  with the sculptural volume of a truncated hyperbolic shell, a monumental form whose inspiration came from industrial chimneys. 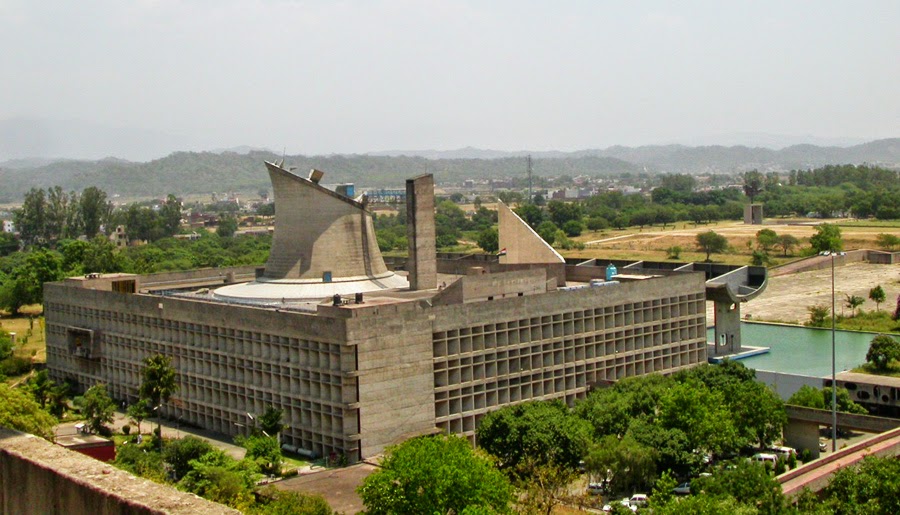 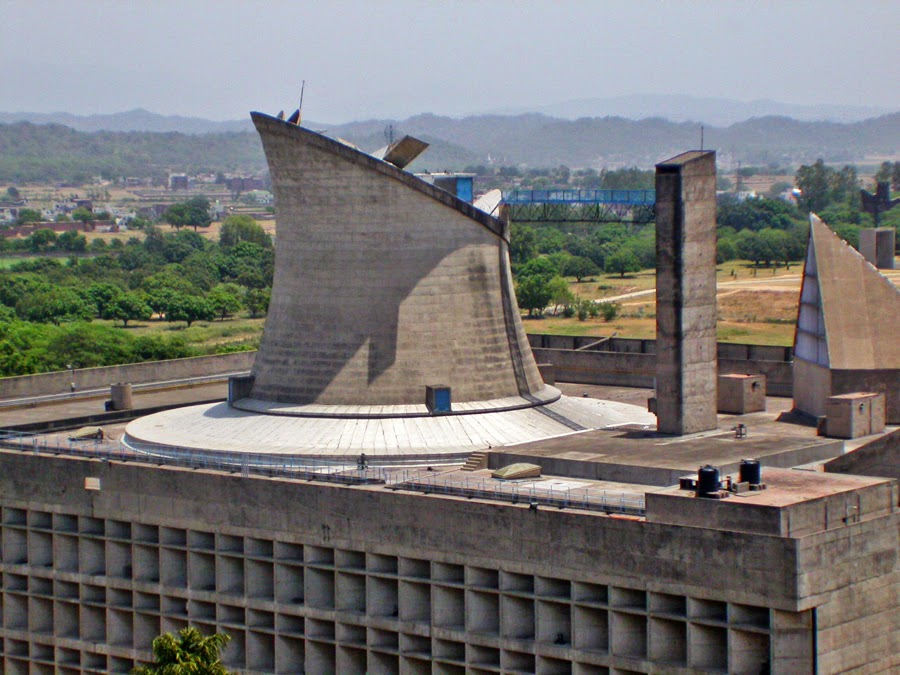 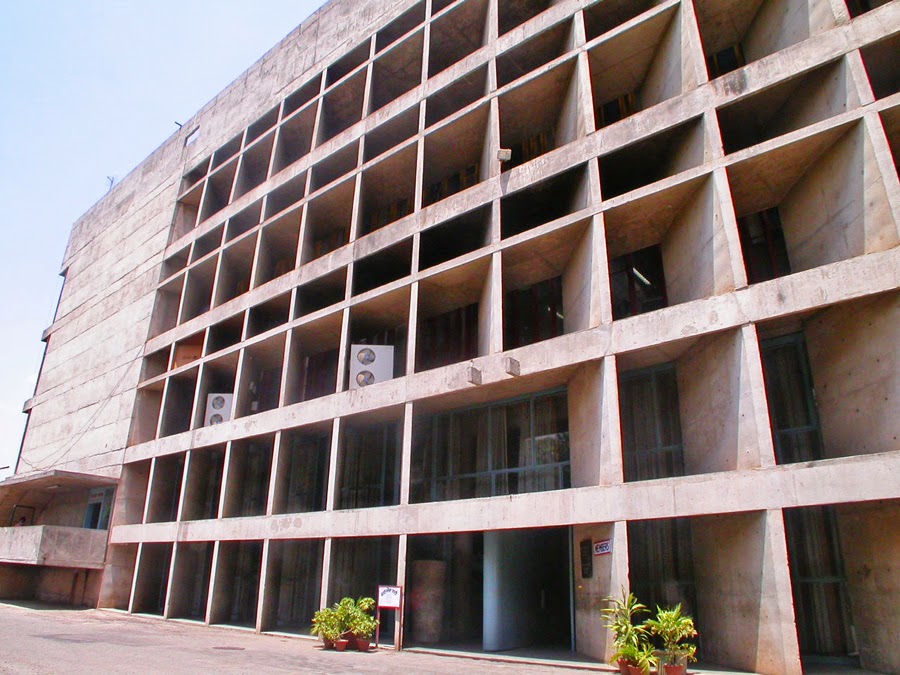 I made that tour escorted by a soldier armed with an automatic gun, because security was particularly strict. 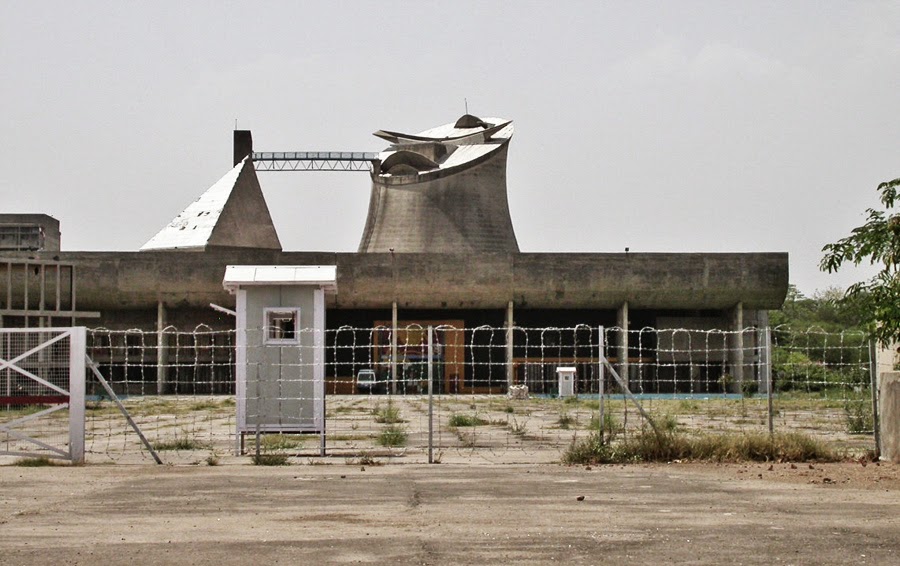 We entered the building, adorned with murals designed by Le Corbusier himself, who had not neglected any details at the time of conceiving his masterpiece.

Inside, the indirect light passed through the brise-soleil and gave a depth effect to the hypostyle hall, reminiscent of the classical temples that the Swiss master had admired so much during his journey of discovery to Greece. 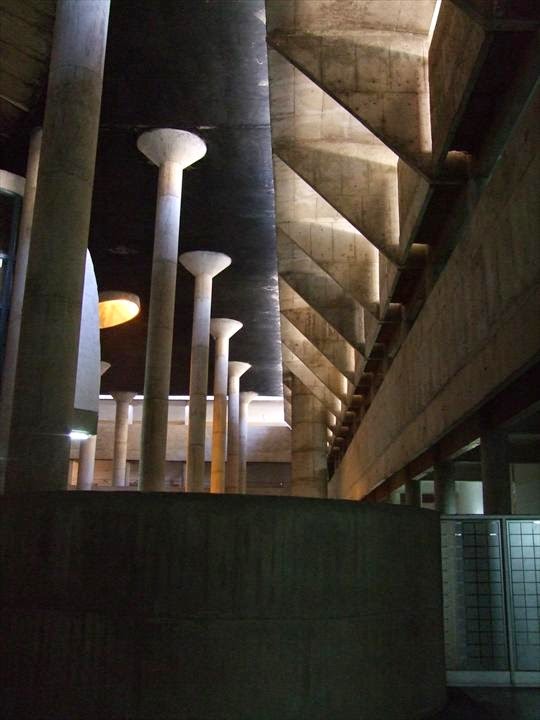 In the midst of that forest of columns the curved volume of the assembly emerged as an impetuous volcano. 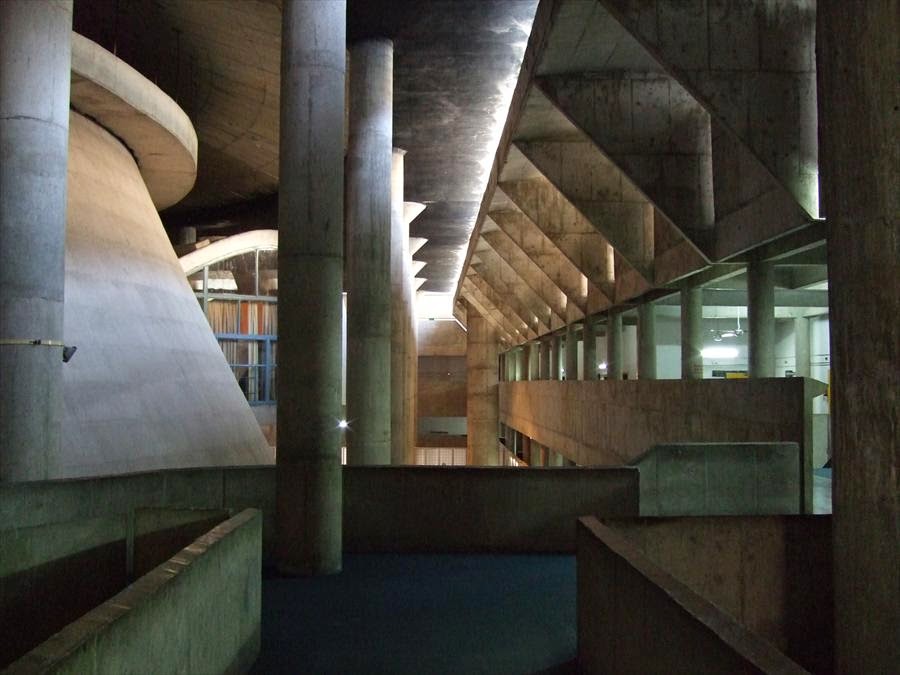 Then, we approached to the main chamber, which luckily could be accessed at that moment due to the recess of the legislators. Neither the books on Le Corbusier or the treaties on modern architecture that I had previously read could have prepared me for that impression. The monumental  space, molded in that 15 cm thick concrete shell, raised above the upholstered seats of the legislators. The truncated section of the hyperbole accentuated its directionality and its geometry favored the acoustics. The height of the space was also conceived due to climate concerns, allowing the circulation of airflow through conduction. 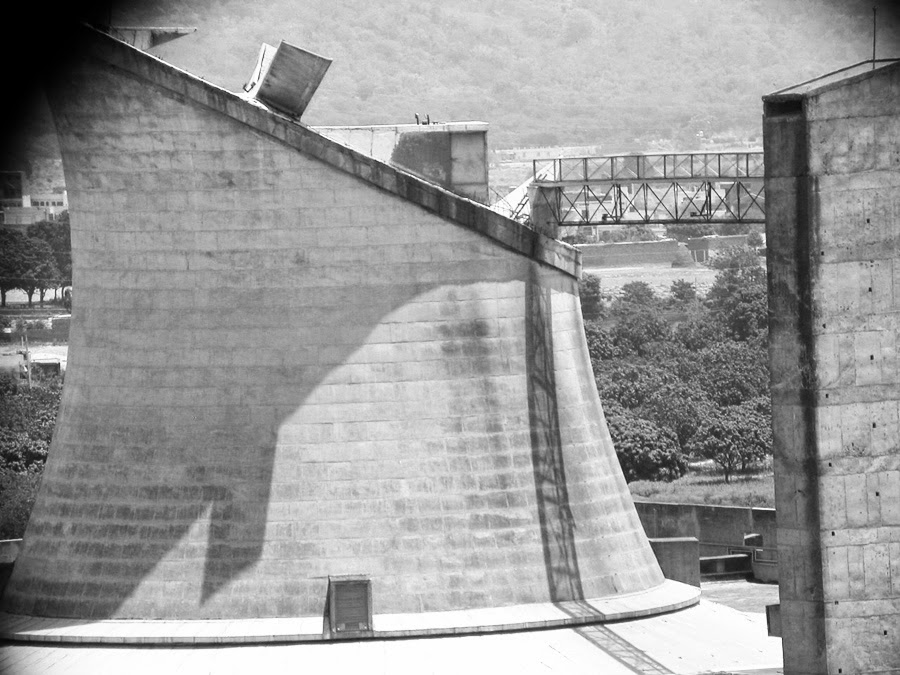 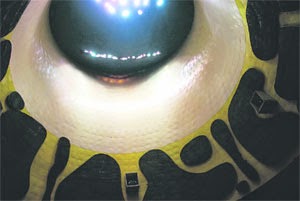 Photo courtesy of The Tribune

But that place did not seem to me a civic space, but a sacred one. The light filtering indirectly produced a spiritual effect, that I would encounter again few years later in the chapel made ​​by Le Corbusier in Ronchamp. However, unlike the white walls of the church, the epidermis of this concrete room was covered with colorful aluminum sheets, which seemed to crept the walls as a sort of infection, producing colored spots. 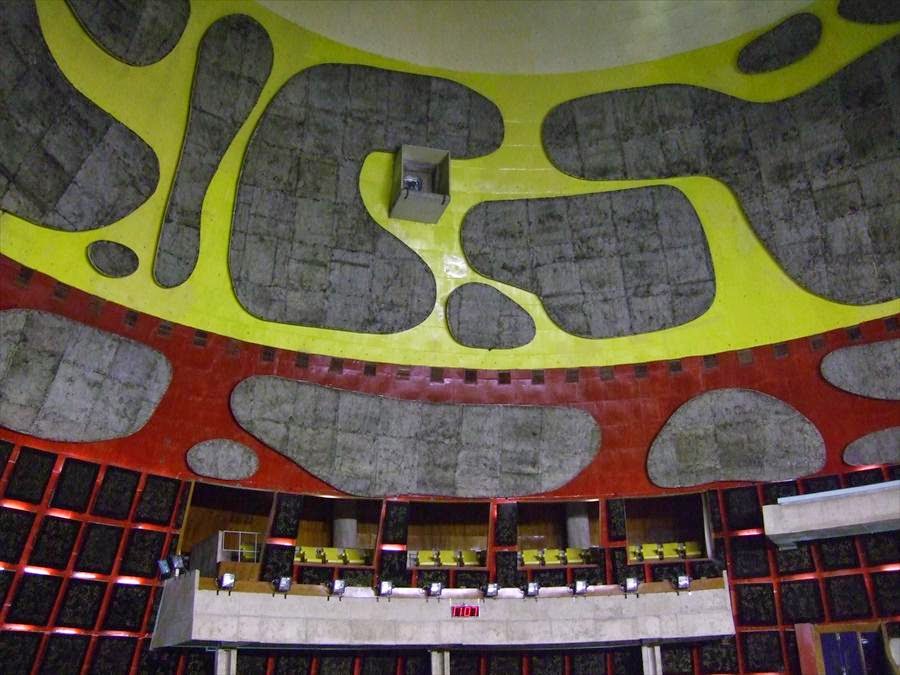 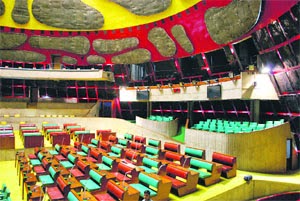 Photos courtesy of The Tribune

It was a sublime moment that seemed not to be shared by the soldier who was accompanying me, who insisted that photographs were strictly prohibited. I tried to imbue every detail of that moment  in my memory, knowing that this experience will probably not be repeated. I tried to breathe the most of this beautiful, grand, dramatic space. But suddenly, with an unfriendly gesture, the soldier let me know that the visit was over.

Other Works by Le Corbusier

Posted by Carlos Zeballos at 9:47 PM