MY SON IN VIETNAM 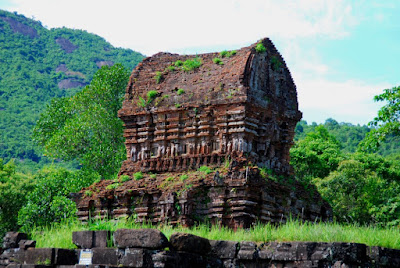 Champa complex of My Son in Vietnam. Phots courtesy of Global Citizen .

"I Left My Son, Abandoned In The Middle Of Nowhere" I wrote on my Facebook status, to the dismay of my friends. In fact, the "My Son"I was talking about is an archaeological site of Hindu architecture in the middle of the Vietnamese jungle, which was declared a World Heritage Site by UNESCO . Its dilapidated condition, due to the passage of time and particularly to the ferocious U.S. bombing during the war, has left little to see for visitors, especially if compared My Son to other monumental sites in this part of the world. However, during a visit to this ancient capital of the Champa kingdom, it became clear the stylistic relationship to other similar complexes in Indochina, and the important influence of Hindu art and architecture, before Buddhism became prevalent in this part of Asia . 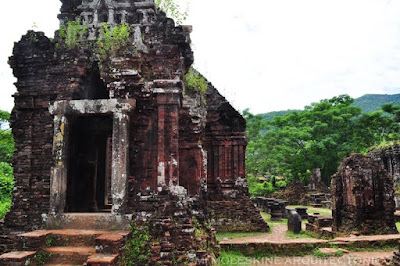 CHAM AND INFLUENCE THE HINDU

The Chams were an ethnic group of fishermen and farmers who flourished in Vietnam from the second to seventeenth century. The Cham created the Champa civilization and shared historical ties as well as conflicts with other cultures around the Mekong River . In addition, the civilizations of the Indochina Peninsula received important Hindu influence, as expressed in the art and architecture of the area. My Son precedes in time and shares characteristics to those structures such as Prambanang in Indonesia, Ayutthaya in Thailand, Angkor in Cambodia and Bagan in Burma (Myanmar). Even in Buddhist structures like Borobudur in Java, Indonesia maintained features of Hindu architecture (curiously, Buddhism would eventually prevail in the entire area, except for Indonesia which is mainly Muslim). According to UNESCO, My Son would have been a center of cultural exchange and the place where Hindu architecture was introduced to Southeast Asia. 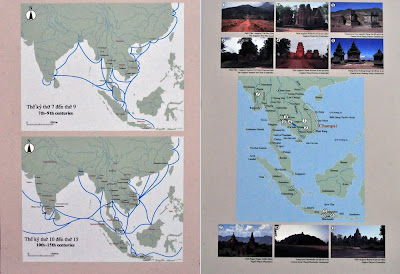 Left: the Champa Kingdom maritime trade with other civilizations in the region. Above, VII to IX century. Below, tenth to thirteenth centuries.
Right: Hindu complexes in Southeast Asia.


Some common features between My Son and other Hindu sites are, for example, the presence of towers of complex roofs and pyramidal shape; the presence of linga, phallic sculptures that represent fertility and are also associated with good harvests and the presence of representations of the gods Shiva, Vishnu and Ganisha, among other deities of the Hindu pantheon. 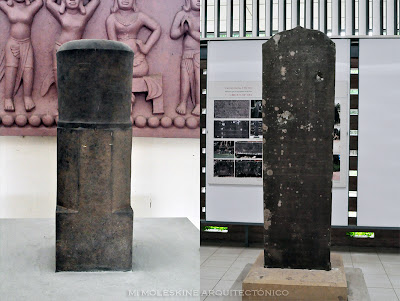 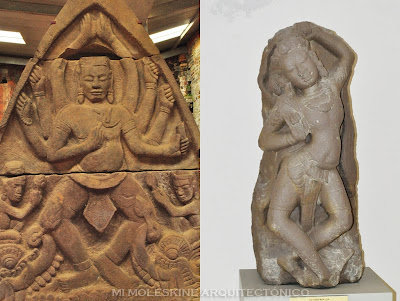 LOCATION OF MY SON

It takes more than an hour to get to My Son, located about 70 km from Da Nang in central Vietnam. On the way, I find it hard to imagine the reason for choosing this site in the middle of jungle to a city building. However, a panoramic look gave evidence of a special configuration of the place. 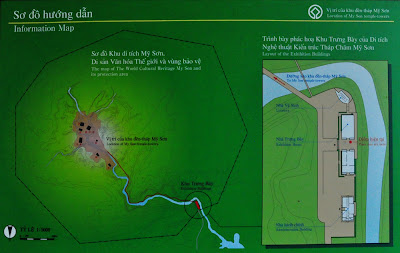 My Son is located near a river, in a circular valley, a sort of "nest" of mountains, one of which stands to the southwest. 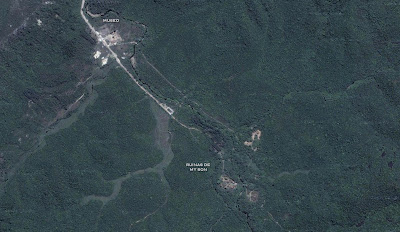 I wonder if the choice of location would have been some kind of relationship with the Chinese geomancy or Feng Shui , which is known to chose this type of configurations to facilitate the flow of positive energy in the city, or if that mountain would have symbolized the mythical Mount Meru, the axis of Hindu cosmogony. 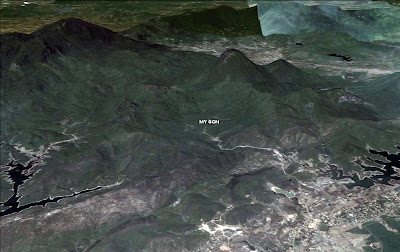 While I have not found literature to confirm these hypotheses, in any case, I suspect that the site configuration must have had an important role, both symbolically and defensively, especially considering that My Son was the religious and intellectual center of the Champa kingdom. 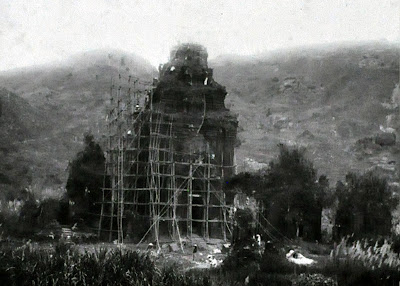 The Citadel of My son was developed in several stages over the centuries, and is composed of several different towers surrounded by auxiliary buildings. 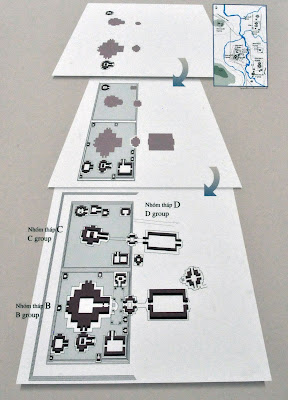 Evolution of the set of My Son towers between the seventh and thirteenth centuries. Image taken from the site museum.


Basically My Son consists of 68 towers arranged in several groups of buildings, set on both banks of the river, delimited by rectangular compounds with a predominantly east-west orientation. These complexes were presided by a main temple called Kalan and surrounded by smaller shrines and bounded by low walls. 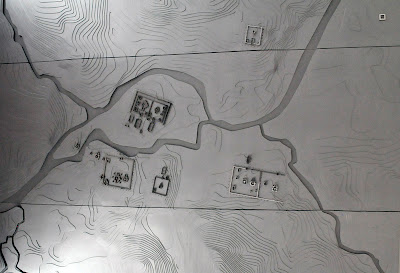 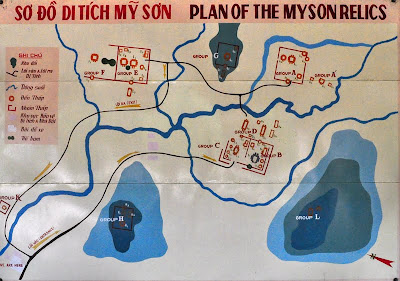 The first buildings were made of wood, but a series of fires forced to replace it with brick and sandstone. By using this material, Cham towers became more monumental and resistant. The roofs may be flat or in the shape of ogival pyramids. Their height varies, may be up to 24 m. 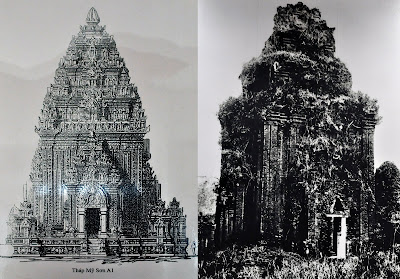 Hypothetical reconstruction and current status of one of the towers.
Images taken at the museum. 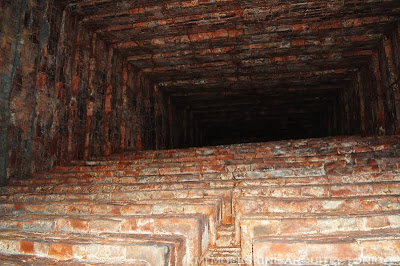 Unlike the western vaults, the ogivall "vaults" were built by overlapping rows of bricks that were gradually having a setback to converge at the top. The interior of the same was hollow, because it represented a cave or a womb.

Their layout is generally square, although there are also some of rectangular base. The entrance gate was oriented towards the east, which is the direction of sunrise, the point where the cosmic movement starts. 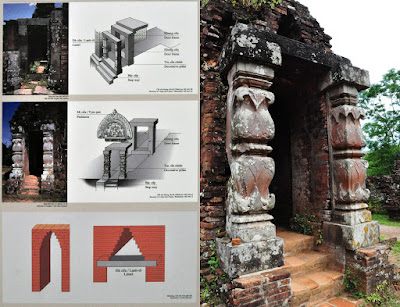 Art and style of the pillars at the entrance of temples. 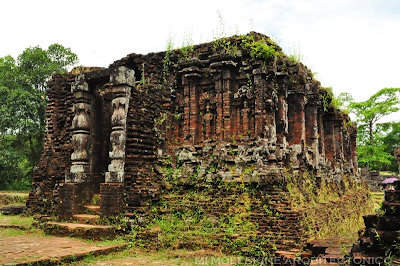 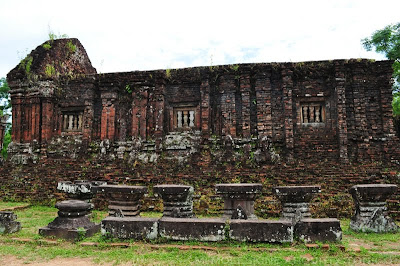 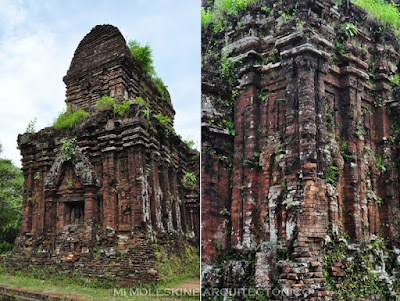 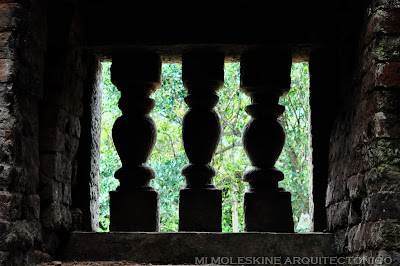 Balusters, in different styles, are common in the architecture of this part of the world, from Angkor Wat in Cambodia to Luang Prabang in Laos .


The bricks that make up the buildings measure 31 cm x 17 cm x 5 cm and were placed without mortar. However, according L. Binda, P. Condoleo and others (2006), the cham used a special resin obtained from dau rai trees. 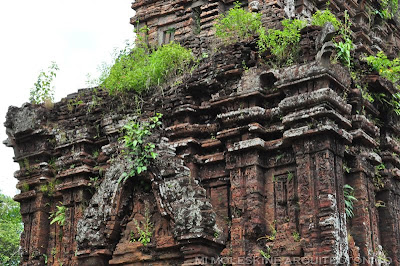 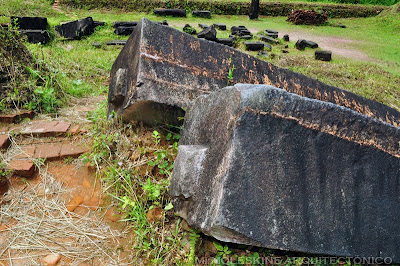 These wedges were carved in the stone pillars to increase resistance and stability.


Besides, the towers were decorated with floral, plants, animals and humans Hindu style. 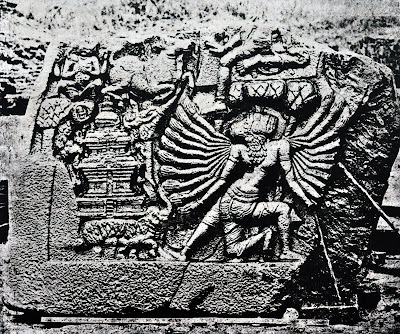 Among the most important elements there were some fountains called yoni-linga, which were the representation of sacred genitals, representing the union of the Shakti and Shiva gods. 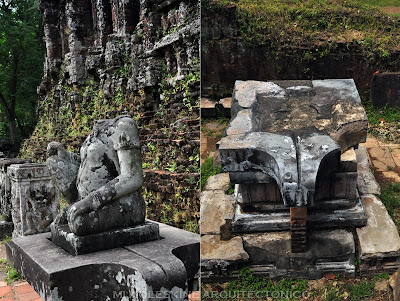 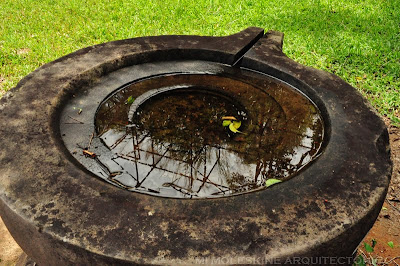 It is likely that some of the yoni-lingas and / or sculptures of deities have been venerated in a ritual space defined under wooden structures mounted on stone bases. 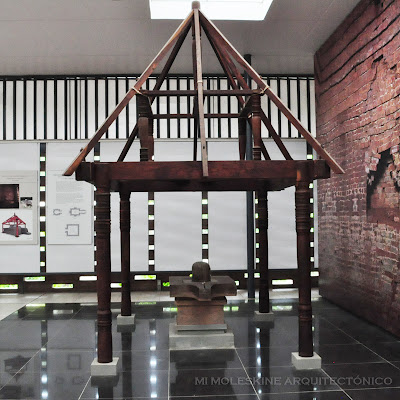 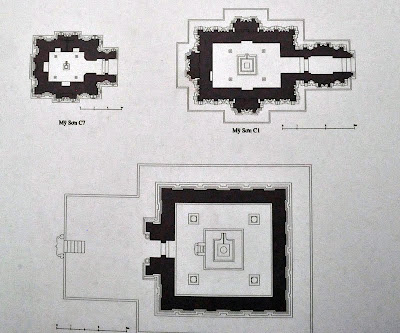 However, in this tower, instead of lingas there are bombs that were dropped by American B-52s but did not explode, and are a testimony of those terrible memories of the war, which are present throughout the country. Interestingly, today the bombs are rather used as bells. 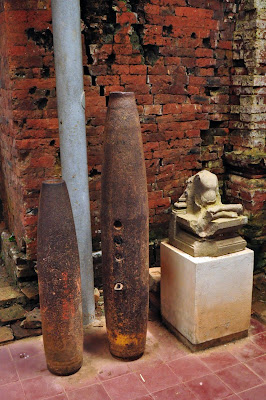 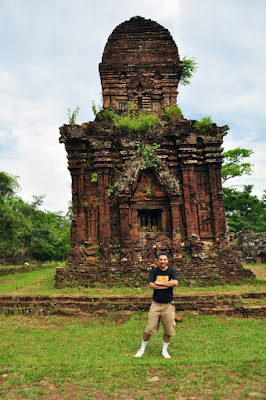 Posted by Carlos Zeballos at 9:23 PM