AYUTTHAYA, THE GHOST CAPITAL OF THAILAND 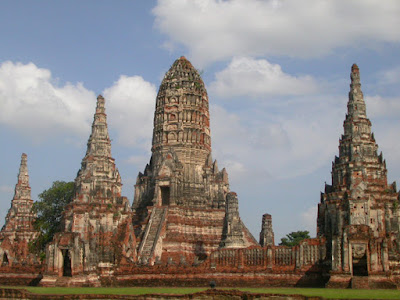 Ayutthaya (full name Phra Nakhon Si Ayutthaya, "impenetrable city” พระนครศรีอยุธยา) was the capital of the kingdom of Siam, the name under which Thailand was known in ancient times. 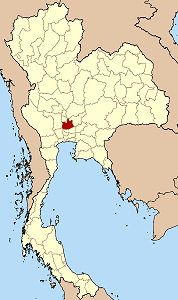 Location of Ayutthaya in Thailand.
See location on Google Maps


It was a splendid city, founded in 1350 by King U-Thong, who arrived to this place trying to escape the pest epidemic in China. Erected in the conjunction of three rivers, Ayutthaya soon became one of the major cities in Asia, with its magnificent Buddhist temples and gorgeous palaces . 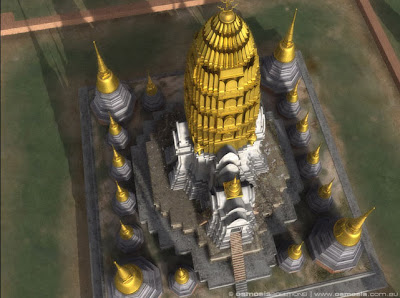 After 400 years of glory Ayutthaya was invaded by armies from Burma (now also known as Mynamar) in 1767, who burned, looted and devastated the city, leaving it in ruins and destroyed many of its literary and artistic jewels. The capital of Siam was in the following moved to Bangkok, and a lot of the remains of the old city to museums. 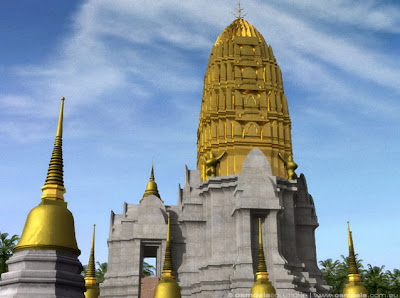 Ayutthaya Reconstructions of Ayutthaya
3D images courtesy of Osmosis and the University of Melbourne, Australia

THE CITY OF WATER.

The layout and location of Ayutthaya were closely linked to water. It was built in an island, in the delta of three rivers. Additionally, canals were built to facilitate communication within the city. 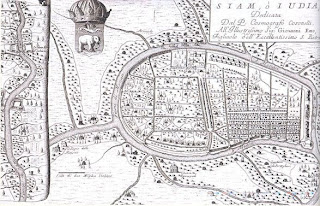 Engraving of Ayutthaya in 1683 by an Italian traveler.

The ancient Siamese capital contains many remains of monuments that evoke its previous greatness, some of them will be discussed in this blog.

The term Wat used in Cambodia, Laos and Thailand refers to a temple. While the word wat literally means school, it actually refers to a Buddhist temple housing a school for monks. In everyday language it refers to any temple except for mosques.

Within the wats, we can distinguish a few types:
- Chedi, a bell-shaped structure, also called stupa where the relics of Buddha are kept. 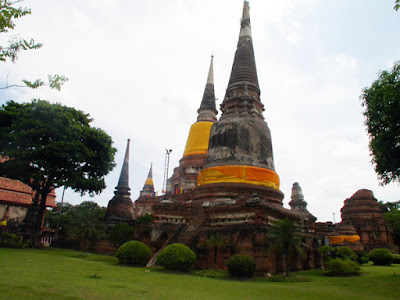 - Prang, is a tower that usually culminates in a point and is richly adorned, characteristic for major temples 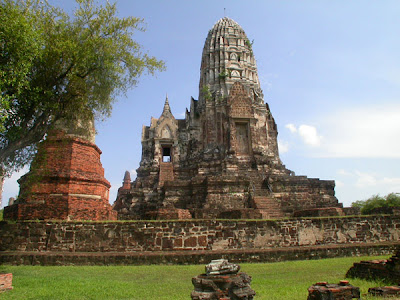 Buddhist cosmology considers Mount Meru, where the relics of Buddha are preserved, as the center of the universe. It is believed that buildings like Prangs or Chedis are attempts to replicate Mount Meru. Buddha's relics are preserved in these structures in order to prove that Buddha is the most important being in the universe, that he obtained enlightenment and showed others the path to it and therefore deserves to reside in the center of universe (Press here to see basic concepts of Buddhism)

WAT MAHATHAT
Mahathat is the most important temple among the hundreds in Ayutthaya, and considered the center of the universe. As the center of faith it is located in the city center. Besides that it houses the relics of Buddha, Wat Mahathat was also the place where he resided as the Supreme Patriarch and the leader of the Buddhist monks.
This temple, built in 1374, originally used laterite, but was later restored with bricks.
The complex consists of over 200 Chedis, amongst which a large Prang was prominent. It collapsed 25 May 1904. 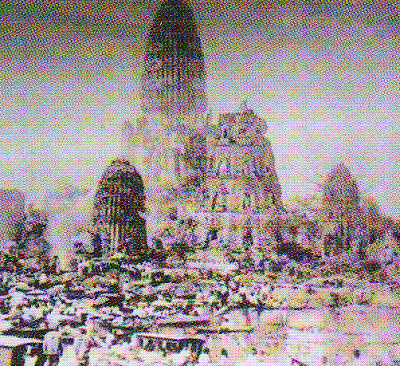 Old photo of Wat Mahathat before the main Prang collapsed.

It is believed that the temples were distributed so that the main building was located in the center and the Hall of ordinations and Viharn or Vihara (monastery) were symmetrically in front and behind the main building. 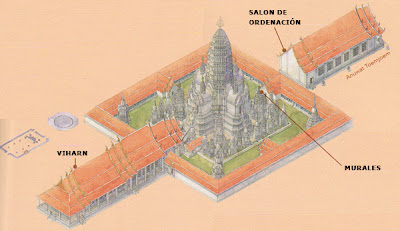 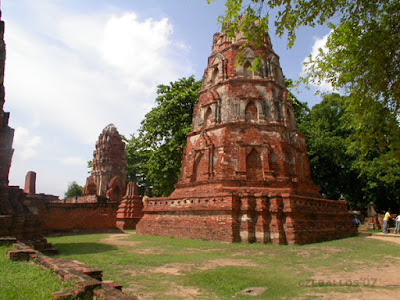 One interesting detail of the Wat is a Buddha head, which is embraced by a tree, as if Nature would envelope him and claim him for itself. This head is currently the subject of much veneration. 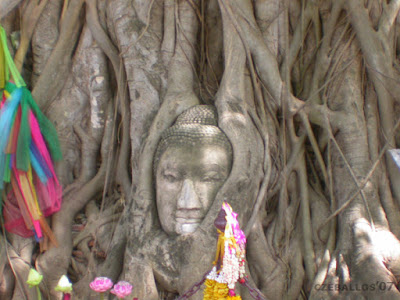 It was the administrative center of the city and consisted of a set of buildings and gardens.
Each area was divided by fortifications. 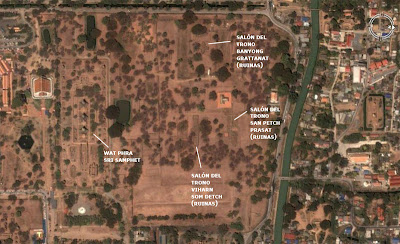 Distribution of the ruins of the Royal Palace
Image Google Earth

In the center, several throne halls were located, as the monarch resided in the innermost area. In the outer part, the offices of the government could be found.

These halls, in specific, the San Petch Prasat Hall, shows a Thai like style, ie. sloping ceilings and profuse decoration. It was used for reception of foreign dignitaries and acts of coronation. 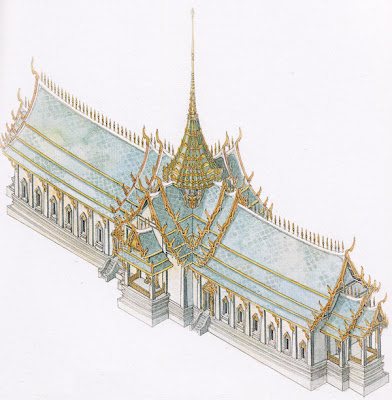 The royal temple was located in the outermost part.

Wat Phra Sri Sanpeth was originally constructed in 1448 as a private chapel for the king, but was renovated in the sixteenth and seventeenth centuries.

It was a temple located in the administrative center of the Palais Royal. No monks resided in this temple. It solely housed a Buddha image covered in gold.

When the Burmese invaded the town, they tried to melt the gold, but ended up burning both the statue and the temple. Today a replica of the statue can be seen. 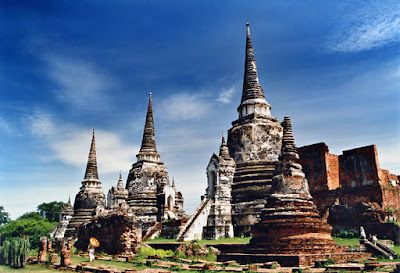 The three Chedis that compose this temple are believed to house the ashes of three important kings, likewise the relics of Buddha. The small buildings facing the Chedis served as location for small ceremonies.

The Chaiwatthanaram Wat temple is the one that impressed me the most in Ayutthaya. 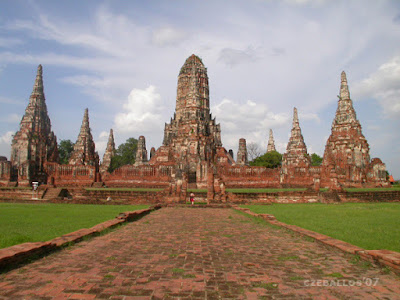 It was built in 1630 and is believed to have been constructed by King Prasatthong to commemorate the victory over its neighbor Cambodia. Interestingly, its architecture is similar to that of Angkor Wat in Cambodia. The distribution of the buildings was carefully planned, according to Buddhist cosmology. 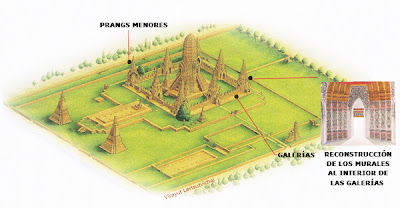 Its main prang is of monumental scale. It is a structure that reaches a height of 35 m and is believed to symbolize Mount Meru. It is surrounded by minor Prangs and galleries, symbolizing cosmic mountains and oceans. More than 100 statues of Buddha, most of them beheaded, are kept in the main Prang. 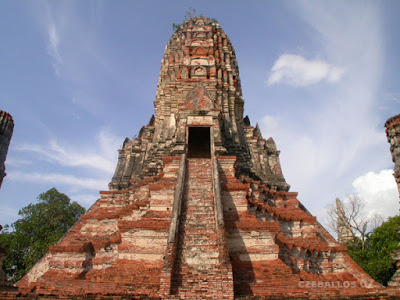 The ruins of the ancient capital today build the Historical Park of Ayutthaya, which was recognized as World Heritage by the UNESCO in 1991.

On October 2011 the Ayutthaya area was affected by the worst flooding in decades in Thailand. I hope everything goes well soon for these kind people and for their invaluable heritage. 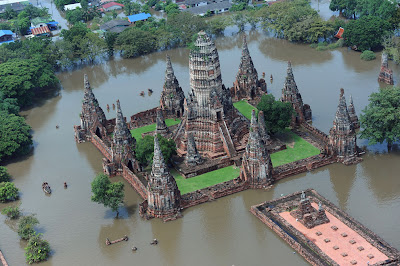 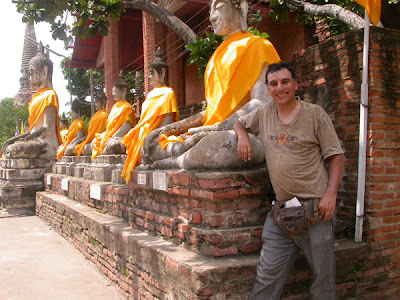 Posted by Carlos Zeballos at 9:49 PM