Located in British Columbia, Vancouver is a Canadian city overlooking the Pacific. It is a relatively young city, located on the banks of the Fraser River and the foothills of rugged, wooded mountains. A multicultural metropolis, it accommodates a significant immigrant population from Asia, and its economic growth is reflected in the high value of its properties. 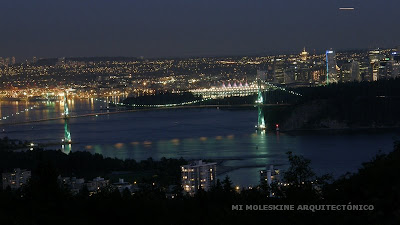 Vancouver is hosting the 2010 Winter Olympics. One of the main sports venues for this event is the speed skating Richmond Olympic Oval, in the neighboring city of Richmond. Located across the Fraser River, this scenario will be subsequently used as a recreational facility at any time of year, promoting social interaction in the community and will be a catalyst for economic development in the area. 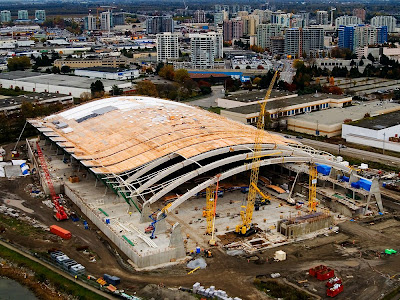 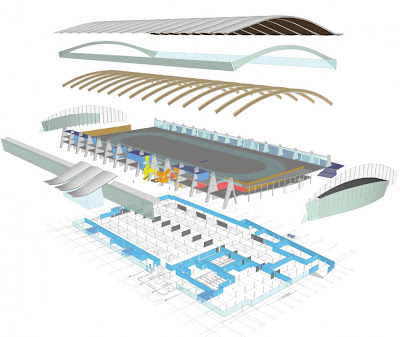 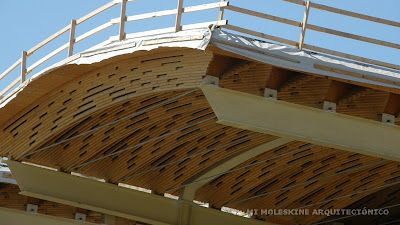 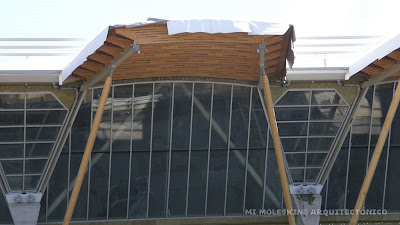 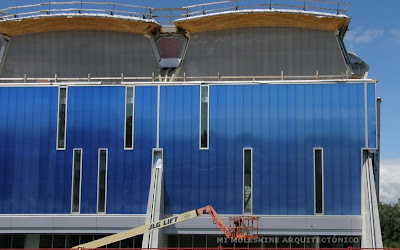 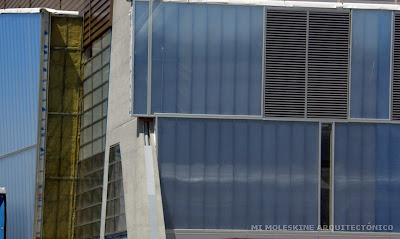 The Oval during construction

The building was started in 2006 and completed in 2009. The project was designed by the Canadian architect Bob Johnston from Cannon Design who, inspired by the fluidity of the Fraser River, conceived its proposal based on 3 concepts: 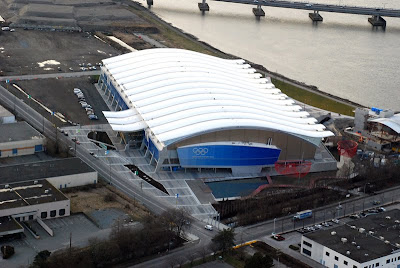 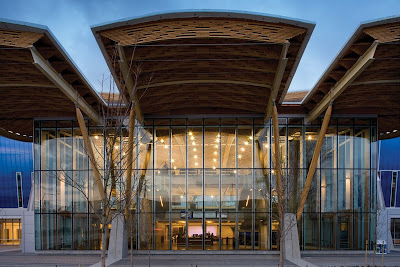 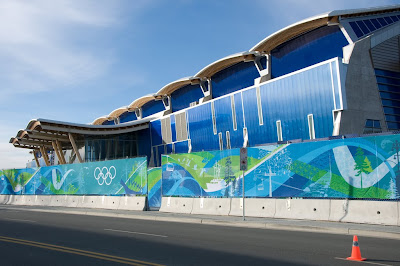 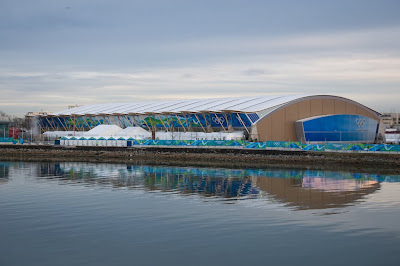 • Flow: in three major types (laminar, transitional and turbulent surface), is the idea that summarizes the many activities and buildings on the site. The interior and exterior site celebrates our existence in the daily and seasonal cycles of the sun, water, earth and wind. Here we found the strict order of the city meeting the natural environment of the the riverfront.

• Flight: represents the highest embodiment of human spirit and our aspirations for the development of mind and body. For the speed skater, hard years of rigorous training end up in the turbulence of the Olympic event. For the community it provides an opportunity to enrich the daily routine by coming to an oasis, an environment devoted to the potential of the human body.

• Fusion of the physical elements of flow and the spiritual elements of flight. The estuary, just like Canada, is both diverse and interconnected, fluid and elemental, powerful and quiet. 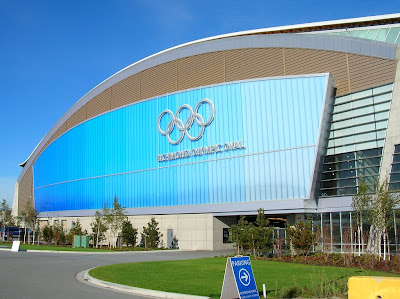 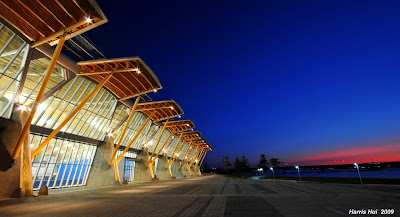 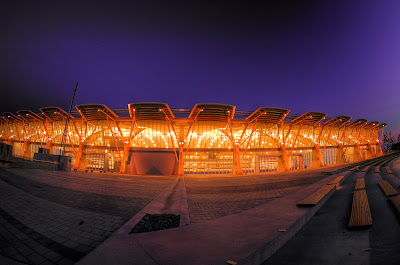 Photo courtesy of Lightfight8r
The oval hosts a 400 meters ice ring, with an approximate capacity of 8,000 spectators. On the main level activities can be developed simultaneously in ice, wood and stone floor. 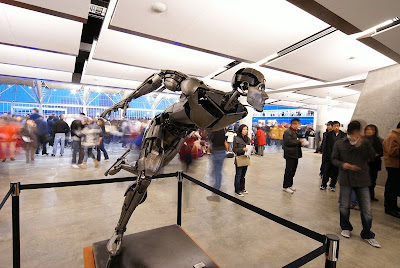 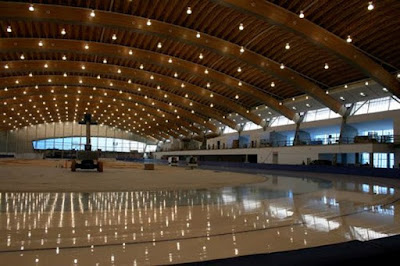 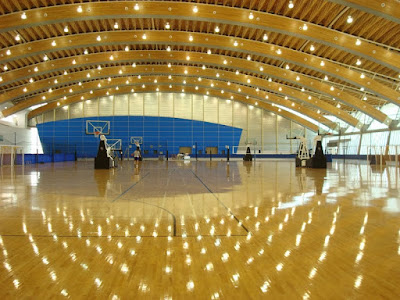 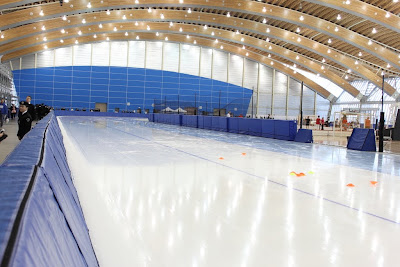 The corrugated panels are fitted in V-shaped achieving structural and acoustic integrity, as well as a very interesting visual effect of rippling waves. 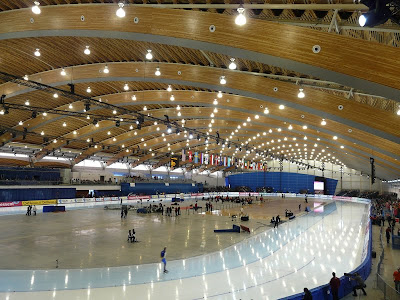 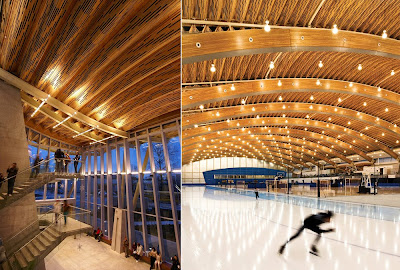 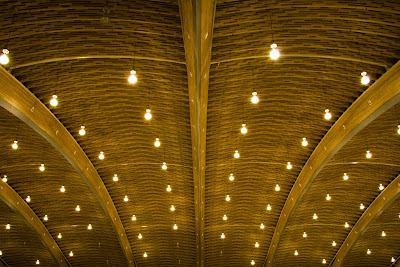 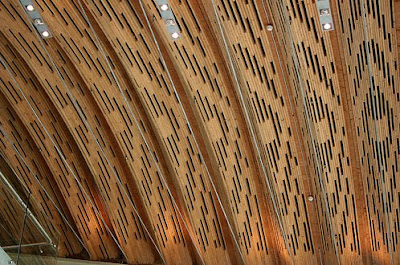 
In the following video, my good friend Santiago Diaz explains the process of design for the Richmond Oval's roof, using Autodesk Inventor. 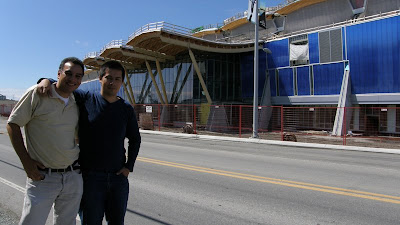 Together with Santiago Diaz, Peruvian architect who works at the company that developed the modules for the wood ceiling.
Posted by Carlos Zeballos at 2:32 PM