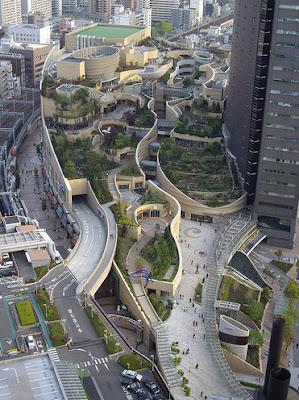 Osaka is a city of malls. Hundreds of malls and galleries crisscross the frenzied urban fabric, like delirious arteries taking the pulse of the city's accelerated heartbeat. However, something that called the attention of my Westernized eyes was Osaka's lack of public spaces such as parks and squares, especially around commercial areas. It is understandable. The land in this area has a very high opportunity cost, and therefore instead of trees, multi million-dollar buildings are preferred to grow.


That's why Namba Parks is an important effort to give back some environmental quality to the city, without losing the opportunity to offer commercial spaces in a highly speculative area. 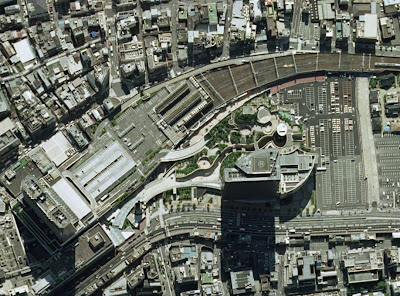 Namba Parks was designed by Jon A. Jerde ,an American architect, professor at UCLA and author of several publications. Jerde has several urban interventions in the U.S., characterized by its spectacular facades. In Japan, aside of Namba Parks he has also designed another mall in Fukuoka, that we will discussed in a future post.

The construction was executed by the company Mori Building Co. Beside the complex there is a huge, disproportionate and tasteless tower, which has nothing to do with the design of the park. 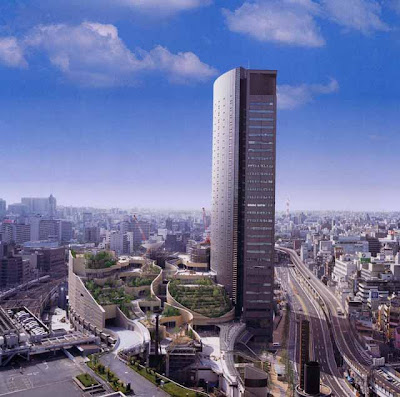 
Therefore, I will mainly focus in the landscaped area. Namba Parks is a combination of 3 elements: a mall, a park, and a circulation space flowing through it. The mall resembles the idea of a small town. The shops are connected by bridges or face lively mini squares, enabling visitors to experience the space in a human scale, a kind of commercial promenade in heart of the city. 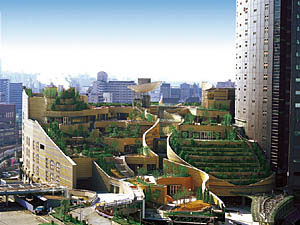 The park is developed on terraces on the roof of the shops, evoking the shape of the gardens of Babylon. From afar, the park rises showing its hanging gardens as an irresistible attraction to a town thirsty of greenery.

Its design is not rational at all, because of the undulating geometry of the park reflects the subtle route in traditional Japanese gardens, incorporating some Western elements, such as benches and fountains. A cascade of terraces offers both public and more private spaces, using techniques such as subtle changes in the texture of the floor, unevenness in the lawn or the incorporation of a particular type of tree. 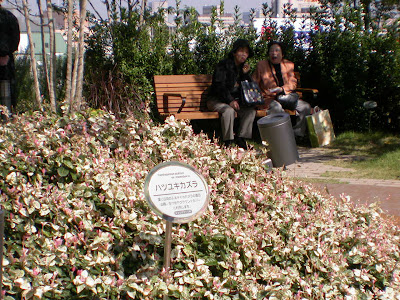 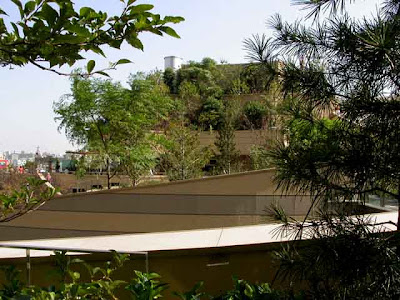 The third concept is what makes this complex unique: the metaphore of the Grand Canyon as a topic in the circulation of the building. Of course, one could criticize: what is the Grand Canyon doing in Japan??? Its validity remains controversial. After all, since the Meiji period in 1868, the Japanese have continued to copy things from the West (and in some cases improving them, such as cameras or cars). In their insular culture is allowed to take out concepts from outside and adapt them to their own cosmogony. 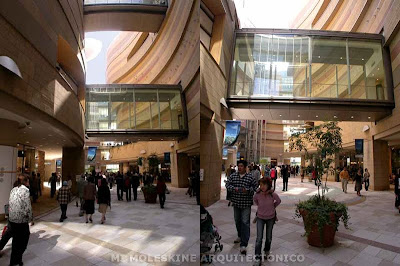 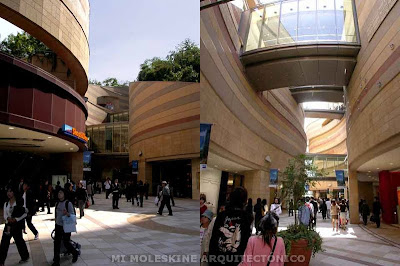 I will not argue further on that matter, I will say however that, fortunately the concept is not a mere caricature of the Grand Canyon (a sort of Disneyland), but evolves into an elaborated stylization of forms and colors, based on the ellipse and the elliptical arc.

It is precisely that by participating in its route, the crowds flows resembling the Colorado River, rejoicing in the various sensations that the variety of its scale and the surprising display of elements such as waterfalls and bridges along its way. 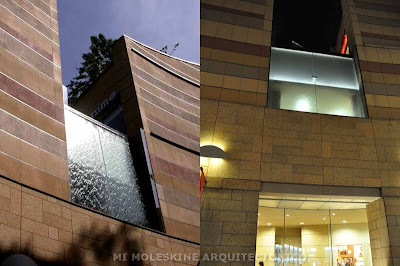 Detail of a waterfall.

The design of their striking sculptural facades resemble the formations of the great geological American natural wonder. 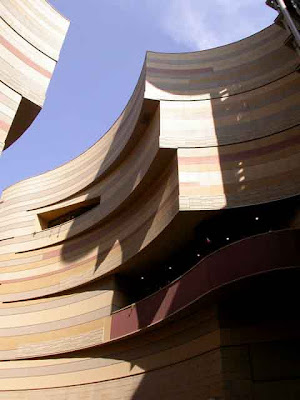 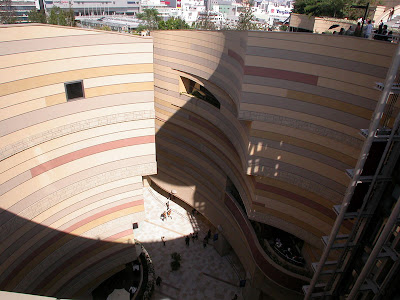 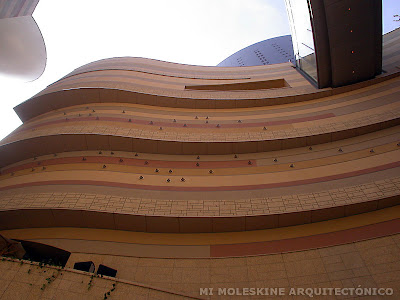 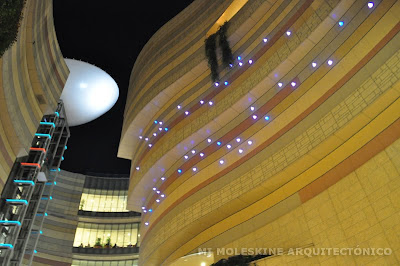 The execution of the details has been carefully carried out, taking into account different colors, textures and materials. 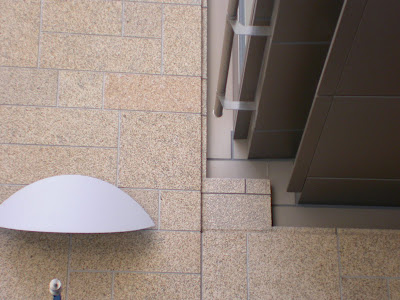 At the core of the promenade lies the ellipse that generates the entire geometrical layout, where panoramic lifts are located, capped by an sculptural ovoid tank. 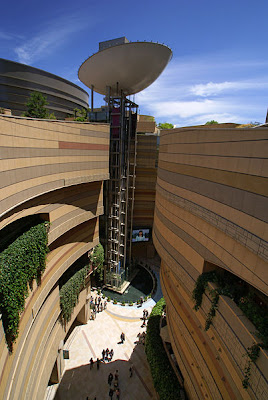 This dish, just as a lighthouse, has a central role in the nights of Namba Parks. 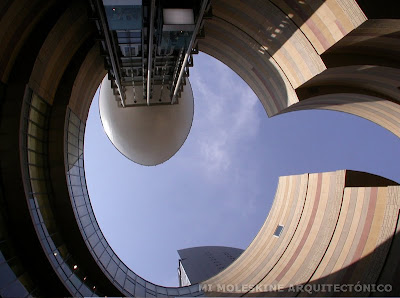 The theme of the ellipse is always present, from the big squares up in the treatment of floors. Ellipses or elliptical arcs are the geometrical base of Jerde's design. 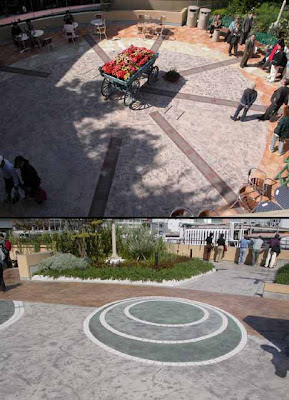 This urban intervention is definitely welcomed, from the environmental viewpoint. Thermo photographs show the impact on the temperature of the area. Because of the trees, the amount of humidity is higher, as extreme heat or cold are controlled naturally. Environmental pollution has also been significantly reduced, providing a more comfortable and healthy microclimate to the Namba district.


The landscaping of the park is also a remarkable achievement, since the massive foliage is seen at its best in the cascading terraces, even more than if the trees were grouped on the same level. 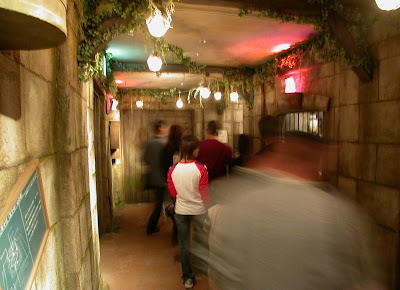 If they have copied the Grand Canyon, why not copy the Incas? Busy restaurant whose decor resembles Inca ruins on the top floor of Namba Parks. 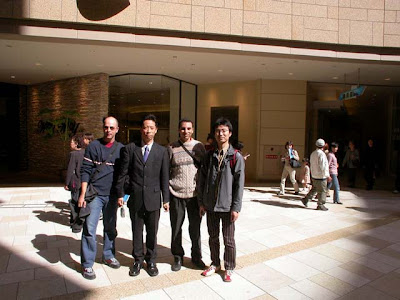 From left to right, Architect Gilad Ronnen from Israel, Prof. Masashi Kawasaki, me and Prof. Demura, right after Namba Parks was inaugurated.
Posted by Carlos Zeballos at 10:28 PM