CENTRE FOR INTERACTIVE RESEARCH ON SUSTAINABILITY AND REGENERATIVE DESIGN 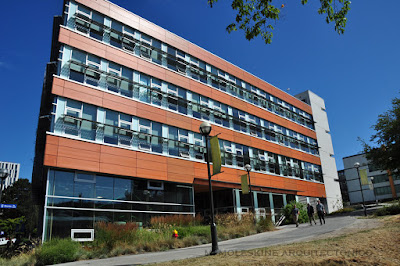 Most of the so-called sustainable or "green" buildings try to reduce their impact on the environment, both in its construction and maintenance. In simple words, it is about a building being "less bad", assuming that its existence would inevitably imply a negative environmental balance.
The concept of "Regenerative Design" takes a proactive approach and go beyond the traditional practice of sustainable design. The regenerative buildings not only reduce their energy consumption to zero but they collect, generate and distribute renewable resources to their surroundings, improving the environmental balance of the environment. 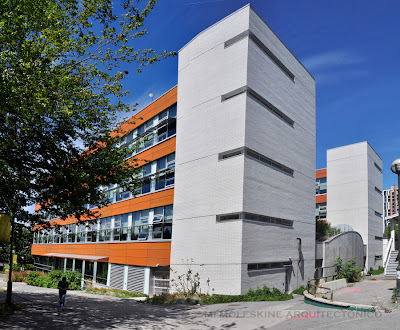 A remarkable example of this approach is the Centre for Interactive Research on Sustainability or CIRS, erected at the University of British Columbia UBC in Vancouver, Canada, a project by Perkins + Will. 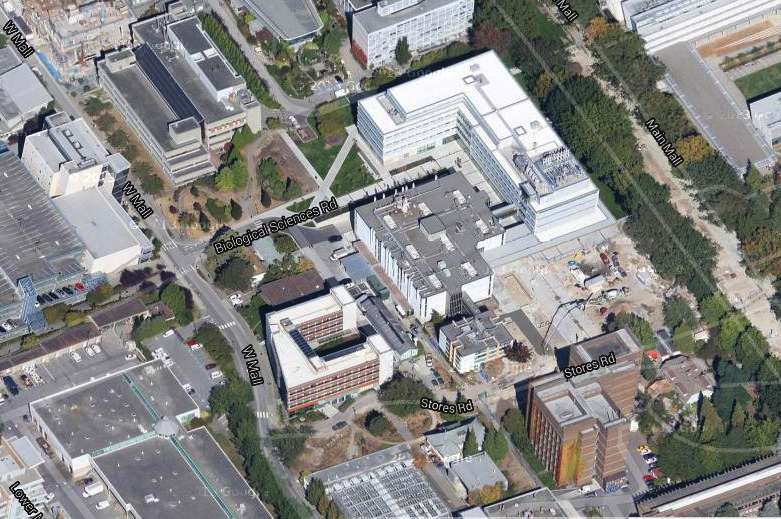 The building statistics are impressive. For example, neither structural steel nor concrete were used during its construction, greatly reducing its environmental footprint. The total amount of water consumed by the building is collected from rainfall and all wastewater is recycled on site. 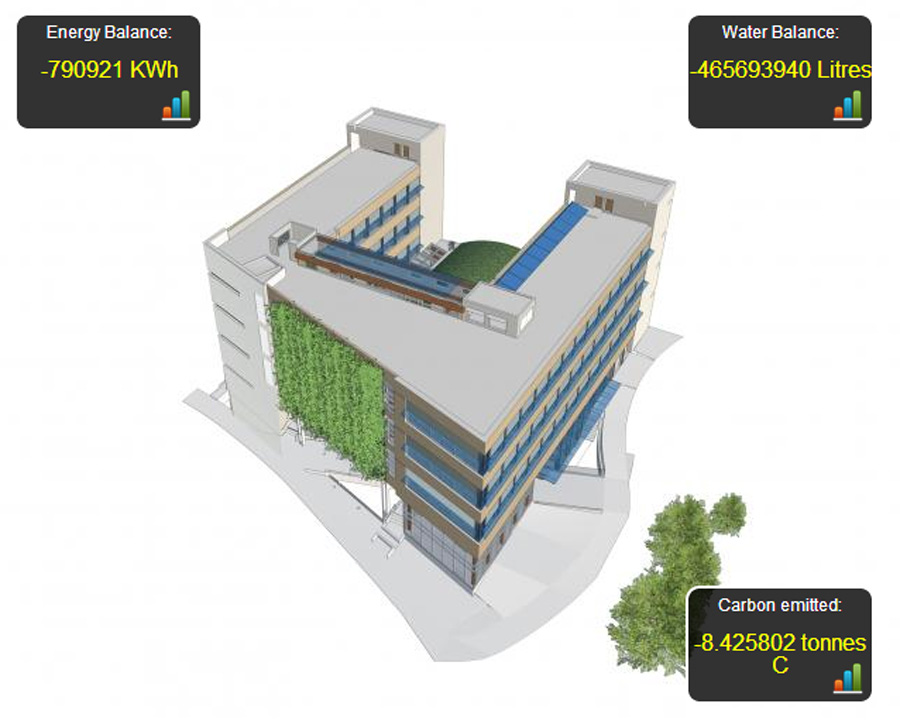 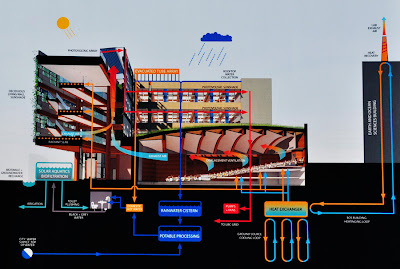 The main strategy to achieve a design with positive CO2 balance was the widespread use of wood, in particular a type of pine that, after being attacked by a beetle, suffers scars that make it unattractive to fine finishes or construction. Due to the climate change these beetles, which used to die in the cold weather, have managed to adapt and have experienced a population explosion, causing the death of vast quantities of pines, which wood  is usually rejected by the industry. This wood has been used both in the structure, finishes and furnishings of the CIRS, and provides an atmosphere of warmth throughout the building. 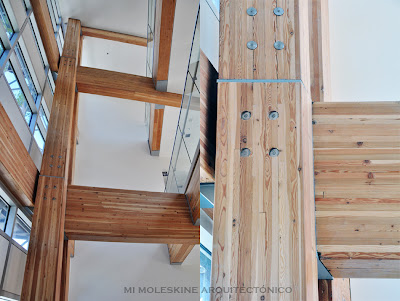 Wood is the most sustainable construction material, because it is a quickly renewable resource. From a structural point of view, the modern engineered materials such as glue-laminated timber have increased the hardness of wood so that they have a much greater structural capacity. 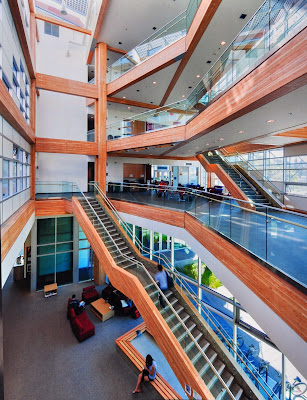 However, the abundant use of wood creates a fire hazard. In order to minimize it special insulators were created as well as  a sprinkler system, which is supplied from an underground cistern, which in turn collects rainwater. 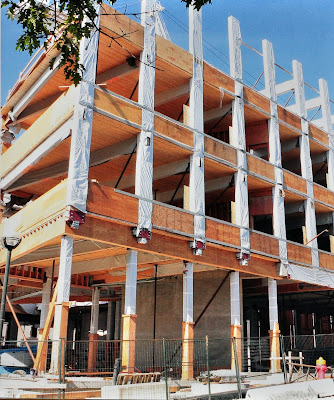 The façade accomodates a set of panels that support seasonal vegetation called the "living wall",  which provides shade in the summer and allows the passage of solar heat in the winter. 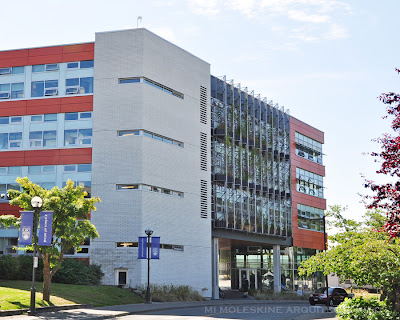 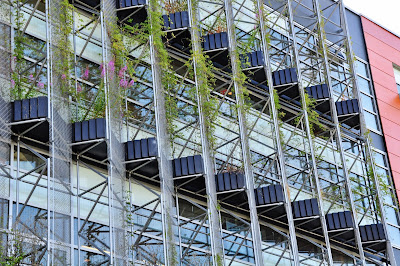 The garden is drip-irrigated using storm water and ultimately it ends in a groundwater aquifer. 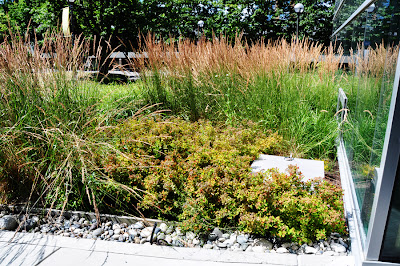 The building is crossed diagonally by a path which includes the way of a pre-existing old road. 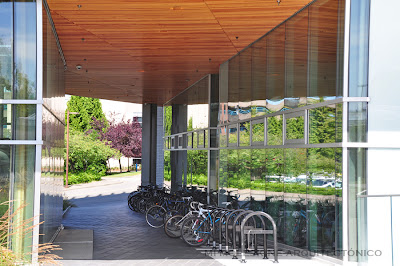 This allows to separate the glass corner like a glass triangle, which gives lightness to the composition of the building and houses an interesting solar water biofilter. This consists of a series of tanks with plants which naturally absorb and process the waterwaste generated in the bathrooms of the building. The processed water is used to irrigate both the living wall as well as the inner garden. 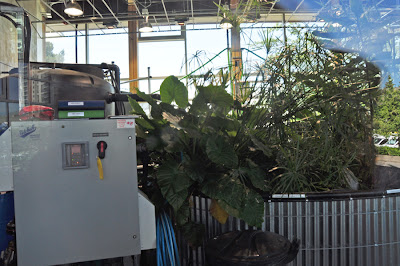 Another notable element on the facade are the photovoltaic panels on the east and south facades which cover part of the building's energy demand. The rest is collected from the excess energy of a nearby building and converted into energy in a small geothermal plant. 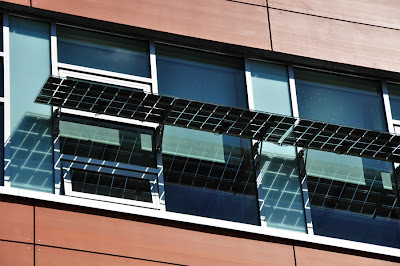 Inside, the building is organized around a large atrium, which provides generous natural lighting, while allowing natural ventilation without the need for air conditioning systems, using the chimney effect to  help circulate the air by convection. In turn, it exploits the building orientation to optimize its exposure to light. 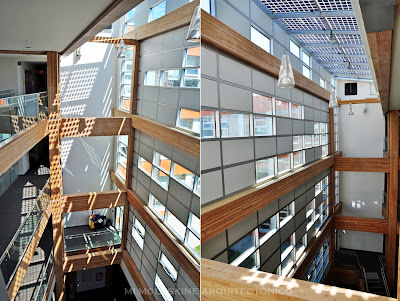 On the ground floor there is an auditorium with capacity for 423 people, naturally lit by a lateral skylight located next to the indoor garden (in fact the garden is located over the roof of the auditorium). 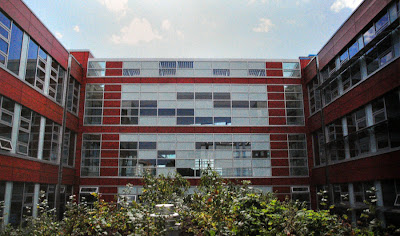 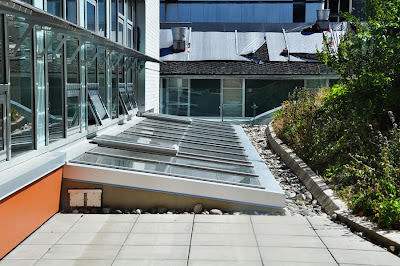 The auditorium also used wood both in the structural beams and the finishes, as well as in some of the furniture. 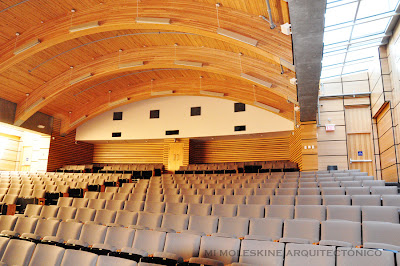 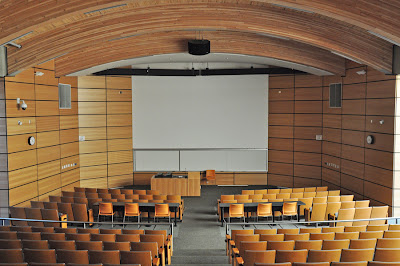 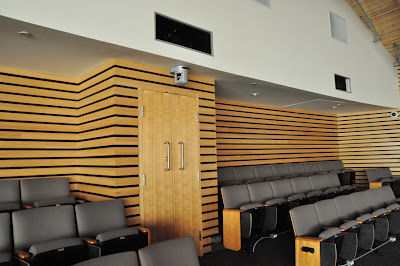 If you look closely you can see the scars left by the beetles while they were burrowing the pine wood. 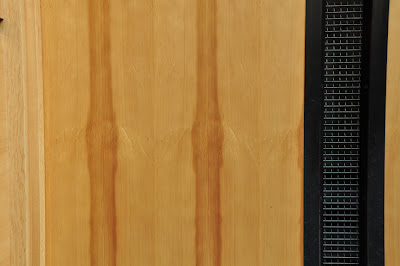 Due these features, the CIRS is recognized as one of the most innovative buildings in North America. In addition to its quality as an experimental regenerative building, is a facility that promotes the study and dissemination of new ideas for sustainable design. 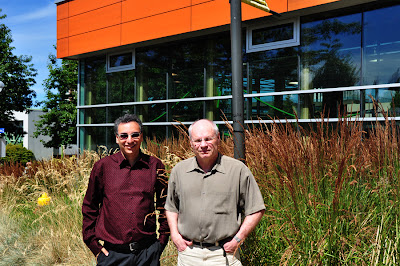 With Professor Ronald Kellett, who kindly showed me around the building, explaining a lot of the information that I have included in this post

Posted by Carlos Zeballos at 4:47 PM