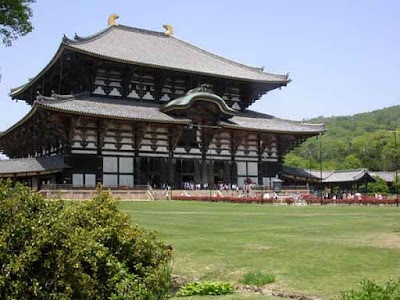 ESPAÑOL
Before the eighth century AD, the capitals in Japan were temporary settlements that used to be were transferred after the death of the emperor. After Buddhism was introduced to Japan and as a sign of the power of Yamato clan, the first major was founded in 710capital under the name of Heijo-kyou (the castle-capital of Peace) by Emperor Shomu, until in 794, when it was moved to Kyoto. Heijo-kyo, which was founded in the likeness of the Chinese capital of Ch'ang , occuping an area of 5.9 km from east to west and 4.8 km from south to north, and hosted a number of important buildings for the court and religious elite. 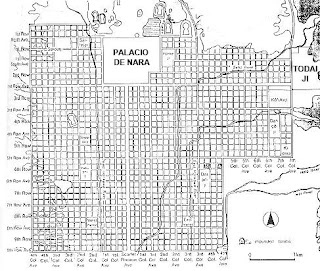 Layout of the ancient capital Heijo-kyou
That city, now called Nara (200.000 inhabitants), is a small but pleasant town, with parks and temples, surrounded by forested mountains and crossed by two rivers.
Its most famous treasure is the Todai-ji, the Great Temple of the East, which is the world's largest single wooden roof structure, that houses the largest statue of Buddha made of bronze in the planet. 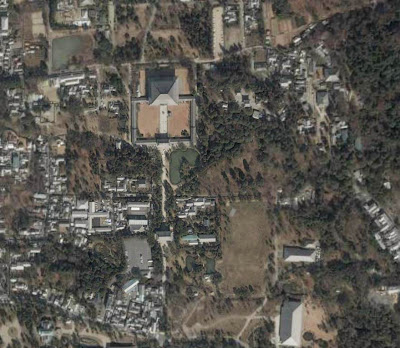 
Before arriving at the Todai-ji, we went through a large park populated by deer. Legend says that many deities traveled mounted on white deer, so these animals are revered as divine messengers and bearers of good luck. 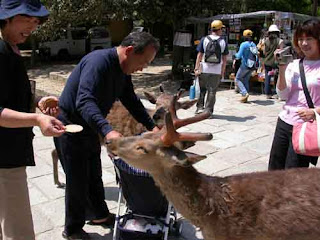 The Todai-ji is placed, according to Feng Shui or Chinese geomancy, north of the complex. The complex, begun in 745 by Emperor Shomu, consists of several structures. 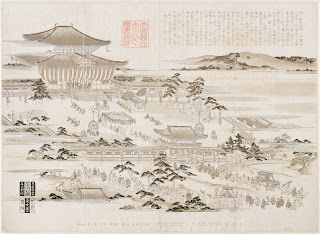 This majestic portico, 20 m high, dates from 1199 and is used to enter the compound, separating it from the worldly life. It leads to a processional access to a courtyard, which used to receivethousands of pilgrims and Buddhist monks. The original porch was made in Indian style, and this 2/3 version of the original dates from 962, after the original was partially destroyed by a typhoon. 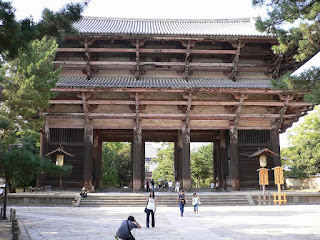 I've always found fascinating the way these huge wooden structures are assembled in a building system which is as effective as intricate. The technique, imported from China, has evolved with differences depending on the time and place where it was applied, but mantaining the samebasic essence.
In the case of the Nandai mon, the 6 x 3 columns structure rests on stone bases, without foundation. These piles are joint through a mesh of wooden beams. The eaves system is based on pieces of wood that are assembled like a puzzle, allowing the roof to be separated from the structure by several meters. It also allows the corners to achieve a slight curvature, characteristic of pagodas, especially in China.
The following video shows an animation of this construction system.

Naidaimon or Great South Gate.
Animation Carlos Zeballos
After passing through the portico, we found the Kairo, a road which is in also the symmetry axis of the complex. To the right of the Kairo is a pond, as it was customary to place a pond south of the temples.

Aligned to the Kairo is the mon Chuu, the central portal which precedes a more private domain of the temple. On each side of this gate, there are large wooden figures representing the kings of protecting the temple, as it was in the case of the Nandai-mon. 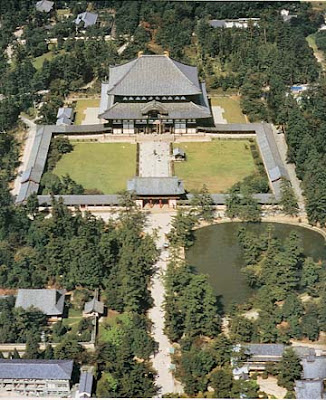 Aerial view of the Todai-ji

Between the Central Gate and the temple itself, aligned with the Kairo, there is a large octagonal, almost 5 meters high lantern, that was made of bronze in 752, with engravings representing divine beings such as lions and playing musical instruments. 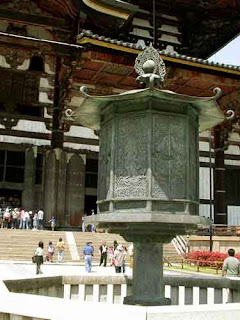 In the middle of the courtyard stands the imposing main temple, the Daibutsuden. This huge wooden structure (56 * 50 * 50 m) houses the statue of Buddha. 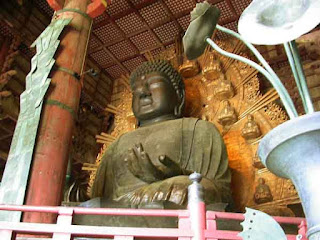 The huge image is 15 m high (the tallest indoor Buddha statue in the world) and it was originally covered with gold by Emperor Shomu. Unfortunately, fires, earthquakes and other disasters removed the golden layer, also damaging parts of the original structure. 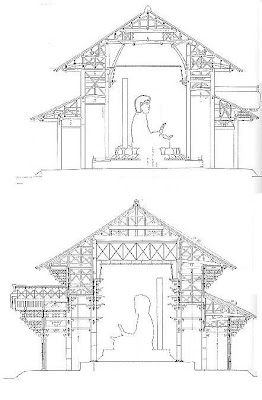 The statue sits in a mudra position, with his right hand raised, which means he has the power to grant wishes. The hand is so big that five monks can stand on it. Accompanying the Buddha, there are huge images of other deities and protector kings .
In the back of the temple one of the columns contains a hole about 50 cm. which is about the same size of the nostril of a statue of Buddha. The Japanese believe that if one is able to cross the column through that hole, he/she has a guaranteed place in heaven of Buddha, and for that reason many people try to pass across it. It is not uncommon to see someone trapped in the middle of the column, getting aid by some generous volunteers who would try to pull you out (as it was my case). At least I am saved from hell... 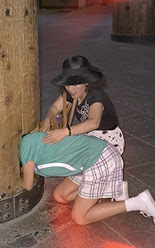 Leaving the Daibutsuden, is the spire that used to crowned an ancient pagoda, showing close a delicate work of art that is meant to be seen only by the gods. 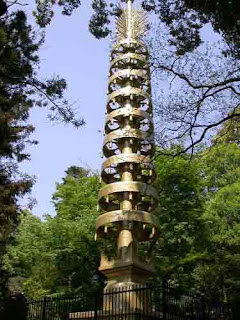 Nearby, in a temple called Shoru, is one of Japan's oldest bells, cast in bronze. The great bell of nearly 5 m (which unlike the West is tolled by a large bamboo on the side) produces a deep sound and can be heard from great distances. 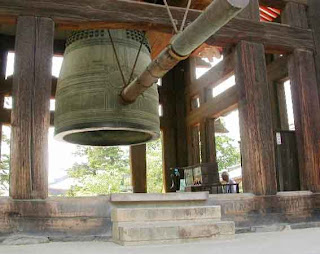 The important historical legacy of this ancient capital, considered a UNESCO World Heritage Site, can be seen in many other areas in Nara, which I hope to comment on other future occasions. Until then. 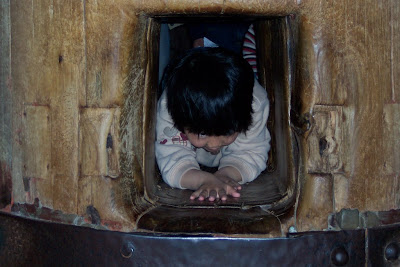 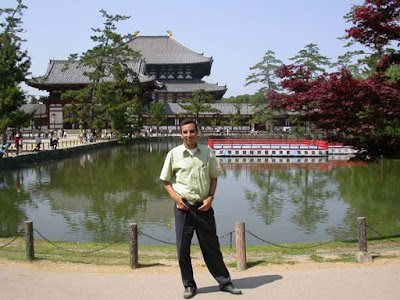 Posted by Carlos Zeballos at 8:48 PM