LOCSIN: THE MODERN FORM IN THE PHILIPPINES 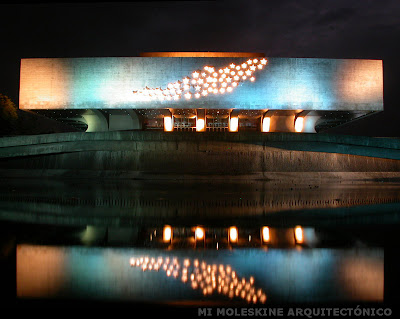 Cultural Center of the Philippines, with its Christmas decorations


Leandro V. Locsin (1928-1994) was the most important modern architect of the Philippines, the equivalent in that country of what Kenzo Tange was in Japan. Aside of being an architect, Locsin was an interior designer, artist and musician, and in 1990 was entitled as National Artist of the Philippines by the recently defunct President Corazon Aquino, in addition to receiving the Asian Culture Award in Fukuoka.

I could only visit little of his extensive work, but I was impressed by his skill in the use of concrete and the cleanliness and strength of the volumes, which appear to be levitating while, at the same time, providing a sense of massiveness and lightness to his buildings. Many more advanced studies, however, have analyzed the important link between the work of Locsin and the traditional Filipino architecture. 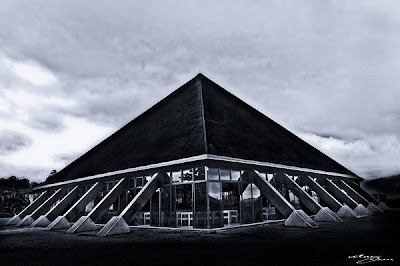 
In this entry will present two of his most representative works.

CHURCH OF THE HOLY SACRIFICE 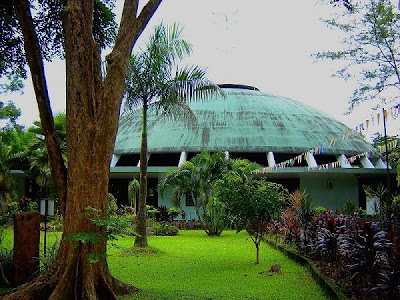 Locsin's first work in 1955, was a church (ironically, his last work was also a chapel, located in Malaybalay shown above), the church of the Holy Sacrifice, at the University of the Philippines, Manila (although originally designed for the Victorias Milling Co. in Negros Occidental,  Locsin's home town). 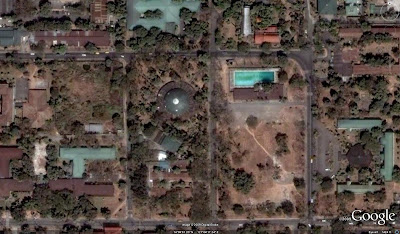 Church of the Holy Sacrifice. See location in Google Maps.

It is a circular church, the first of its kind in the Philippines. The altar is in the middle of the floor, an idea which Locsin corrected in later churches, since it was not very appropriate to the rite of the Catholic mass. 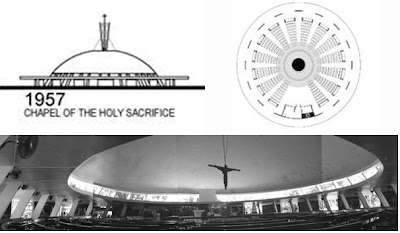 
The main feature in the church is a large concrete dome, located on transparent walls and supported on pillars on the sides of the church, that people have dubbed the "flying saucer", somehow emphasizing the lightness of the form. 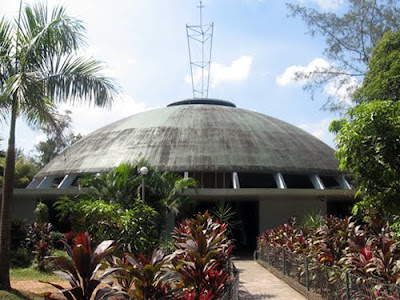 Some researchers have emphasized the parallel between this conception and the pre Hispanic architecture in the Philippines, especially in the bahay kubo, houses with sloping thatched roofs and light walls erected on wooden poles. 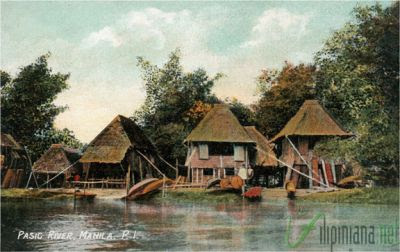 The dome is slightly separated from the inclined columns, emphasizing the sensation of floating and allowing more light to interior, which is complemented by a circular skylight at the top of the dome. 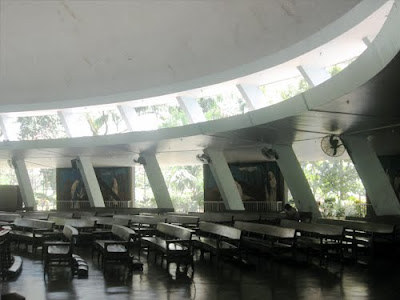 The architect Caryn Paredes-Santillan, presented at the II International Conference on Architecture and Phenomenology, a study of the manifestations of liminality in the churches of Locsin. Liminality is a concept used in semiotics to define an intermediate state between two areas, often characterized by its ambiguity and its complementarity with two spaces.


Paredes-Santillan distinguishes in her analysis of several churches by Locsin, three types of space: the primary spaces (main functions of the building, like the altar), secondary spaces (auxiliary areas, such as the  baptistery, choir, confessional) and liminal spaces, connecting these two kinds, which are "psychological barriers that delineate the different degrees of integration within a space and serve as a rite of passage between the exterior and interior." 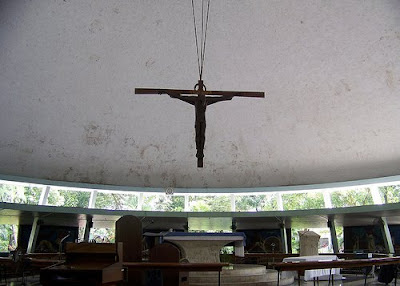 To this end Locsin uses some techniques as surrounding a space by another space, the separation of the roofs and the use of light. 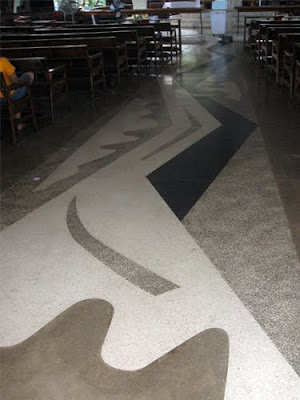 Aside of Locsin, the design of the church had the assistance of other leading professionals, the floor was designed by Arturo Luz, the Stations of the Cross by Vicente Manansala and Ang Kiukok, and the double crucifix and the base of the altar by Napoleon Abueva, all now recognized as National Artists. 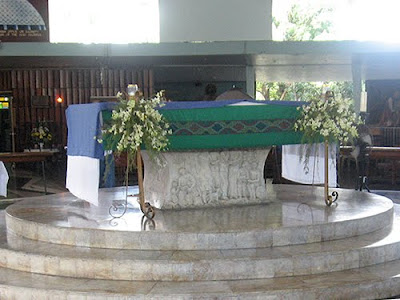 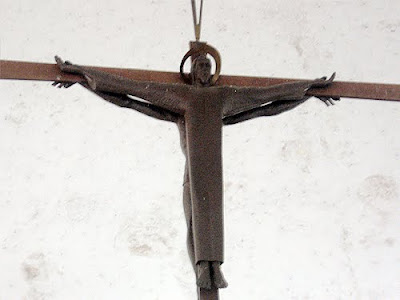 CULTURAL CENTER OF THE PHILIPPINES 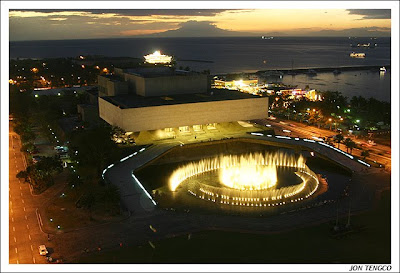 The CCP or Sentrong Pangkultura ng Pilipinas is the most recognized work by Locsin, completed in 1969 during the government of Ferdinand Marcos. In fact, his work focused mainly on the Performing Arts Theatre. 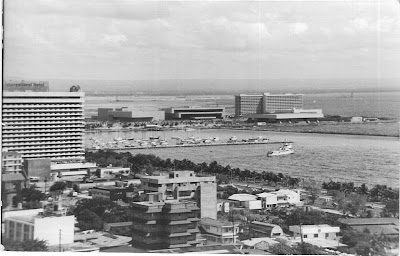 Old view of Manila Bay, with the CCP at the background.

The CCP is located on the waterfront, in an area of 77 hectares reclaimed to Manila Bay. During my visit a project to recover the riverfront was undertaken, which had been abandoned for decades and was being converted into an interesting center of social exchange. The CCP is the starting point of this long boulevard. 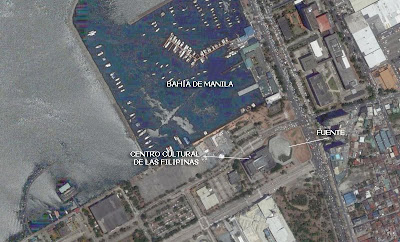 The idea was to make this complex the artistic Mecca of Asia, and for that purpose it houses four theaters, a museum of ethnography, galleries and a library of art and culture. 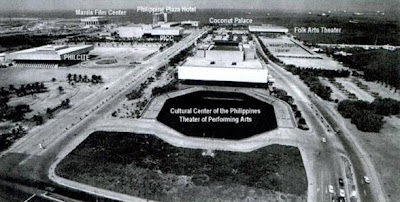 The main theater is comprised of a huge concrete block covered in marble that forms the facade of the building and protrudes 12 meters thanks to the powerful arched columns that give the impression that this block is floating. 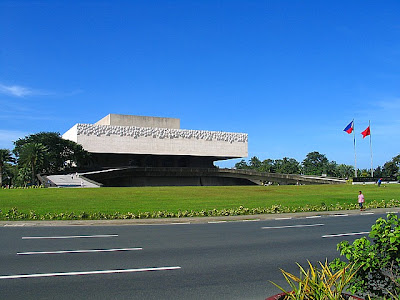 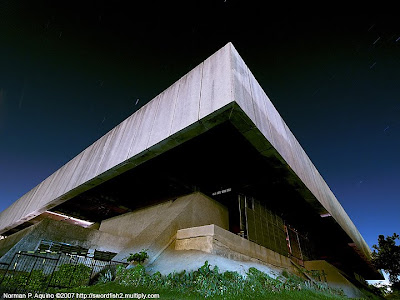 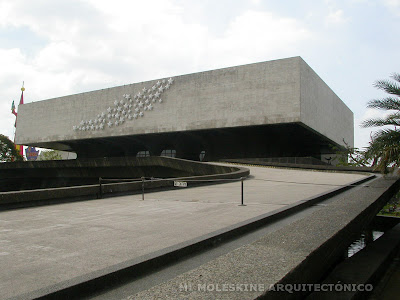 The building is accessed from two ramps which converge at the center of the facade, an idea that has been used by Locsin in some of his works. 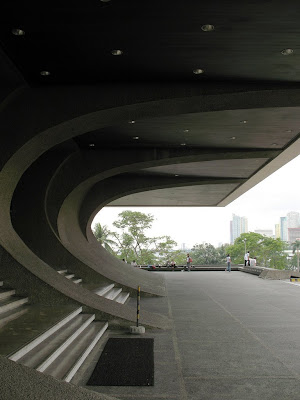 Fountains were placed in front of the block, which allows an interesting perception of the building at night.

Gerard Lico, in his book "Power, Myth and Marcos State Architecture" has criticized the monumentality of this complex as a waste, whose primary purpose was to serve as propaganda and demonstrate the power of the dictator. Similarly, many  Latin American dictatorships at that time, also chose grandiose works to signify their power and the vision of the nation, so that Marcos probably used this monument as a mask to hide the corruption problems that afflicted its mandate. 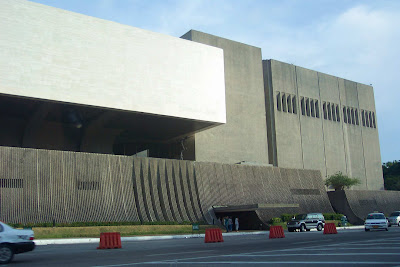 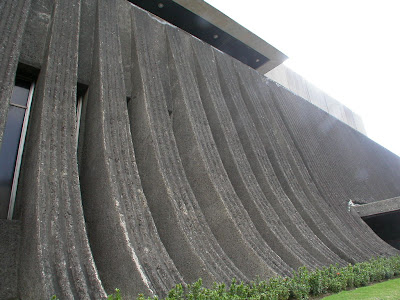 While many people worship him in Ilocos Norte (I had the opportunity to see his embalmed body, but he looked to me  like a wax statue), but there are many others who blame the huge external debt that his government left, as well as his many eccentricities that Filipinos still have to pay. After all, after the war, the U.S. plan was to turn the Philippines into Asia's new leader, instead of Japan. What happened? 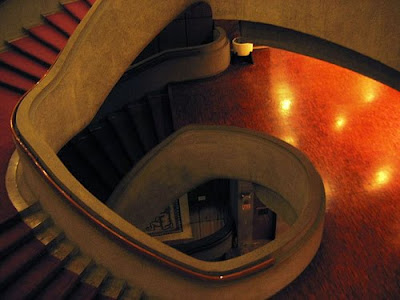 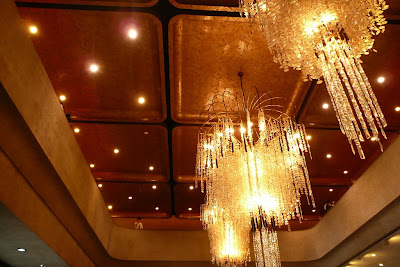 Interior of the building. Detail of the ceiling, courtesy of elzhear 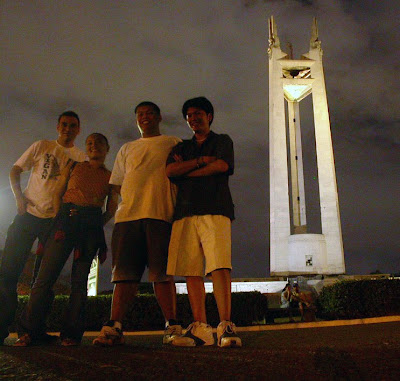 Thank you very much to the Visaya cousins for being such excellent hosts in Manila ... maraming salamat!
(This tower in our back is often depictedin Filipino films as a spacecraft)
Posted by Carlos Zeballos at 9:33 PM