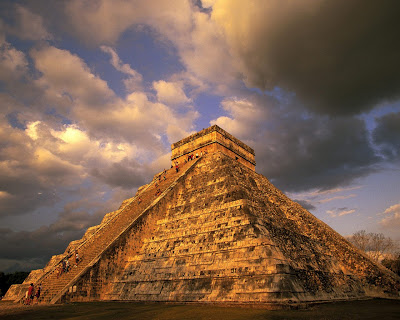 For many years I had wanted to visit Chichen Itza, the spectacular Mayan city located in the forest of the Yucatan peninsula, east of Mexico, long before it was chosen as one of the 7 wonders or that it became fashionable in the tabloids due to an apocalyptic interpretation of the "prophecies" Maya. 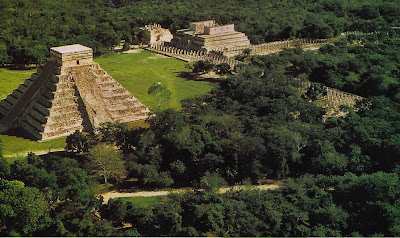 Here, we need to use our imagination to picture an impressive citadel, full of colorful monuments whose volumes, painted in ocher, tuquoise, green, orange, white and black, stood stunningly against the blue sky. Like their ancestors of Teotihuacan, the Mayans in Chichen Itza combined architecture with rich and colorful sculptures, evident in the detail of a profuse relief sculpture that represents snakes and other divine creatures. 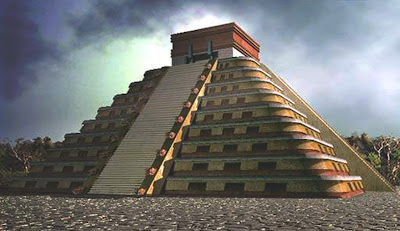 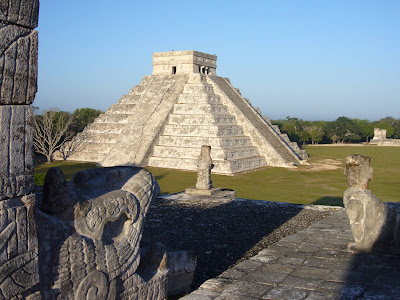 The city of Chichen Itza was huge and covered an area of ​​24 square kilometers with about 400 stone buildings distributed in 46 groups, that were built over the centuries. While it is not necessary to use the imagination to know the features of its inhabitants, as their descendants walk throughout the complex as craft vendors, it is necessary to imagine their numbers: more than 100,000 inhabitants ( only 10 cities in the world had that population 1000 years ago). 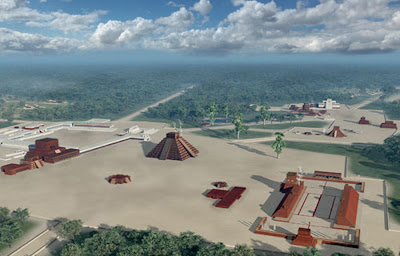 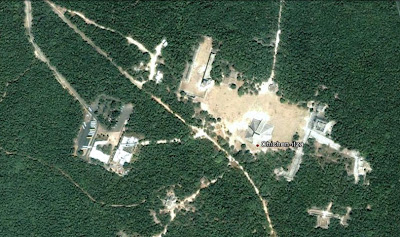 Regarding the urban landscape, I asked our guide how accurate was Mel Gibson's Apocalypto and he replied: "It is out of time, the Mayans were in decline when the Spanish arrived and they did not go to capture prisoners. Aside of that, the representation is quite realistic. " 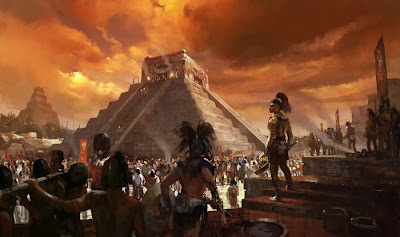 However, the area that we see today corresponds to a ritual zone and it was encircled by a wall, which means that generally  it could only be accessed by prominent authorities. At night, this area must have become a wonderful spectacle, when the pyramids were illuminated by hundreds of torches, as it is evidenced by the traces of oil found in the pyramids.

The pyramids were made of limestone joined with a cement made of burnt lime, crushed and mixed with water, and they were often built on top of  previous structures. Excavations confirm that the Kukulcan pyramid stands over three ancient structures, which allowed it to reach a height of 24 meters to the top platform. To these are added the 6 meters of the temple on its peak, reaching a total of 30 m. 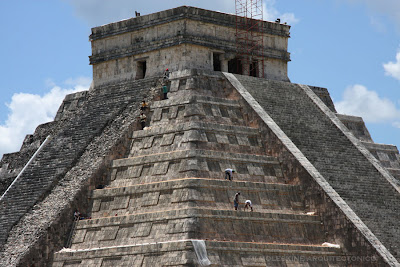 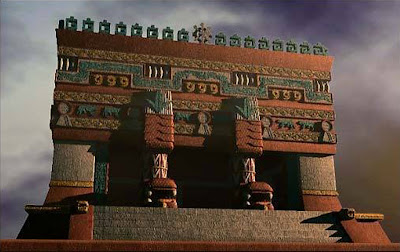 Each of the sides of the base measures 55 m, making it smaller than the Pyramid of the Sun at Teotihuacan . 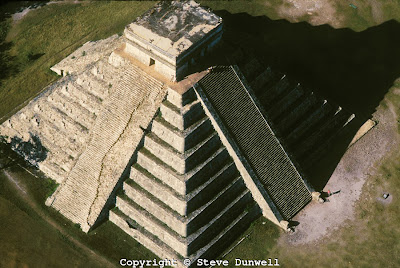 Besides its size and elaborate artistic quality, Chichen Itza is an outstanding example of astronomical knowledge applied to architecture. A detail in the Kukulcan Pyramid, also called "the Castle," are the two serpents that flank the central staircase. 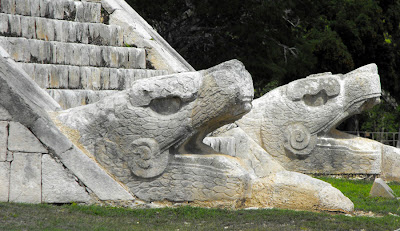 Well, in December 21st, during the winter solstice (yes, the day when "the world ends") the stairs of the pyramid produce a shadow in the shape of a snake and that, starting from the head form the body of the magic reptile, thus uniting heaven and earth. The detailed Mayan calendars also allowed them to understand the cycles of the stars and eclipses, and used that information to govern, control and impress people. 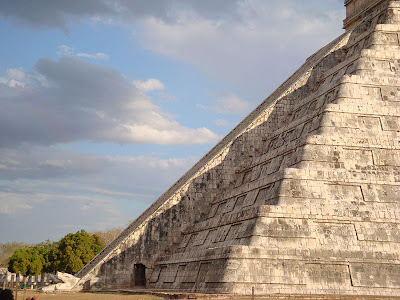 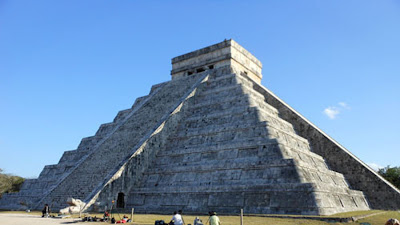 Another impressive aspect in this urban space is the acoustics. The sound was thoroughly studied, and allowed a person to clearly hear the speaker talking at the top of the pyramid. The following video   demonstrates the impressive effect obtained by  a single clap, whose sound was enhanced 10 to 12 times. Can you imagine the cry of a crowd?

The acoustic effect not only occurred in the pyramid, but also in the structure for the ball game. 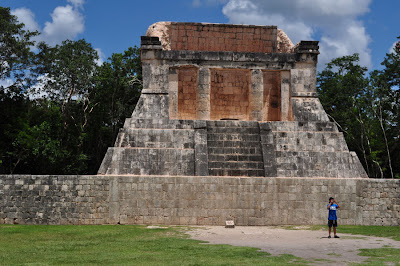 This was a solemn space, where a game similar to football was played (although it could play with shoulders, elbows and knees) bouncing a rubber ball between two teams of seven players. 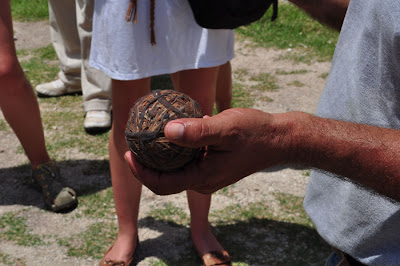 The game ended when the ball passed through one of the two rings especially carved in stone located at each side of this space. 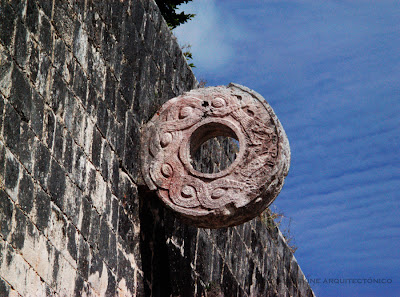 The game was a sacred ritual, and the losing team was sacrificed, as evidenced by the reliefs found on one side of the structure 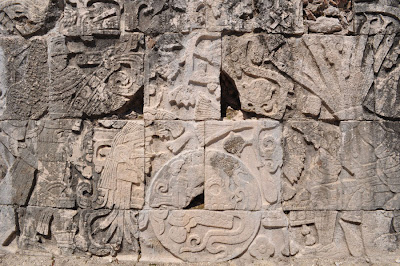 Besides the buildings, the complex contains a large well or cenote, vital for supplying water to the population and where, paradoxically, human sacrifices were offered during  times of drought. Because of them the city is named: Chi Cheen Itz a means "mouth of the well of water witches".

This brings up the huge environmental footprint that the city should have had, not only by the deforestation involving the city area itself, but by the large number of trees and water that was required in the construction process. This forest devastation was one of the causes of the decline of the Mayan civilization. Indeed, the city was abandoned already in the thirteenth century, three centuries before the arrival of the Spanish, due to environmental collapse and the brutality and cruelty of the ruling class, which was then a coalition formed by the Mayans and the Toltecs. The latter subjugated the Maya culture and exercised their power through human sacrifices to worship the sun, which according to them was fed only by the hearts of the sacrificed. For this reason many people fled to the jungle, accelerating the city's  process of collapse.
By the time Europeans arrived in this city, the jungle had claimed it for himself. 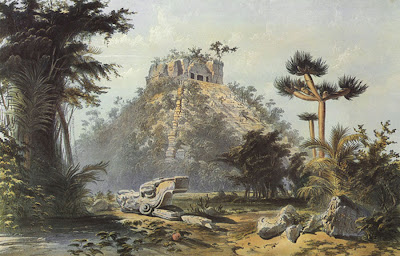 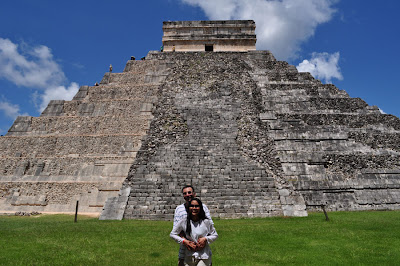 Posted by Carlos Zeballos at 10:31 AM