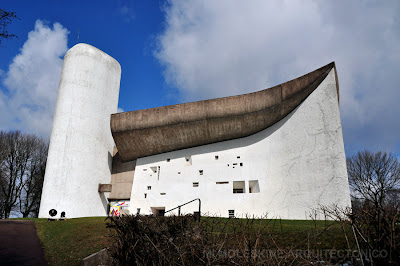 The chapel of Notre Dame du Haut, located in the small village of Ronchamp, near the French border with Switzerland, is the best-known work of Le Corbusier's, and one of the most emblematic masterpieces in modern architecture. 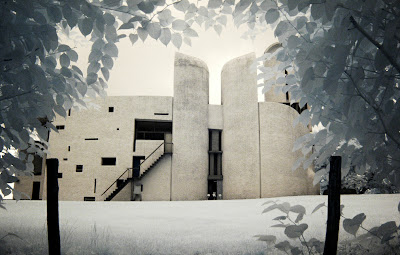 
Frank O. Gehry argues that the problem with the chapel at Ronchamp is that it is impossible to hold back tears while visiting it. I can not say I reached that point, but certainly the pilgrimage to this small chapel was an overwhelming experience for me, both by the building and its powerful presence in the landscape, the composition of the volumes and the sublime use of light, all of which Le Corbusier amalgamated brilliantly, as well as by the memories of numerous architectural conversations about the chapel held with teachers, colleagues and students through the years. 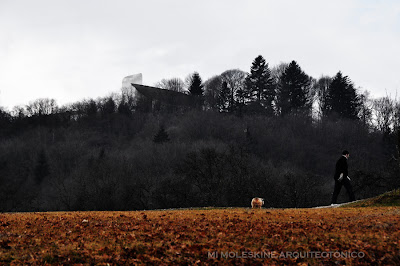 After spending several hours in the place and having a lot of material to share with you, it is impossible for me to summarize this experience in just one post, so the discussion about this work will be divided into three entries: the first deals with the chapel's historical background, location on the site and landscape as well as the  "urban" elements that constitute the complex in Ronchamp. The second post will be devoted to the chapel's architectural, formal and spatial features, as well as some of its remarkable details. These two entries will be accompanied by Geoffrey Baker's analysis from his brilliant book "Le Corbusier. Analysis of Form." (I apologize that the citations will not be literal, by my translation from a Spanish version of the book).
Finally, in a third post I will refer to the nearby expansion project undertaken by the Italian master Renzo Piano. 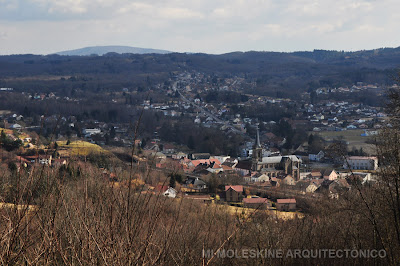 Ronchamp is a small village nestled in a gentle valley, connected by train to Belfort, near the French border with Switzerland and Germany. Its occupation dates back to millennia, in fact the name "Ronchamp" comes from "Roman Camp". 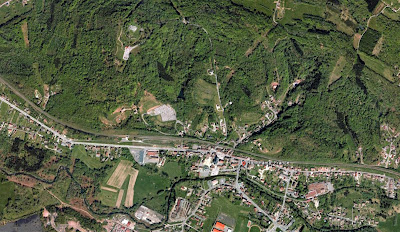 Then occupied by the Celts and a small population during the Middle Ages, the town prospered  due to a coal mine that operated from the mid eighteenth century (remains of this industry can be seen from the road leading to the chapel). 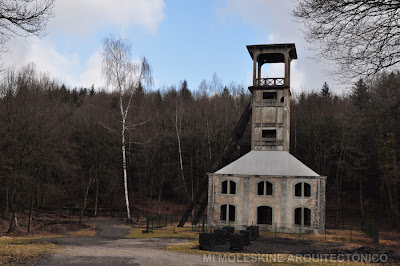 Opposite the village lies a wooded hill. From its summit, one enjoys an important visual domain of the surrounding landscape, flanked by the Jura Mountains and from which nearby towns can be glimpsed, such as Mouriere to the north and La Selle to northeast, as well as the cemetery and the village of Ronchamp to the southeast. 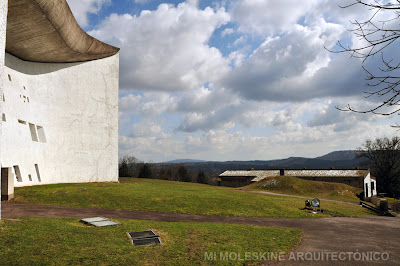 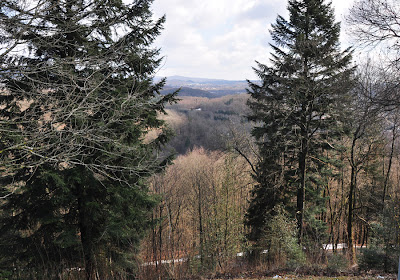 "The idea was born in the brain, then wandered and grew indefinitely. I carefully drew the four cardinal points from the hill. As there are only four: to the east, Ballons d'Alsace; to the south, the cliffs; to the west, the plain of the Saône and to the north, a small valley and a village ... Day 4 June 1950. " 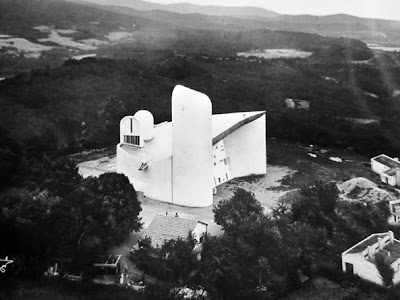 "The hill is crowned with a plain, which is accessed by a road that rises from the southeast; a group of trees enclose the site to the west and partially delimits the plain on the east side. 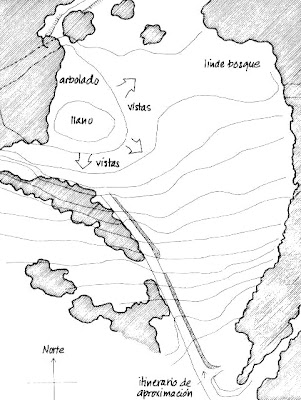 The open space extends in a southeasterly direction, downhill,  up to the eastern boundary coinciding with the trees. Within this context, in the middle of a wooded and hilly terrain, the small plain is significantly closer to the western margin of the field with a view of the surroundings, but especially towards the south. "
Geoffrey Baker

LOCATION. A. "The access road comes from the southeast flanking the open space; the topography determined a slope to the southeast.
B. The site has an manifested obliquity . "

ZONING. C. "There is a state of confrontation circulation-building in the context of the obliquity of the site."
D. "Le Corbusier uses this obliquity to separate the entrance area of the assembly area."
Text and graphics: G. Baker.

Because of its visual properties, the hill have enjoyed a symbolic role for centuries. After the Roman occupation, a Celtic shrine to worship the sun was built at the top of the mountain. 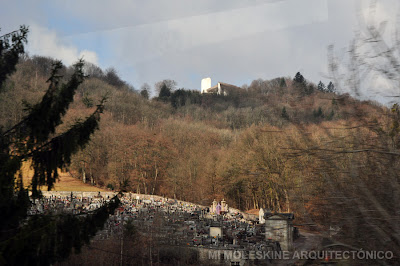 View of the chapel at the top of the hill and the cemetery on its side. This mountain has had a symbolic significance since ancient times.

Later, in the fifteenth century a chapel was erected, dedicated to the Virgin Mary, Our Lady of the Heights, or Notre Dame du Haut. In the mid nineteenth century a tower was added, anticipating a series of renovations to the chapel, which became an important regional center of pilgrimage.

Left: chapel before the mid-nineteenth century. Right: enlargement in 1857.


In 1913 a fire left only the walls standing. The chapel was rebuilt in 1923 and completely remodeled in 1930 in NeoGothic style. During World War II the church was bombed and completely destroyed.

Remodeling of 1930, before the bombing in the Second World War


Then the religious authorities opted to rebuild it in a contemporary architectural style, that would seek to convey an abstract sense of sacredness. It was so decided to give the commission to Le Corbusier in 1950 (not without opposition, as the Swiss architect was an agnostic). Le Corbusier himself was reluctant to accept the commission, but he was convinced after visiting the site.
THE COMPLEX

The complex is composed of several elements, leaded by the chapel, the esplanade, the residence of the monks, a memorial pyramid and bell tower.

The chapel is located eccentrically on top of the hill and is oriented east-west, nearly perpendicular to the access path. 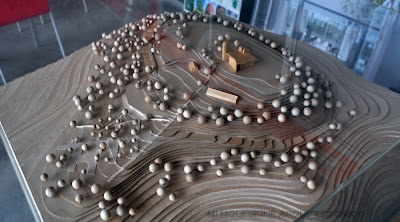 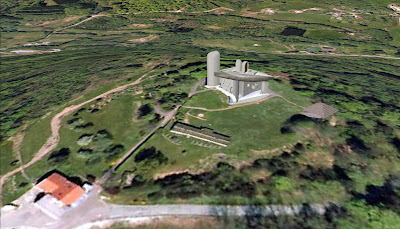 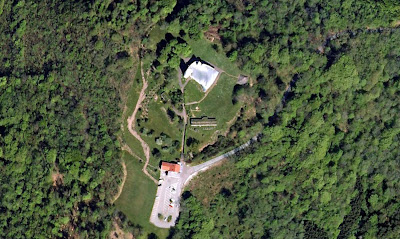 To the west is located a bell tower, a very simple composition, comprising a metal frame holding 3 bells. 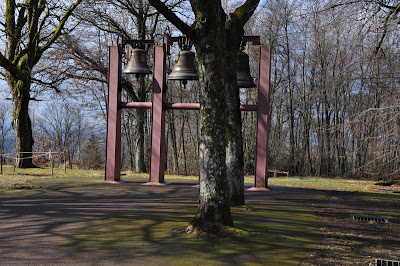 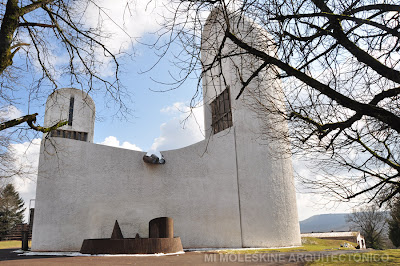 A view of the chapel from bell tower.

To the east is a large esplanade, facing an outdoor chapel, that allows celebrations in front of a large number of pilgrims. 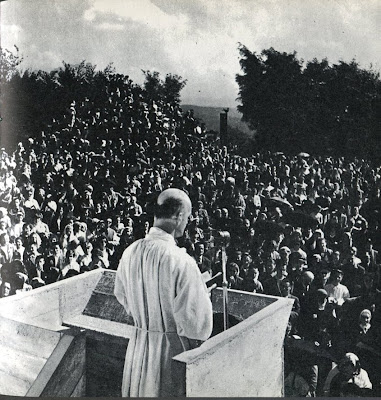 Le Corbusier had originally proposed an artificial slope arc in order to contain the space, but this was never implemented. 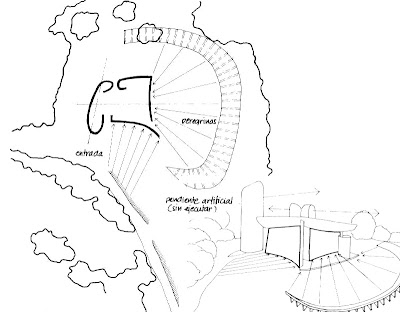 At the northern end a stepped pyramid is located, built with the remnants of the original church, which serves as a monument to peace. 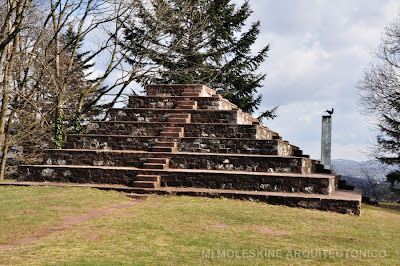 Towards the southern end, and a in a lower area of the topography, stands a rectangular volume made of concrete, that contrasts in both form and color with chapel. This volume, perpendicular and closer to the access path, contains the residence of the monks and was designed by Le Corbusier in 1953 and completed in 1959. The building, austere and sober, has classrooms, library, refectory, kitchen and cells for monks. 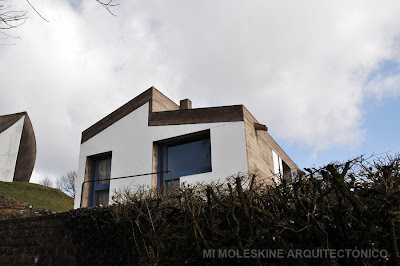 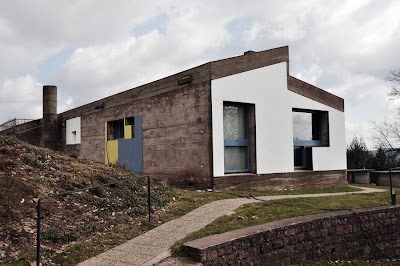 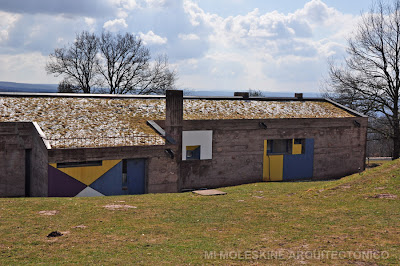 ARCHITECTURAL FEATURES OF THE CHAPEL

We discuss this issue in the next post. Until then. 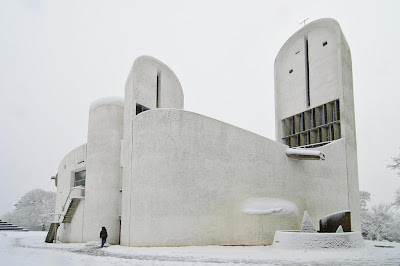 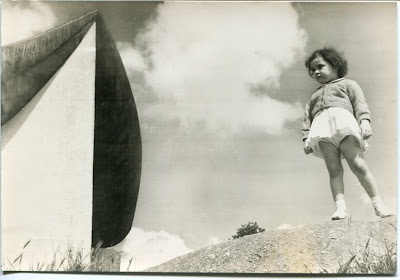 Posted by Carlos Zeballos at 1:54 AM