Close to the Imperial Forums stands Trajan's Market, a fine example of the aesthetic, functional and constructive Roman genius, particularly regarding the use of brick. The first "shopping mall" in history is located next to the Forum of Trajan, housing more than 150 stores at different levels and with terraces overlooking the forum. 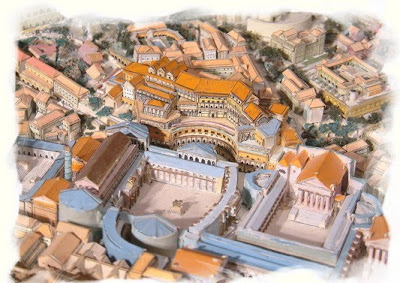 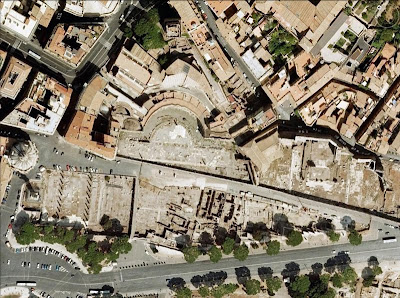 As we saw in a previous post, one of the functions that originated the Roman Forum was trade. Then, little by little the Imperial Forums were assuming the civic and memorial role, and therefore commerce was relegated to a few stores in the Basilica Emilia and Julia. 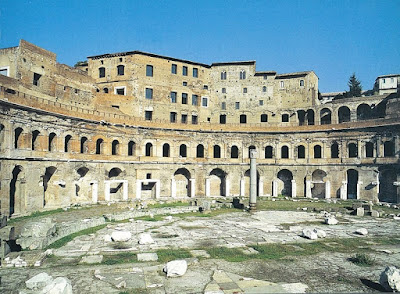 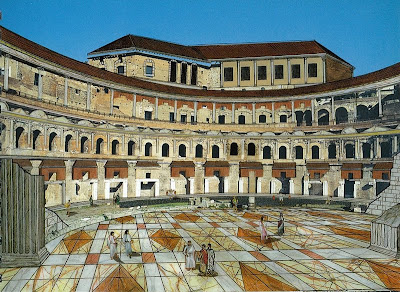 Trajan saw the need for a building that would specialize in the sale of products and decided to build it next to the majestic forum where he was revered as a deity. However, the lack of space available would require a major excavation on the slope of the Quirinal. 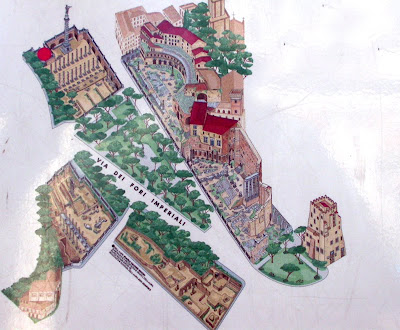 The project for the market was commissioned by the emperor to Apollodorus of Damascus, his favorite architect and partner in his military campaigns (when he was commissioned to build the bridges). This brilliant architect would also be responsible for the construction of the Trajan's Forum itself. The prestige of Apollodorus did not stop with the death of his friend the Emperor, and he would continue working with Adrian for the design and construction of the Pantheon (it is said that it was Adriano who had Apollodorus killed for contravening his ideas). 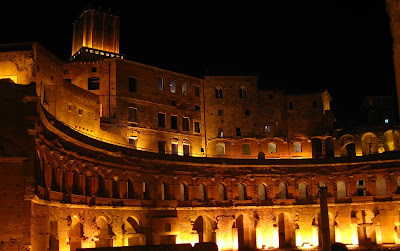 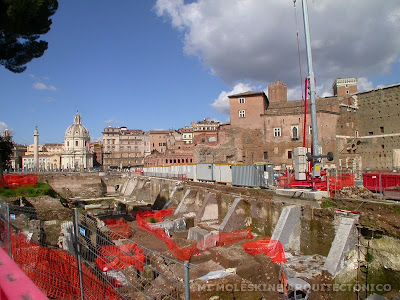 During our visit, excavations were being conducted in the Forum of Trajan. In the background, the market.
The market was built between 100 and 110 AD following a semicircular layout, responding to the shape of the Basilica Ulpia's exedra which stood in front. The complex was developed on six levels, linked by lateral stairs. 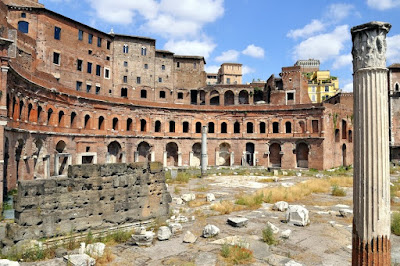 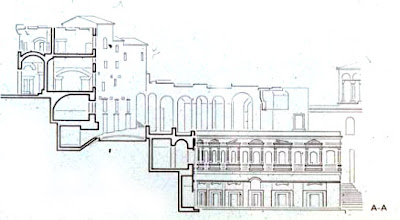 Cross-section
The three lower levels facing the forum, were used for the sale of food products in stands called tabernae.

It also comprised various zones, which meet specific functions. The following description is based on the official site of Trajan's Market .

a) Great Semi-Circle. b) Small Hemicycle. c) Forward Halls. d) Via Biberatica.
Images courtesy of Museums in Commune. Click on the image to enlarge.

It was the area that was closer to the Forum of Trajan, so that the masonry and decoration were carefully worked.
As previously said, its semicircular shape echoes the layout of the exedra that stood in front, but it also had a structural purpose, as it better contained the load of the hill.
As the building was ascending in height, the rooms were going deeper into the hillside. 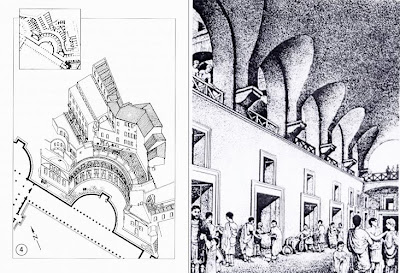 Eleven small rooms with vaults are located at the first level. Frescoes can be seen in the walls and black and white tiles covered the floor.
The second level has a semicircular corridor covered by a barrel vault, with windows to the facade.
The third floor has a service corridor open to the Biberatica street and an internal mezzanine. 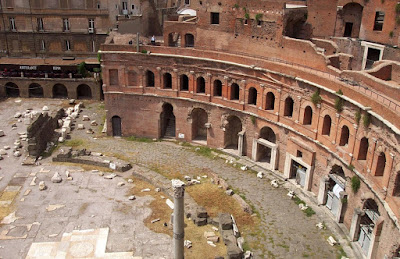 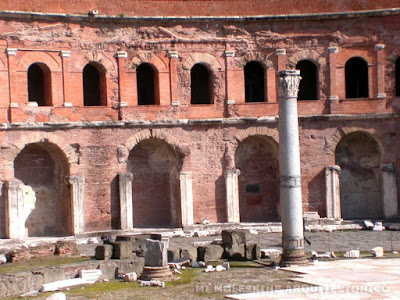 Two halls of flat facade, covered by a dome split in half. Both originally had a central door, but now one of them the door is walled up.

It is a street paved with basalt, which connected both lower and higher sections of the complex and follows the semicircular shape of the urban layout.
At the end of the road stands an arch that is also the south buttress of the Central Body. 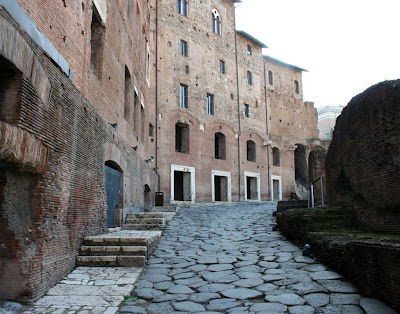 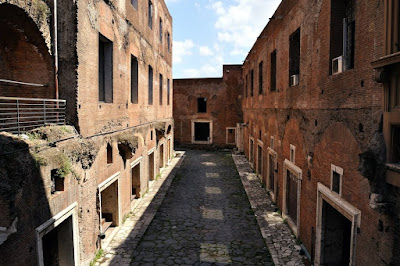 The upper floors were used for offices, the Great Hall and the Central Body.

It has three floors with tabernae open to the via Biberatica.
On the first floor plant the spaces are irregular, and culminate in a room covered by a semi semicircular dome. Notice that this floor is semi buried at the same level of the Via Biberatica.
The second floor has a room in the form of apse and some decorated rooms of irregular shape.
The third level repeats the distribution of the rooms, but with less ornamentation.

This large space (32 x 8 m) is flanked by vaulted rooms on three levels.
On the first floor these areas bordered the hall, while in the second floor they were opened up onto corridors with pilasters. On the west side (valley), the first level rooms were adjacent to the via Bibarática. On the eastern side (Monte), a third level with interconnected areas, was accessible from the staircase serving the upper floors. 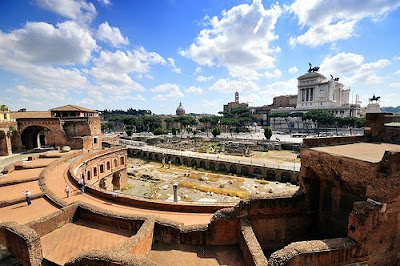 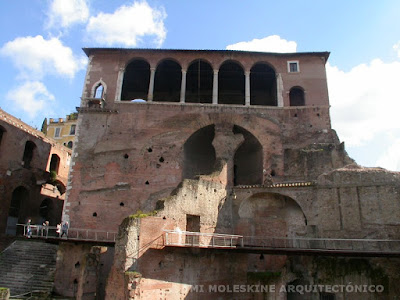 Located upon the Central Corps and the Great Hall is a road paved with slabs of basalt. La Torre delle Milizie was the result of several buildings constructed between the twelfth and thirteenth centuries. Between 1150-1200, a palace with a loggia on arches reused Roman structures, between 1200-1250 a corner of the loggia was occupied by a high tower, which from 1250-1275 was covered by the brick wall, that we see today. 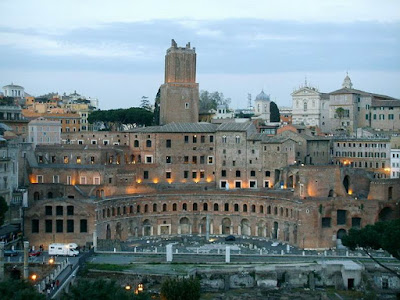 CONSTRUCTION
The most outstanding feature of the market is that for the first time is that brick was used on a large scale. This method was fast and resistant and for that purpose a unique construction technique was chosen. Bricks were divided in half diagonally and then were arranged in two rows. In the middle, a mortar invented by the Romans was poured, the concrete, a mix of cement and gravel. 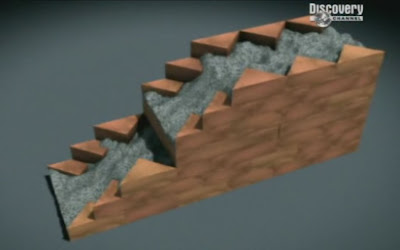 But the extraordinary ability of the Romans in the use of brick goes beyond its structural use, but also as an aesthetic element, using different styles for the arrangement of the masonry in the decoration of the facade. 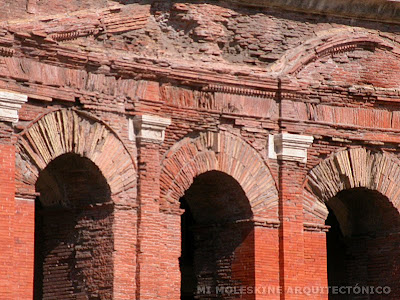 TRAJAN'S MARKET AFTER THE EMPIRE

Following the collapse of the empire, the market was inhabited and fortified. Between the twelfth and fourteenth centuries the Castle of the Militia was built here, from which still survives the Torre delle Millizie, built in 1200.
Today you can see medieval houses added to the top floor. 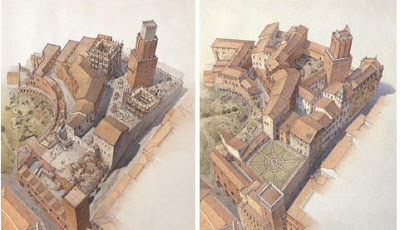 The market as a fortification in medieval times , and as the Convent of Santa Catalina in more recent times.


Later a convent was built in the area, which was demolished in the early 30s to uncover the original Roman structure. 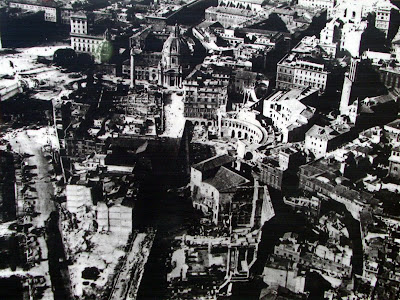 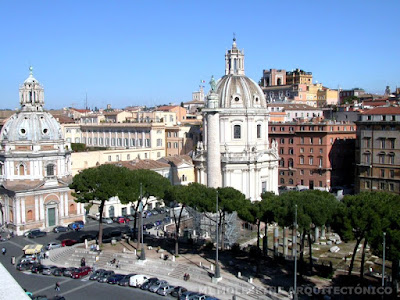 "When you go to the Trajan Market, don't miss the column" -a good friend told me- "and imagine that the Quirinal hill used to reach its top before its construction."

This superb column was erected by the Emperor Trajan in 114 AD to commemorate his victory over the Dacians. In fact, the impressive carvings that adorn the monument represent the emperor's military campaigns. The total length of the bas-relief is 200 m, and wraps the column 23 times. 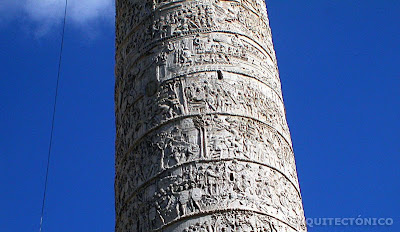 It is impossible to appreciate the detail of the engravings to the naked eye (the column was between Ulpia Basilica and the Temple of Trajan), so that the artwork was made to be seen by the gods. After all, Trajan himself was considered one of them. 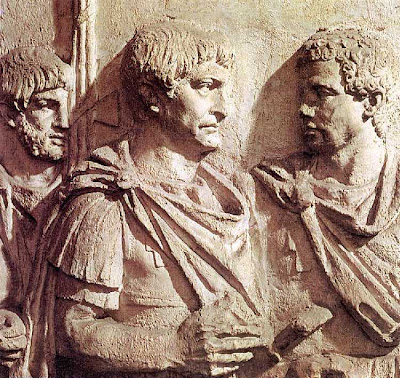 In addition, Trajan's Column stands out for its remarkable calligraphy .

The column is 30 m 8 m pedestal, and is composed of 18 blocks of marble from Carrara, 4 m and 40 tons each. It is, however a solid structure, as it has a staircase that allows access to the top. 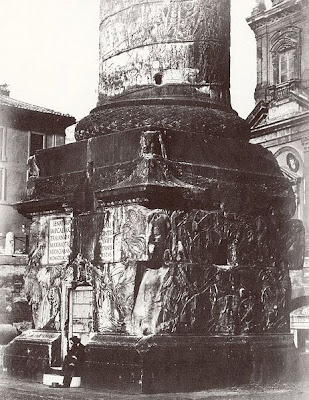 Pedestal of Trajan's Column in a photo from 1860. Source Wikipedia.


Originally there was a statue of Trajan on its top, but in 1588 was replaced by a statue of San Pedro. 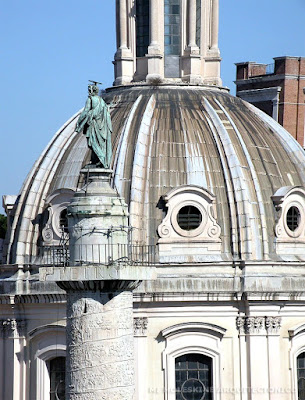 Posted by Carlos Zeballos at 12:16 PM