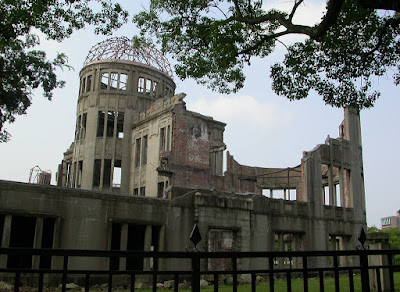 VERSIÓN EN ESPAÑOL
It was early morning on that 6 August 1945 in Hiroshima. This city had a major surge from the beginning of the Meiji period (1868).It was known as a commercial city, especially in the area between the Motoyasu and Honkawa rivers, which was the economic heart of the city. From very early, many of 350000 is inhabitants, among which there were many foreigners, especially Chinese and Koreans, had begun to bring life into the city’s busy streets. Given its importance, it also housed a military base. However, surprisingly, this city had not been bombed by the Allies until that time. 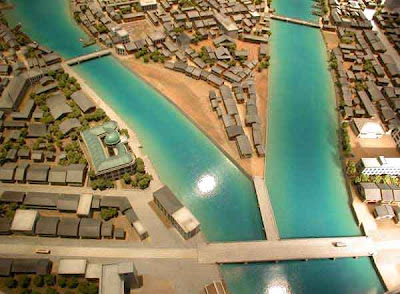 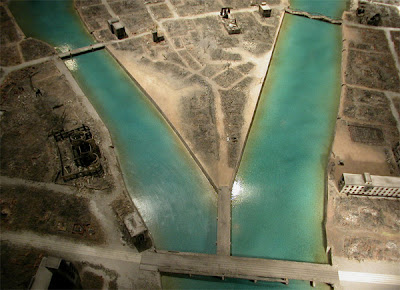 The same area after the bomb blast
At 8:15 am, a B-29 bomber named Enola Gay, dropped the first atomic bomb in history over Hiroshima, specifically targeting the T which is the intersection of the bridges over rivers Honkawa and Motoyasu. The device, nicknamed " Little Boy "was only three meters long and weighted less than 4 tons, exploding at an altitude of 580 m. Despite its small size, the bomb devastated Hiroshima within a radius of 5 km, resulting in death of about 140000-150000 people by December of that year.

Replica of the atomic bomb Little Boy, based on fission of uranium.
The atomic bomb released three highly destructive forms of energy: heat, winds and radiation. Near the hypocenter, the heat reached temperatures of 3000-4000 °C. In turn, terribly strong winds blew at 440 m/sec. (about 1600 km / hr), transforming doors and windows made of wood and glass into lethal knives. Simultaneously, it issued a huge amount of radiation was emitted, surpassing by far the average amount that a human being receives in a year. These three forms of energy instantly destroyed the city, smashing most of wooden homes and many concrete buildings as well as causing the death of thousands of people from burns, suffocation and poisoning. 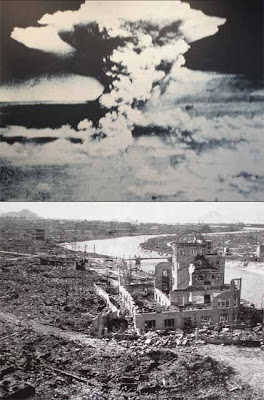 It was said that nothing would grow there for the next 75 years. But that same autumn, the green reappeared. 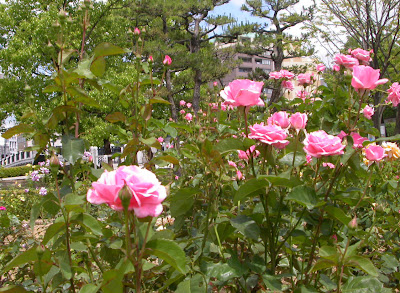 Peace Park. Hiroshima
Kenzo Tange, a noted Japanese architect and Pritzker Prize winner, was commissioned with the challenge of designing the reconstruction of Hiroshima. The Peace Park and Peace Center designed by him revitalized Japan, expressing the solidarity of human kind as well as symbolizing a commitment to peace. 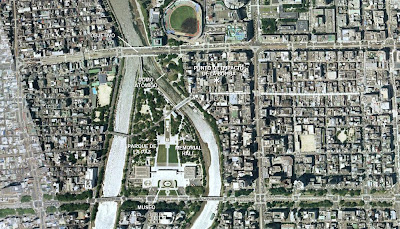 The Peace Park symbolically aligns to the atomic dome. It can also be seen the point of impact of the bomb. 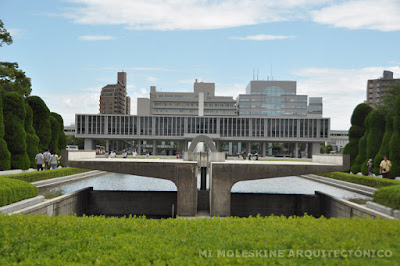 The Peace Center (1949) can not deny the influence of Modernism. The building expression, completed in exposed concrete, and its monumental size supported on pillars, inevitably evoke the master Le Corbusier. 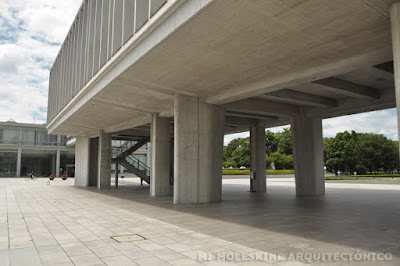 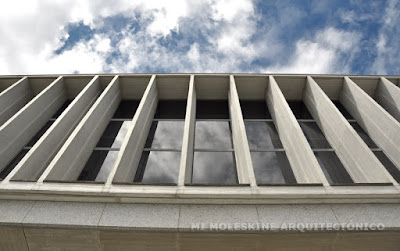 It is flanked on its sides by two smaller buildings for the Library and the Conference Center. In 1995 the three buildings were connected by a bridge. 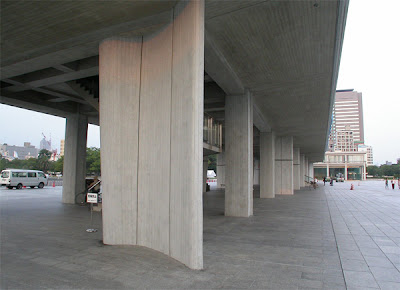 Peace Museum by Kenzo Tange and a detail of one of the pillars of Corbusian influence.
Inside, the Tange’s museum succeeds in transporting the visitor into the catastrophe of the blast. The exhibition ranges technical data about the bomb to dramatic testimonies of the victims, in theatrically prepared halls. 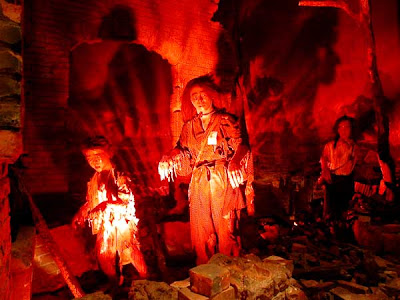 Dramatic representation of the destruction after the explosion. Peace Museum, Hiroshima.
The truth is that, beyond its 20 kilotons of TNT, its 1 kg of fissionable uranium or its mushroom-shaped cloud of 12 km high, the atomic bomb meant a tragedy for thousands of people who still continue to suffer the consequences of the explosion. 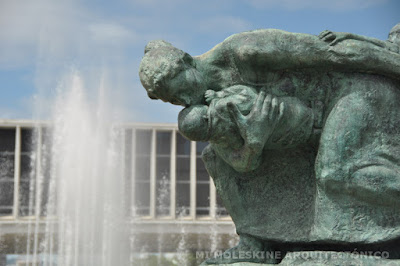 Moving testimonials as that of Sadako Sasaki, a girl who got leukemia and decided to make paper cranes with the idea that if she could make a thousand of these, she would be cured. Sadako died when she only had finished about 600 paper cranes, and her classmates completed the rest. The park honors her memory with this monument, representing Sadako with a paper crane.

Monument in honor of Sadako Sasaki
In addition, Kenzo Tange incorporates elements of the Japanese tradition, as this parabolic shape that resembles a saddle, and evokes the way of the Haniwa, the traditional tombs of former rulers of Japan. 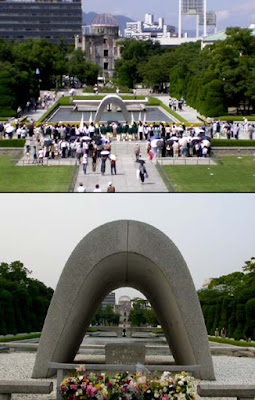 Monument to those killed in Hiroshima. The ruins of the Atomic Dome can also be seen in the distance. 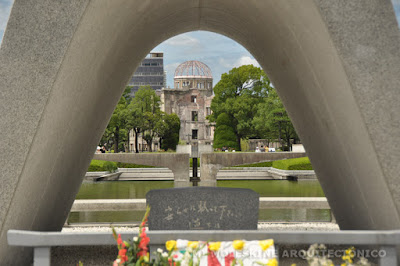 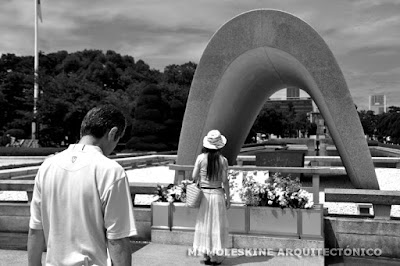 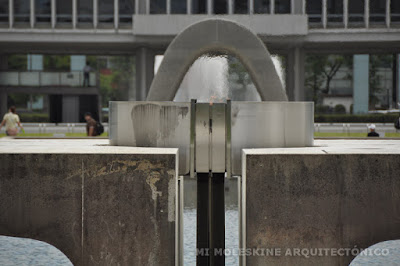 Another interesting building designed by Tange inside the Park Center is the Hiroshima Peace Memorial Hall (1994). 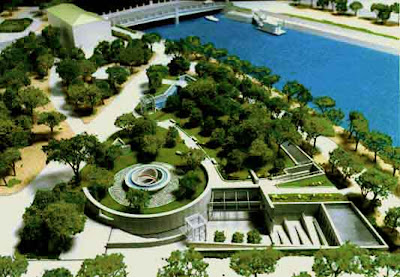 Half-buried, this cylindrical building contains testimonies and other data to which the visitor can access through multimedia. After passing the entrance dug into the ground, a spiral ramp leads to a cylindrical space, where a 360°photography of Hiroshima after the bombing is displayed. 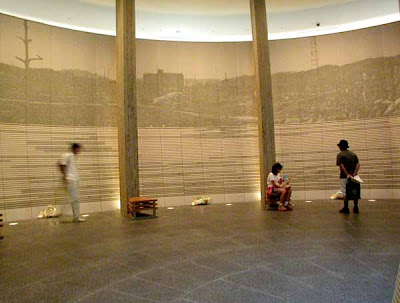 In the center of this space there is a fountain of water and above it a glass skylight, both in the form of a clock ticking at 8:15, the time of the disastrous event. 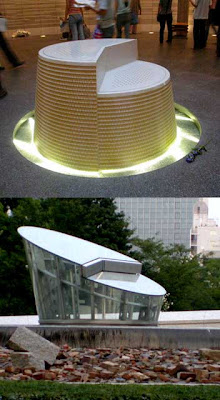 At only 200 m. from the hypocenter, the Atomic Bomb Dome, the ruins of the former Industrial Promotion Hall of Hiroshima Prefecture remains still standing. 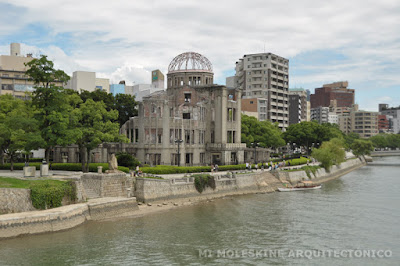 This building was completed in April of 1915 under the design and supervision of Czech architect Jan Letzel, capturing the fancy of the citizens of Hiroshima with its characteristic green dome.

"Concrete for his buildings, large buildings, hospitals and so on. Concrete was not jeopardized by earthquakes. Earthquakes in Japan regularly destroyed traditional Japanese wood and paper architecture, which, with concrete was not the case, making Letzel a very successful man.

This work was designed in the Viennese style, perhaps influenced by Otto Wagner's Steinhof Church in Vienna, and the material was also concrete. This is the reason why the frame - or the skeleton - of the building survived. And, from what I know it was a very popular building before the war. Everybody knew there - at that time - that it was designed by a Czech." 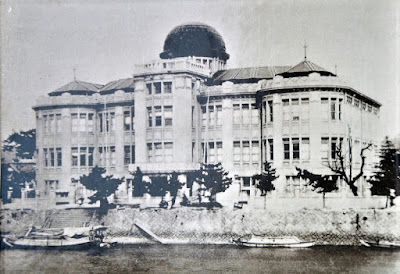 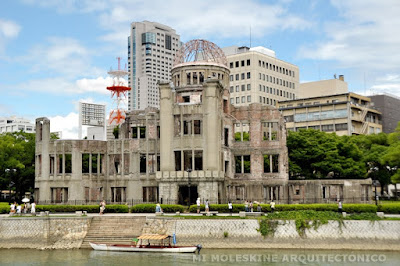 The atomic bomb exploded at an altitude of 580 meters, approximately 160 meters southeast of the Industrial Promotion Hall, instantly killing everyone inside the building which was seriously damaged and completely burned out. 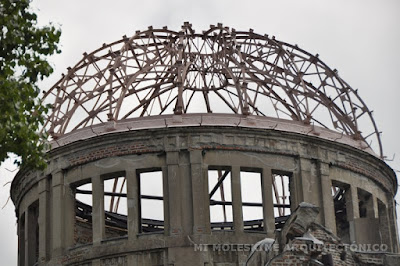 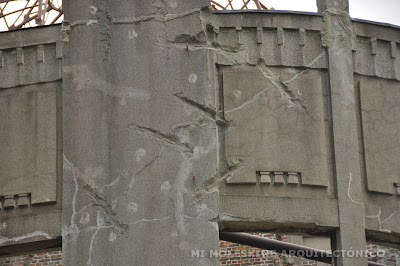 The Genbaku Dome was initially intended to be demolished with the rest of the ruins, but the fact that it was mostly intact delayed these plans. In 1966 Hiroshima City declared to preserve the now termed "A-bomb Dome" indefinitely. 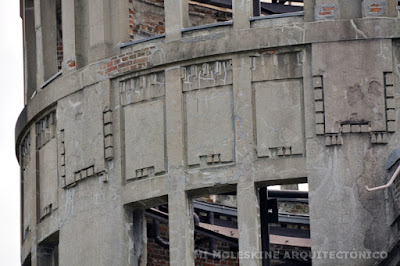 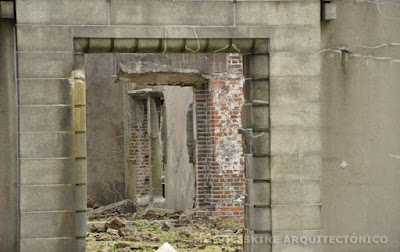 Numerous works of reinforcement have been made in order to keep this place as a testimony of that tragic event. This place was declared a UNESCO World Cultural Heritage in order to make it a lesson for humanity, with a clear and strong message: never again a nuclear war. 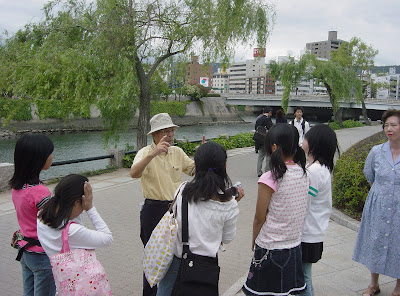 A bomb survivor explaining their experience to a group of children.
Each August 6, thousands of people gather in Hiroshima to unite their voices for peace. That 2003 I had the intense experience of joining them.
Posted by Carlos Zeballos at 2:09 PM