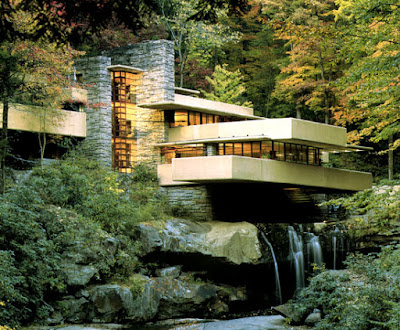 When I think about the conjunction of landscape, water and architecture, I definitely evoke Frank Lloyd Wright’s Fallingwater, the house that he designed in 1935 for the merchant and philanthropist Edgar J. Kaufmann and his wife Liliane in Pennsylvania, USA. More than 70 years after it was built, Fallingwater is undoubtedly the best example of American architecture and continues to impress by its spatial composition, the innovative use of materials and especially by its perfect integration into the surrounding landscape. Fallingwater, the most famous private residence of the twentieth century, harmonizes with its natural environment by proposing a series of boxes that give the impression to levitate over the water. As stated by Franklin Toker in his fascinating Fallingwater Rising, "Visiting Fallingwater has little to do with architecture or engineering: the quality we perceive here is essentially spiritual." 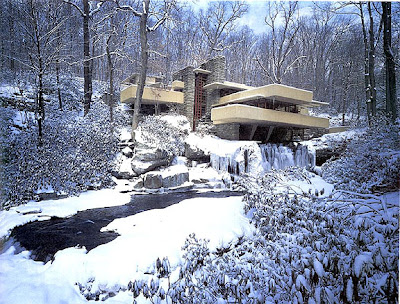 Photo courtesy of Western Pennsylvania Conservatory (WPC)
The house, built between 1935 to 1937, world-renowned not only give back world fame to a nearly forgotten Wright (at that time he was 67 years old and he had had no major commission for about a decade), but at the same time it enabled the Jewish merchant EJ Kaufmann to earn respect from the biased and anti-Semitic society of Pittsburgh in the 30s. Edgar Kaufmann Jr. would also have an important role in promoting his father's working relationship with the architect, although its role has been questioned by researchers such as Toker. But what cannot be denied is his generosity, since it was due to Edgar Kaufmann Jr. that Fallingwater was able to keep intact its architecture, its furniture and upholstery (also designed by Wright specially for the home), its fine art collection and the natural environment that he managed to recover and protect. Thanks to him, the house is now open to the public. 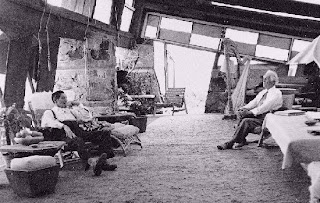 EJ Kaufmann and Wright at the Taliesin (Photo courtesy of WPC)
The house is located over the Bear Run, a stream that in its short length describes a U-shape before joining the Youghiogheny River, in a wooded area near Ohiopyle, previously damaged by mining. After being acquired by the Kaufmanns, the area was ecologically recovered and scenically enhanced. 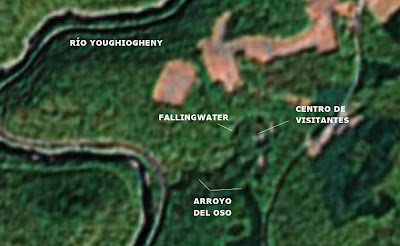 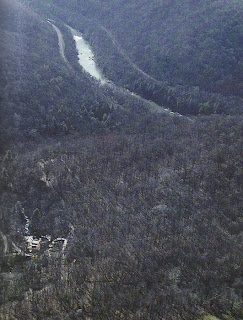 Left down, Fallingwater. Above, Youghiogheny River (Photo courtesy of WPC Thomas Heinz)
Analyzing the site Wright noted that not one but two waterfalls cut through the stream in diagonal, in the direction of the flow. Consequently he placed the volumes by rotating the direction of the overhangs 90 degrees and therefore achieving a gradual terracing of the horizontal volumes, which appear to be floating freely, only supported by the rigid purity of the vertical box that holds them. 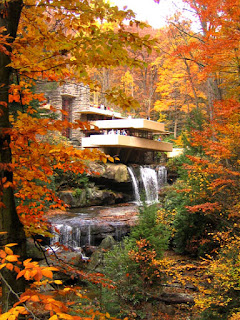 Nine months passed since the first time that Wright saw the site up to the moment in which the project was drawn on paper. During that time, at least three visits of Wright to the Bear Run have documented, in which the architect conceived the building in his head. Not one line was drawn at that time, as Wright would say "the building is conceived in the imagination, not on paper but in the mind... Let him live there, gradually taking definitive shape before committing to the drawing board . When that thing is alive in you, start to plan it with drawing tools. ... Not before. " So, nine months was Fallingwater in Wright's head, and then it was drawn in just 140 minutes. During those months, many factors had to converge in Wright’s mind to produce such a peculiar result: from his previous work at the Robie House until the very influence of European architects. From the smooth and earthy shape of San Ildefonso Pueblo that fascinated him, until the Japanese drawings of waterfalls collected during his trip to Japan. 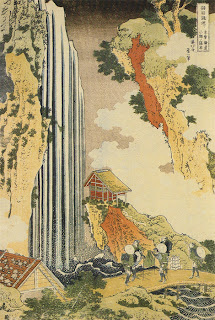 View of the Ono falls, by Hokusai. Source F. Toker
FOUNDATIONS
Wright based his composition on the dynamic arrangement of horizontal and vertical volumes dynamically prepared. To achieve a sense of lightness he used cantilevered terraces, locating them over solid but hidden trapezoidal supports, embedded in the rock. Wright associated this structural concept to the way a waiter carries a tray on his fingers. 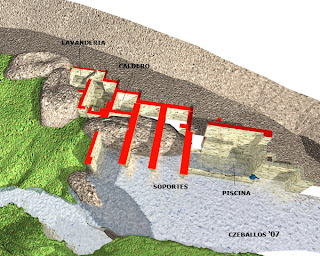 View of the foundations. Image by Carlos Zeballos 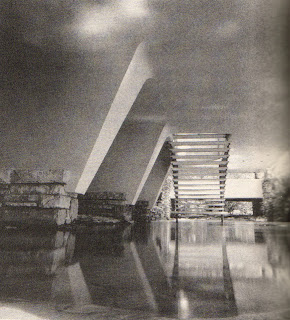 Image of the supports and the stairs to the Bear Run (Photo courtesy of WPC)
Then, reinforced concrete beams were placed over these supports, together with smaller transverse beams, arranged in a grid layout of about a meter wide and supporting the cantilever terrace. EJ Kaufmann was apparently suspicious of the efficiency of Wright’s structural calculation and he secretly ordered to increase the amount of steel in the structure; this caused the anger of the architect who berated his lack of confidence. However, Wright was wrong in his structural calculation. It was due to the extra steel that cantilevers did not collapse, even if in the 90s they already suffered a deflection of up to 20 cm. Post-tensioning works carried out in 2001 succeeded in stabilizing the structure, but they costed $ 11.5 million, about 100 times the original cost of the house. 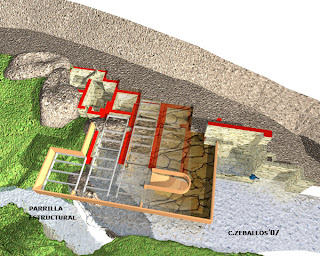 The first thing that catches the attention of the house is its lack of a "great entrance", as it was customary at the homes of the time. By contrast, the front door is hidden at the back of the house. Upon entering, the low ceilings, the large windows and the lack of walls inside the hall lead the view to the landscape. The sound of the waterfall is ubiquitous, but it is invisible inside the house. The stone floor and the fireplace also covered in stone is fused with the rock on which construction is embedded. The interior design seems be a part of the house and the art collection, mostly composed of Asian and Latin American art, helps to give an air of mystery to the space. 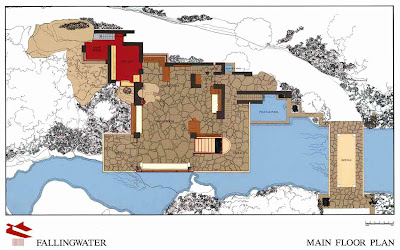 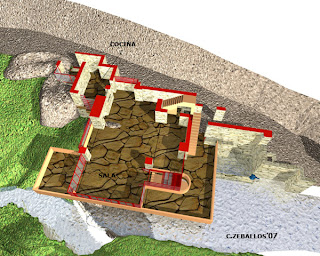 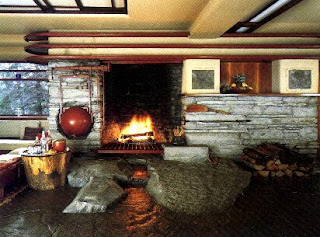 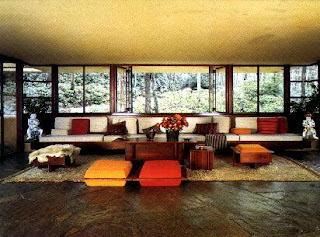 Interior of the living room (courtesy of WPC)
SECOND LEVEL

A large terrace extends in front of the Kaufmanns’ bedroom, visually integrated to the landscape. Something that caught my attention is that the toilet has also large windows to the outside, unlike the typical W.C. which is a closed cubicle. Nobody can deny that EJ had style even while going to the toilet... Unlike the W.C., the bathroom is located in an inner part. The dressing room is a more opaque volume, where Wright implemented a vertical window that runs through all three levels. 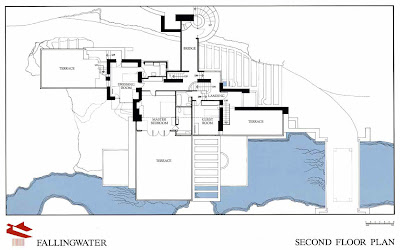 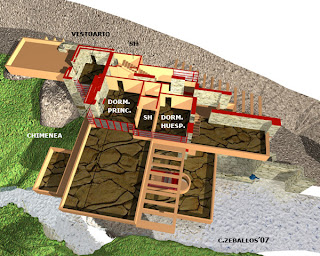 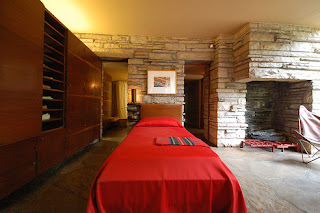 THIRD LEVEL
Much smaller is the third level, which houses the room of Edgar Kaufmann Jr. These are basically a small space for the bed next to the terrace, also widely lit by windows (the windows have no frame in the corner, which gives a remarkable transparency and were an innovation at the time) and the study, where eventually Edgar moved because his "bedroom" was very small. There is also a connection between the two terraces, although it has probably been little used. 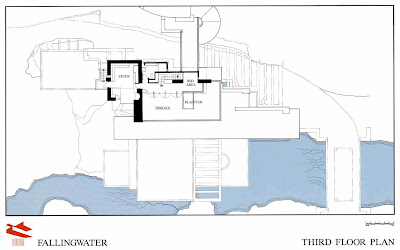 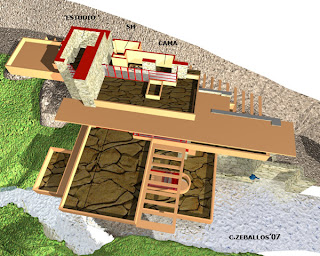 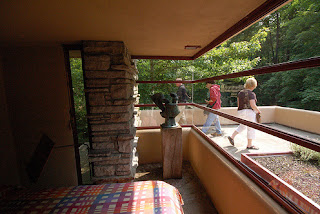 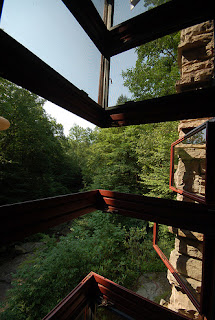 
After Fallingwater was finished, it became clear that the guest room on the second level would be insufficient for its frequent visitors, so Wright was commissioned to design a separated guest house, a little higher than the main house. Both are connected by a semicircular staircase whose ceiling (supported by metal tubes on just one side to strengthen its ethereal character) folds following the slope on the ground. 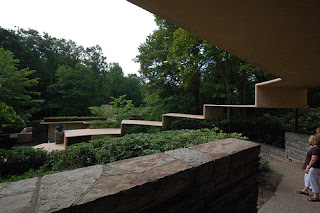 Access to the guesthouse. Photo courtesy R. Bean
The guest house retains the layout of the main house and it also enjoys magnificent views and a swimming pool. 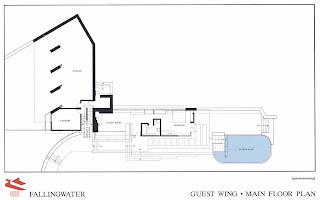 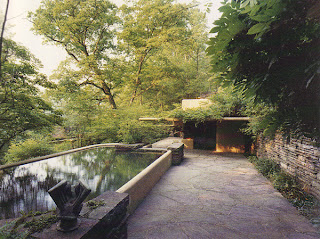 More than 2 million visitors have made the pilgrimage to Fallingwater in this hidden American forest. The famous actor and architecture aficionado Brad Pitt recently said: "I had a visual sense of the Fallingwater, but experience it in person, hearing the sound of the waterfall running under the house and the aroma of the wood in the fireplace, was better than anything I could have imagined .... ".Well, computers still cannot reproduce the smell of wood in the fireplace, but this movie made by people from Digital Urban, gives a very impressive approximation of the house and its surroundings.

The contextualism of the house with the landscape, using a modernist architectural language, the rich articulation of the interior surfaces in accordance with the dramatic exterior volumes, the subtle integration of its furniture and its valuable artistic heritage make Fallingwater the most outstanding piece of architecture in the United States, which influence continue today. As Toker wrote "There was never a house like Fallingwater. There will never be again." 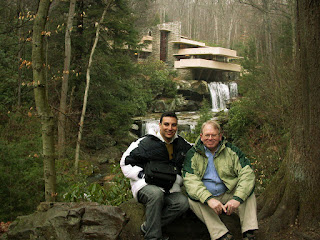 Thank you so much Dr. Ernie and Sandra Manders for your kind hospitality!
Posted by Carlos Zeballos at 5:59 PM