THE MELIKOV HOUSE AND THE RUSSIAN CONSTRUCTIVISM 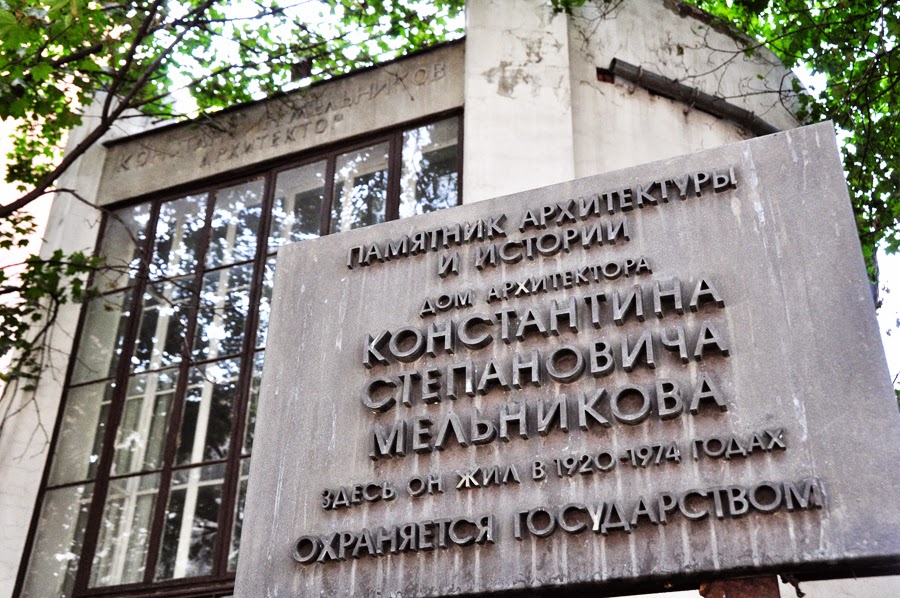 The Konstantin Melnikov's house-studio, the most renowned example of Russian Constructivism, is located in the peaceful Krivoarbatsky street (parallel to the bustling pedestrian Arbat street in Moscow), hidden behind the foliage of the only tree on the block. 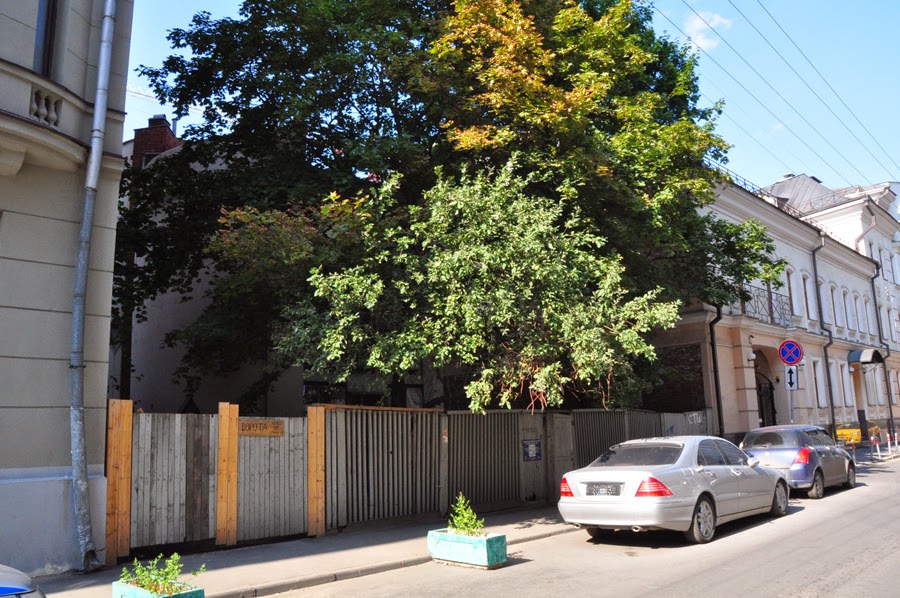 At first glance, it is remarkable that this is the only building with a setback in the whole block. A front garden makes evident the curved geometry of the building and its unique composition. These characteristics, dissimilar to those of the typical Stalinist architecture of the time, were permitted only due to the popularity of Konstantin Melnikov, who won the gold medal at the Paris Exposition in 1930. However, in later decades he was isolated and ridiculed by his colleagues and the house was repeatedly threatened with demolition. 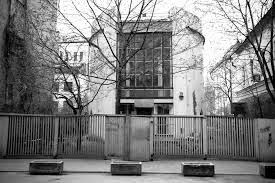 Furthermore, it is curious that this was one of the few residences that were allowed to shelter a single family in a time between 3-4 families were living communally in the same house. The reason is probably that the Soviet authorities wanted to take this case as an experiment to study new housing typologies. 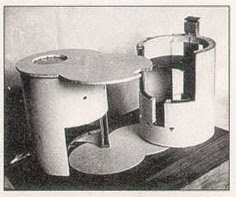 Indeed, in 1927 Melnikov received a small plot to build his private home - painting and architectural workshop. Once the project was approved, the architect himself began its construction, which culminated in 1929. 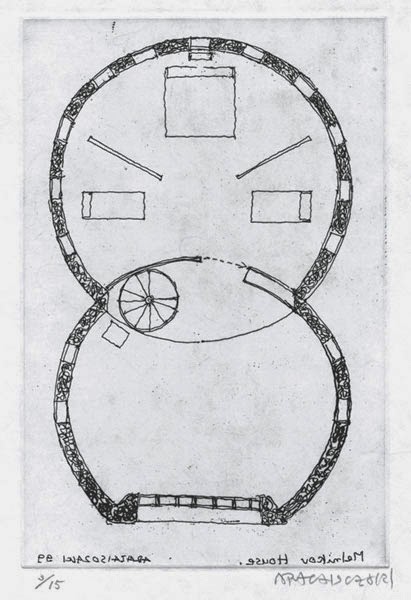 Sketch of the plant

The building consists of two interlinked cylinders of three levels each. They have the same diameter but with different heights, with the shorter south cylinder containing the entrance. This difference in height allows the light to enter generously through a window located on the last floor. 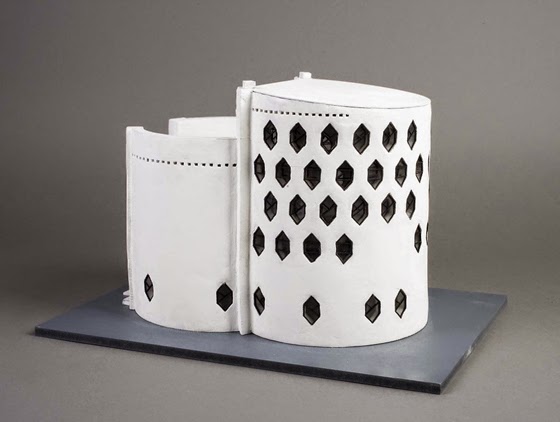 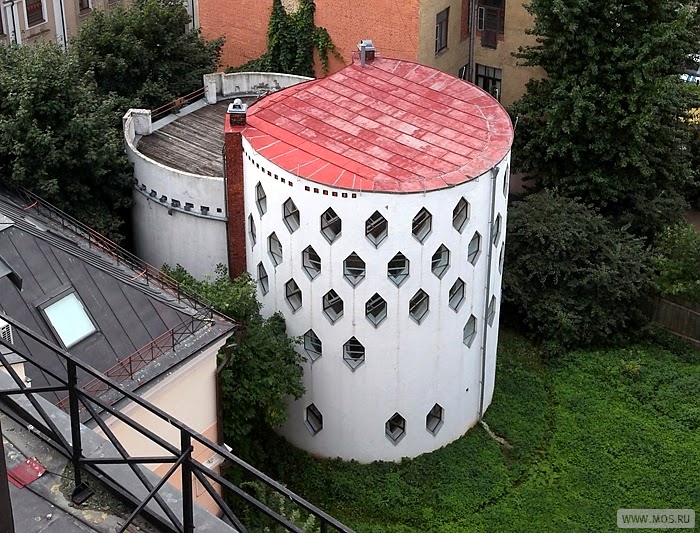 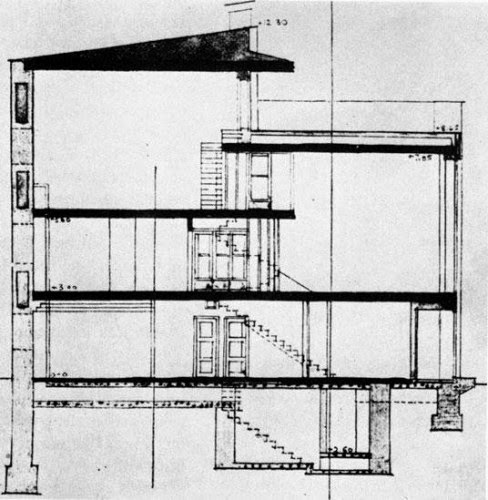 In the southern side to the street, the cylinder is cut by a glass screen that occupies the entire facade. 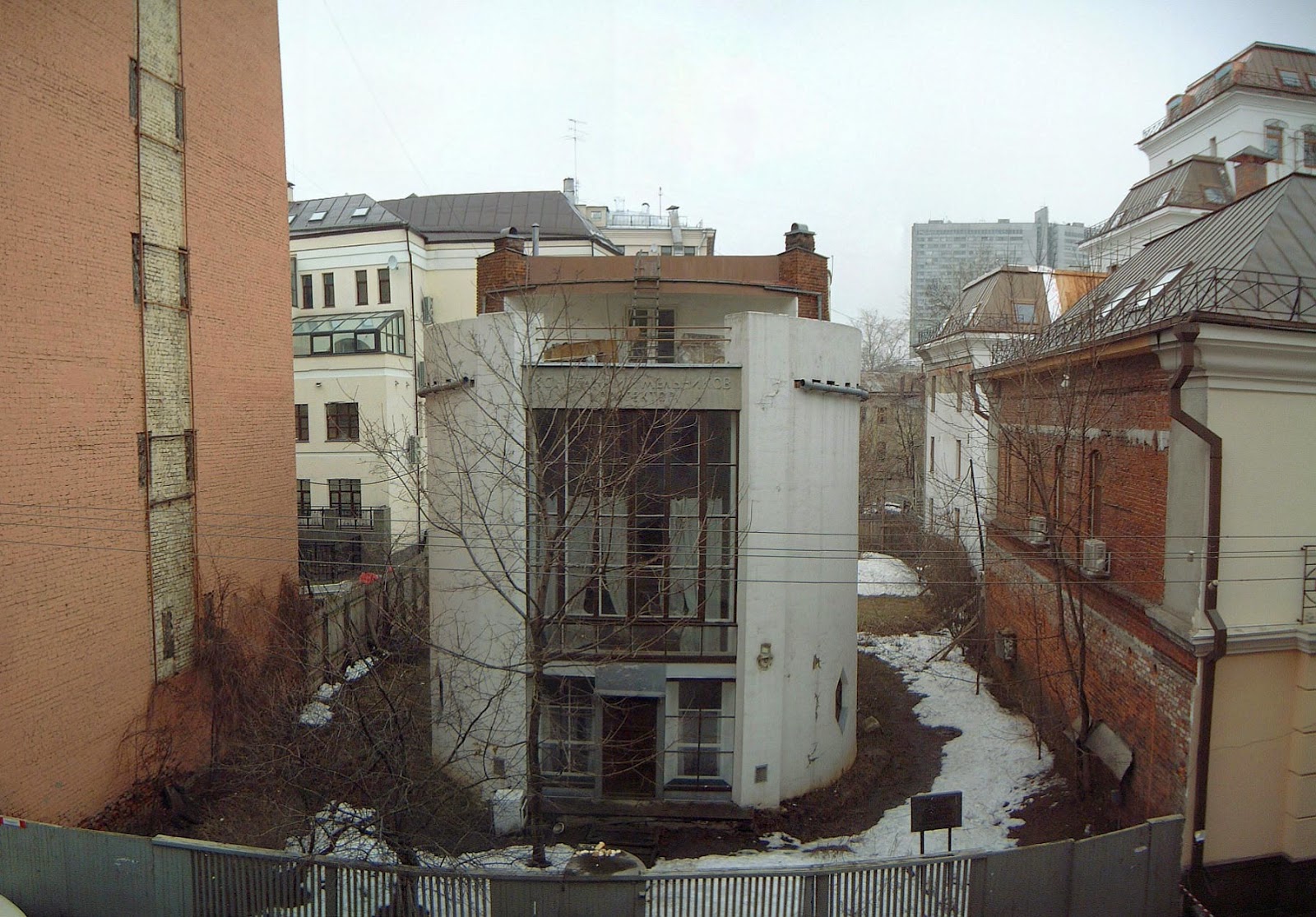 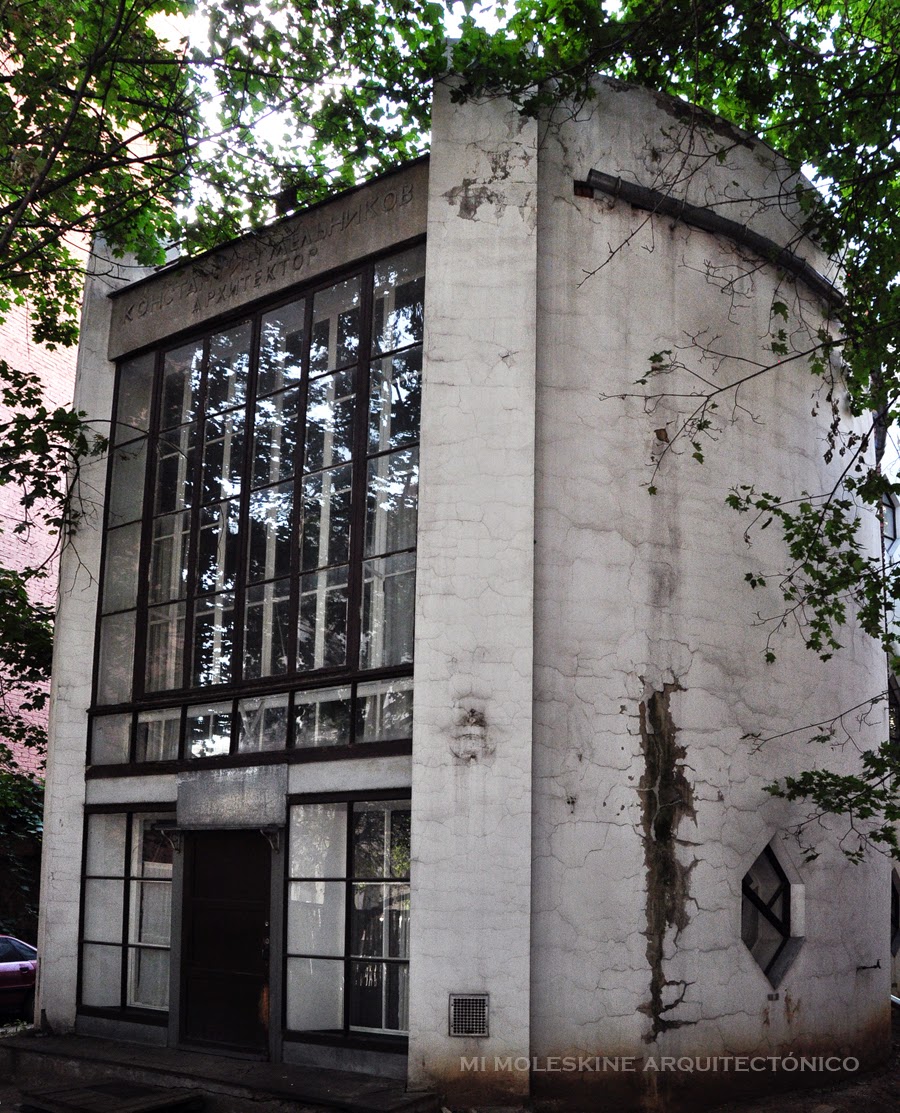 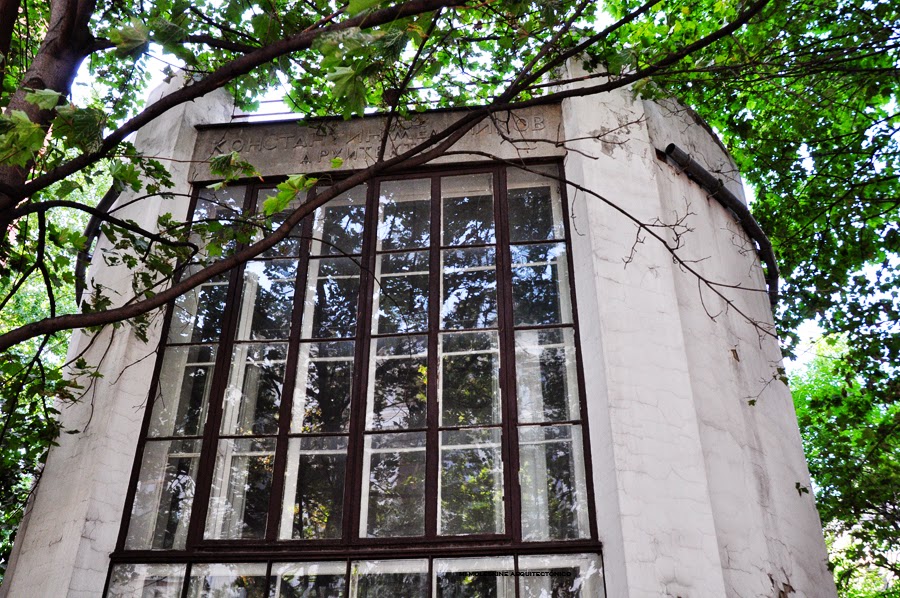 In contrast, the rest of the volume is more massive, pierced by a series of hexagonal windows. 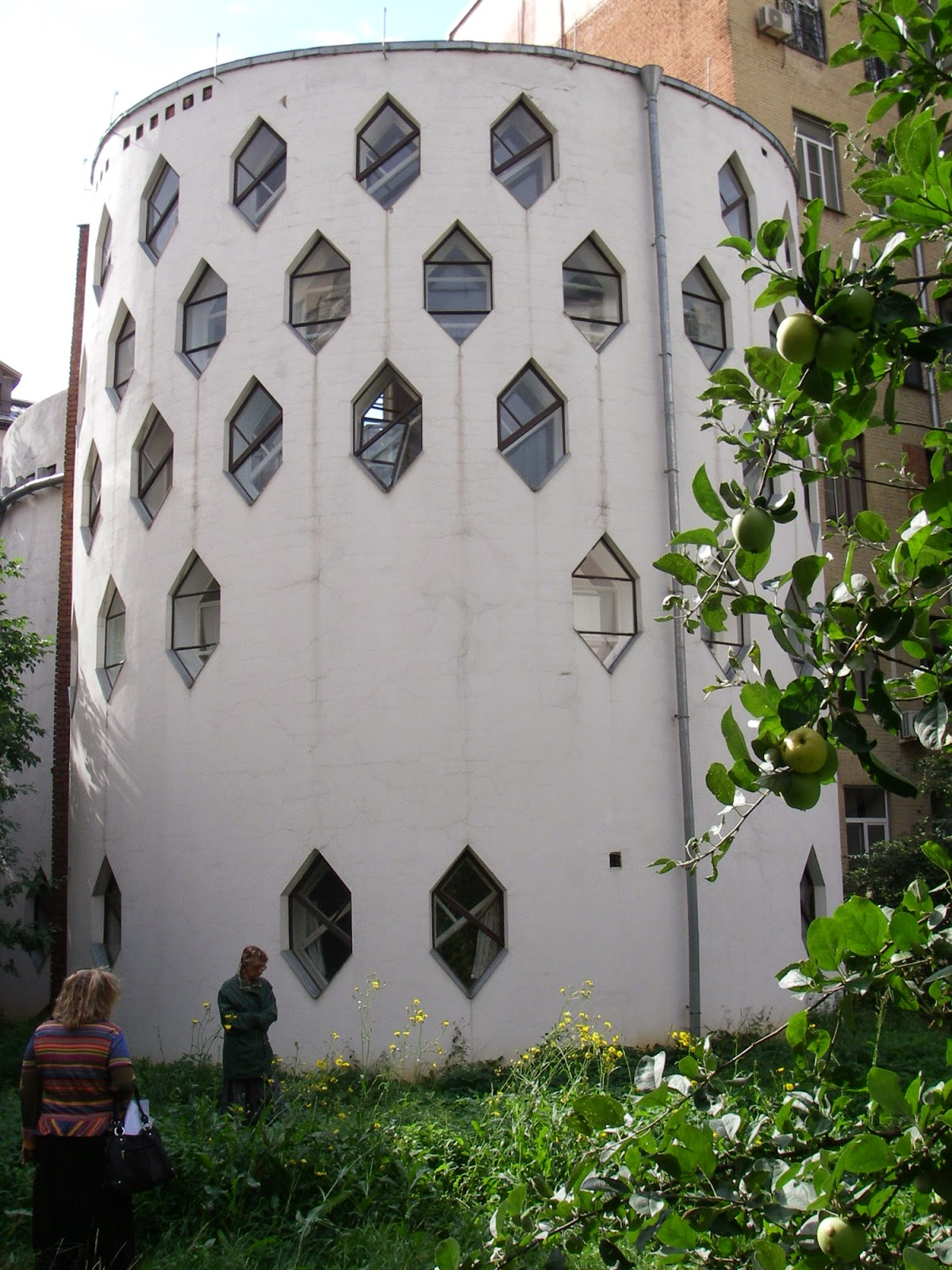 The geometry of the windows allowed saving material as bricks were scarce at the time of construction. 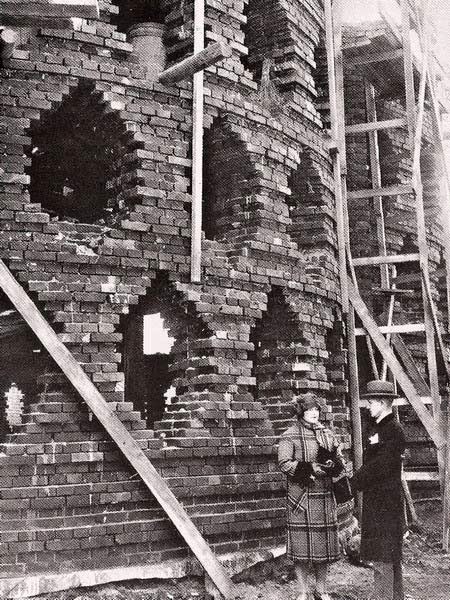 The structure works like a honeycomb and some of the hexagons were covered with clay and rubble (which also helps to keep a warmer temperature in winter). 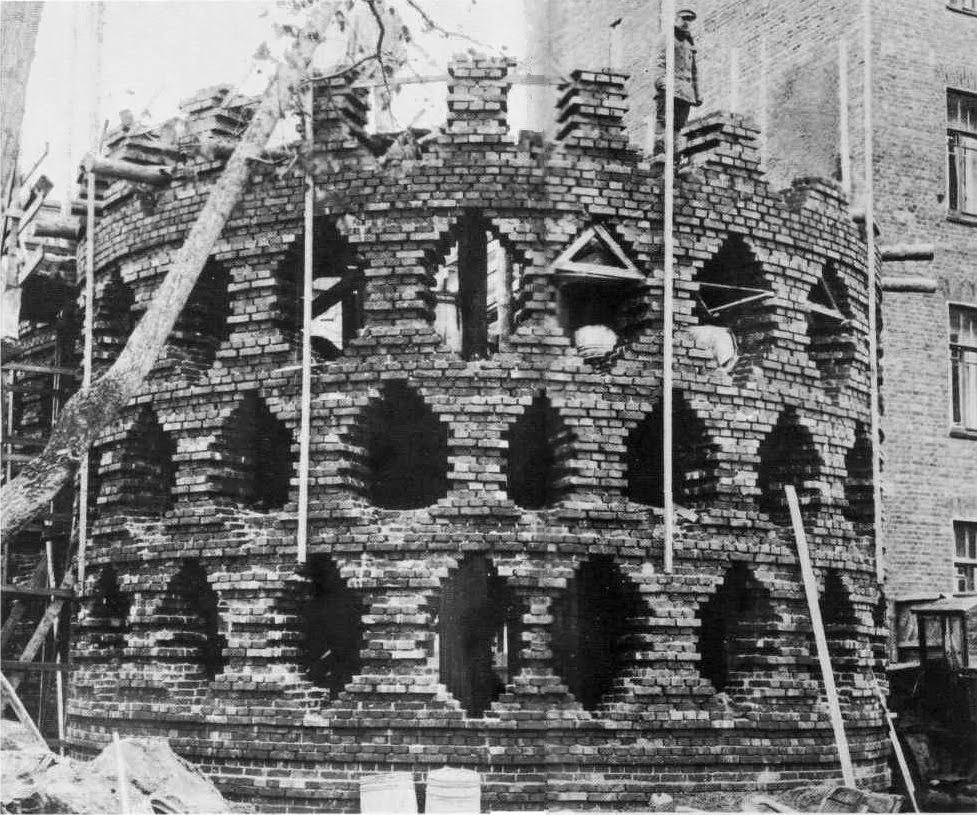 Others were converted into frames that housed about 60 windows of different sizes, whose role is to provide controlled illumination to the interior spaces. 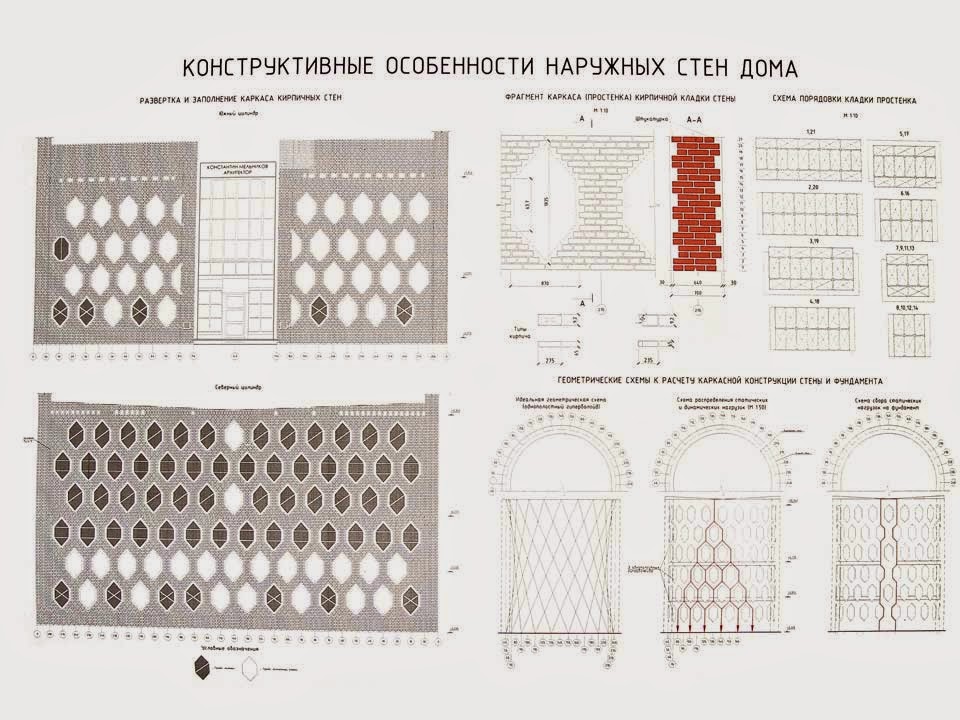 Outline and arrangement of the windows in the house 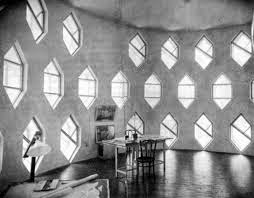 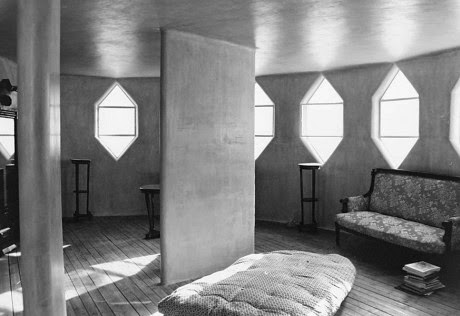 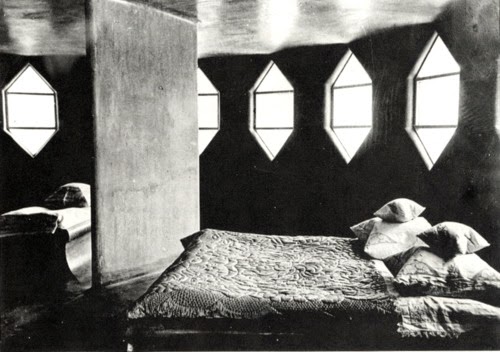 Indoors when the architect was alive 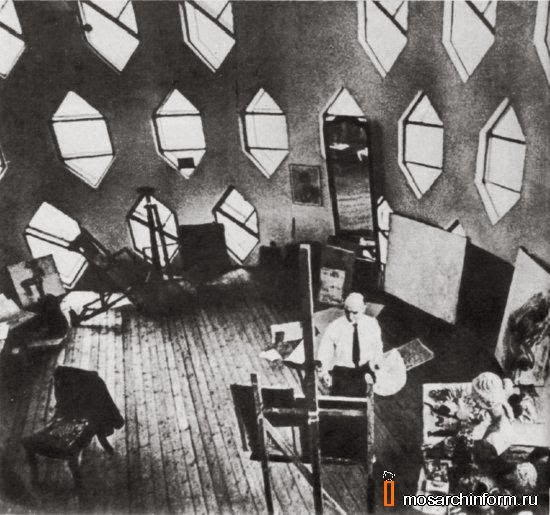 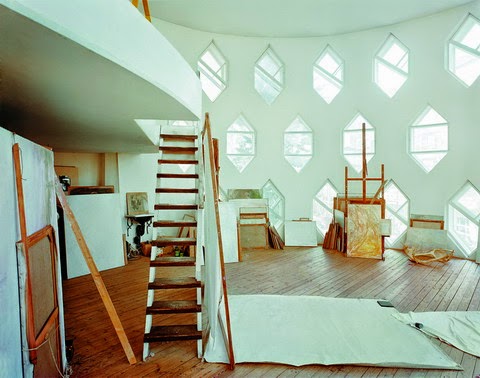 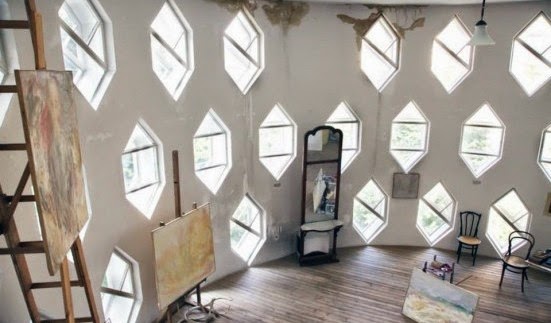 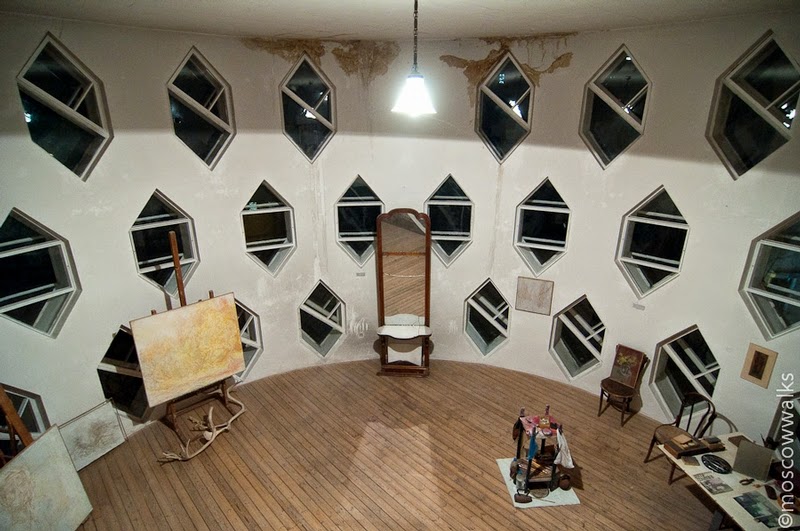 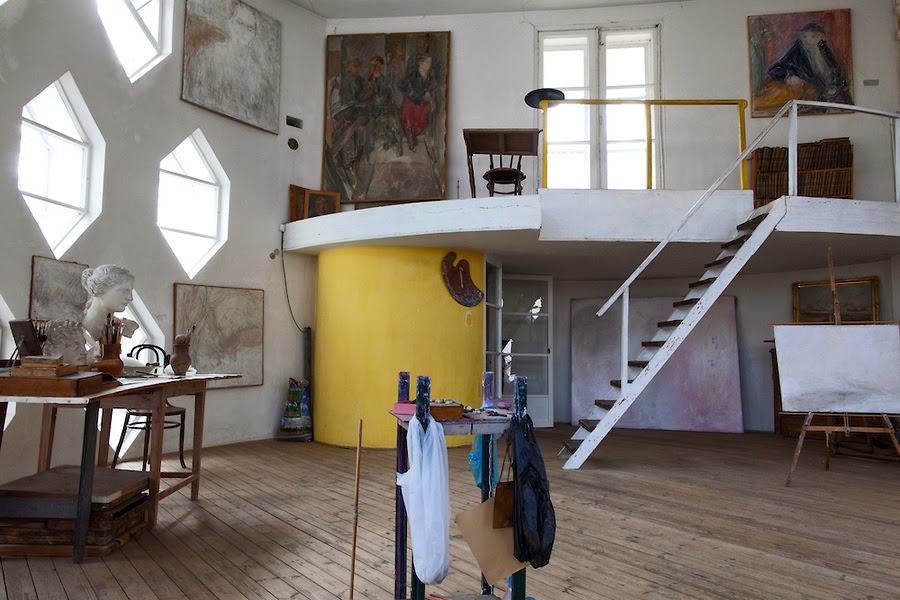 Interior of the house during a recent art exhibition

The entire structural load is absorbed into these cylindrical walls in order to free the internal space from walls, which allows higher flexibility.

The first of the three levels includes the entrance, hallway, kitchen, dining and working rooms for the architect's wife and children. The second level in one of the cylinders contains a living room and the other one a bedroom. The third level houses of the painting and architectural workshop and a terrace overlooking the double height of the entrance The architect also designed the furniture which has been kept by his descendants. 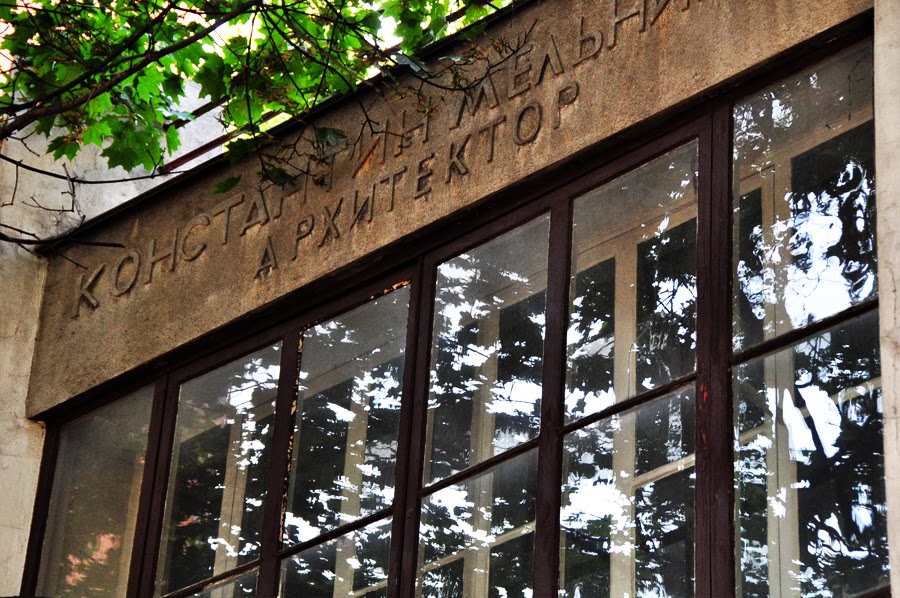 I must confess that I was impressed to see the situation of this iconic piece of modern architecture of the twentieth century. As you can see in the pictures it is unfortunate that the building is in such state of decay, despite the efforts of the family and the ministry of culture  to convert the house into a museum. Structural cracks are evidence that this structure is threatened to collapse, and although emergency has been declared already a couple of years ago, it seems there are still no concrete possibilities for its short-term restoration. 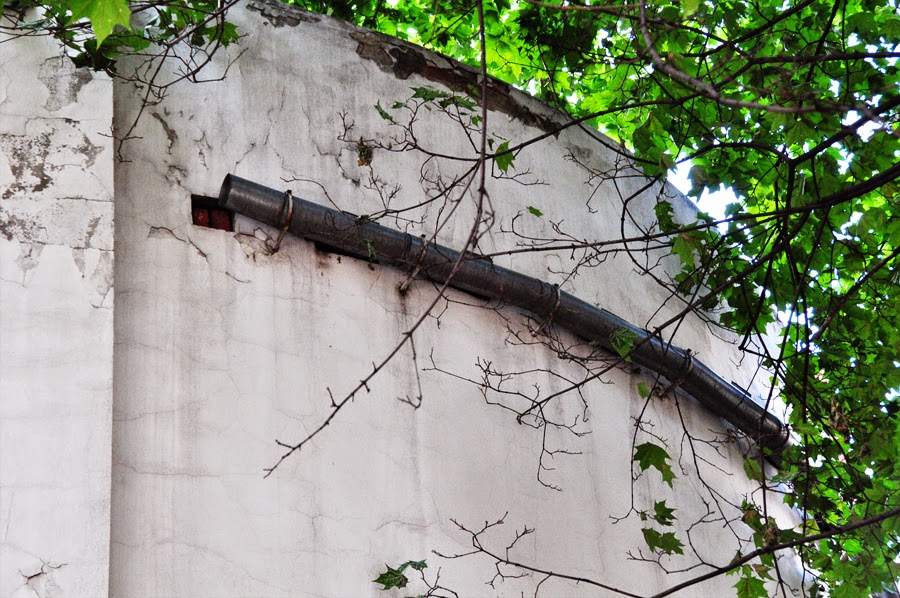 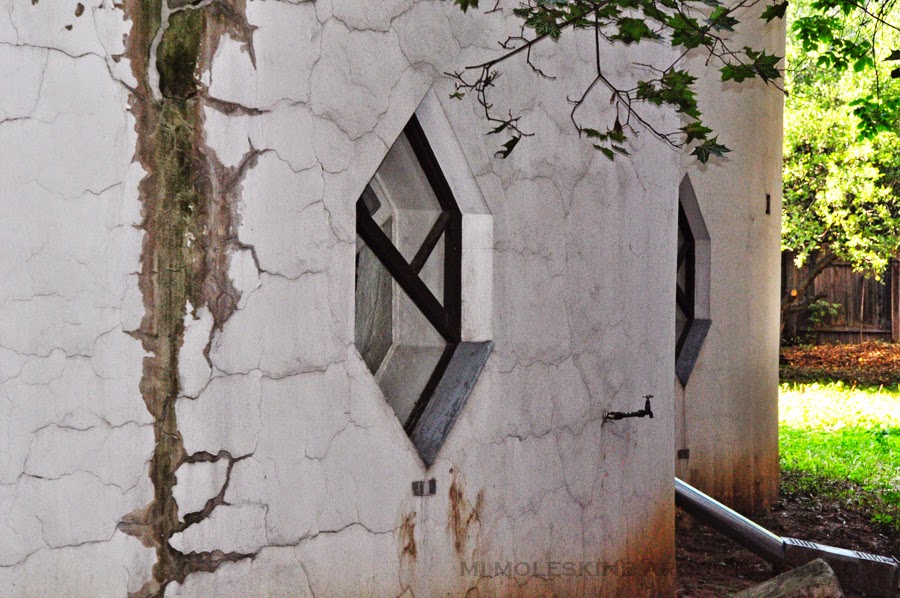 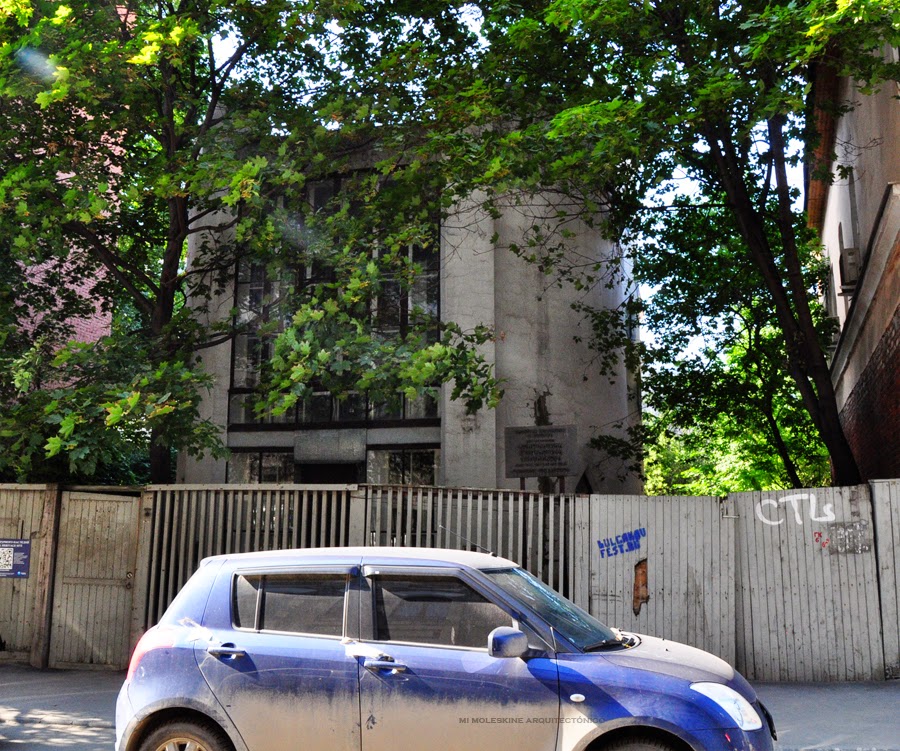 Posted by Carlos Zeballos at 12:53 AM