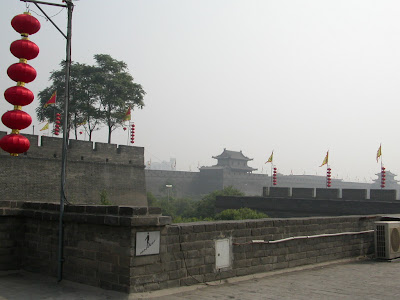 
Feng Shui is an ancient Chinese art that intends to channel the energy of the earth and the environment for the benefit of humans. In that sense, Feng Shui has recently achieved remarkable diffusion in the West through texts, magazines and the Internet as a set of frequently used concepts in interior design and decoration. However, the application of Feng Shui techniques, dating back 4,000 years, were closely linked to the architectural and landscape design and fundamentally to ancestral urban planning.


Feng Shui (风水) (pronounced fong shway) is a Chinese concept that means "wind and water". The Japanese voice Zoufuu Tokusui (蔵风得水) gives a more specific description as it means "keep wind, get water." The idea behind this principle is that "mankind can avoid calamities and ensure their own welfare by determining the divine will with respect to different places and then acting upon them" (Higuchi, 1983).

Some authors define the Feng Shui as geomancy, ie a "kind of magic and divination that uses landscape features or lines, circles or points made ​​in the earth." But the truth is that Feng Shi involves much more than just a form of art or geomancy, is a way of life that analyzes the environment and their relationship with humans. The truth is that, "magic" or not, there are places that are more conducive to human settlement than others, providing better sunlight, best channeled winds in winter and summer, ensure efficient water supply and provide a comfortable micro climate.

VITAL FORCE
The basis of Feng Shui is the vital energy that resides in all things, called Chi (气) in Chinese and Ki (気) in Japanese. (In that sense, there is an interesting parallel between the chi and the Apus, the spirits that, according to the Incas, lived in the elements of nature and were also considered in urban planning. I'll discuss about that in a future post. Instead , the genius loci or "guardian spirit of the place" in Roman mythology, and was also an important influence on European landscape design, has a more abstract character)
According to Guo Pu, a historian of the Jin Dynasty, the chi is the energy of the universe that is carried by the wind and the retained by water. However, the chi could be either positive or negative. By manipulating the quality of the wind and water as well as studying the properties of a space or territory and human behavior, it was possible to benefit from this energy flow.

BALANCE
A fundamental concept in Feng Shui is that the universe is governed by the existence of opposing forces, but complement each other for their existence and development. This concept is known as Yin and Yang. As can be seen in the Taijitu, yin (meaning "shady location, north hill" is the force receptive, feminine, dark, passive) is complemented by the yang (means "a sunny, south hill", is the creative force , male, light and active), there being a continuous flow between them. Moreover, the yin has within himself part of yang and vice versa. 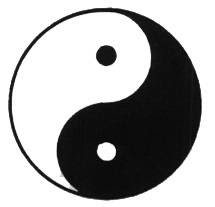 DIRECTIONS AND ELEMENTS
An octagonal diagram called Pa Kua or Bagua identified a direction according to the four cardinal points (north, south, east and west), and their intermediate variations (NE, NW, SE, SW) and associated them with symbolic elements:

ORGANIZING THE TERRITORY TO THE FENG SHUI

According to Akita Nariaki, "the four directions belong to the Green Dragon (east), the Crimson Bird (north), the White Tiger (west) and the Black Snake-Turtle (south); mountains, hills, buildings and houses are represented by these beasts. By studying the configuration of mountains and rivers, a site is selected where the vital energy that flows through the land is confined by water and not dispersed by the wind, and that place becomes propitious for building houses for the living and tombs for the dead. If one follows this principle, their descendants will nourish on the vital energy of the earth and obtain wealth, happiness and long life. "

With so clearly identified symbolic elements associated to the cardinal points, the grid emerged as a favorite urban pattern. The grid layout has been a scheme used throughout history to facilitate efficient territorial occupation. The Romans used it in their military camps, drawn from cardum and decumanum, the Spaniards used it in the foundation of cities during the Reconquista or their expansion in the Americas, and subsequently the grid-iron pattern was used in cities like Chicago or La Plata. But in the case of Feng Shui, the grid was used to symbolize magical principles, a representation of a celestial order on earth.

The grid model was first used in Chang An, the capital of the Han Chinese and widely replicated in cities such as current Kyongju in Koreaor Heijou  Kyou (Nara) and Heian Kyo (Kyoto) in Japan. 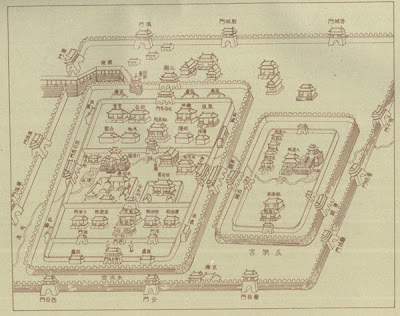 The city of Chang'an (长安 meaning "lasting peace"), currently known as Xi'An was the capital of Tang Dynasty in China from 618 to 907. It was founded long before by Liu Bang in 202 BC, creator of the first unified Chinese empire in the Han Dynasty. But it was during the Tang Dynasty where the city was at its height, being the largest city in Asia, equivalent to Rome in the West. 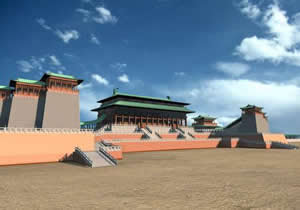 3D Reconstruction of Chang An

The shape of the city is a rectangle where the city exactly aligned to the cardinal points. All elements of the city were arranged according to Feng Shui principles: the separation into functional areas, the location of urban cults to the gods, ancestors and the heavens. 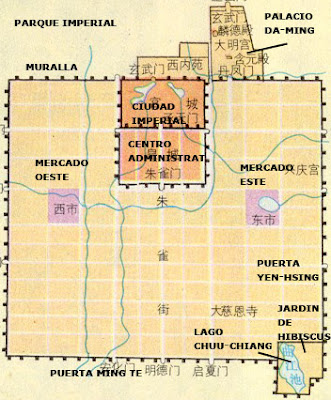 The rigid geometric order was also a symbol of the concentration of power and hierarchy of the mystical figure of the emperor. The scheme was generally symmetrical with the palace located north looking south, followed by an administrative area. Two major markets were located on either side of the city.

This market. Image courtesy of National University of Singapore

In the south, there was a large pond in the middle of a garden of hibiscus . The city was defended by walls that made even clearer the geometric scheme, interrupted only by  majestic gates, such as the Gate Ming Te.

Chang'an was destroyed at the end of the Tang Dynasty and reconstructed  as Xian, and while maintaining the geometric pattern of the ancient capital, today there is little that can be recognized from the original city. Important historical areas were demolished to make room to anonymous modern buildings during the Mao era, as it also happened in Beijing and many other Chinese cities. 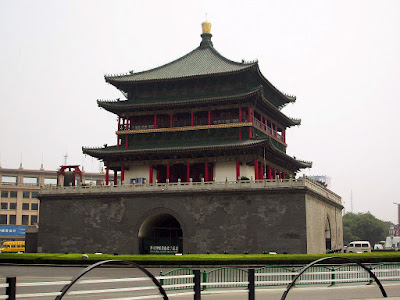 In addition, the development boom in the Chinese economy is destroying the rich heritage of this city at breakneck speeds. A pity. 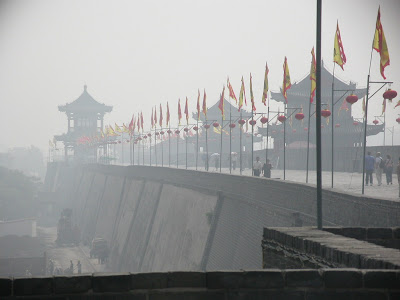 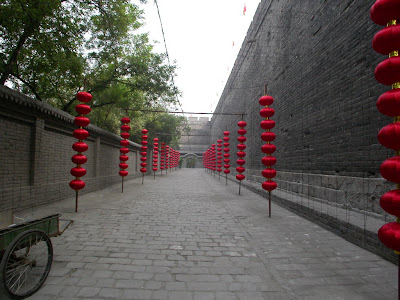 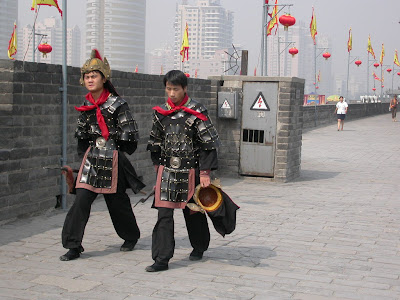 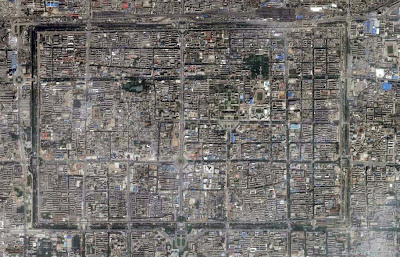 Xi'An today. While retaining a geometric pattern and orientation toward the cardinal points, as well as a large wall and a surrounding ditch, the city does not have the magnificency of old Chang An.
See location Google Maps 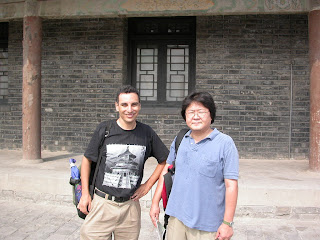 In Xi'An with Prof. Kobayashi, just five minutes before some pickpocket took away my wallet.
Well, I took the positive side of things ... very few times you can have a tour around Xian ... in a police patrol car!

Posted by Carlos Zeballos at 6:00 AM