THE PYRAMID AND COMPLEX OF DJOSER IN SAQQARA 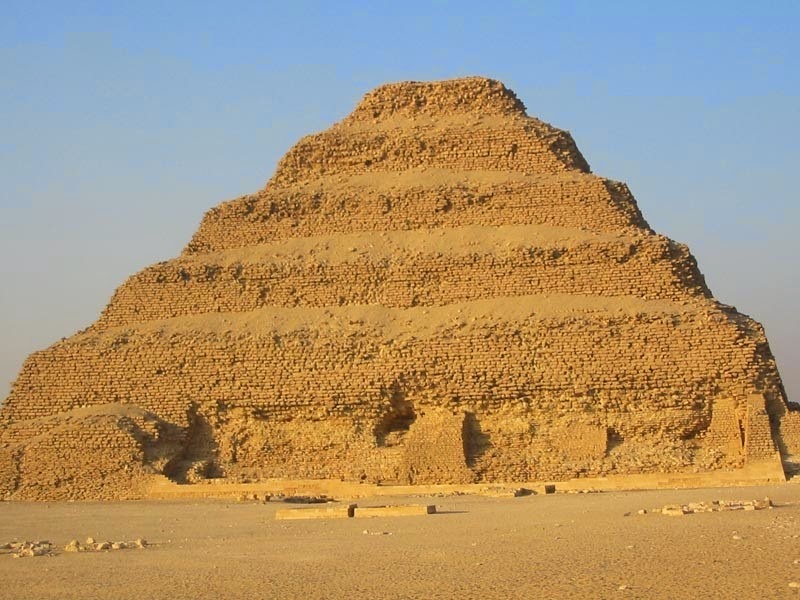 The Step Pyramid of Djoser at Saqqara is the first monument built in stone in the history of humanity and the one that determined the development of future Egyptian pyramids throughout different dynasties. Envisioned and carried out by the great architect, philosopher and physician Imhotep, the complex at Saqqara not only took a giant leap in the development of Egyptian funerary architecture but also (a fact less known) he experimented with an item that would have a huge impact on Egyptian as well as Greco-Roman architecture : the bearing column.

One of the most significant aspects of the Saqqara complex is its location, West of Memphis, the Pharaonic capital and about 7 kms from the Nile River. It is important to stress that Saqqara, like Giza, were not inhabited settlements: they were cities for the dead . The location on  the West is related to the direction of the sunset, a representation of death and the point where the sun touches the earth. The Saqqara plateau was ideal for this purpose, its height protected it from the floods of the Nile, as well as due to the desert character of the landscape, in contrast to the lively one in the capital Memphis. Even today it is clear that abrupt separation between the crops and arid surroundings of the funerary complex. Both the overall layout of the complex as well as the details of many of its individual buildings can be explained as the secular translation of residential architecture in Memphis to stone funerary architecture in Saqqara. 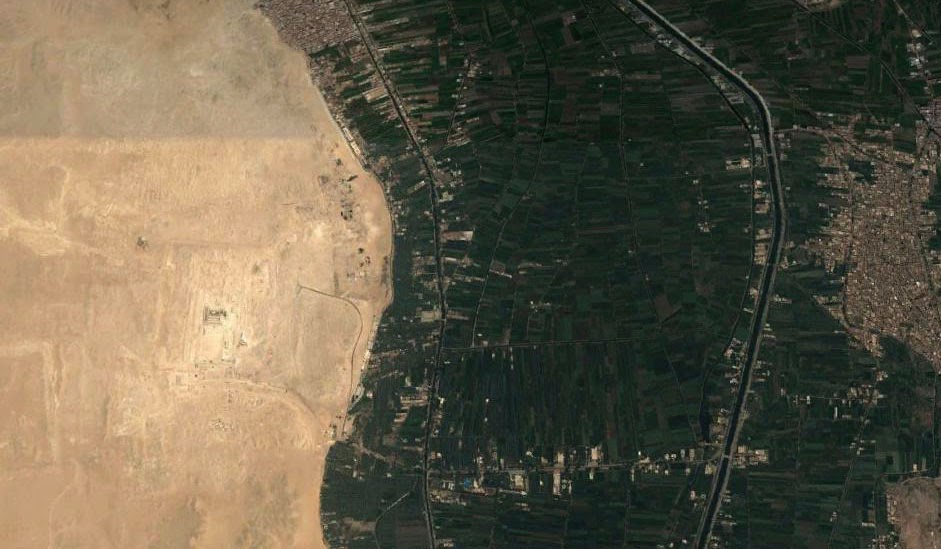 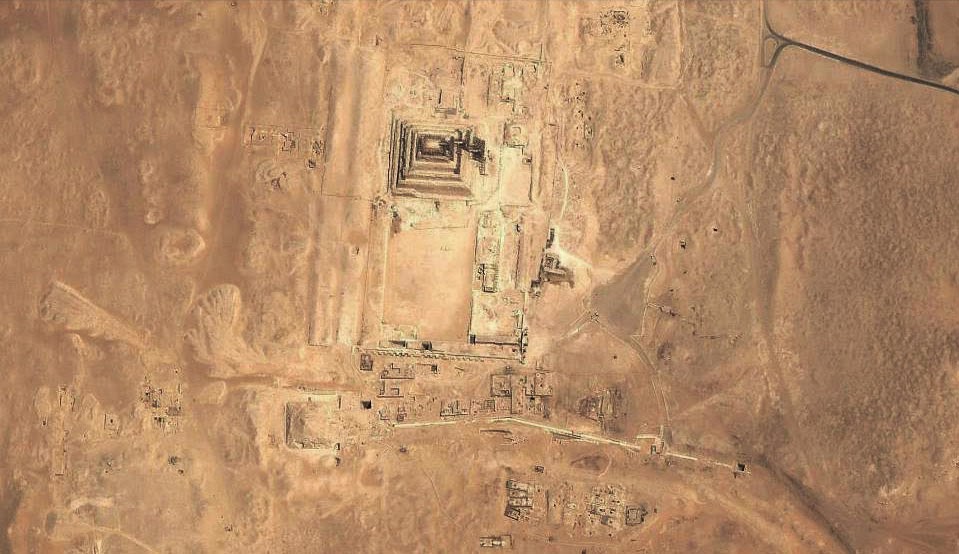 Prior to Djoser, the tombs of the nobles and dignitaries were mastabas (Arabic word that means "benches" given their trapezoidal shape), which were stone  equivalents to the adobe houses of the cities. Structures were rectangular and of slightly sloping walls, flat ceiling and with a single entry. Once the sarcophagus and the treasures of the deceased were placed in an inner room called serdab the door was sealed and covered with rocks and sand. 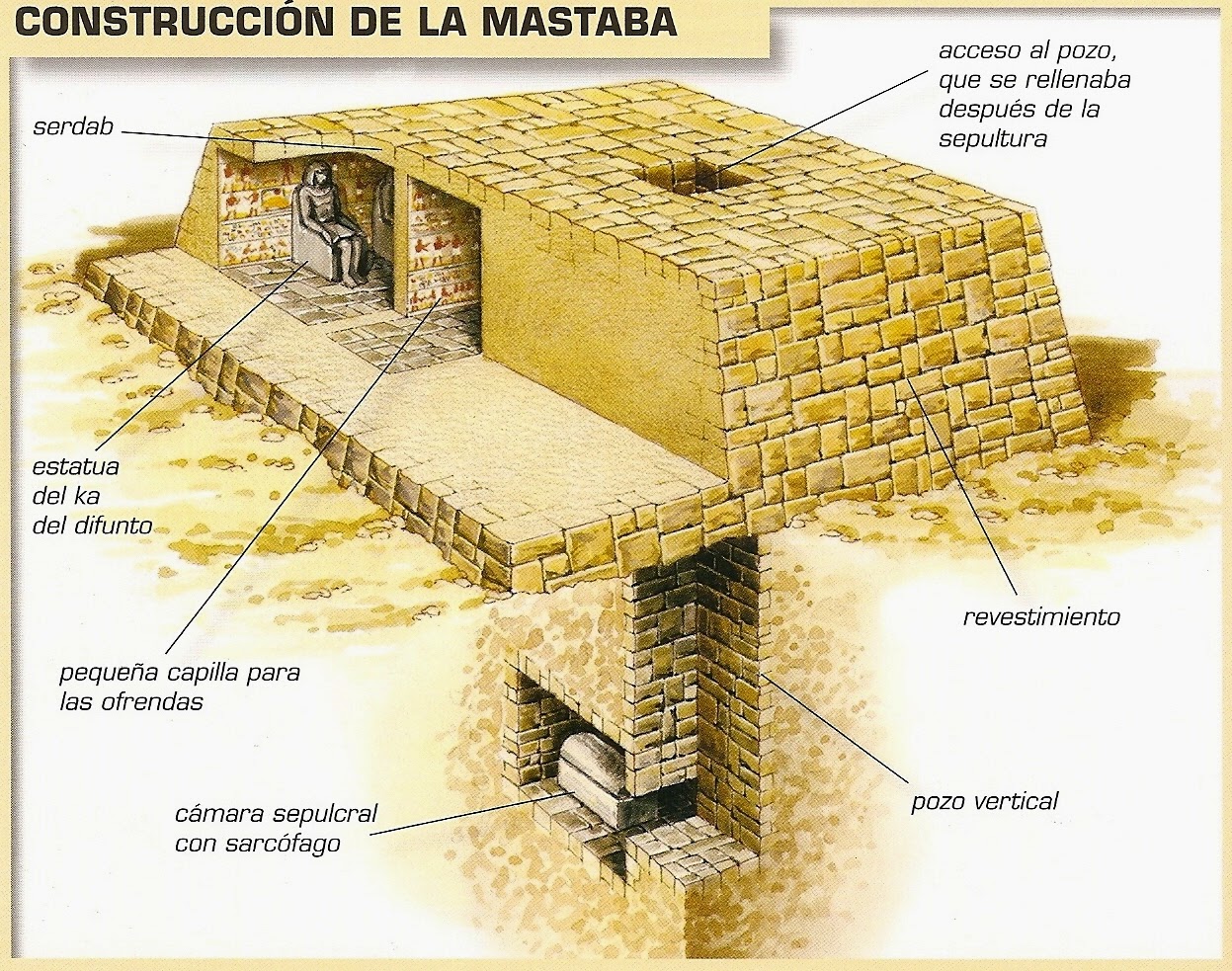 The pyramid shape was not planned from the beginning. Initially just a mastaba was developed, as it was the tradition. It is said that Djoser was very disappointed to see the stature of his grave and demanded to be built higher. Thus, the great architect Imhotep came with the solution of to creating a platform above the first mastaba, then another, and another, until a total of 6. Prior to increase the height he was also expanding the  mastabas at the bottom, until covering an area of 125 x 109 meters a base. These additions became evident after the collapse of part of the southern wall thus revealing its internal structure. 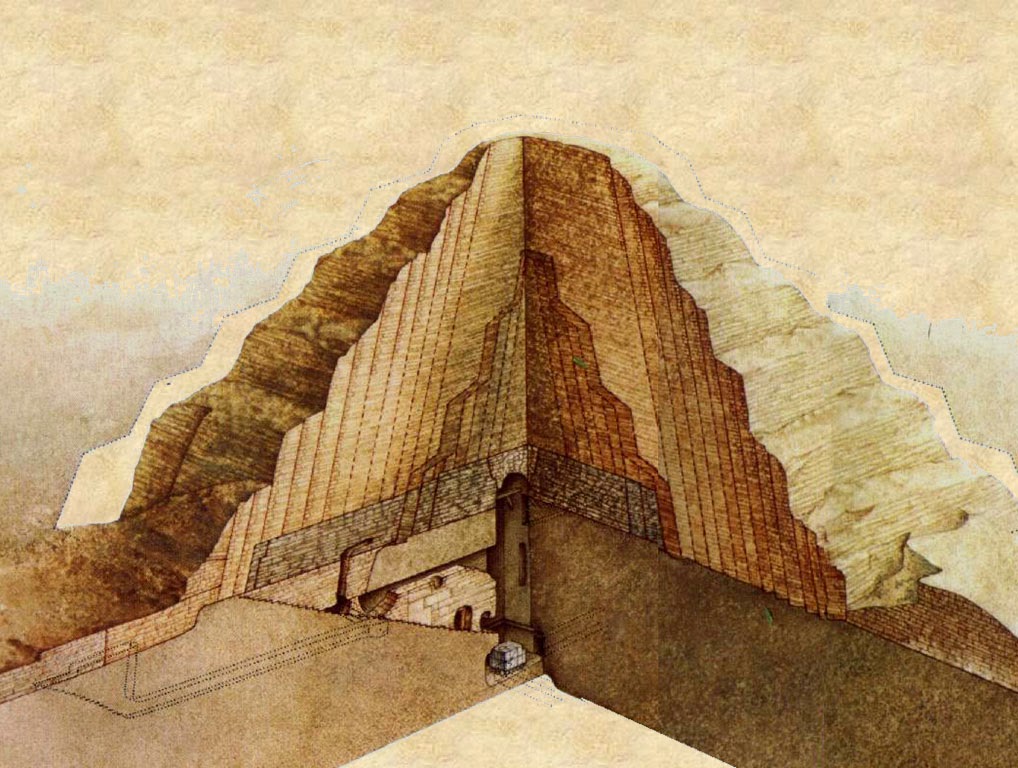 Of course, neither Djoser nor anyone would have noticed this puzzle-like solution, as the limestone blocks that made up the platforms of the pyramid were covered with granite, giving stylistic unity and homogeneity to the monument. 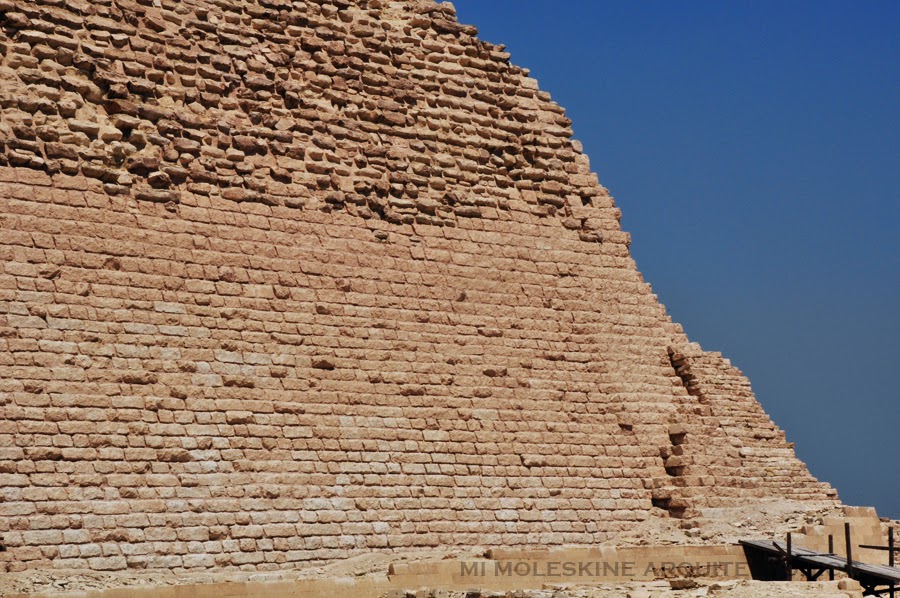 I can imagine the joy of Djoser when he saw his tomb completed around 2650 BC.  With its 62 meters it was not only much higher than any previous tomb, but its step form stimulated the idea of ​​ascension into heaven and the connection with the afterlife. Moreover, the pyramid meant the realization of two paradigmatic Ancient  Kingdom funerary styles: the house type and the type burial mound, which were typical of the settlements of Upper and Lower Egypt respectively. When combined in the pyramid, the architecture of the royal tomb became a symbol of the two components of the Egyptian state. In addition to its impressive size, the pyramid contained a maze of passages and an innovative system for the grave could support the weight of such a huge structure. 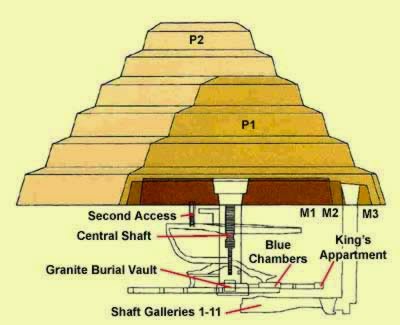 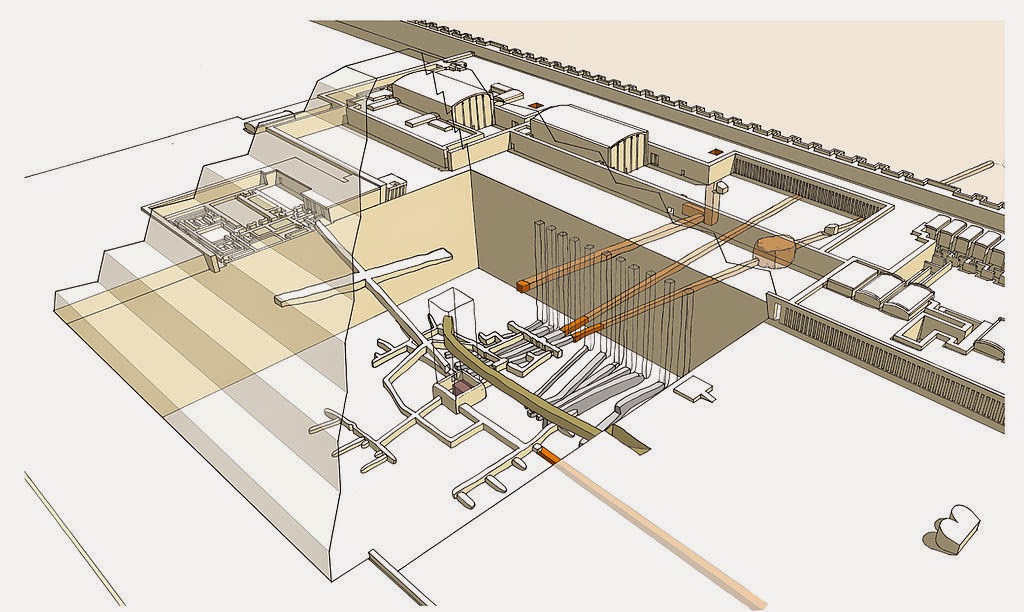 THE COMPLEX OF DJOSER 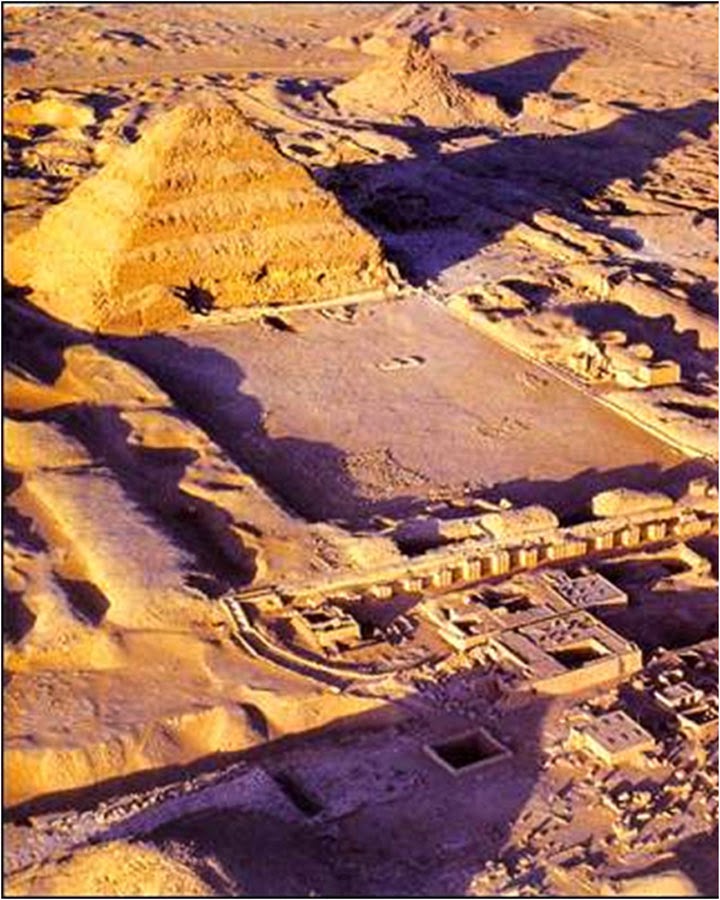 The royal funerary complex is surrounded by a niched wall, enclosing a huge compound of 277 x 544 meters, which is an imitation of the mud-brick wall that surrounded the residence of Pharaoh in Memphis, the aim being to provide the king with a continued use of his palace in the afterlife. For this reason many of the buildings are solid, massive structures, without any space or room inside and lacking any particular function. 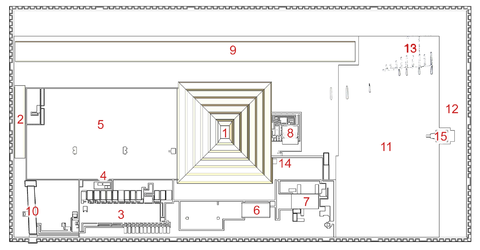 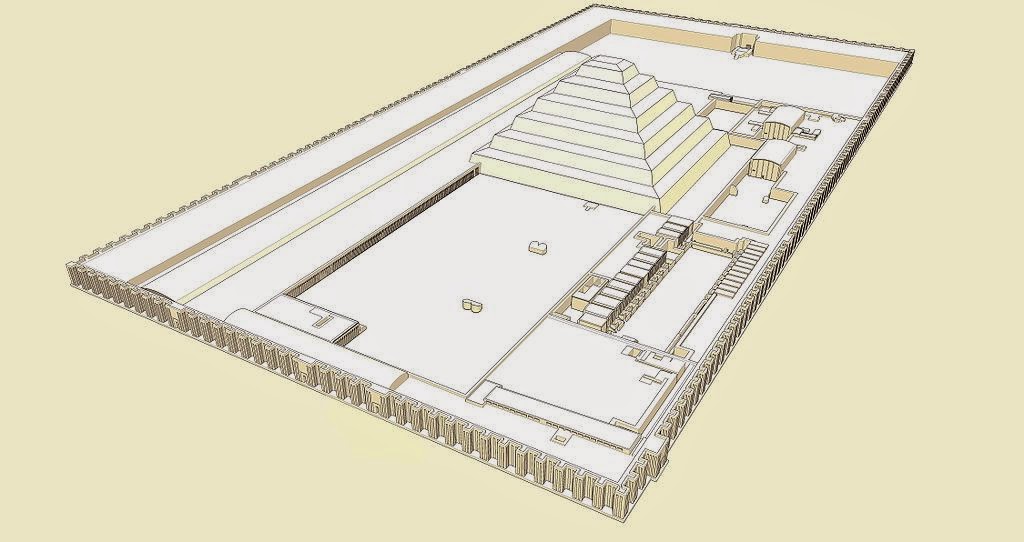 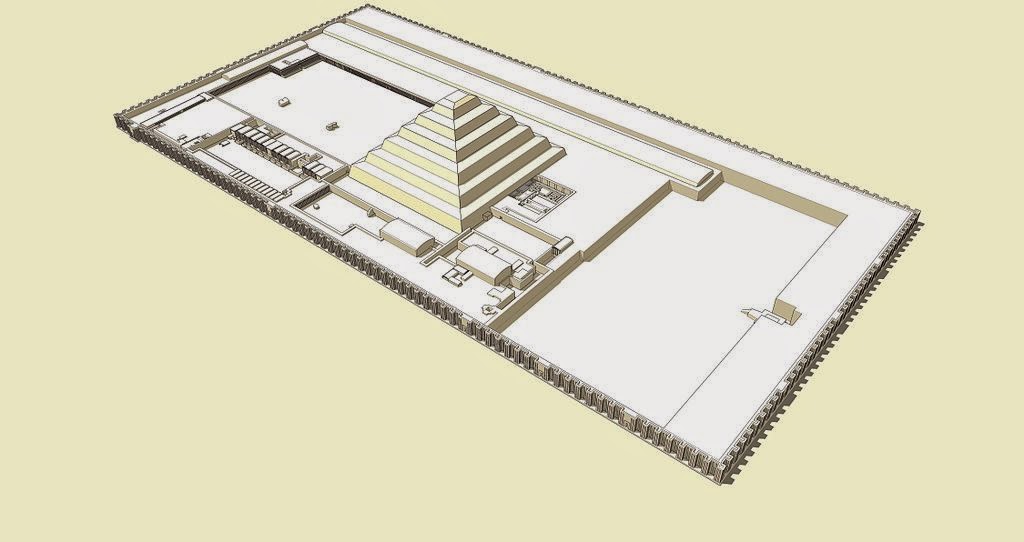 The large square in front of the pyramid is a spatial typology that seeks to highlight the scale and monumentality of the structure. It is a resource used in other cultures' pyramis, distant in time and space from Egypt, such asTeotihuacan, the Maya and the Moche. 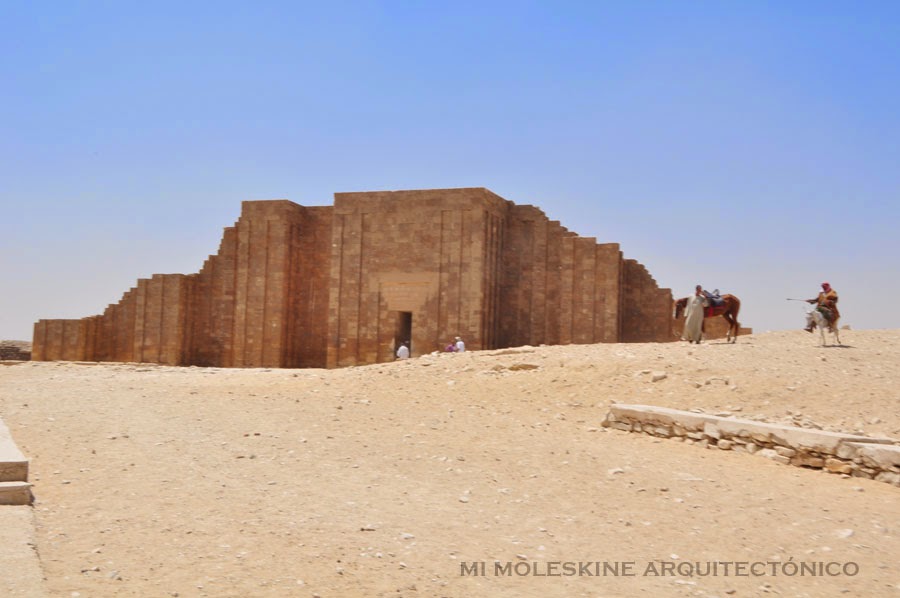 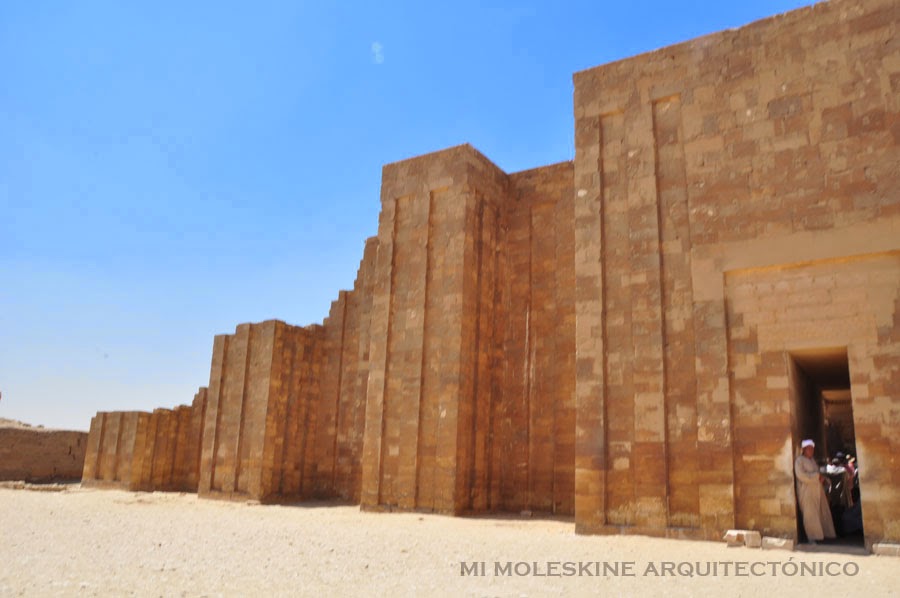 Only one of the 13 false doors of this wall leads into the square, through a passage, whose roof was supported by beams which in turn were supported by a colonnade. These were the first bearing columns in history, and apparently Imhotep was not sure that  they would work, as he joined them in pairs and filled the space between them. This experience would be the basis for future free-standing columns in Luxor, Karnak, etc. In Saqqara columns were rounded to have the appearance of palm trees. 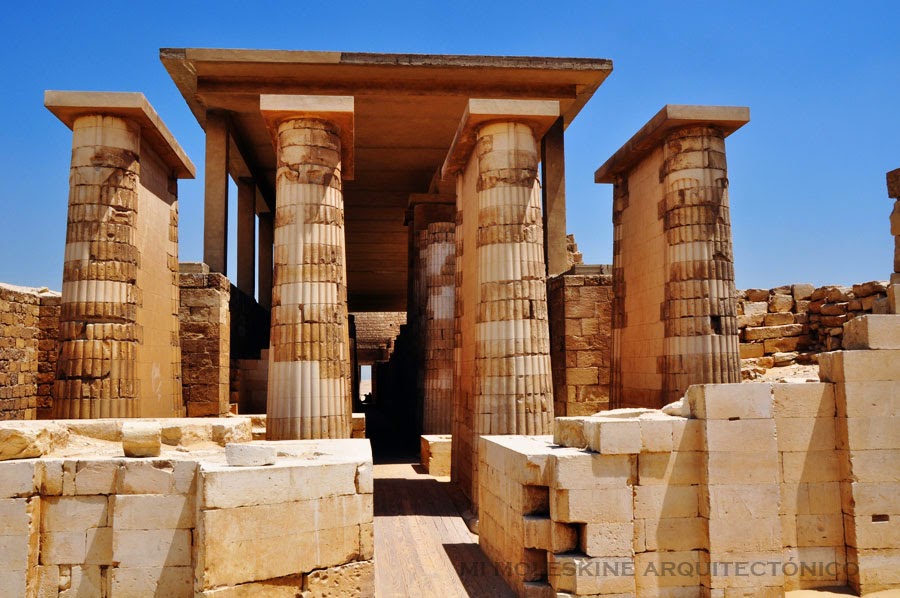 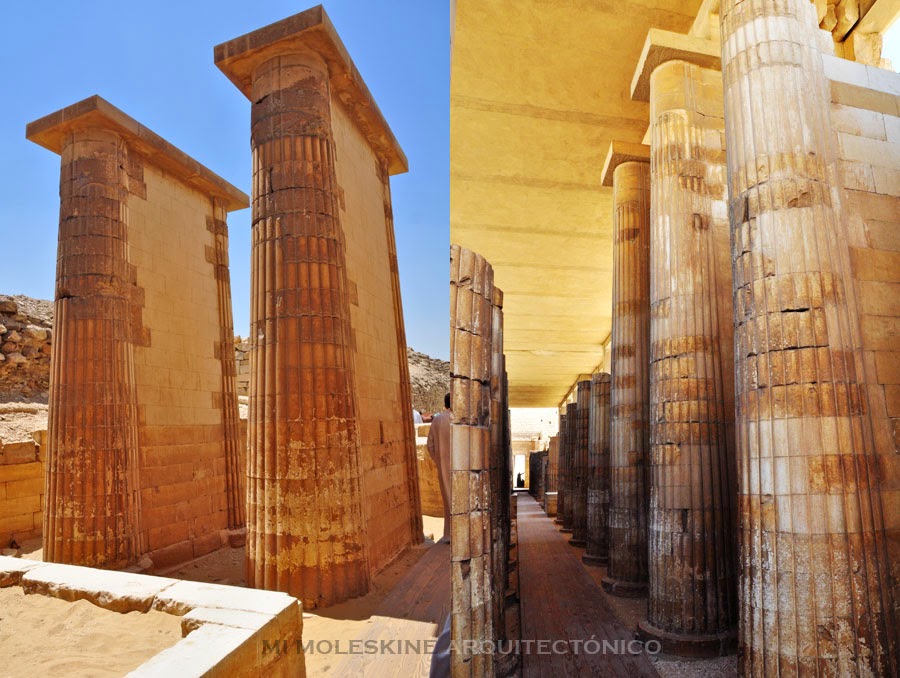 They were built by superimposing individual blocks and they have a wider base to better distribute the loads from the roof. 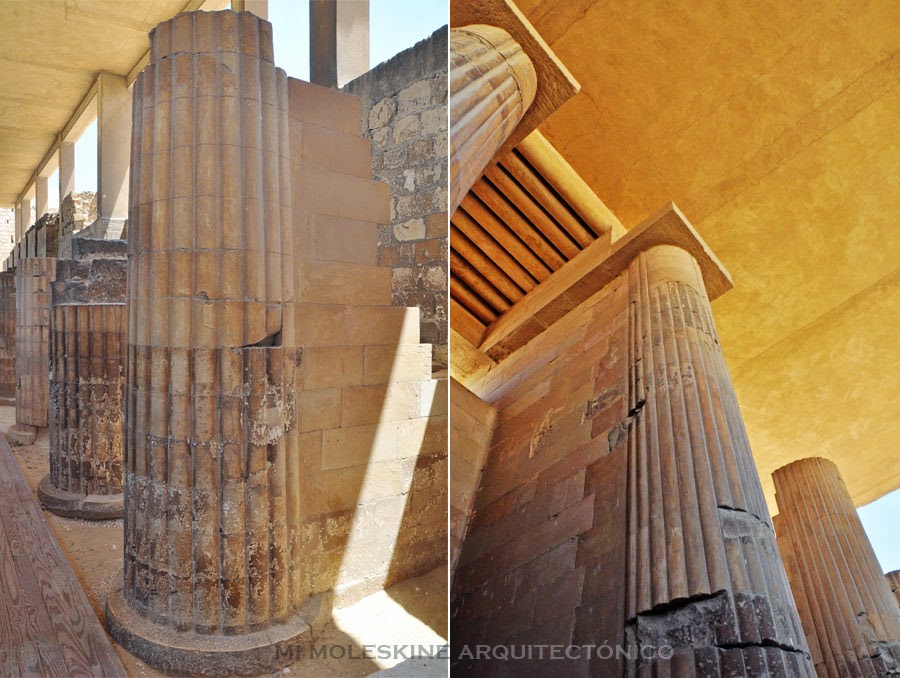 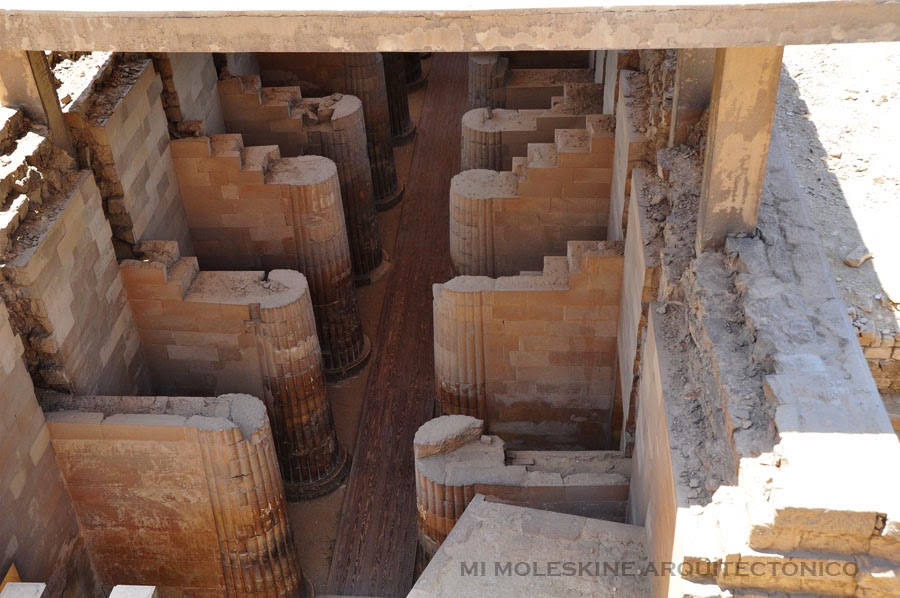 After touring this passage in the semidarkness, the visitor dazzled by accessing a large square where the Heb Sed took place, a ceremony in the twentieth or thirtieth year of the reign of the pharaoh, a sort of royal jubilee in which the monarch was "blessed" by the gods after participating in religious ceremonies and a series of physical demonstrations. To do this, a shrine (whose shape resembled the desert tents), welcomed a procession and a series of ceremonies officiated by the High Priest. After the ceremony the Pharaoh was crowned again carrying the symbols of Upper and Lower Egypt. 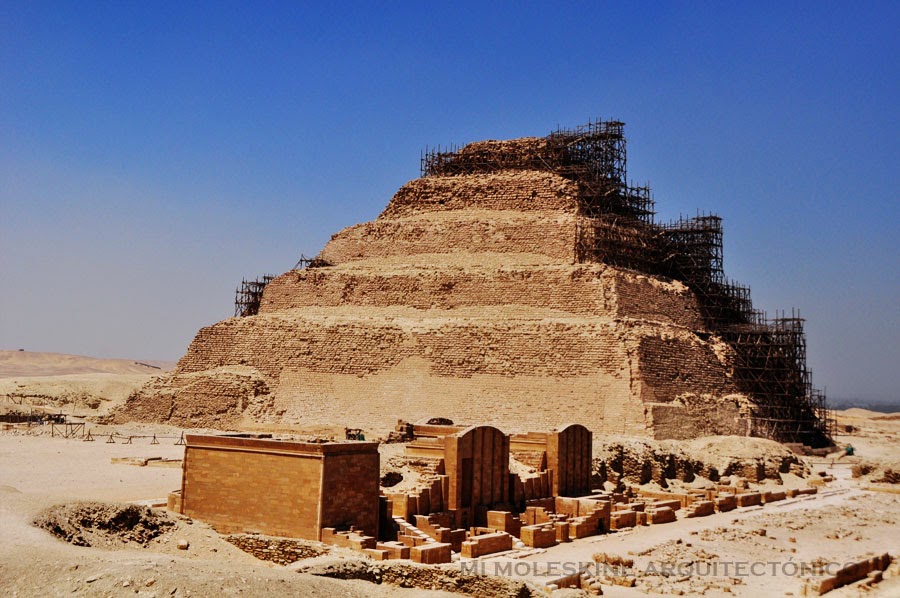 Currently a combined team of Egyptian and British experts is undertaking a process of restoration and structural reinforcement of the pyramid, especially at the burial chamber which is in danger of collapse. The project aims to introduce a set of steel bars which would increase the stability of the rocks that make up the camera coverage of the gravestone. However, since the drilling itself could cause the collapse, it was necessary to first clean the inside of the camera and then install a scaffold containing a sort of air mattresses, which may support the rocks in case  they collapse. The project has been carried out despite very difficult logistical and political conditions, due to the recent outbreak of a revolution. 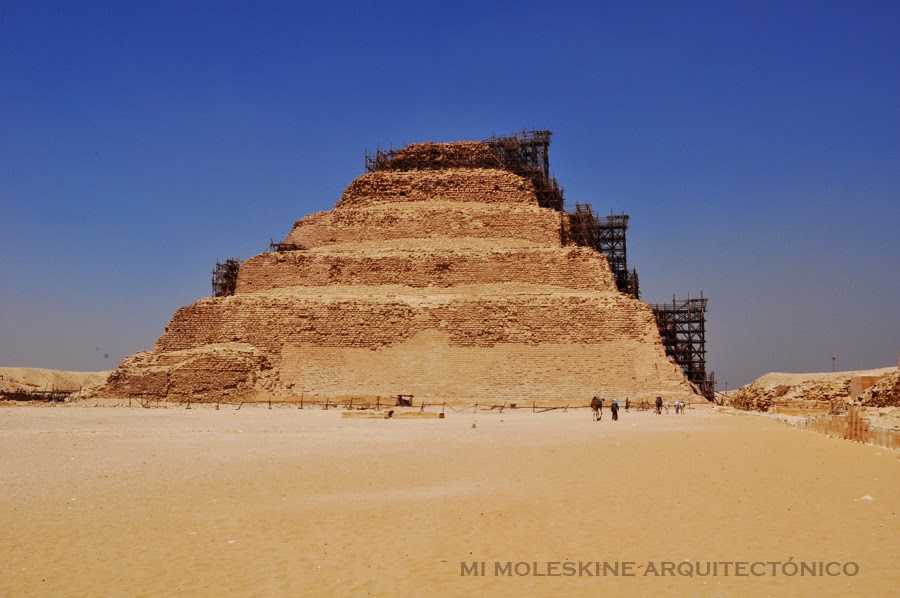 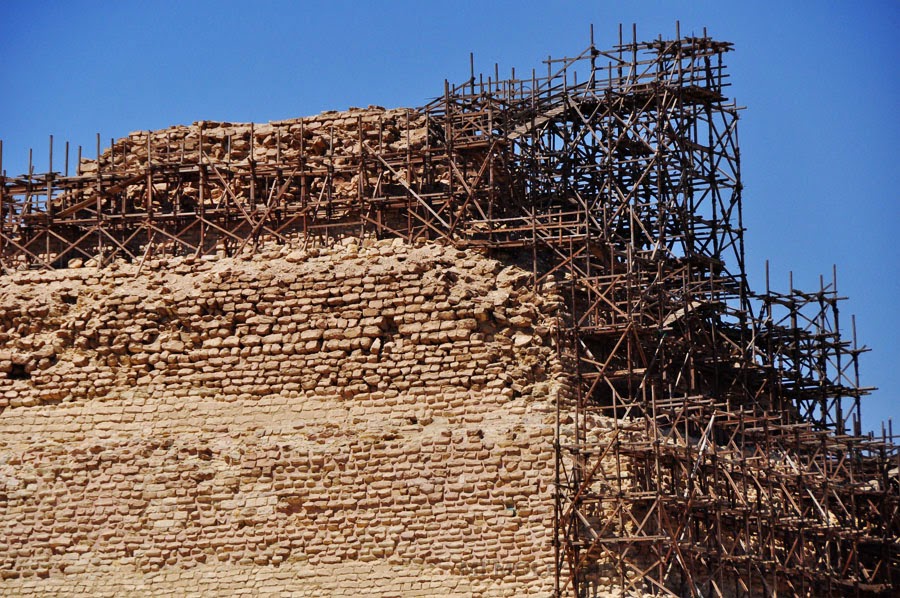 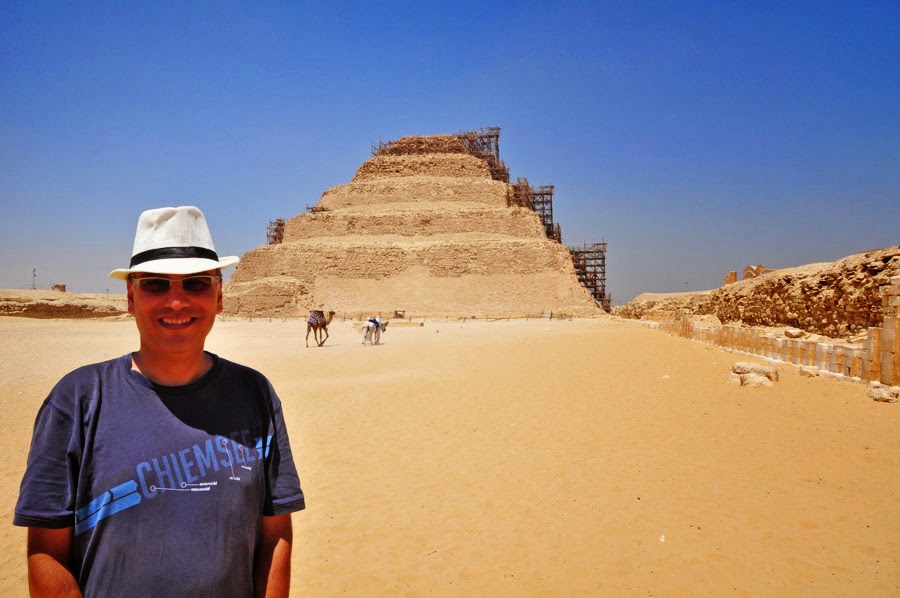 Posted by Carlos Zeballos at 11:12 AM