WATERFRONT IN TEMPOZAN (I): OSAKA AQUARIUM 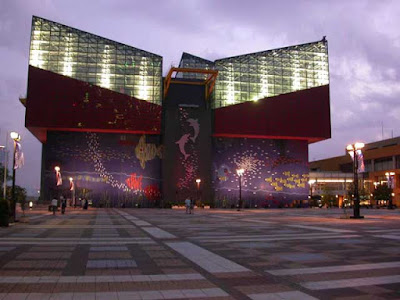 
Many cities were founded in a close relationship with rivers, seas or lakes. After industrialization, that link weakened, due to pollution, overcrowding or lack of interest from  their inhabitants. The so-called "waterfront development"  is a contemporary attempt to return that relation water-city-to the population.

The waterfront area of Tempozan in the Osaka Bay (1990) is a well known sea side intervention in Japan. It consists of an aquarium, a museum, hotel and entertainment facilities. In this entry, I will focus on the Osaka Aquarium or Kaiyukan, one of the largest aquaria in the world. In the next post I will be commenting on Tadao Ando's Suntory Museum. 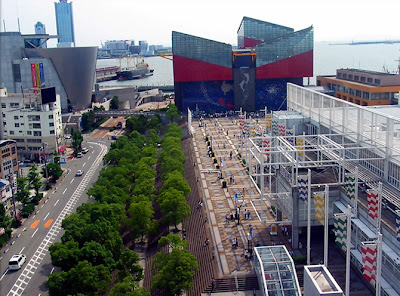 In designing an aquarium many specialists converge in an interdisciplinary work par excellence. From architects to design its urban impact and internal space, engineers who conceive resistant structures and determine the thickness of acrylic tanks (in a highly seismic zone), interior designers, who contribute to offer the visitor an educational and memorable experience, to expert biologists, ecologists, chemists and other scientists who determine the precise characteristics of each habitat required by every species on display. About 20 companies worked for 2 ½ years to carry out the Kaiyukan Aquarium.

The result was a massive building that sits in front of a plaza that serves as an urban atrium. Such massiveness, in some degree necessary due to the function that houses, appeared to be formally fragmented,
slightly offsetting the corners of the cubic volume in both plan and elevation. 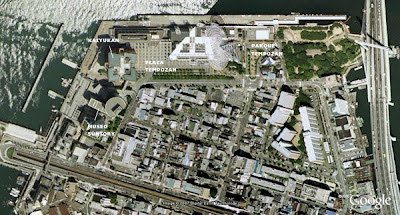 
Kaiyukan literally means "Playing in the Sea Pavilion" and that is precisely the conception of Chermayeff, Sollogub and Poole, American architects in charge of the project. The design explores the concept of playfulness from the very unorthodox conception of building volume, a colorful glass topped box whose corners have been fractured as if it were a Rubik cube. 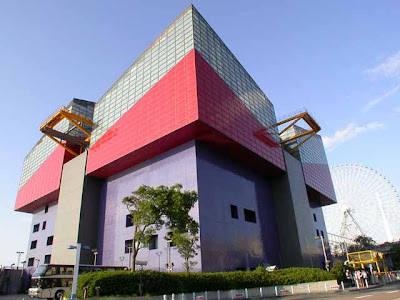 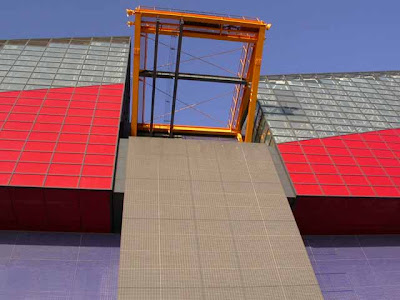 Beyond the external volumetric treatment or the controversial colorful mosaic façade, the aquarium stands by the careful design of both the exhibition areas as well as the dramatic path that connects these recreated ecosystems. 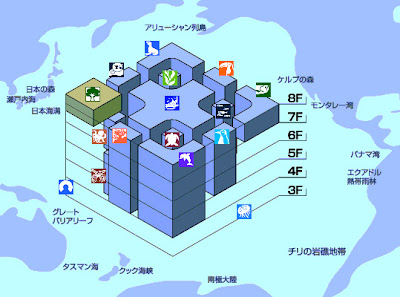 General scheme of the aquarium. Beginning  in the Japanese forests (upper left area) the visitor follows a spiral that connects the exhibition halls.

The Kaiyukan was designed to awaken an interest about the amazing biodiversity that lives in the Pacific Ocean. Based on the Gaia Hypothesis, which proposes that the Earth is a living organism in which all creatures and volcanic activity are interrelated, the Aquarium presents a sample of life at sea in the Ring of Fire in 15 vast rooms. 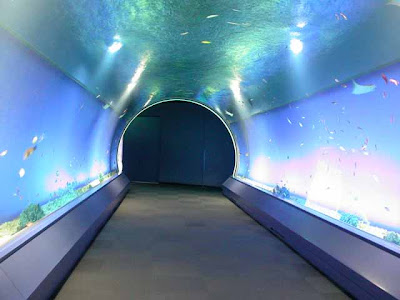 After crossing an impressive entry hall 11 m long, surrounded by water, Chermayeff included an escalator that transports visitors to the highest and more illuminated point, which houses a Japanese forest. 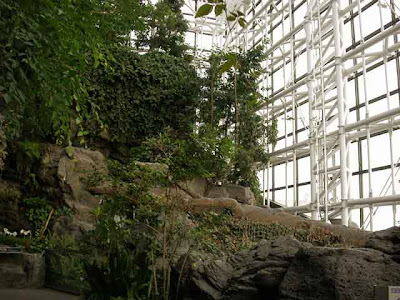 From there, a spiral circulation descends, connecting the various display areas, and increasingly entering into the seabed habitats. The lighting and interior design help to provide a experience between the visitor and the colorful, vivid and diverse fauna and flora displayed, including many examples from the equatorial forests to the Antarctic. The various tanks corresponding to each of ecosystems are shown in clear and sequential order.

In the photos, I show only two of the most impressive specimens: a stingray and some giant Japanese spider crabs, (note the size of people in the back) 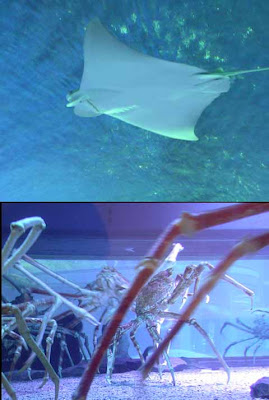 Thanks to the fine interdisciplinary work mentioned earlier, it was possible to reproduce the ideal conditions that allow these delicate species, survive and reproduce. 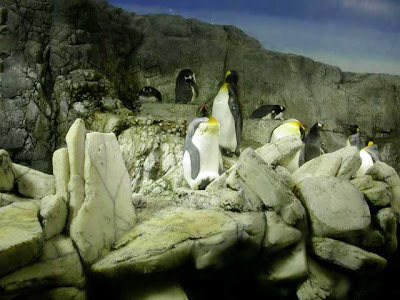 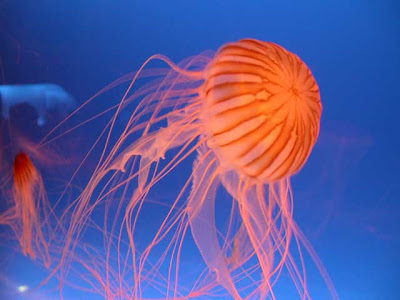 For a video of the inside of the aquarium, click here


In an impressive technical display, the Kaiyukan Aquarium succeeds in amalgamating entertainment and education, research and culture in an innovative and functional design. From an urban point of view, the colorful, massive and aggressive volume of the aquarium contrasts with that of the Suntory Museum, designed by renowned architect Tadao Ando . 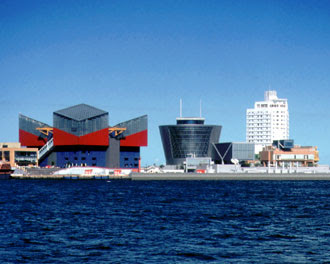 I will comment on that building in the next post. Meanwhile I leave you with a sunset Osaka Bay, seen from the Tempozan square. 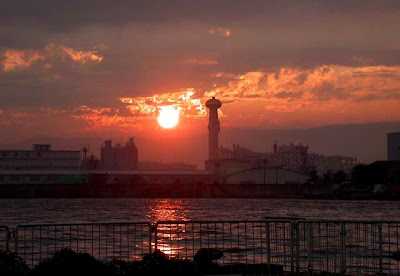 Posted by Carlos Zeballos at 4:00 PM