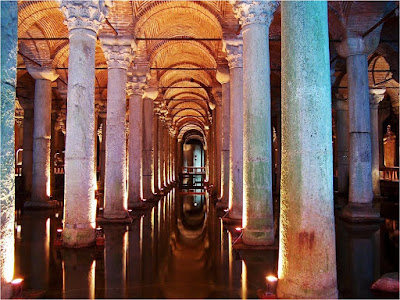 A surreal atmosphere surrounds the underground Cistern Basilica, also known as Yerebatan Sarnici in Istanbul, Turkey. The underground forest of columns is reflected in the water, resembling an Escher picture . 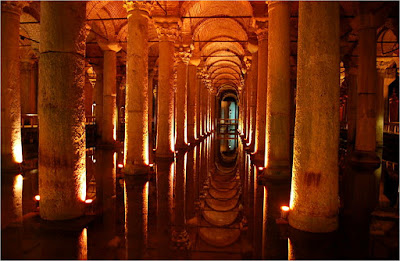 A visit through the walkways located over the water reveals a unique combination of engineering and art worthy of a palace, which lies in the basement of the former capital of the Eastern Roman Empire (that's why the monument is also known as Yerebatan Sarayi, the Sunken Palace). 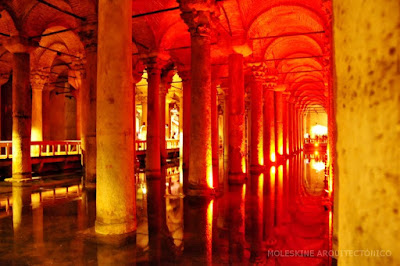 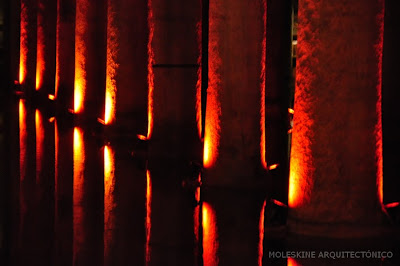 Located about 100 meters from the famous Hagia Sophia, the complex receives its name from an ancient basilica stood on it. It was built by the Emperor Constantine (272-337) and then enlarged by Justinian (527-565) in 532, in order to provide water to the imperial palace and to the city of Constantinople in general, in case it would be  besieged. The water tanks that supplied the cistern was brought through aqueducts from a fountain located 19 km from the city. 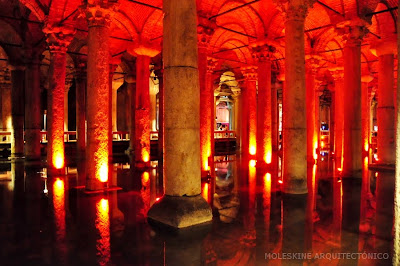 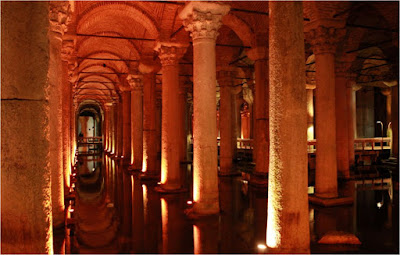 In fact the cistern remained hidden after the city fell conquered by the Ottoman Turks in the fifteenth century and was rediscovered by the Dutch traveler P.  Gyllius, between 1545-50. He heard stories of people who drew water and even fish  from wells located in the basements of their houses. 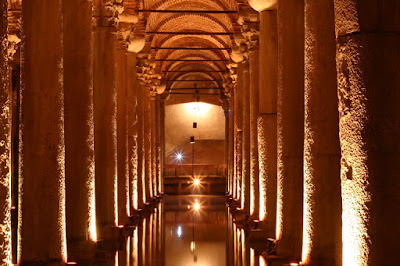 Armed with a torch Gyllius delved into the cisterns and in really difficult conditions carried out the first survey of the monument. He later published his discovery, attracting many travelers and scientists fascinated by the wonder of the cistern. 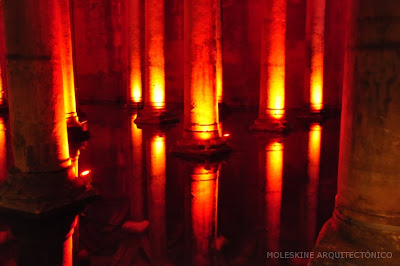 
The cistern occupies a rectangular area of ​​140 x 70 m, surrounded by walls 4.8 m thick.The construction technology, based on brick and concrete, is similar to that developed in Hagia Sofia. 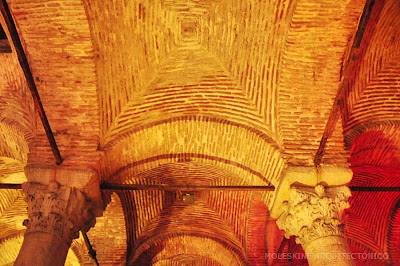 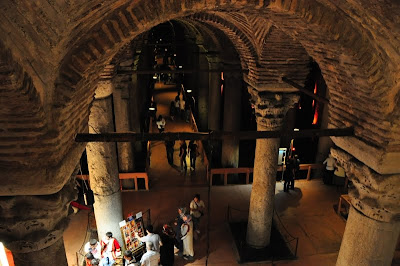 The roof of cross vaults rests on 336 columns that reach a height of 9 m, arranged in a gridiron layout, that is 12 rows of 28 columns each. 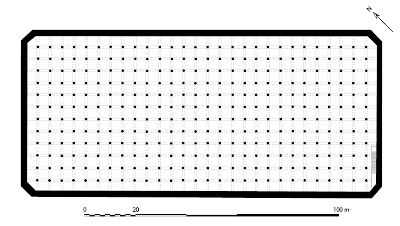 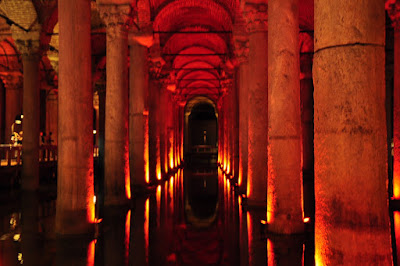 Some of them have Doric and Corinthian capitals, but some others have really unusual ones, regarding both the form of capital as well as the shaft of the column. 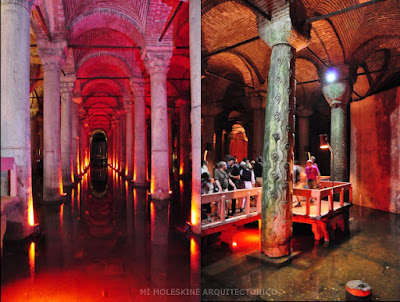 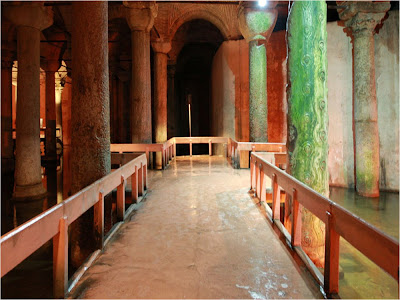 The marble of which the columns are made also differs from column to column. According to our guide, this was because  many of the elements were reused from existing structures. 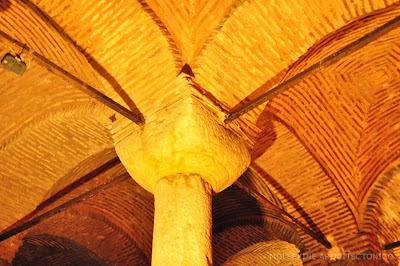 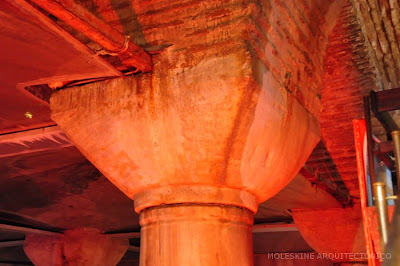 In its 9800 m2 of surface, the tank has a capacity of 100,000 m3. The floors are made of brick and covered with mortar to ensure the impermeability of the cistern. 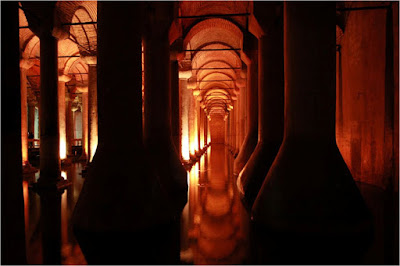 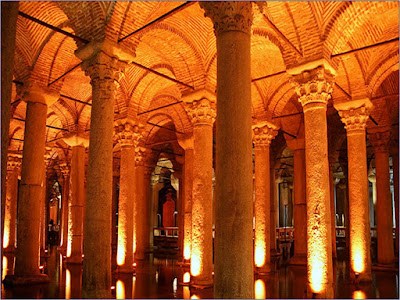 However, as we walked  among the columns, in some places drops of water  that seeped  through the roof fall over our heads, which is due to a park which is currently located on top of the cistern. 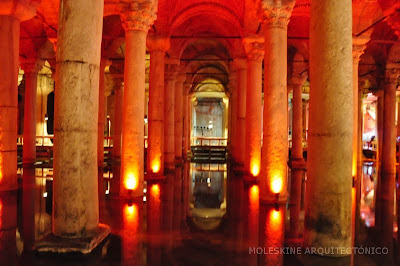 
One of the aspects I found most striking was the presence of two columns whose base represented the head of Medusa, the Gorgon guardian with that hair in the form of snakes which, according to Greco-Roman mythology, turned to stone to those who looked at her. 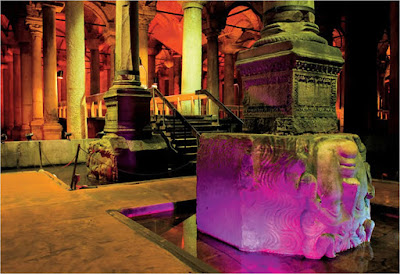 I was surprised to find these magnificent sculptures used as bases of two columns, one of them arranged upside-down and the other one on the side. 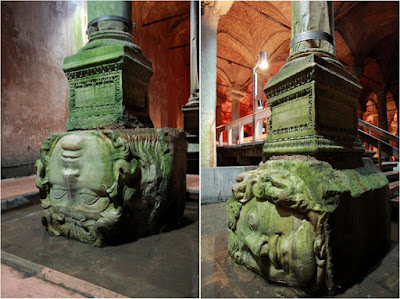 Apparently the emperor's message was clear: the pagan gods were dead, and therefore he intended to "crush" them under the columns, and for that reason  in the vicinity had engraved a cross. Other sources  indicate that the faces were placed in that way as not to "petrify "people who looked at them.  Poor Medusa ...  first she was beheaded by Perseus and then her head was used as the base of an underground column by Justinian. 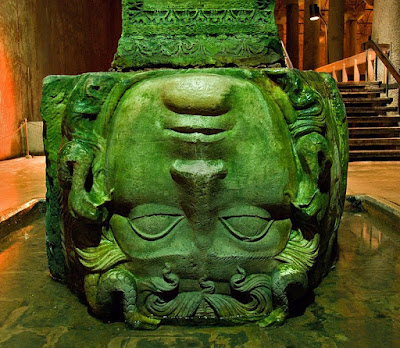 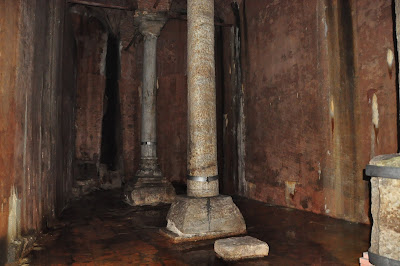 In front of the Medusa   a cross etched in the column can be seen.

The complex has undergone three restoration processes. La primera fue hecha por los otomanosen 1723, bajo el reinado del sultán Ahmet III. The first was carried out by the Ottomans in 1723, under the reign of Sultan Ahmet III. The second one was made in the nineteenth century under Sultan Abdulhamid II, covering one third of the tank with brick and concrete to prevent collapse. The third one was carried out between 1985-87, when  50,000 tons of mud and sediment were extracted from the complex floor.
Today lighting effects and music  have been added to the gentle murmur of water, accompanied by the colorful presence of ornamental fish. 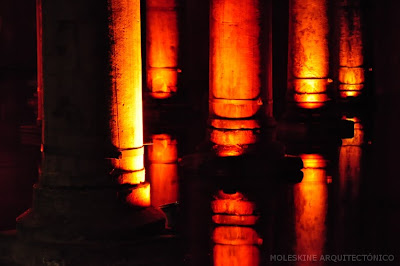 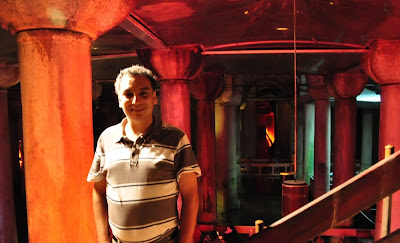 Posted by Carlos Zeballos at 5:42 AM